Assessment of Static Steadiness and Dynamic Stability at Various Stages of Healing of a Grade 2 Medial Collateral Ligament Tear: A Case Report
Previous Article in Journal

The Interference of Arabic Prepositions in Emirati English

Background: Renewed measles outbreaks in recent years indicate that despite the routine availability of vaccines for a disease that is considered contagious, dangerous and deadly, many anti-vaccinationists do not vaccinate their children, which consequently endangers public health. This study aimed to investigate the factors that influence mothers to vaccinate their children, and whether the Health Belief Model (HBM) could predict compliance or non-compliance. Methods: This was a quantitative correlational research, using a 40-item questionnaire administered to 181 mothers in Israel. Results: The findings indicated two main factors that affected mothers’ intention to vaccinate their children against measles: first, their perception of the vaccine’s advantages, and second, their perception of the severity of the disease. It was also found that the HBM variables significantly affected the intention to administer vaccines. Conclusion: Consequently, raising public awareness of the vaccine’s advantages and importance to preventing mass infection, as well as attempts by the health system and practitioners to understand the motivations of anti-vaccinationists (including health beliefs and cultural sensitivities) could significantly increase the percentage of vaccinated children, and eradicate the measles epidemic.
Keywords: measles vaccine; intention; perception; maternal; Health Belief Model (HBM) measles vaccine; intention; perception; maternal; Health Belief Model (HBM)

Following outbreaks of measles epidemics in recent years, especially the incident connected with Disneyland in early 2015, and widespread outbreaks in Ohio in 2014 [1], the arguments over children’s vaccination have become a serious problem in public health [1,2].
Measles is a highly contagious infectious disease caused by the (red) measles virus. Symptoms usually develop 10–12 days after exposure, during which time the virus multiplies in the upper respiratory tract, and lasts 7–10 days. Initial symptoms typically include fever, cough, runny nose, and inflamed eyes. A rash typically begins 2–4 days after the start of symptoms, spreads from the head downwards (neck, arms, legs), and disappears in the same order [1]. According to the World Health Organization (WHO) [2], most measles-related deaths are linked to complications that develop during the disease. Serious complications are more common among children under the age of 5 or adults over 30, and may include blindness, encephalitis, severe diarrhea and dehydration, ear infections, severe respiratory infections, mainly among patients with a vitamin A deficiency or a repressed immune system (such as AIDS patients).
The treatment of measles is non-specific, except palliative treatment of symptoms, and it takes time until the immune system overcomes the virus. WHO recommends vitamin A to treat measles, consisting of two doses of 50,000 IU for infants under the age of six months, and 100,000 IU for infants up to a year old, and 200,000 IU for children over one year old. Vitamin A additives are considered effective in reducing measles-related mortality from various causes including diarrhea [3]. Measles is highly contagious, so that if one is sick, nine out of ten people in their close vicinity will probably be infected if they are not protected [1,2,3,4].
The US Centers for Disease Control and Prevention (CDC) reported 1249 new cases of measles in the US between January and September 2019—the highest annual number since 1992. According to WHO, 112,163 children and adults were infected in Europe in 2019, and in 2018, 28,124 cases of measles were reported [4], in contrast to 2017, when 23,927 cases were reported. According to the Epidemiology Division of the Ministry of Health in Israel, the annual number of measles cases in 2019 was 1427, in contrast with 2018, when there were 2872 reported cases. WHO considers measles to still be one of the main causes of child mortality throughout the world, despite the existence of a vaccine that actually prevents it [5].

The vaccine against measles consists of an attenuated live virus administered via a subcutaneous injection, and is a trivalent vaccine that acts against Measles, Mumps and Rubella (MMR). In some countries, the vaccine acts against four diseases: Measles, Mumps, Rubella and Varicella (MMRV) [6]. The vaccination is administered in two doses. The effectivity of the vaccine is 95% after the first dose and 99% after the second dose. Serological and immunological tests have shown that protection following the vaccination is long term, probably for life.
A single vaccine—only against measles—has been administered in 44 African countries and 24 more around the world. The MMR vaccine is common in more than 90 countries, primarily in Europe and North America. From a public health perspective, measles is considered the most important of the three (or four), because of its high contagiousness and fatality rates. In fact, the availability of an effective vaccine affords control over the disease, and even its prevention and eradication, which should be the main goal.
The measles vaccination is one of the first and most effective in the vaccine pool, and is responsible for a dramatic and significant decrease in infant mortality. During the years 1990–2008, 23% of children’s deaths were prevented following measles vaccinations. Without the vaccine, over ten million children would have died worldwide in the last decade because of measles [7]. This is the most effective means available to prevent measles morbidity. With an average of 99% effectivity, for individuals vaccinated with two doses who nevertheless contract the disease (3%), the disease is expected to be milder [8].
In Europe, as of 2017, the measles vaccination rate was 90%. In the USA, the rate for 2016 was 96% [2]. In Israel, a 96% measles vaccination rate was reported for 2018 [8,9].

The Measles Vaccination Program in Israel

The National Health Insurance system in Israel legally went into effect in 1995. Public health services are provided by the Ministry of Health, including routine free-of-charge vaccinations during childhood. The measles vaccine is part of the routine vaccinations, and is administered in two doses—at the ages of 12 months and 6 years [9]. The vaccine is a combination serum that acts against four diseases: Measles, Mumps, Rubella and Varicella (MMRV) or a combined serum against Measles, Mumps and Rubella (MMR), and has been administered in Israel since 1987 [7,8,9].
It is not possible to get vaccinated solely against the measles virus in Israel [8]. If the routine vaccination is not possible, for example among immunosuppressed individuals or infants younger than one year old, and if there was exposure to the measles virus, an active vaccine can be administered within 72 h, or composed of immunoglobulins can be administered within six days (for people with counter-indications for the active virus) [10].

The theoretical model upon which this study is based is the Health Belief Model (HBM) [11], which was developed by Rosenstock in 1974 [12]. This is a social-psychological health behavior change model developed to explain and predict health-related behaviors, particularly in regard to the individual’s uptake of health services. Previous studies among various groups have shown that this model can explain and predict health-related behaviors [13,14,15,16,17]. The basic premise of HBM is that an individual must be in a state of psychological willingness to make a health behavior change, i.e., to take action to prevent a disease. Vaccine decision-making can be explained by the HBM, which conceives vaccination behaviors as an output of an individual’s perceptions of both a disease and its related vaccine [16,17]. Studies of compliance with other routine vaccinations investigated the model’s elements in relation to predicting vaccination, and some have been found to affect the decision to receive vaccines. Previous studies have also indicated that by means of understanding the model’s elements, health-related behaviors could be explained, for instance in the field of vaccinations [13,14,16,17,18,19,20,21,22].
The HBM includes several categories: perceived severity of the medical problem, perceived susceptibility to illness, perceived benefits of health-related behavior, perceived barriers and downsides of health-related behavior, and health motivation.
We must understand the issue of maternal response to measles vaccinations in depth, and thus develop programs to increase the vaccination rates in the population. Understanding the reasons and motivations that underlie the attitudes of mothers who refuse measles vaccination could facilitate appropriate planning to cope with the problem, and devote the necessary resources to eradicate the phenomenon for the greater good.
The aims of the current study were to examine (1) the factors that influence mothers to vaccinate their children with this routine vaccination, and (2) whether the Health Belief Model can predict maternal response to measles vaccinations.

This is a quantitative, correlative study. The Health Belief Model [11,12] was used as the theoretical framework. The sample was a random sample of 181 mothers of young children in Israel. Data collection were using a self-reporting questionnaire, based on the Health Belief Model. Data were collected between October to December 2019.

The research tool was a 40-statement questionnaire, consisting of four parts:

It is mandatory that the health systems and health care professionals raise public awareness—with emphasis on the disease’s severity and the vaccine’s advantages and importance—to prevent contagion and morbidity of measles. This could significantly increase the immunity rates. New ways, which address health beliefs and cultural sensitivities, must be found to increase compliance with the vaccination among various populations. Correct ‘marketing’, increased awareness, and understanding the reasons for the refusal to vaccinate could facilitate better planning to deal with the problem, and to allocate the appropriate resources to eradicate the problem.

As an exploratory research project based on a purposive sampling strategy, the primary limitation of this study is the small sample size. In addition, the data were obtained through self-report questionnaires, which makes the answers highly subjective. The main limitation of this study is that test population was rather homogeneous, with the vast majority of subjects being willing to vaccinate their children; therefore, all the correlations reported by the authors may have limited value. Additionally, the study examined mothers’ intentions to vaccinate; perhaps examining fathers’ intentions would have yielded different results. Furthermore, this study focused primarily on the measles vaccine; investigation of all routine vaccinations or other individual vaccines might have produced different results.

The study approved by the Ethics Committee of Ruppin Academic Center (October 2019). 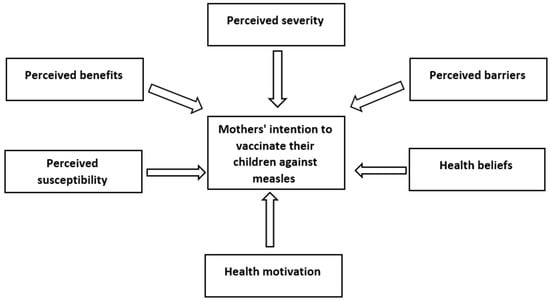 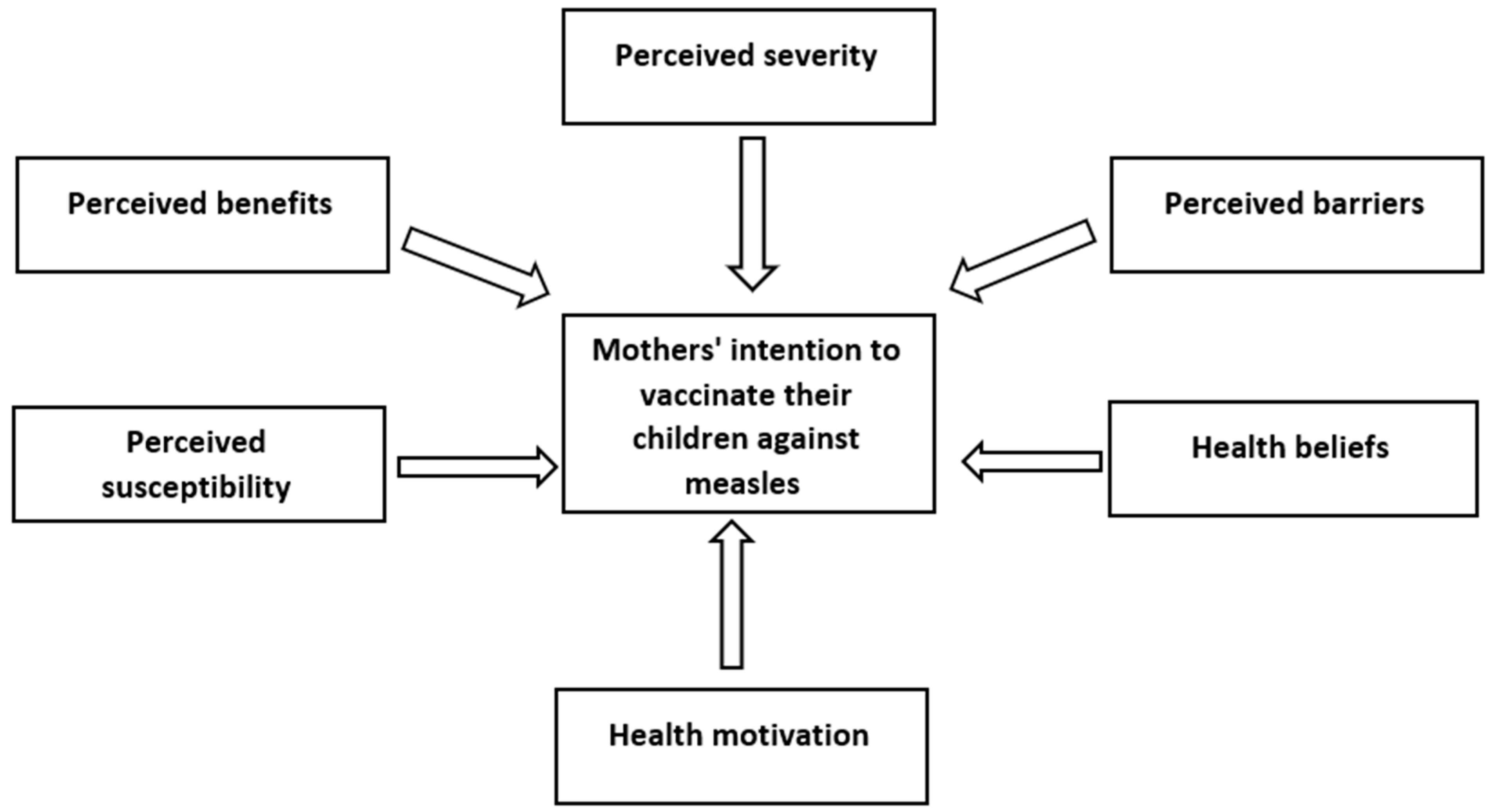