Towards an Even More Spatially Diversified City? New Metropolitan Population Trends in the Post-Economic Crisis Period

After the deep economic crisis that began in 2008, in 2014, Spain started to show signs of recovery, entering the so-called “post-crisis” period. Though it has not yet reached the entire population, economic improvement has had a positive impact on the real estate market, economic activity, and employment. Residential mobility has also increased, but flows have become more unstable and complex. The direction of these flows, the reasons for moving, and the ages and socioeconomic categories of migrants have diversified. These complex “new mobility” patterns are reconfiguring the spatial distribution of the population in Spanish urban areas. On the basis of Continuous Register (Padrón Continuo) microdata, this paper primarily aims to study population changes in the 69 Spanish functional urban areas (FUAs) defined by the National Institute of Statistics (INE)/Eurostat, focusing on their population growth or decline in their centers and peripheries during the crisis (2011–2015) and post-crisis (2015–2019) phases. Then, the paper analyzes the five major Spanish metropolises (Madrid, Barcelona, Valencia, Seville, and Bilbao) in greater depth. The findings confirm the hypothesis that, during the post-crisis period, the population growth of cores and rings and thus the spatial distribution of urban inhabitants have been changing, resulting in the growing demographic heterogeneity of Spanish urban areas that are diversifying both internally and compared to each other. View Full-Text
Keywords: population growth; spatial reconfiguration; large urban areas; post-crisis period; Spain population growth; spatial reconfiguration; large urban areas; post-crisis period; Spain
►▼ Show Figures 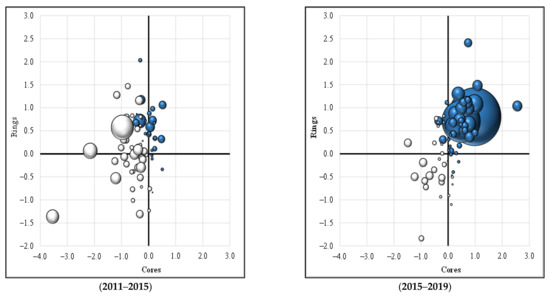