Rhizobia have two major life styles, one as free-living bacteria in the soil, and the other as bacteroids within the root/stem nodules of host legumes where they convert atmospheric nitrogen into ammonia. In the soil, rhizobia have to cope with changing and sometimes stressful environmental conditions, such as nitrogen limitation. In the beta-rhizobial strain Paraburkholderia phymatum STM815, the alternative sigma factor σ54 (or RpoN) has recently been shown to control nitrogenase activity during symbiosis with Phaseolus vulgaris. In this study, we determined P. phymatum’s σ54 regulon under nitrogen-limited free-living conditions. Among the genes significantly downregulated in the absence of σ54, we found a C4-dicarboxylate carrier protein (Bphy_0225), a flagellar biosynthesis cluster (Bphy_2926-64), and one of the two type VI secretion systems (T6SS-b) present in the P. phymatum STM815 genome (Bphy_5978-97). A defined σ54 mutant was unable to grow on C4 dicarboxylates as sole carbon source and was less motile compared to the wild-type strain. Both defects could be complemented by introducing rpoNin trans. Using promoter reporter gene fusions, we also confirmed that the expression of the T6SS-b cluster is regulated by σ54. Accordingly, we show that σ54 affects in vitro competitiveness of P. phymatum STM815 against Paraburkholderia diazotrophica. View Full-Text
Keywords: rhizobia; σ factor; RpoN; RNA-Sequencing; nitrogen; motility; type VI secretion system (T6SS) rhizobia; σ factor; RpoN; RNA-Sequencing; nitrogen; motility; type VI secretion system (T6SS)
►▼ Show Figures 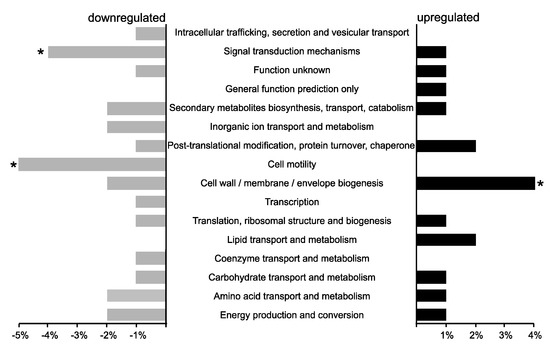