Intra- and Inter-Annual Variability in the Dissolved Inorganic Nitrogen in an Urbanized River before and after Wastewater Treatment Plant Upgrades: Case Study in the Grand River (Southwestern Ontario)

External nitrogen (N) inputs originating from human activities act as essential nutrients accumulation in aquatic ecosystems or it is exported elsewhere, where the assimilation capacity is surpassed. This research presents a multi-annual case study of the dissolved inorganic nitrogen (DIN) in an urban river in Ontario (Canada), assessed changes in N downstream of the largest wastewater treatment plant (WTP) in the watershed. Changes in the DIN effluent discharge, in-river concentrations and loads were observed comparing the intra- and inter-annual variability (2010–2013) before, during and after WTP upgrades. These upgrades reduced the ammonium concentration in the river from 0.44 to 0.11 mg N-NH4+/L (year average), but the N load in the effluent increased. In the river, nitrate and ammonium concentrations responded to seasonal variability, being higher during the low temperature (>10 °C) and high flow seasons (spring and spring melt). Among years, changes in the DIN concentration are likely controlled by the effluent to river dilution ratio, which variability resides on the differences in river discharge between years. This suggest that the increasing trend in the DIN concentration and loads are the result of agricultural and urban additions, together with reduced N assimilation, in addition to N loads responding to variable river discharge. Finally, we propose monitoring both concentrations and loads, as they provide answers to different questions for regulatory agencies and water managers, allowing tailored strategies for different purposes, objectives and users. View Full-Text
Keywords: dissolved inorganic nitrogen; effluent; seasonality; urban; wastewater dissolved inorganic nitrogen; effluent; seasonality; urban; wastewater
►▼ Show Figures 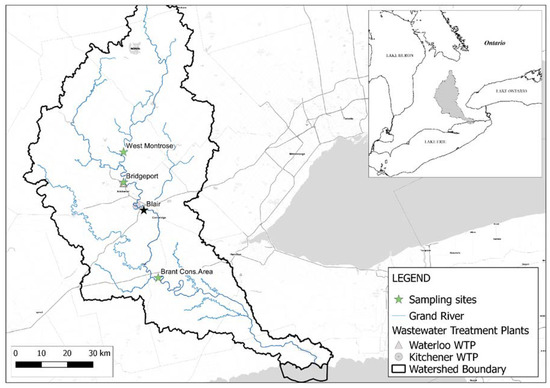