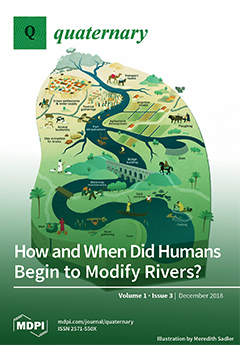 Cover Story (view full-size image): Rivers are central to landscape change and the Anthropocene because many human activities focused along waterways. The use of fire and gathering of plants and aquatic resources probably had little effect on rivers until crop cultivation intensified about 15,000 years ago in the Near East. Many plants and animals were domesticated worldwide after 10,700 years ago, leading locally within a millennium to organized agriculture with widespread legacy sediments, the first dams and irrigation, and mud-brick manufacture. Extensive irrigation systems and riverine settlements after about 6,500 years ago led to dams, urban water supplies, expanded groundwater use, river fleets, and alluvial mining, with major river engineering under the Chinese and Roman empires. Recent industrial effects have radically altered rivers worldwide. View this paper.
Previous Issue
Volume 1, September
Next Issue
Volume 2, March
We use cookies on our website to ensure you get the best experience. Read more about our cookies here.
Accept
We have just recently launched a new version of our website. Help us to further improve by taking part in this short 5 minute survey here. here.
Never show this again