River Systems and the Anthropocene: A Late Pleistocene and Holocene Timeline for Human Influence
Next Article in Special Issue

New Insights into the LGM and LG in Southern France (Vaucluse): The Mustelids, Micromammals and Horses from Coulet des Roches

Accurate species identification in fossil remains is a complex task but is a key component for developing good inferences on many, if not all, fundamental questions in macroecology and macroevolution. In the Quaternary, arvicolines are very abundant remains in archeological and paleontological sites in Western Europe and their identification is often based on the first lower molar. The common vole Microtus arvalis (Pallas, 1778) and the field vole Microtus agrestis (Linnaeus, 1761) are commonly found in those deposits. These two species are genetically and ecologically divergent. Nonetheless, their lower molars, on which species identification is done, exhibit a large morphological variation that can potentially lead to some confusion and misinterpretation. Moreover, molecular data suggest that present-day M. agrestis populations are a complex of divergent lineages, some of them being recognized nowadays as valid species. On the basis of extant populations representing a large part of the present-day geographical distribution of these two species, we developed a classification model based on geometric morphometrics of the first lower molar. Our statistical model was then applied on four fossil sites selected to evaluate the relevance of taxonomic determination found in species lists. The model using landmarks describing the overall shape of the first lower molar classifies the two species with the smallest prediction error together with very high individual posterior probabilities. The obtained classification is much better than those arising from shapes of any specific molar part such as the anterior loop, asymmetry or peculiar triangle shape. Discrepancies with expert classification on fossils suggest that existing faunal lists should always be considered cautiously for these two species. Our morphometric model provides a first step towards a rationalized way of revising past collections and expertise for future small mammal assemblages. It will thus help us better understand the paleobiogeographical expansion of these two key species in Quaternary faunas. View Full-Text
Keywords: geometric morphometrics; taxonomy; arvicoline; molar shape geometric morphometrics; taxonomy; arvicoline; molar shape
►▼ Show Figures 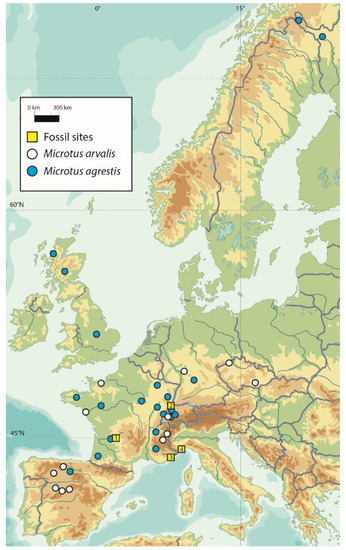