Ethnoarchaeology of Introducing Agriculture and Social Continuity among Sedentarised Hunter–Gatherers: The Transition from the Jomon to the Yayoi Period
Previous Article in Journal

Alternative Adaptation Strategy during the Paleolithic–Neolithic Transition: Potential Use of Aquatic Resources in the Western Middle Yangtze Valley, China

Early Grain Cultivation and Starting Processes in the Japanese Archipelago

This paper presents a specific examination of the introduction of grain cultivation and the processes of development in the Japanese Archipelago. In fact, no definitive archaeological evidence has been found that Jomon hunter–gatherers cultivated grain in the Japanese Archipelago; the earliest potential evidence of grain is a stamp mark of rice on the surface of a final late-Jomon, in about 11th century BC, pottery found at the Itaya 3 site in Shimane Prefecture. Current evidence indicates that the first grain cultivation was started by Jomon people who adopted irrigated wet rice cultivation that had arrived from the Korean Peninsula to northern parts of Kyushu, and gradually spread eastward thereafter. This study specifically examines four regions, including northern Kyushu, Kinki, southern Kanto, and northern Tohoku, in order to investigate the processes of grain cultivation initiation and spread. First, the years during which wet rice cultivation started in each region are estimated based on carbon-14 dating of earthenware types used during that period. Secondly, the timing of the spread of wet rice cultivation has been estimated based on carbon-14 dating of earthenware. Subsequently, differences in the periods between the initiation and dissemination of wet rice cultivation were estimated. Results suggest that dissemination took place over approximately 250 years in northern Kyushu, where wet rice cultivation first started. The time required for adoption decreased gradually as the trend moved eastward. It was estimated to have taken approximately 150 years in Kinki and 20–30 years in southern Kanto, taking place at about the same time. A factor, significantly contributing to such differences in timing and development processes among regions, was likely the relationship between the first farmers who introduced wet rice farming and the indigenous hunter–gatherers who lived there. View Full-Text
Keywords: bronze age; hunter gatherers; interaction; irrigation system; Jomon people; Korean Peninsula; wet rice cultivation bronze age; hunter gatherers; interaction; irrigation system; Jomon people; Korean Peninsula; wet rice cultivation
►▼ Show Figures 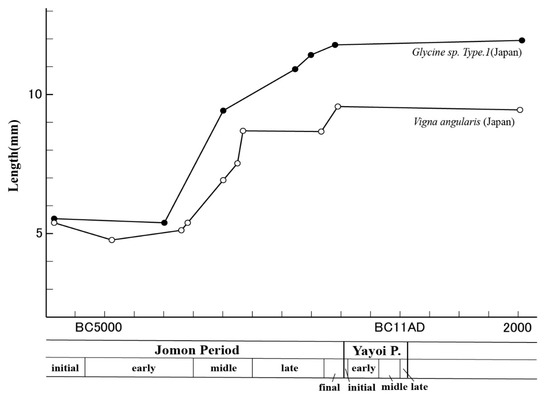