Ultrastructural Remodeling of the Neurovascular Unit in the Female Diabetic db/db Model–Part II: Microglia and Mitochondria

The unique properties of single-walled carbon nanotubes (SWCNTs) have made them interesting candidates for applications in biomedicine. There are diverse chemical groups that can be attached to SWCNTs in order for these tiny tubes to gain various functionalities, for example, water solubility. Due to the availability of these “functionalization” approaches, SWCNTs are seen as agents for a potential anti-cancer therapy. In this context, we tested different chemically-functionalized forms of SWCNTs to determine which modifications make them better combatants against glioblastoma (astrocytoma grade IV), the deadliest brain cancer. We investigated the effects that two types of water soluble SWCNTs, functionalized with polyethylene glycol (SWCNT-PEG) or tetrahydrofurfuryl-terminated polyethylene glycol (SWCNT-PEG-THFF), have on the morphology and vitality, that is, cell adhesion, proliferation and death rate, of the D54MG human glioblastoma cells in culture. We found that SWCNT-PEG-THFF solute, when added to culture media, makes D54MG cells less round (measured as a significant decrease, by ~23%, in the form factor). This morphological change was induced by the PEG-THFF functional group, but not the SWCNT backbone itself. We also found that SWCNT-PEG-THFF solute reduces the proliferation rate of D54MG cells while increasing the rate of cell death. The functional groups PEG and PEG-THFF, on the other hand, reduce the cell death rate of D54MG human glioma cells. These data indicate that the process of functionalization of SWCNTs for potential use as glioma therapeutics may affect their biological effects.
Keywords: glioblastoma multiforme; carbon nanotubes; morphology; cell adhesion; cell proliferation; cell death rate glioblastoma multiforme; carbon nanotubes; morphology; cell adhesion; cell proliferation; cell death rate

Gliomas comprise the large majority of malignant brain tumors and are one of the deadliest cancers, with a median survival of 14 months. The most aggressive glioma type is classified, based on its cell origin, as astrocytoma (high) grade IV, traditionally referred to as a glioblastoma multiforme (GBM), which is the subject of this work. High grade gliomas are characterized by extensive dispersal throughout the brain, indicative of their highly invasive nature [1]. Glioma cells have to adjust their morphology, that is, become less round, during their invasion through the narrow and tortuous extracellular space of the brain [2]. Aside from their invasive nature, their adhesion and proliferative capabilities are factors contributing to their malignancy [3,4]. Finding new treatments that would stop/attenuate the spread of GBMs would be a milestone; this requires a detailed analysis of GBM biology.
The unique properties of single-walled carbon nanotubes (SWCNTs) have made them interesting candidates for applications in biotechnology and biomedicine [5,6]. In the context of glioma nanotechnology and translational therapeutics, functionalized SWCNTs have been used as carriers in advanced drug delivery systems [7,8,9] or as agents for photothermal therapy [10,11,12,13] in variety of human GBM and murine models, capitalizing on the availability of diverse and well established chemistries for the functionalization of SWCNTs [5,6] (i.e., attachment of various chemicals to the SWCNTs in order for tubes to gain a functionality, e.g., water solubility) and their properties to produce heat when exposed to non-ionizing near-infrared radiation [14]. These investigations have driven the development of functionalized SWCNTs as a carrier/delivery agent to cancer tissue; a variety of functionalizations of SWCNTs with molecules rendering their water solubility, a prerequisite for bio applications, have been developed. However, there has been a void in understating the effect of the components of such conjugate nanomaterials on GBM cells. For instance, possible effects of the functionalization group(s) of the conjugate SWCNT nanomaterial are not well described in the literature. Similarly, basic cell biology measurements, such as cell morphology, adhesion, proliferation and death rate, caused by the conjugate SWCNTs vs. their solubilization functional groups, have not been well described. In the present work we set to investigate these issues.
Our present work logically sprouts from our previous studies of the effect that SWCNTs have on primary astrocytes, as reviewed elsewhere [15]. Briefly, to investigate the effects of SWCNTs on primary mouse astrocytes in culture, we used graft copolymers/conjugates of SWCNTs chemically functionalized with polyethylene glycol (PEG) or poly-m-aminobenzene sulfonic acid (PABS) making SWCNTs water soluble (wsSWCNTs) [16,17]. When added to the culturing medium, wsSWCNTs were able to make astrocytes larger and less round compared to the untreated astrocytes, but these nanomaterials did not affect astrocyte vitality, that is, cell adhesion, proliferation and death rate [17]. Generally, the data indicated the necessity of the SWCNT backbone for the changes induced by the water-soluble graft copolymers, while some subtle differences in the effects that SWCNTs had on astrocytes (for clarity details omitted here, but summarized and reviewed in [15] and Table 1 of [17]; also see discussion) were due to the various functional groups attached to the SWCNTs.
In the present study, we aim to investigate the effects that two types of wsSWCNTs, SWCNTs functionalized with polyethylene glycol (SWCNT-PEG) [16,17] and SWCNTs functionalized with tetrahydrofurfuryl-terminated polyethylene glycol (SWCNT-PEG-THFF) [18], have on the morphology and vitality of the D54MG human glioma cell line. We found that SWCNT-PEG-THFF solute induces morphological changes in D54MG human glioma cells. These changes were induced by the functional group, and not the SWCNT backbone itself. Other findings show that, SWCNT-PEG-THFF solute reduces the proliferation potential of D54MG human glioma along with increasing the relative cell death rate, while the functional groups PEG and PEG-THFF reduce the cell death rate of D54MG human glioma cells. Taken together, our present work indicates that additional care should be taken in the process of functionalization of SWCNTs for potential use as glioma therapeutics, as SWCNT conjugates may cause differential biological effects pending on the functional group rendering their water solubility.

Single-walled carbon nanotubes were rendered water soluble by covalent attachment of PEG (molecular mass 600 g/mol) or PEG-THFF (molecular mass 200 g/mol) to their walls. These graft copolymers were synthesized and characterized as described in detail elsewhere [16,18]. Single-walled carbon nanotubes- polyethylene glycol used in this study contained, 23 wt% PEG, while the SWCNT-PEG-THFF contained 21 wt% PEG-THFF. Both the SWCNT graft co-polymers were used as colloidal aqueous solutes in cell culture media (see below) at a concentration of 5 µg/mL, chosen based on our previous work [16,17,19]. The functional groups, PEG or PEG-THFF, were used at a concentration of 1 µg/mL, corresponding to 20 wt% of the functionalized wsSWCNTs.

The human glioma cell line D54MG (classified as a glioblastoma multiforme, GBM, also known as grade IV astrocytoma) modified to stably express enhanced green fluorescent protein (EGFP), as previously described [20,21], was provided by Dr. Harald Sontheimer (at that time at The University of Alabama at Birmingham). From here, we refer to these cells as D54MG-EGFP cells, which were used in all the experiments with the exception of the immunocytochemistry data in Supplementary information, where we used unmodified D54MG cells, also provided by Dr. Harald Sontheimer [20], which originate from Dr. Darrell D. Bigner (Duke University, Durham, NC, USA). We maintained these cells in tissue culture dishes at 37 °C in a 90% air/10% CO2 atmosphere incubator in cell culture media containing Dulbecco’s Modified Eagle Medium/Nutrient Mixture F-12 (DMEM/F-12, Life Technologies, Carlsbad, CA, USA) supplemented with 2 mM L-glutamine and 7% Fetal Bovine Serum (HycloneTM, ThermoFisher Scientific, Waltham, MA, USA) and used them in the experiments within 20 passages. For the experiments, glioma cells propagating in the dishes were washed with Hank’s balanced salt solution (ThermoFisher Scientific, Waltham, MA, USA) and treated with 0.25% trypsin-EDTA (ThermoFisher Scientific, Waltham, MA, USA) for 2 mins to detach the cells. The resulting cell suspension was pelleted by centrifugation for 7 mins at 100× g. The pellet was resuspended in fresh culture media and plated onto round glass coverslips (12 mm in diameter) pre-cleaned with RBSTM 35 (ThermoFisher Scientific, Waltham, MA, USA) [22]. To allow cells to settle, coverslips were returned to the incubator for 1 h, after which the cell suspension was replaced with fresh cell culture media. At this point, a subset of the cells on coverslips received treatments of SWCNT-PEG or SWCNT-PEG-THFF, or the functional groups, PEG or PEG-THFF, added to the culture media and returned to the incubator until used in the experiments.

To assess the cellular morphology, solitary D54MG-EGFP cells were imaged, 1-day post-plating, using the above described microscope and a 60× Plan Apochromatic oil-immersion objective. The images were analyzed using a previously described algorithm [16] to measure the area and perimeter of the individual cells, except that here we used the EGFP fluorescence instead of the previously used calcein fluorescence to obtain the outline of the cell. The area and perimeter values were further used to calculate the form factor (FF; defined as [4π × (Area)/(Perimeter)2]) which is a measure of the roundness of an object/cell; a perfectly round/circular object has a FF = 1, while FF ≈ 0 describes a line.

To assess the vitality characteristics of SWCNT-treated D54MG-EGFP cells, that is, cell adhesion, proliferation and death rate, coverslips with cells were imaged 2 h and 2 days post-plating. The 2-h time point was used to establish initial plating density, that is, cell adhesion, while the 2-day time point was used to assess the proliferation of cells, under each condition. Prior to imaging, all the cells were incubated for 10 min in external solution containing 1 µg/mL of the cell permeable nuclear dye Hoechst 33342 (2’-[4-ethoxyphenyl]-5-[4-methyl-1-piperazinyl]-2,5’-bi-1H-benzimidazole trihydrochloride trihydrate; ThermoFisher Scientific, Waltham, MA, USA) to label the nuclei. After rinsing, the cells were then imaged using the above described microscope and a 20× Plan Fluor objective. The fluorescence of Hoechst 33342 was visualized using a standard 4’,6-diamidino-2-phenylindole (DAPI) filter set, while a FITC filter set was used to image the cytosol of cells, containing EGFP, with their plasma membranes intact. The FITC and DAPI images where then merged, using ImageJ software (National Institutes of Health, Bethesda, MD, USA), to visualize the cells and their corresponding nuclei. The cells positive for EGFP and Hoechst were considered live, while positively stained nuclei with Hoechst lacking surrounding EGFP stain were considered to represent dead cells. The number of nuclei per total viewed area (0.75 mm2) was counted, as we described in detail elsewhere [23]; cell density was expressed as number of cells per cm2.

Statistical analysis was done using GB-STAT version 6.5 software (Dynamic Microsystems, Inc., Silver Spring, MD, USA) and SAS Software, version 9.2 of the SAS software for Windows (SAS Institute Inc., Cary, NC, USA). The number of subjects (cells or coverslips) required for comparison was estimated using power analysis (set 80% and α = 0.05) and guided by our previously published work [16,17,19,23]. Some groups deviated from normality based on Shapiro-Wilk or D’Agostino-Pearson tests for normality. Consequently, all the data are reported as median with interquartile range (IQR) and nonparametric statistics were used. To test the difference between the 2-h and 2-day time points in the vitality assay, the two groups were compared using Mann-Whitney U-test. For all the other experiments, the multiple independent groups were analyzed using Kruskal-Wallis One-Way ANOVA followed by Dunn’s test (significance established at p < 0.05).

3.1. Effect of wsSWCNTs on the Morphology of D54MG-EGFP Glioma Cells

This work was supported by the National Institutes of Health (The Eunice Kennedy Shriver National Institute of Child Health and Human Development award HD078678 to V.P.) and by the Civitan International McNulty Award (V.P.).

We thank Prof.Harald Sontheimer for providing us with an initial stock of the D54MG and D54MG-EGFP glioma cell lines. 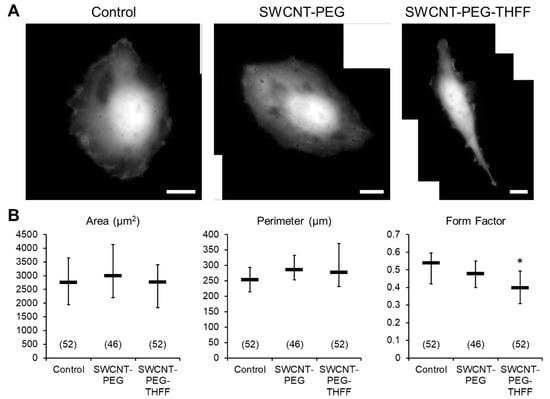 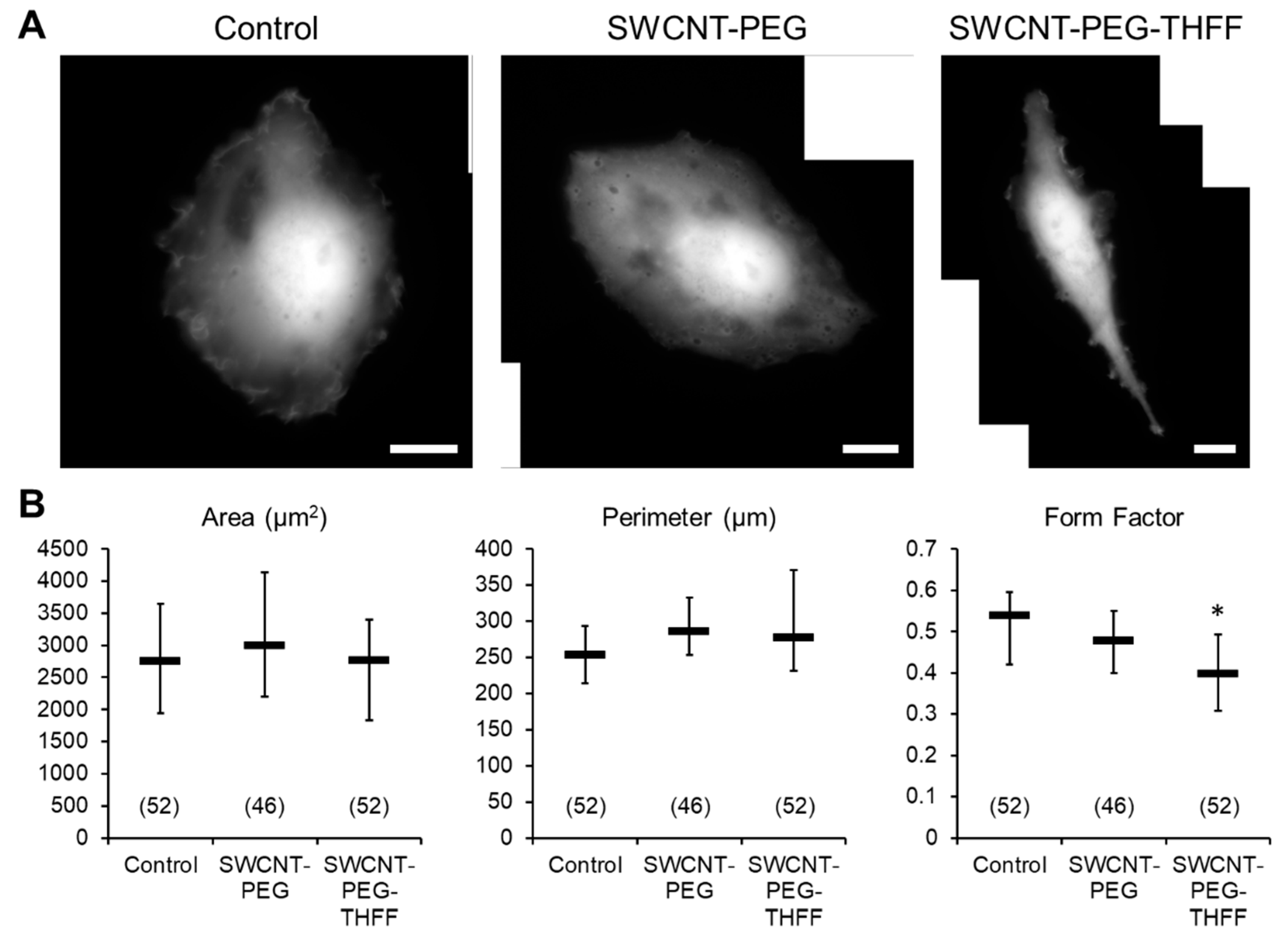 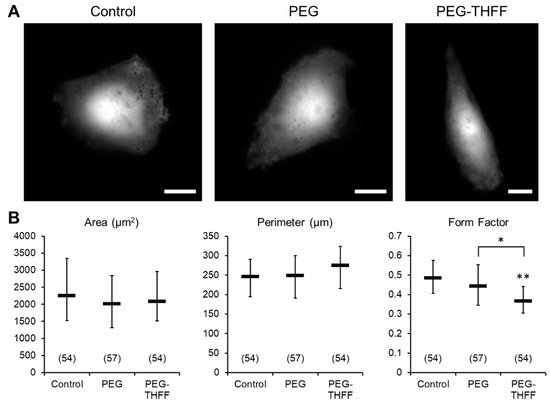 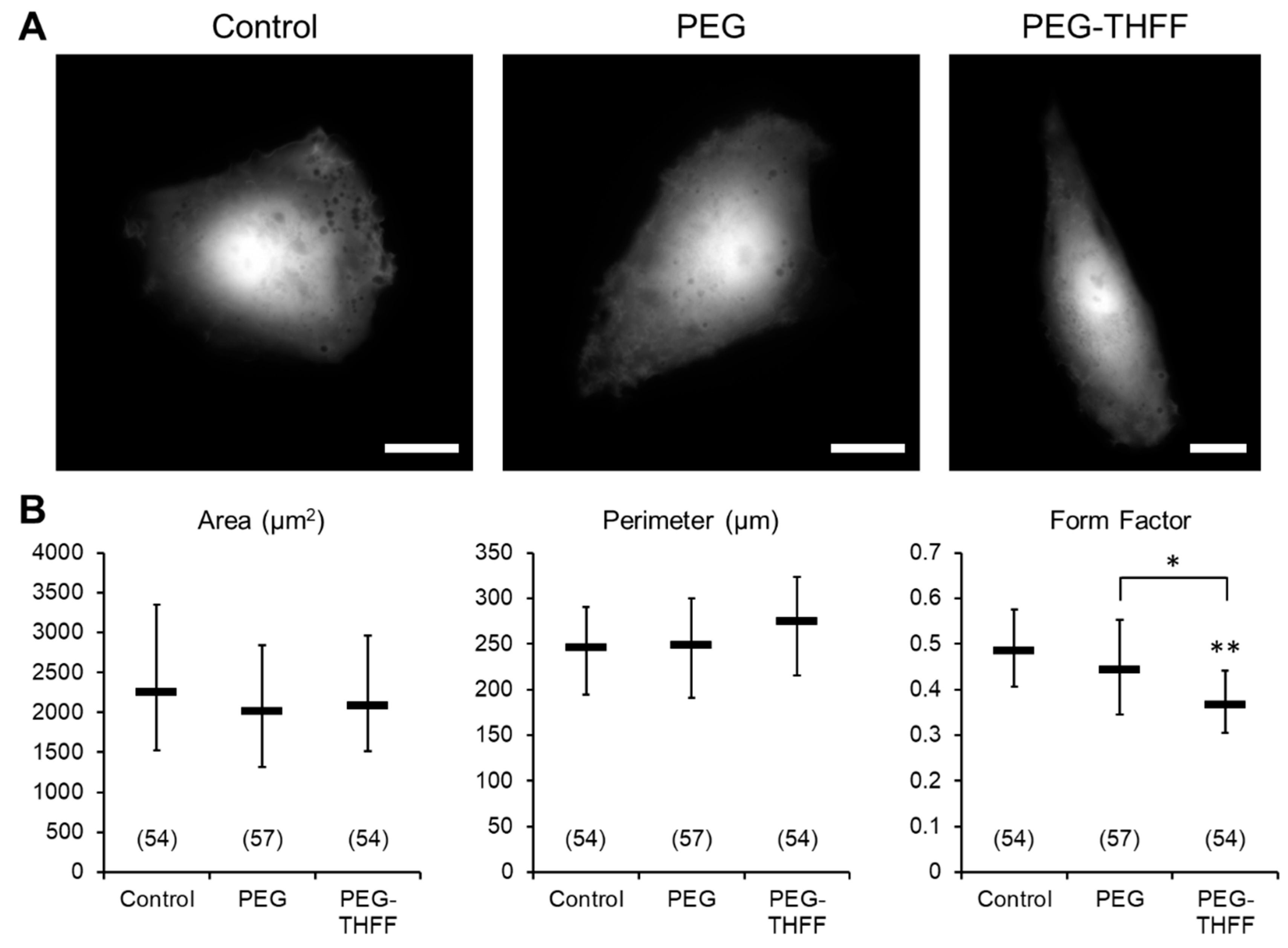 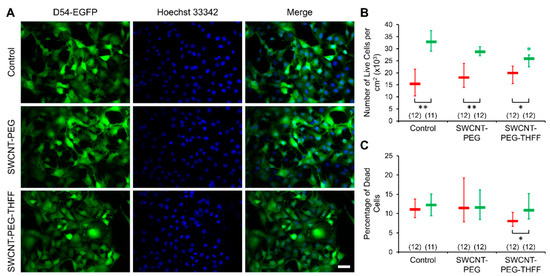 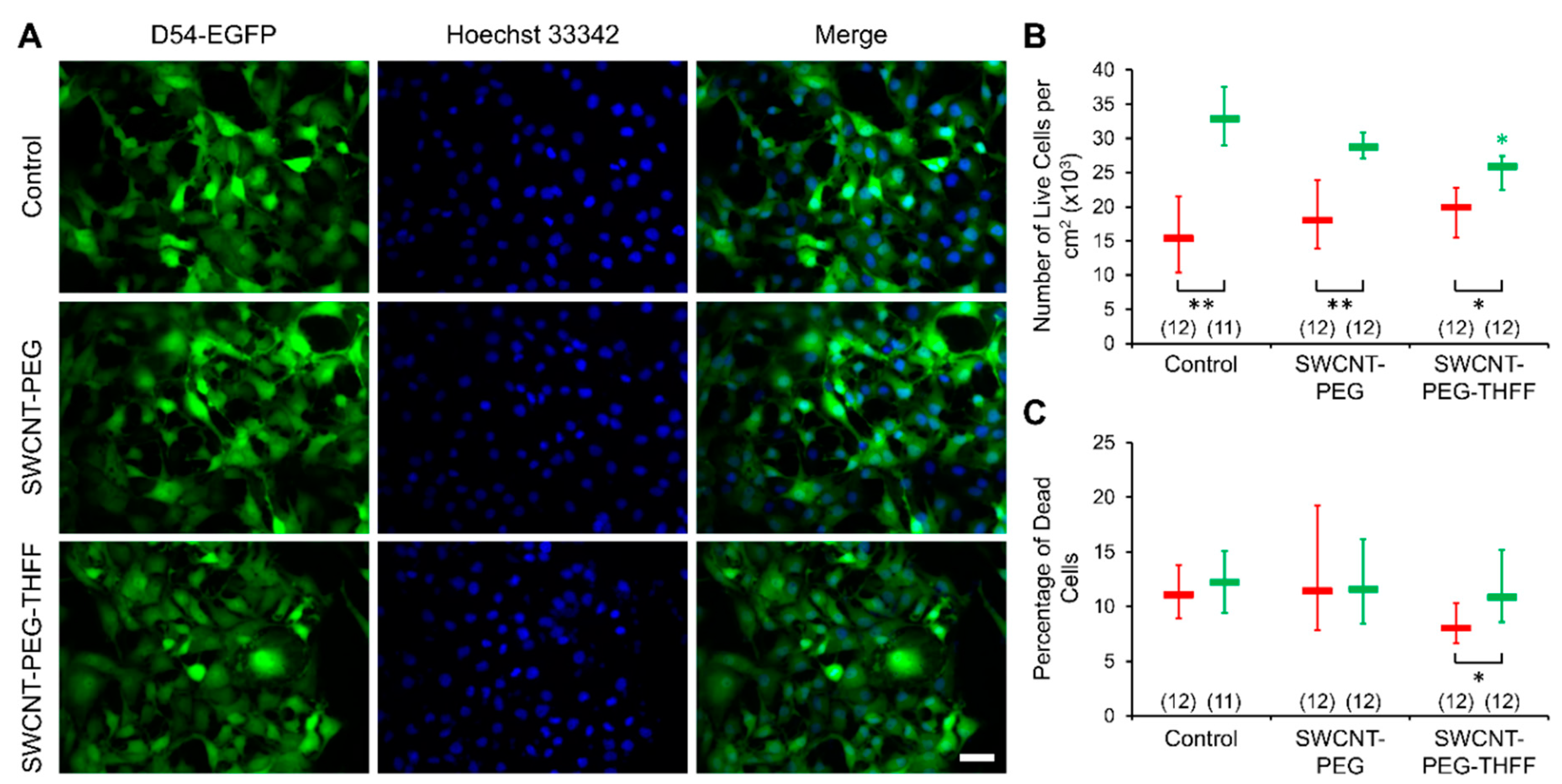 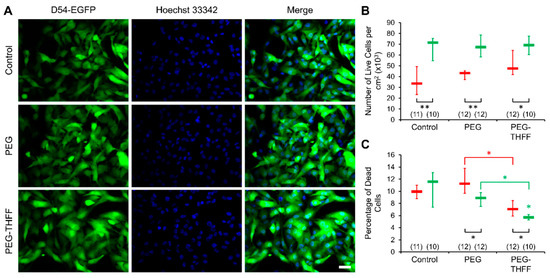 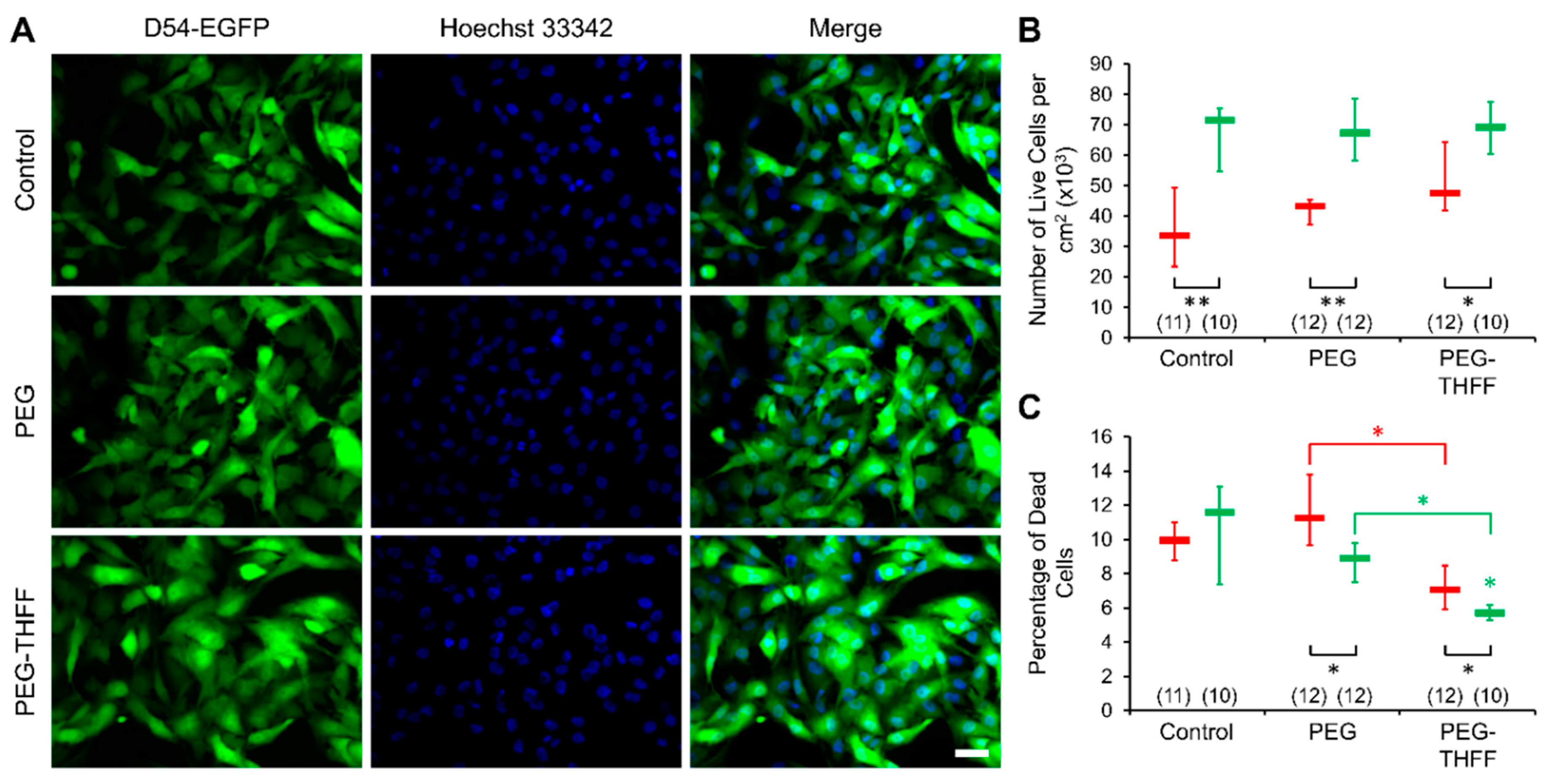