Hypothesis: Neuroglia Activation Due to Increased Peripheral and CNS Proinflammatory Cytokines/Chemokines with Neuroinflammation May Result in Long COVID
Previous Article in Journal

James St John grew up in Melbourne, Australia and started his scientific career in agricultural science. He completed a Bachelor’s degree and PhD in agriculture science (1996) at the University of Melbourne and he also completed a Bachelor of Letters in International Development at Deakin University. His PhD was on the synthesis of carbohydrates in temperate grass species, and Agricultural Science taught him the importance of understanding the market and the need to develop economically relevant products. Despite his ambition of working in international agriculture, he was drawn to biomedical research by good luck. A chance conversation with a colleague about how carbohydrates could be involved in the guidance of neurons led to James having a compelling scientific drive to explore this exciting area. Neuroscience is quite a different field to agricultural pasture research, but risk taking, innovation and adaptability is what science is all about.
James started his biomedical postdoctoral research with Professor Brian Key at the University of Melbourne, where he worked on how carbohydrates contribute to the guidance of olfactory sensory neurons during development of the olfactory system [1]. James and Brian created a successful team which led to James being awarded an Australian National Health and Medical Research Council (NHMRC) Peter Doherty Postdoctoral Fellowship. James moved to the University of Queensland with Brian in 1999 and continued the olfactory axon research program with successive project grant funding from the NHMRC for the next 8 years.
After years of axon guidance research, James switched focus to glial cells as he realised that effective neural regeneration can only be achieved when glial cells are put front and centre of therapies. In 2007, he moved to Griffith University, Queensland, Australia, to work with Professor Alan Mackay-Sim, who is a pioneer in the therapeutic use of the glia of the olfactory system, olfactory ensheathing cells, for spinal cord repair. Alan was later awarded the 2017 Australian of the Year for his pioneering work for spinal cord repair. In 2016, James became Head of the Clem Jones Centre for Neurobiology and Stem Cell Research at Griffith University. The Centre aims to create therapies to treat injuries and diseases of the nervous system, particularly spinal cord injury, peripheral nerve injury and Alzheimer’s disease. Griffith University values the pursuit of research that will make a positive impact for the community and the university strongly promotes the integration of philanthropy, industry, clinicians and community to drive therapies to the clinic. With this drive to create therapies, James adopted the innovation pipeline for the Centre’s research program.
James has published extensively on the biology of olfactory ensheathing cells and other glia and has identified and examined properties of these cells that are therapeutically useful [2]. Cell transplantation therapies are faced with the difficulties of (i) cell survival, (ii) integration and migration into the host tissue and (iii) continuing to exert functional efficacy for neural repair. To address these issues, the Centre’s research has used the vast resources of the Griffith Institute for Drug Discovery to apply drug discovery approaches to identify compounds that can stimulate the proliferation, migration and phagocytic activity of olfactory ensheathing cells [3,4]. To improve cell transplantation techniques, the research team also developed a three-dimensional liquid marble system that allows the cells to form stable cell–cell connections prior to transplantation [5]. Due to the innovative team, the three-dimensional cell system has been made suitable for treating spinal cord injury and peripheral nerve injury and this work was awarded the NHMRC 2019 Marshall and Warren Innovation Award. 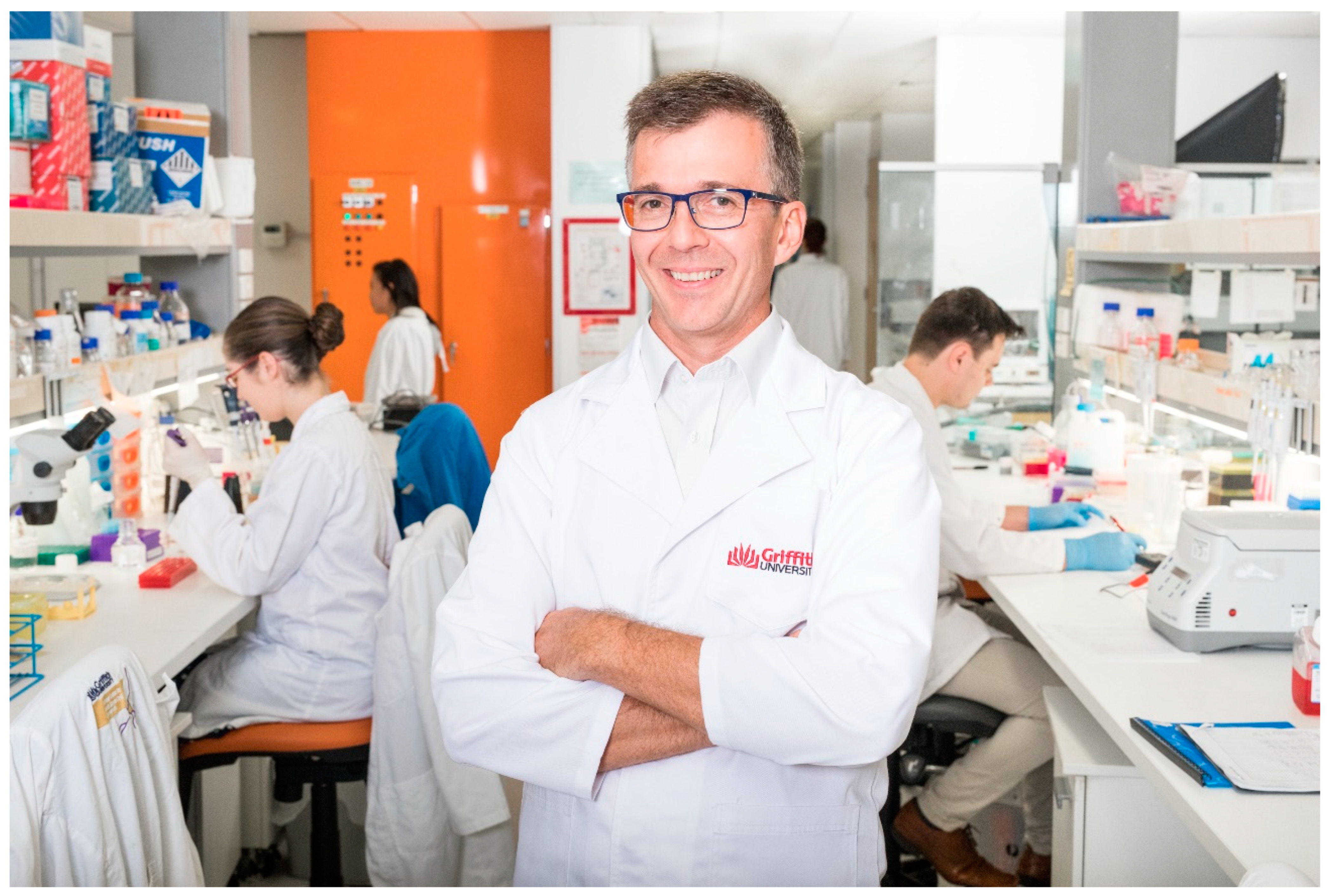 Apart from the therapeutic potential of olfactory cells, the olfactory system is also a portal for pathogen entry into the brain. While olfactory ensheathing cells can protect against many pathogens, some pathogens are able to escape destruction or even live inside the glia, and can then move along the olfactory nerve to enter the brain [6]. The long-term consequence of this is being explored, but there is clearly strong evidence that these pathogens may contribute to the onset and progression of neurodegeneration, including Alzheimer’s disease. Perhaps therapies can be developed by activating glial cells to more effectively remove and destroy pathogens.
Success is always due to teamwork. While James has a keen interest in translational research, his wife, Associate Professor Jenny Ekberg, who is also a project leader in the Centre, brings expertise in physiology and cell biology. Together, these complementary approaches expand the capacity of the research programs. Diversity is certainly a key driver for success and the Centre has recruited researchers from around the world. The current research team has over 30 researchers from 12 different countries and includes medical doctors, a veterinary surgeon, bioengineers, cell biologists, molecular biologists and microscopy experts. In addition, the team consults widely with the community to ensure that the research is focussed on outcomes that matter, and so that communication of complex science can be understood by the public.
James firmly believes that together as a community we can create therapies to improve the lives of the many people who are affected by injuries and diseases of the nervous system. Neuroglia aims to be the platform where we can make this happen.

© 2021 by the author. Licensee MDPI, Basel, Switzerland. This article is an open access article distributed under the terms and conditions of the Creative Commons Attribution (CC BY) license (https://creativecommons.org/licenses/by/4.0/).
We use cookies on our website to ensure you get the best experience. Read more about our cookies here.
Accept
We have just recently launched a new version of our website. Help us to further improve by taking part in this short 5 minute survey here. here.
Never show this again