Commodities play an important role in the global economy, whose 5% share is made up by just the oil and natural gas industry, not to mention the significant contribution of other energy, metal, mineral and agriculture commodities. It is, therefore, evident that commodity prices are the key drivers of inflation, economic activity or current account balances. At an individual level, they influence the costs of living of households around the globe, both directly (e.g., through petrol prices at gas stations) and indirectly through their impact on other consumer goods prices (through their production costs). At a firm level, commodity prices significantly influence profits. For instance, in the airline industry, with profits depending heavily on jet fuel prices, oil price forecasts are used to set tariffs and assess aircraft purchasing decisions. In turn, car manufacturers use oil price forecasts to design new products with a focus on fuel economy, whereas the financial industry uses commodities to hedge against inflation [1,2]. For the above reasons, understanding commodity price dynamics and the ability to formulate reliable forecasts are important to many economic agents. For companies, they would help in assessing strategic policies or investment decisions with a long-term impact. For countries where commodities are important sources of export revenues, price forecasts would help predict their budget balances. Ultimately, for central banks, they would improve the assessment of the future path of inflation, GDP or external imbalances, hence allowing for a better monetary policy conduct.
A question of whether it is possible to forecast commodity prices reliably is the subject of a long-standing debate in the economic literature. It turns out that commodity prices are more volatile than stock prices or exchange rates, hence accurate forecasts are considered to be a real challenge. So far, various methods have been compared to the simple random walk (no-change) forecast in out-of-sample forecasting competitions. The results of numerous studies show that, for selected time spans and commodities, some methods deliver significantly better forecasts than the random walk model. However, these studies are usually mute on whether the random walk is indeed a tough benchmark to beat in a forecasting competition.
Instead of searching for the best forecasting method, we ask whether the random walk is a proper benchmark in commodity price forecasting. We address this issue by comparing two reasonable alternatives. For nominal commodity prices and short-term horizons, we compare naive forecasts to those based on futures prices. For real commodity prices and longer horizons, we use local projection models that assume reversion towards the recursive sample mean. Our analysis is conducted for four groups of commodities: energy, precious and industrial metals, and agriculture products. We also review the literature supporting futures prices and mean-reversing models as additional benchmarks to the random walk model.
The key message of our analysis is twofold. In nominal commodity price forecasting, investigated methods should be compared to both the random walk and futures-based forecasts, whereas in real commodity price forecasting, the random walk and local projection models should be used as benchmarks.
The rest of the paper is structured as follows. Section 2 and Section 3 discuss nominal and real commodity price forecasting competitions. Section 4 concludes.

2. Futures Prices as a Benchmark for Nominal Prices

3. Local Projection as a Benchmark for Real Commodity Forecasts

The random walk no-change forecast is the most popular benchmark against which other methods used for forecasting commodity prices are evaluated. In this paper, we investigate whether the random walk is indeed a proper benchmark or whether some alternative models could be used instead. Based on a thorough literature review, we identify two candidates. First, for nominal commodity prices, some studies imply that forecasts based on futures prices could give a competitive advantage over the random walk. Second, based on the literature evidence on mean-reversion of real commodity prices, we conjecture that this feature could be exploited out-of-sample within the local projection framework.
To verify the quality of these alternative benchmarks, we have conducted an out-of-sample forecasting contest using data for a broad spectrum of commodities (WTI and Brent crude oils, natural gas, copper, gold, silver, wheat and maize), which are most often analyzed in the forecasting literature, and over a long time span covering the period 2000–2021. Our results demonstrate that the two alternative benchmarks deliver forecasts of comparable and in many instances superior quality. Our conclusions are twofold. First, futures-based forecasts should supplement the random walk as a benchmark in forecasting nominal commodity prices. Second, we recommend using a local projection forecast as an additional or even as an alternative benchmark in forecasting real commodity prices.

We are grateful for the valuable suggestions of two anonymous referees that helped to improve the article. 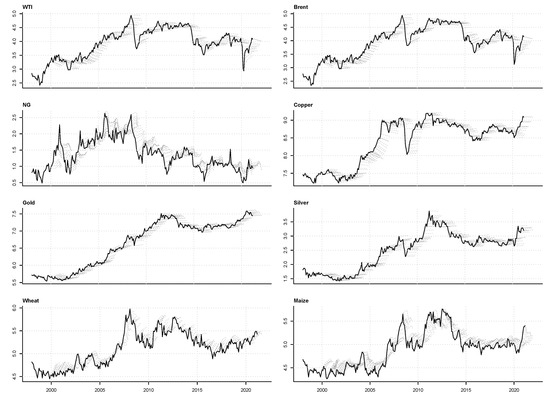 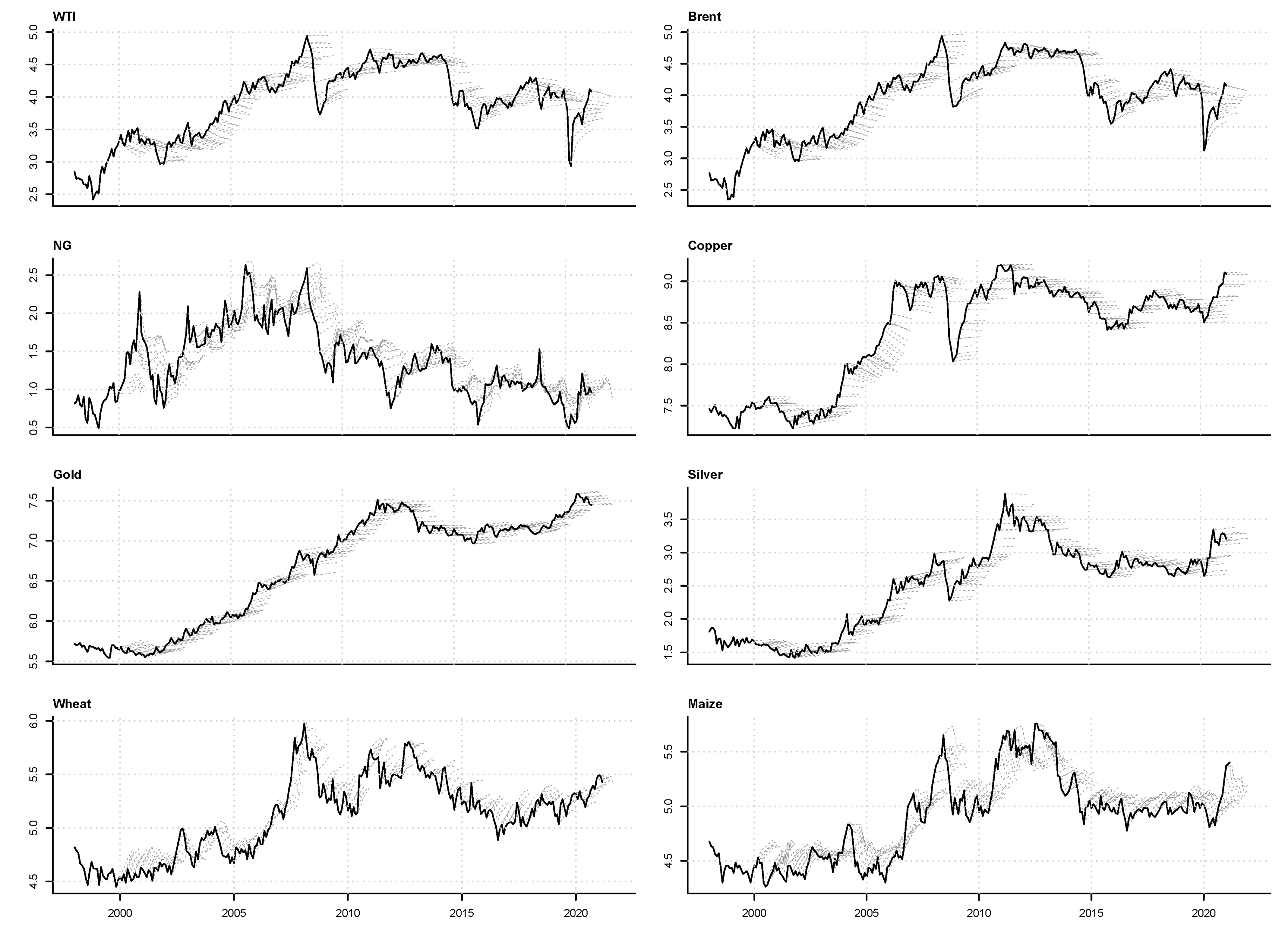 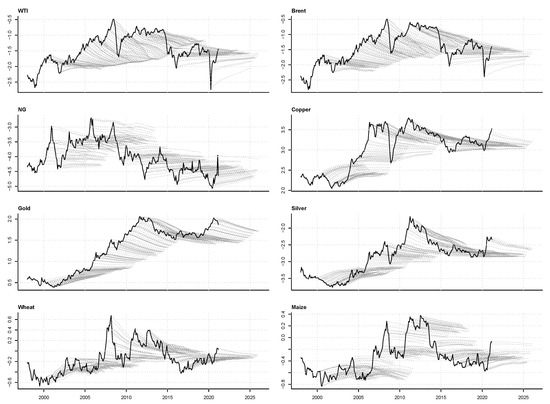 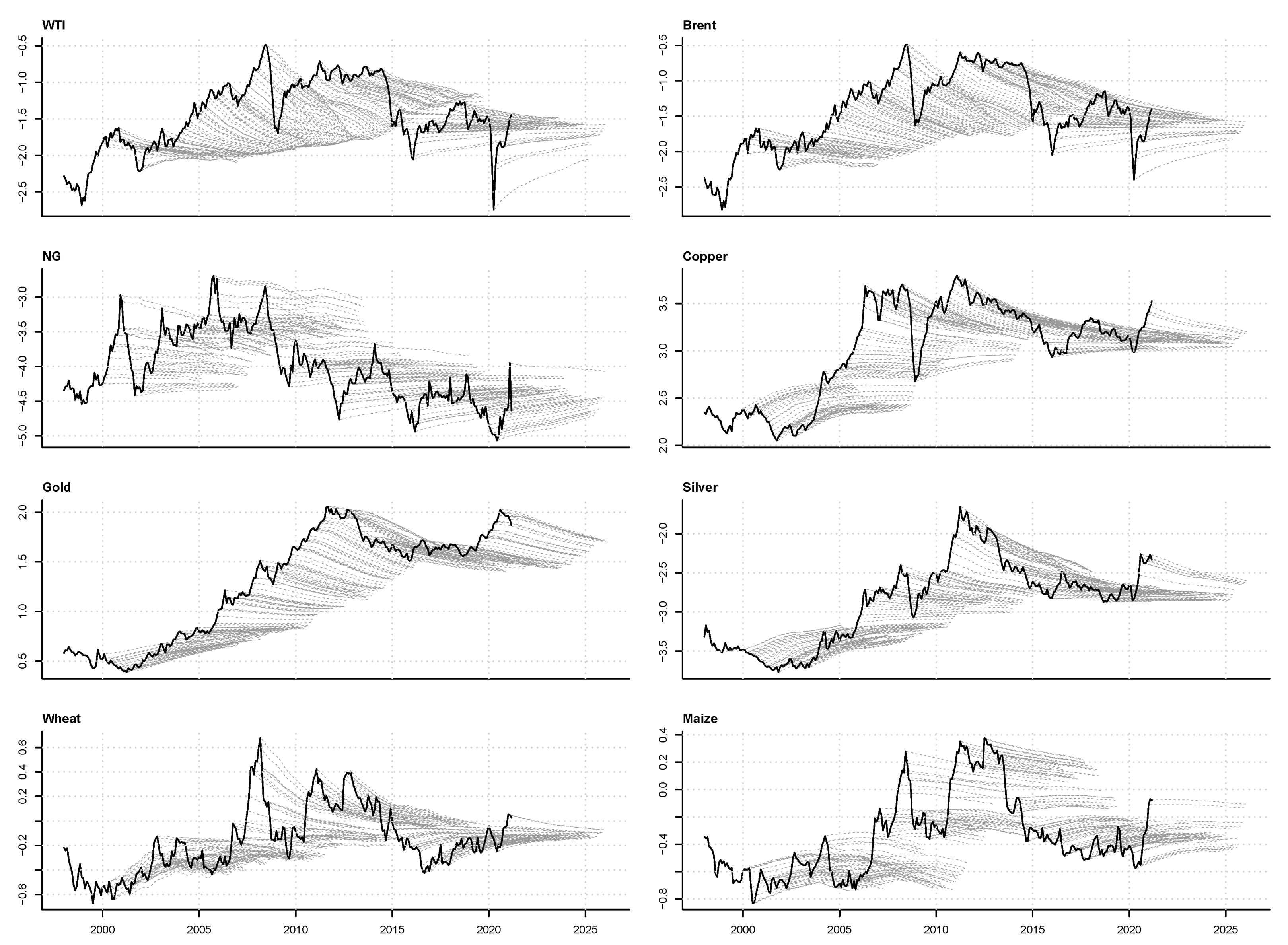 Table 1. RMSFE ratio for nominal commodity price forecasts.
Table 1. RMSFE ratio for nominal commodity price forecasts.
Notes: The table presents the RMSFE ratio of futures-based forecasts relative to the random walk. The values below unity indicate the superiority of futures-based forecasts. Asterisks ***, ** and * denote the 1%, 5% and 10% significance levels of the one-sided Coroneo and Iacone [26] version of the Diebold and Mariano test with the alternative that a given model performs better than RW. Forecasts with 1 to 12 month horizons are evaluated for January 2000 to March 2021. We obtained reliable futures prices for wheat and maize for horizons up to 6 and 9 months respectively, thus missing forecasts for longer horizons indicated by N/A’s.

Table 3. RMSFE ratio for real commodity price LP-based forecasts.
Table 3. RMSFE ratio for real commodity price LP-based forecasts.
Notes: The table presents the RMSFE ratio of local projection (LP)-based forecasts relative to the random walk. The values below unity indicate the superiority of LP forecasts. Asterisks ***, ** and * denote the 1%, 5% and 10% significance levels of the one-sided Coroneo and Iacone [26] version of the the Diebold and Mariano test with the alternative that a given model performs better than RW. Forecasts with 1 to 60 month horizons are evaluated using data from January 2000 to March 2021. Models are estimated recursively on data from January 1980 (thus with at least 20 year estimation windows), with an exception of WTI with estimation windows starting from January 1982.

Table 5. RMSFE ratio for real commodity price AR(1)-based forecasts.
Table 5. RMSFE ratio for real commodity price AR(1)-based forecasts.
Notes: The table presents the RMSFE ratio of AR-based forecasts relative to the random walk. Asterisks ***, ** and * denote the 1%, 5% and 10% significance levels of the one-sided Coroneo and Iacone [26] version of the the Diebold and Mariano test. The forecasting exercise settings and reporting conventions as in Table 3.
© 2021 by the authors. Licensee MDPI, Basel, Switzerland. This article is an open access article distributed under the terms and conditions of the Creative Commons Attribution (CC BY) license (https://creativecommons.org/licenses/by/4.0/).
We use cookies on our website to ensure you get the best experience. Read more about our cookies here.
Accept
We have just recently launched a new version of our website. Help us to further improve by taking part in this short 5 minute survey here. here.
Never show this again