Micro Destructive Analysis for the Characterization of Ancient Mortars: A Case Study from the Little Roman Bath of Nora (Sardinia, Italy)
Next Article in Special Issue

Contemporary Murals in the Street and Urban Art Field: Critical Reflections between Preventive Conservation and Restoration of Public Art

The results of the analysis on some fragments of bronze belts and a bowl discovered from southwestern Armenia at the Yegheghnadzor archaeological site are discussed. The samples are dated to the 7–6th millennium BCE from the Urartian period. The artefacts were corroded, and a multilayer structure was formed. To study the stratigraphy of layers and their composition, the samples have been analyzed using SEM-EDS (Scanning Electron Microscopy, Energy-Dispersive Spectrometry) and OM (Optical Microscopy) techniques. The bronze finds appear with the typical incrustations rich in alloy alteration compounds. Concentrations of copper and tin in the alloys were quantified by SEM-EDS: the pattern and the percentage of the alloy are the same for the belts. Regarding the bowl sample, it is constituted by two foils perfectly in contact but different in color, thickness, and composition. The results evidenced that only two elements participate in forming the alloy composition in the samples: Cu and Sn. The tin content is variable from 7.75% to 13.56%. Other elements such as Ag, As, Fe, Ni, P, Pb, Sb, and Zn make up less than 1% and can be considered as impurities.
Keywords: bronze belts; bowl; SEM-EDS; OM; Urartu bronze belts; bowl; SEM-EDS; OM; Urartu

For this work, both archaeological and experimental traces were observed and defined. The analytical approach took place first by observing the fragments with a stereomicroscope photographing them on a grid of graph paper, both on one side and the other. By convention, considering the fragments as caps, the front face was considered the external surface, the convex one, while the concave face was considered the rear surface. The thickness of each fragment was observed as well, positioning the profile of each one in a sand bed to show the whole stratification. The surfaces and the profiles of the fragments were observed at various magnifications (0.8×–16×) and photographed with the Leica digital camera. From each fragment, a micro-sample including the entire thickness (bulk metal, patinas, and concretions) was taken; it was embedded in polyester resin (Mecaprex) and subsequently ground and polished transversely to obtain a cross-section. The samples were observed with a Zeiss Axioplan 2 optical microscope equipped with halogen (Osram 100W) and ultraviolet (Zeiss Colibri UV LED, 360 nm) light sources and objectives Epifluar with 10× to 50× magnification; the images were recorded with a Canon EOS 1000 camera with 16 Mpx sensor and the Canon image Browser acquisition software. Subsequently, the same cross-sections were mounted on Al stubs (Ø = 13 mm) with a conductive adhesive based on metallic Ag (Agar silver paint) and metalized by a graphite sputter (Agar scientific sputter-coater, ca 40 mA), observing and analyzing them in high-vacuum SEM. EDX analyses were performed using a microprobe. The elements analysis was carried out employing an EDS microprobe Oxford “X-Max 80 Silicon Drift Detector” (SDD), and the analytic results, both in the form of XRF spectra of spots or areas and the distribution maps of the main elements, were processed using the Oxford “AZTEC 2.0” software.

To characterize some archaeological bronze artifacts in Armenia, a micro-stratigraphic approach based on SEM-EDS and OM methods has been established. The bronze finds appear with the typical incrustations rich in alloy alteration compounds.
Copper-based artifacts include alloys with complex microstructures made up of distinct phases, which may vary according to the chemistry of the materials as well as the techniques used to fabricate the objects [27,28,29,30,31]. The preparation of ground and finely polished cross-section samples with uniform surface geometry facilitated dramatically SEM-EDS determination of the major element composition and the distribution of all present elements. Concentrations of copper and tin in the alloys were quantified by SEM-EDS: the type and the percentage of the alloy are same for samples 1 and 2, such as the aspect, the alloy grains, and the thickness, except for the covellite layers on the inner face of the sample 2. Concerning sample 3, it is constituted by two foils perfectly in contact but different in color, thickness, and composition; a particular redeposition of native copper is present between the lamina due to the electrochemical effect between the foil of different compositions (bimetallic galvanic corrosion). The micro-stratigraphic study helps us better understand the corrosion mechanism and morphology in bronze artifacts as well as their conservation conditions in the archaeological bronze collection of Yeghegnazor. The results determine that only two elements play the main role to form alloy composition in the samples: Cu and Sn. The tin content is variable from 7.75 to 13.56%. Other elements such as Ag, As, Fe, Ni, P, Pb, Sb, and Zn globally are lower than 1% in many samples and do not play an important role in the alloying process. They can be considered as impurities that may originate from mother stone ores.

This research did not receive any specific grant from funding agencies in the public, commercial, or not-for-profit sectors.

The study was conducted according to the guidelines of the Declaration of Helsinki, and approved by the Institutional Review Board.

The authors are thankful to Karen Azatyan, director of the Yeghegnadzor regional Museum for supplying samples. 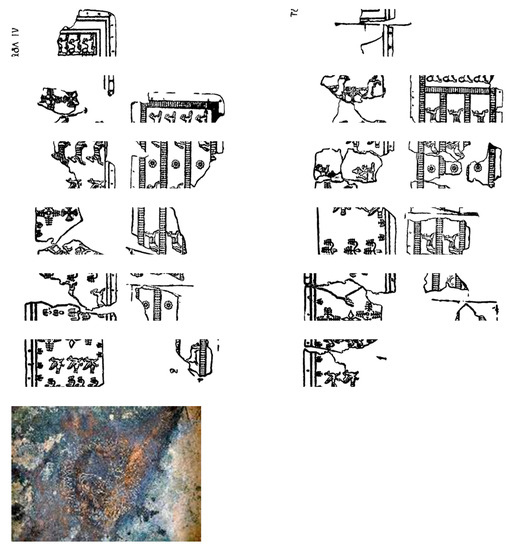 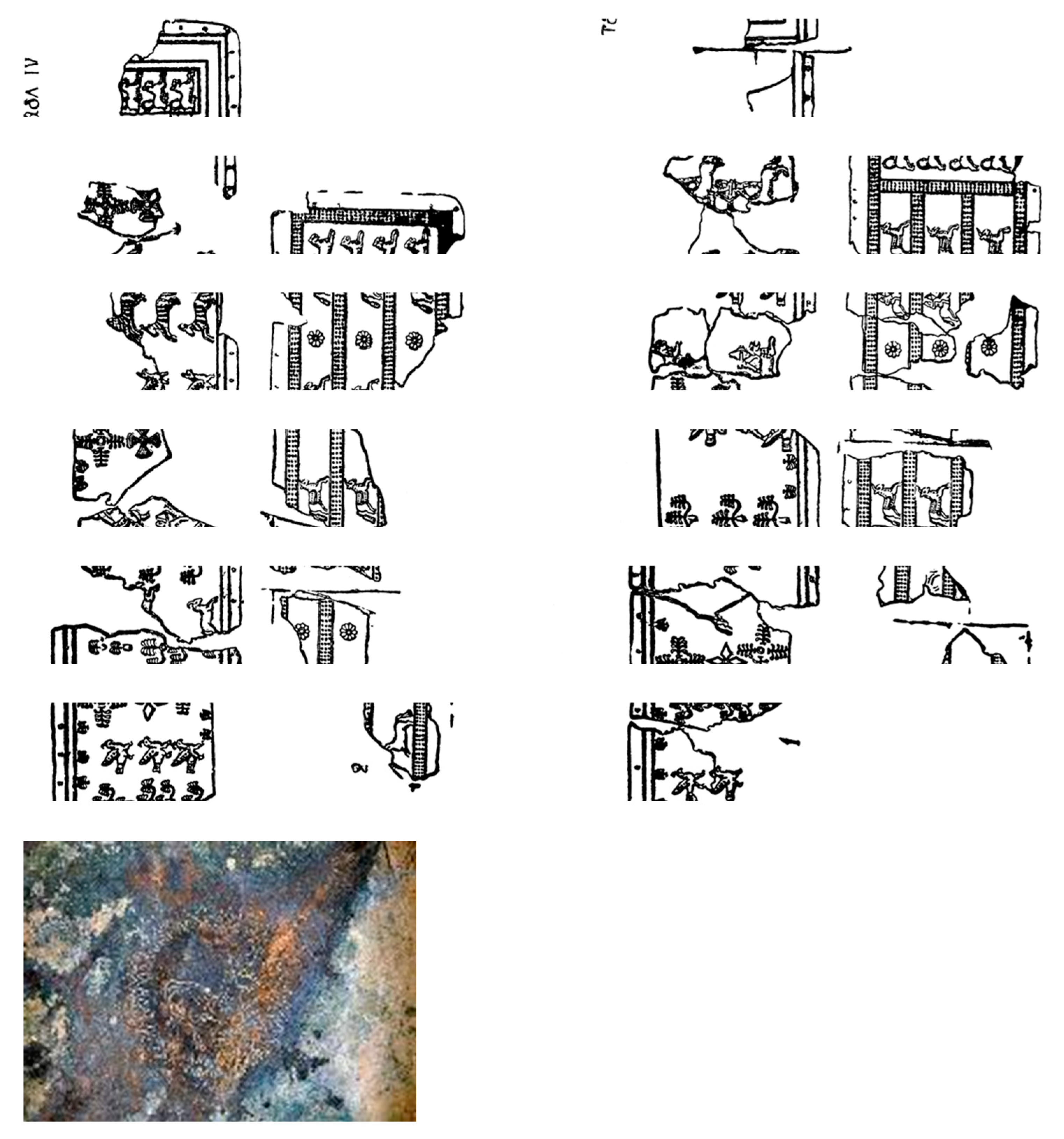 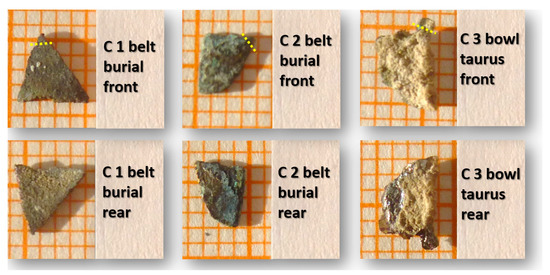 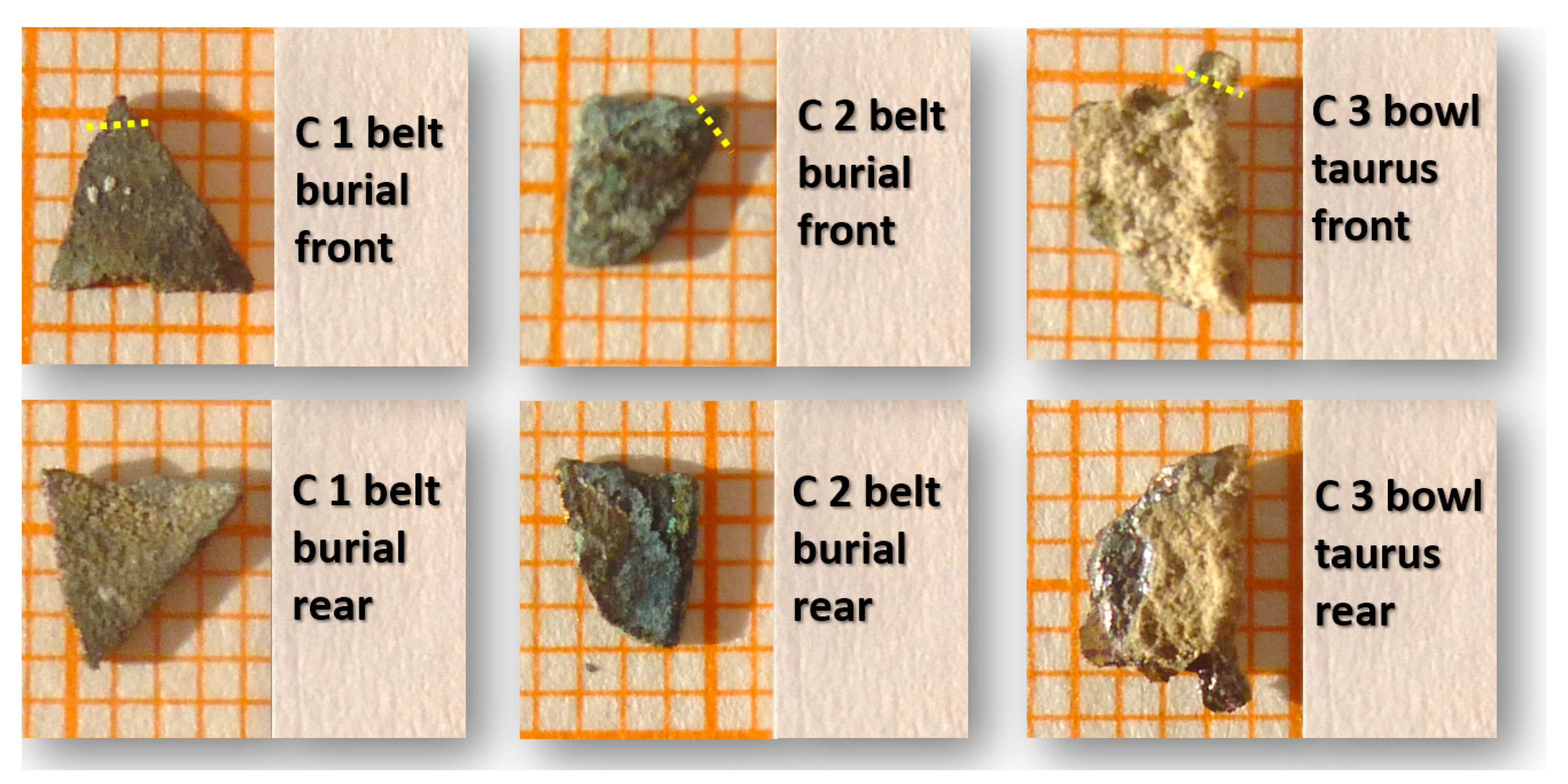 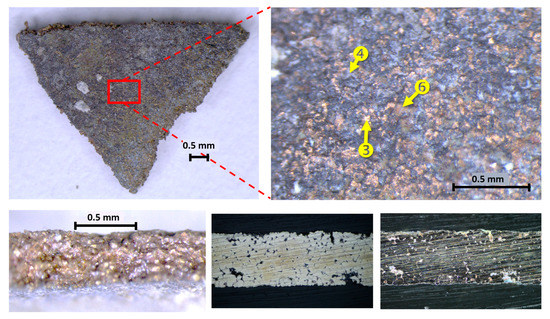 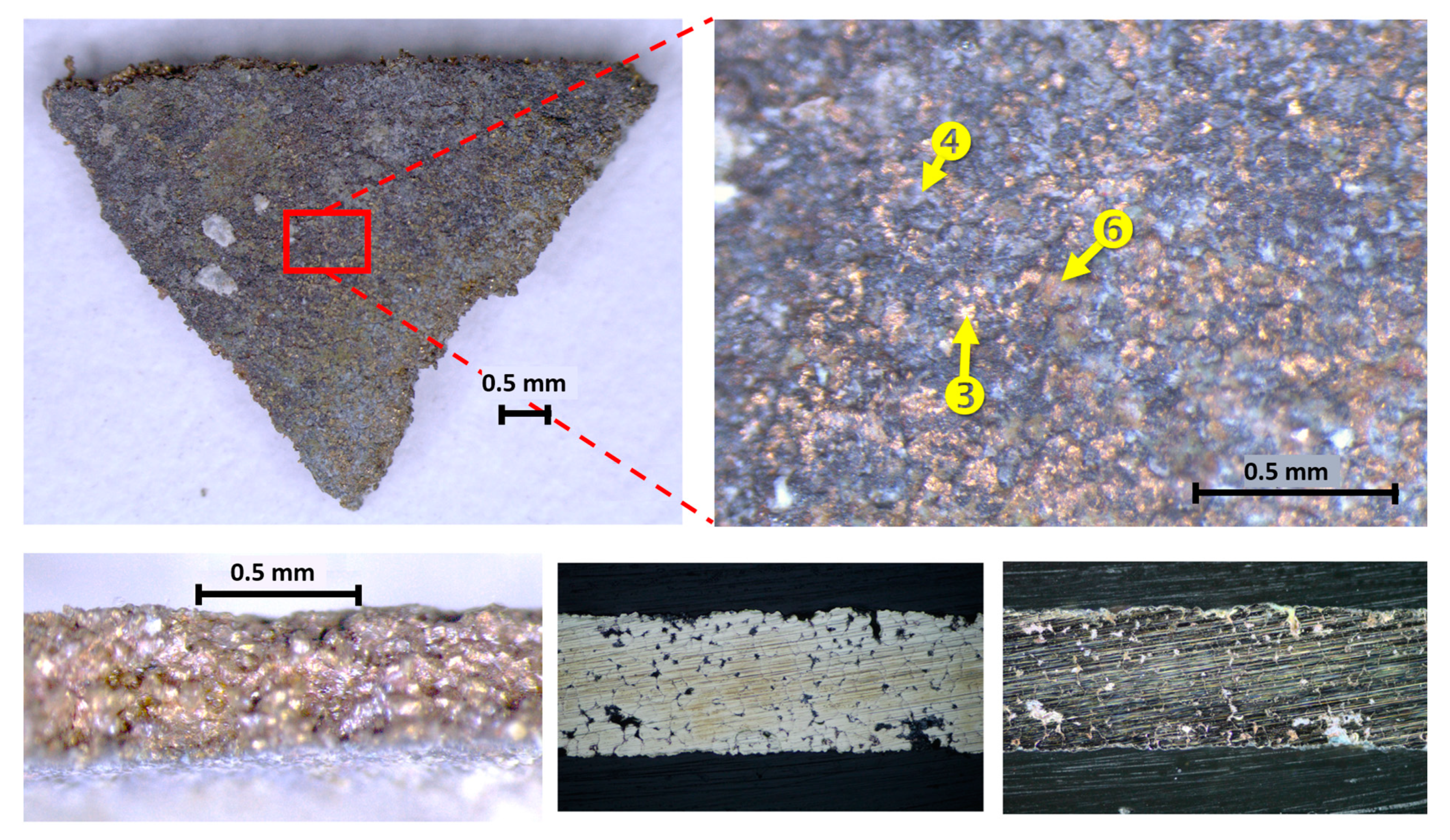 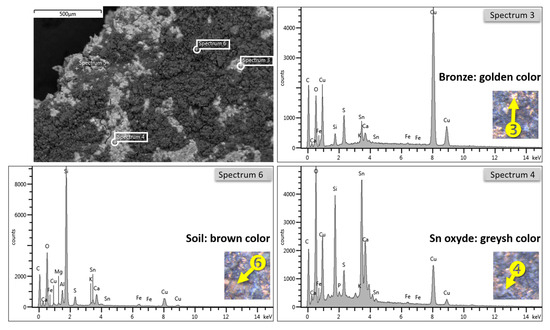 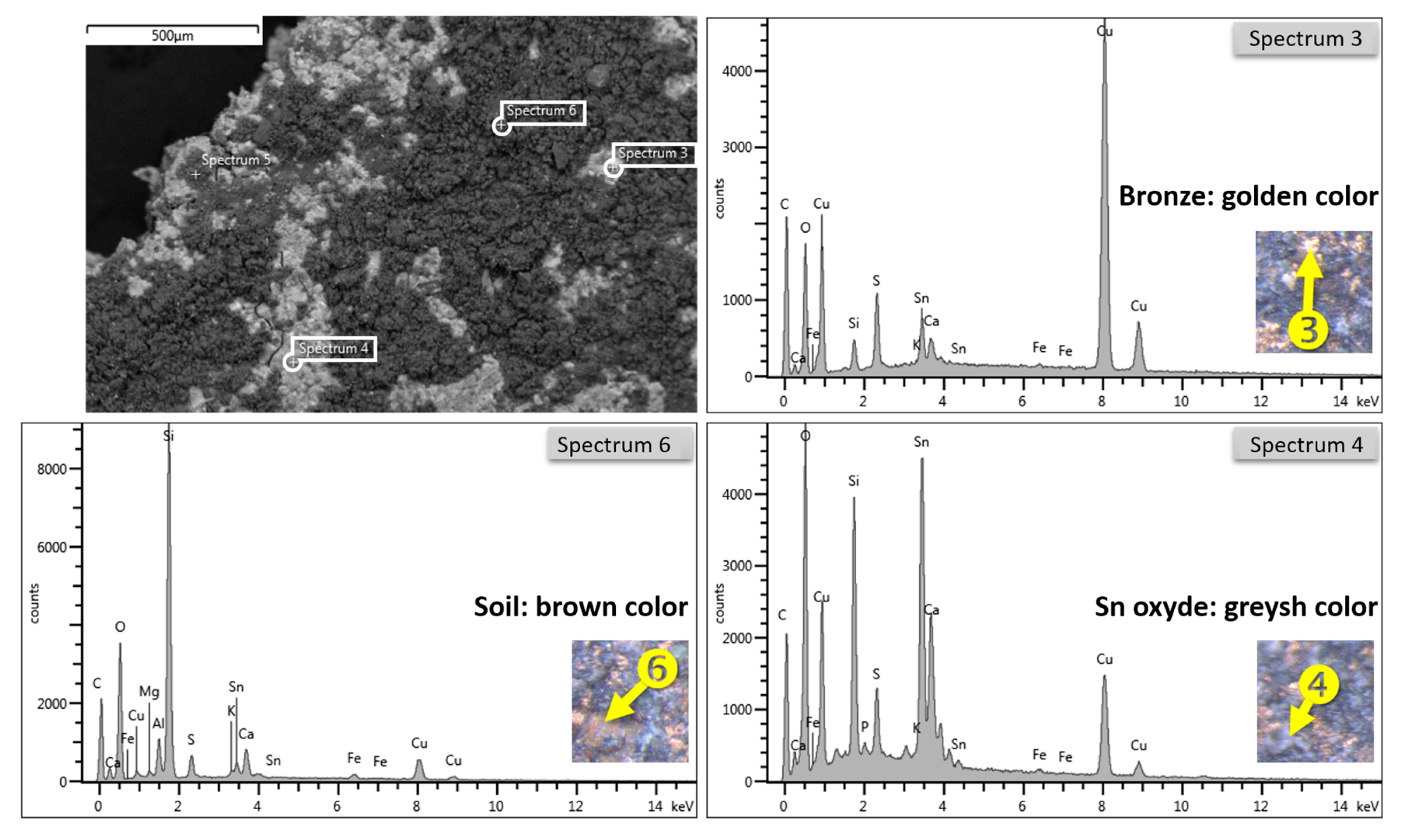 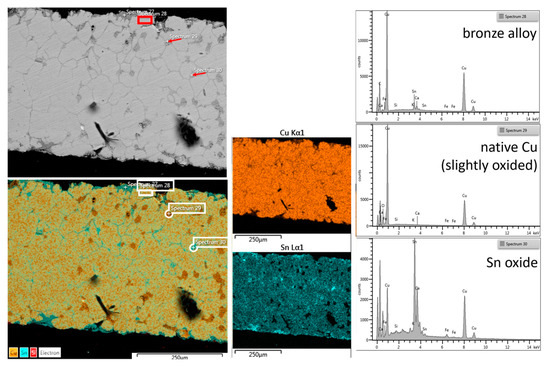 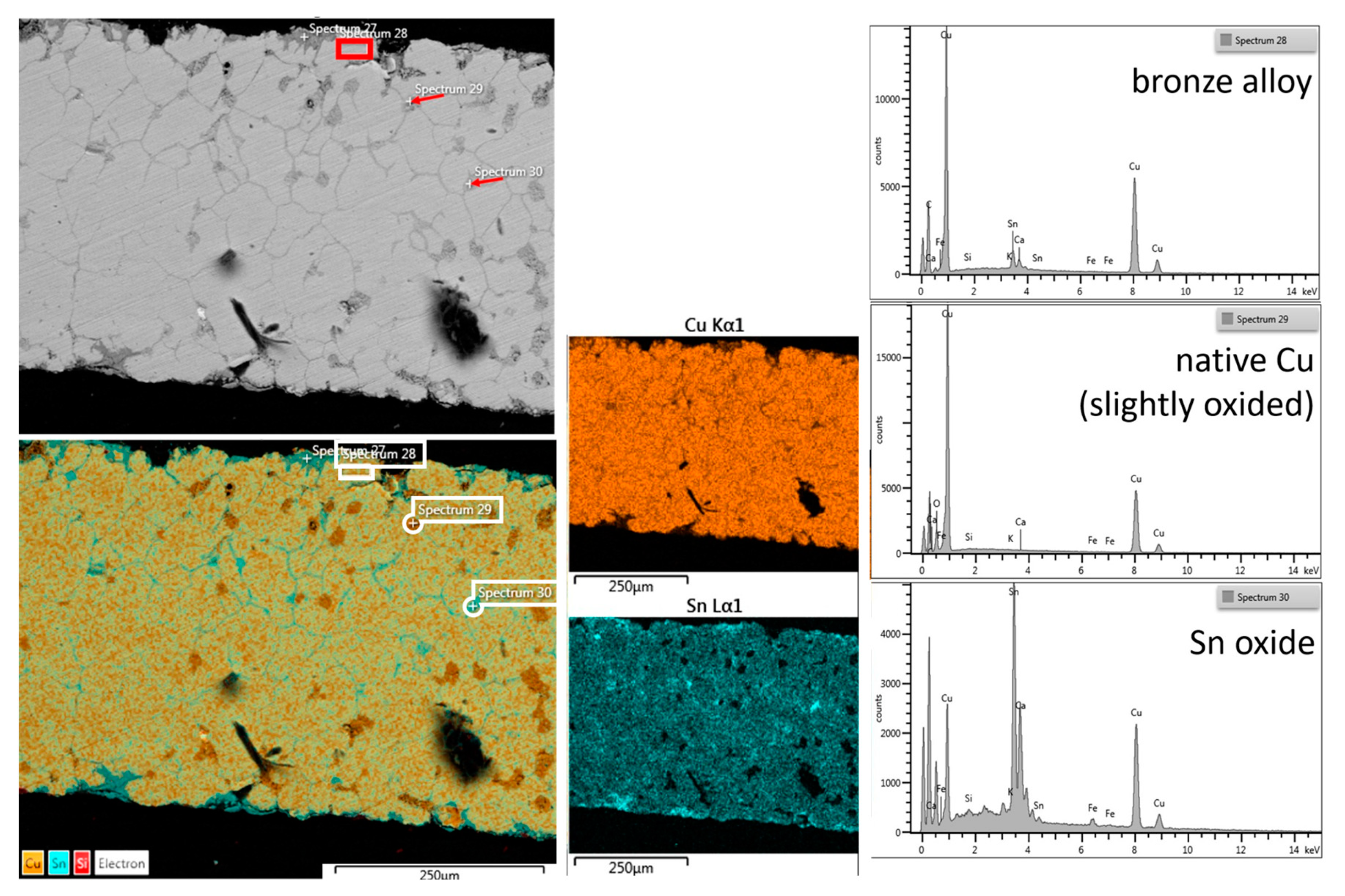 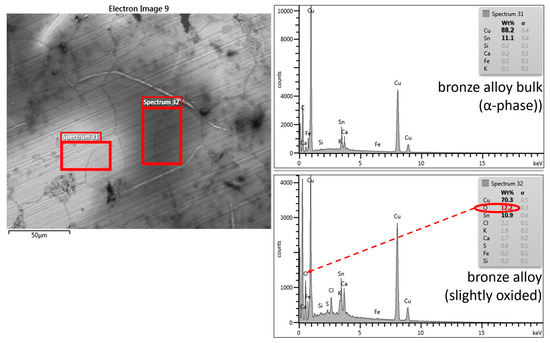 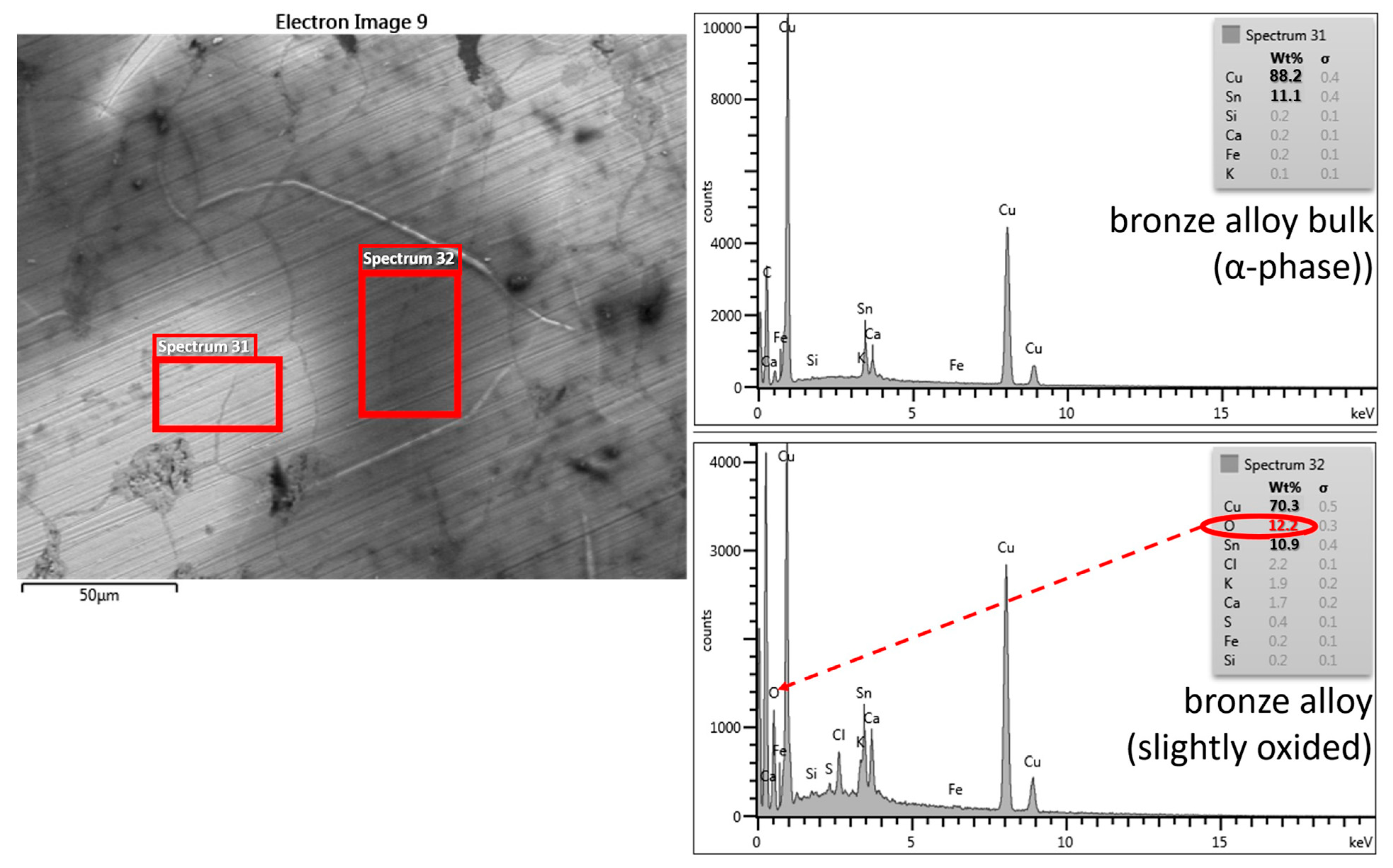 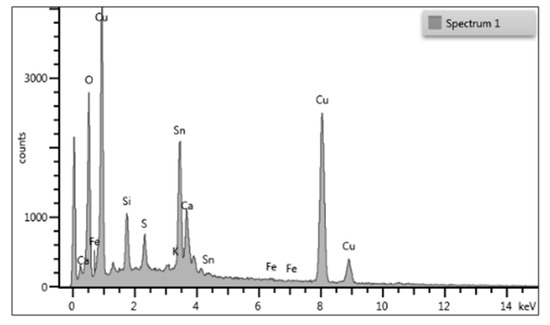 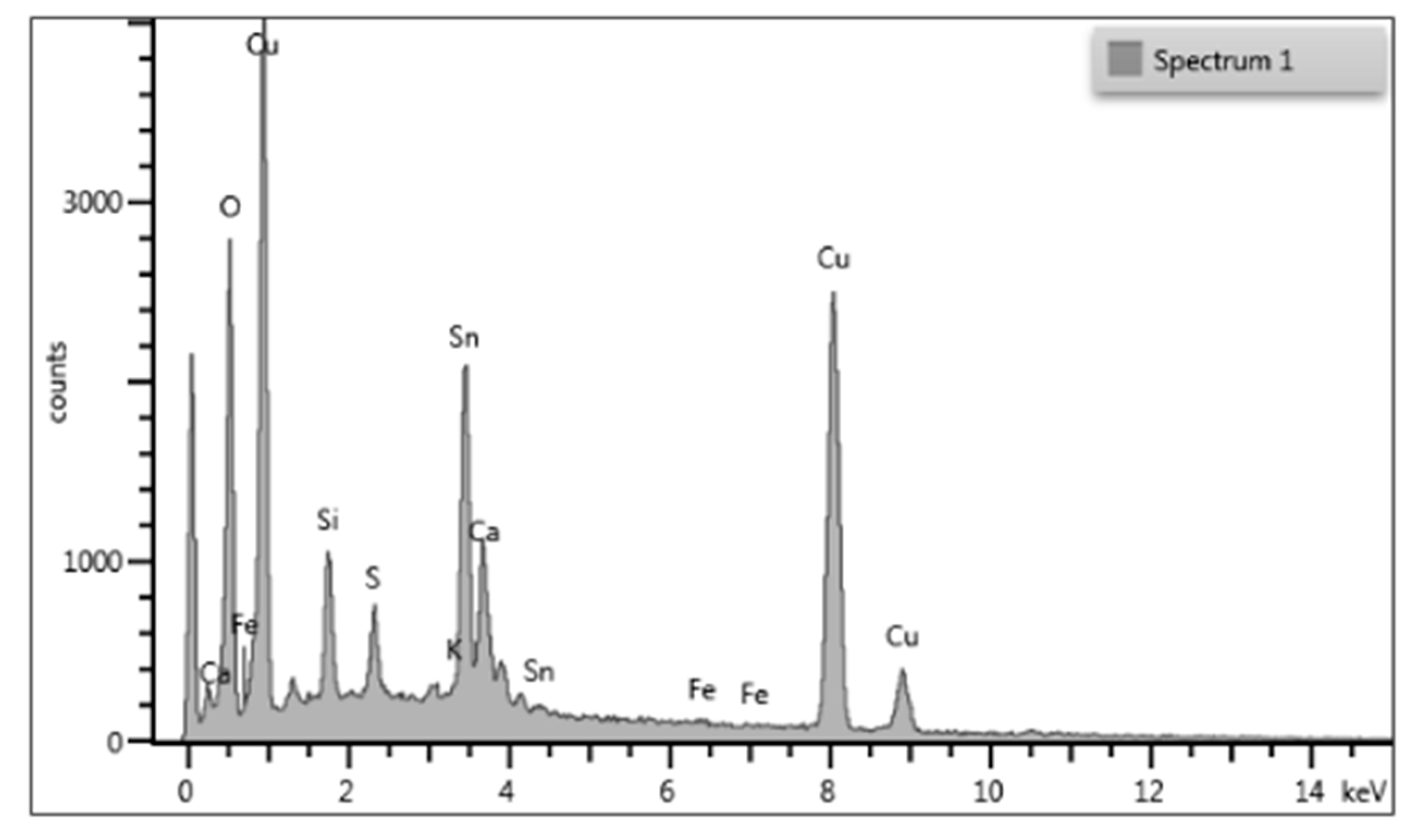 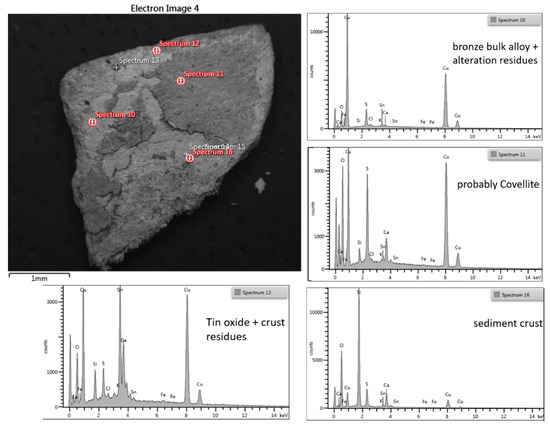 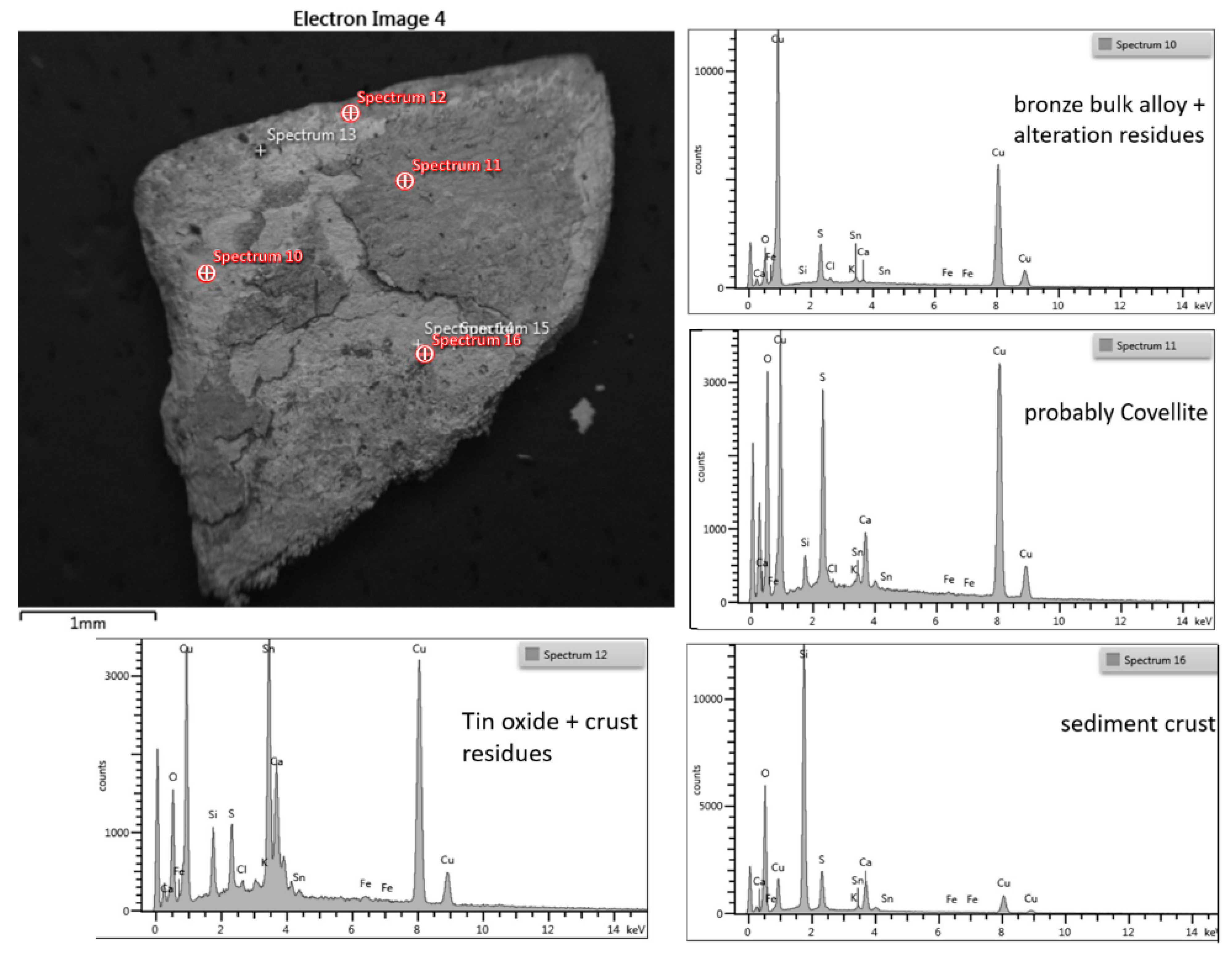 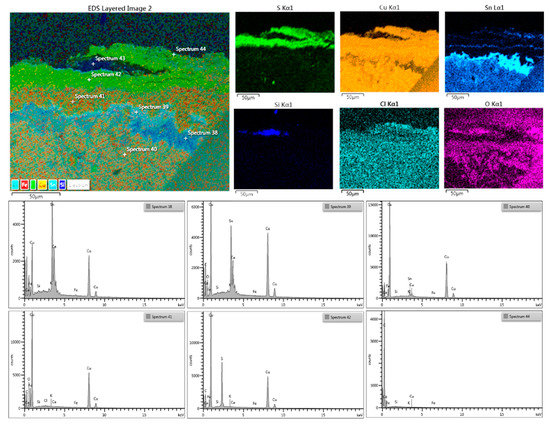 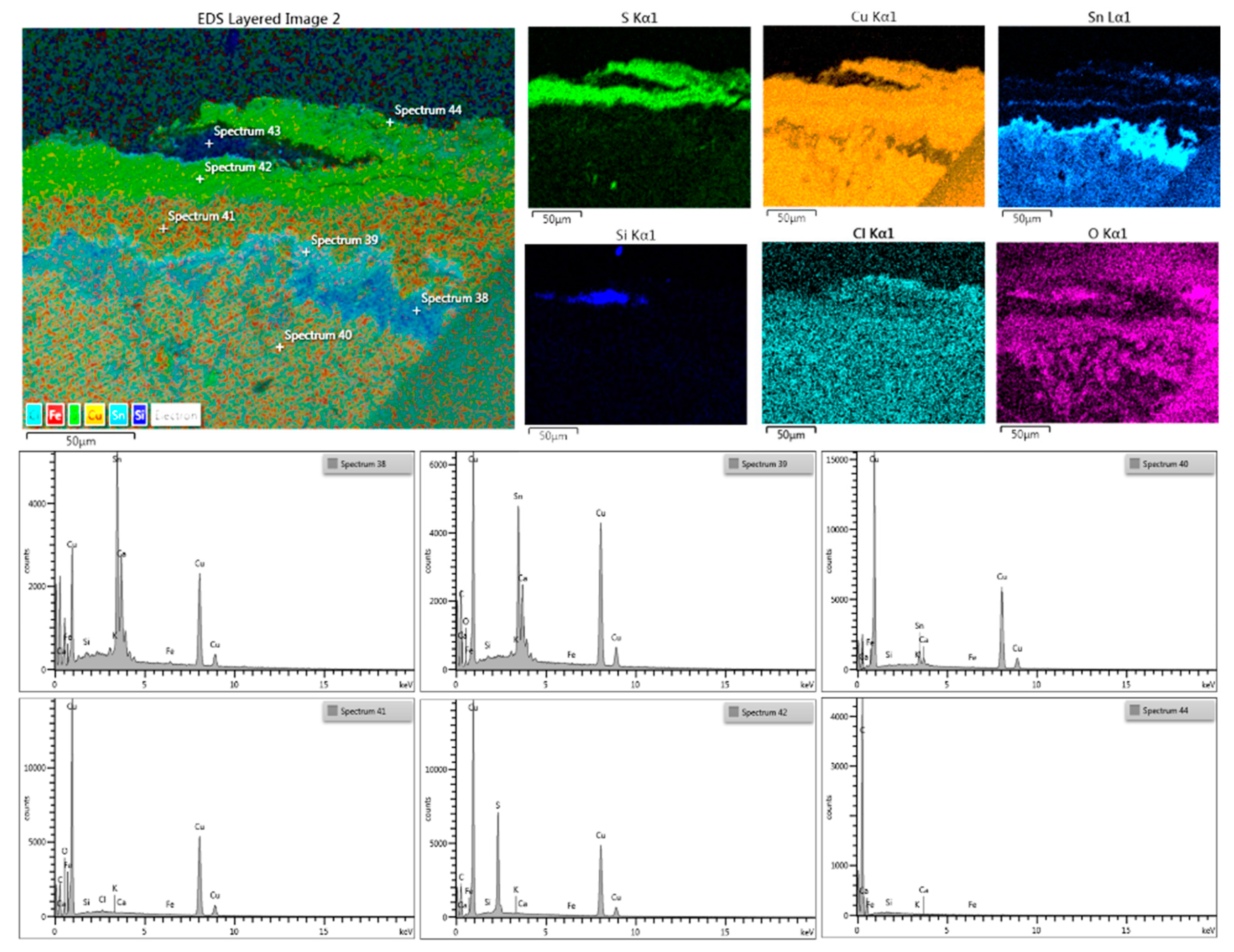 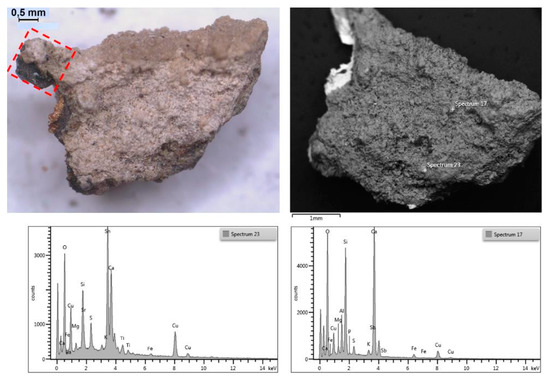 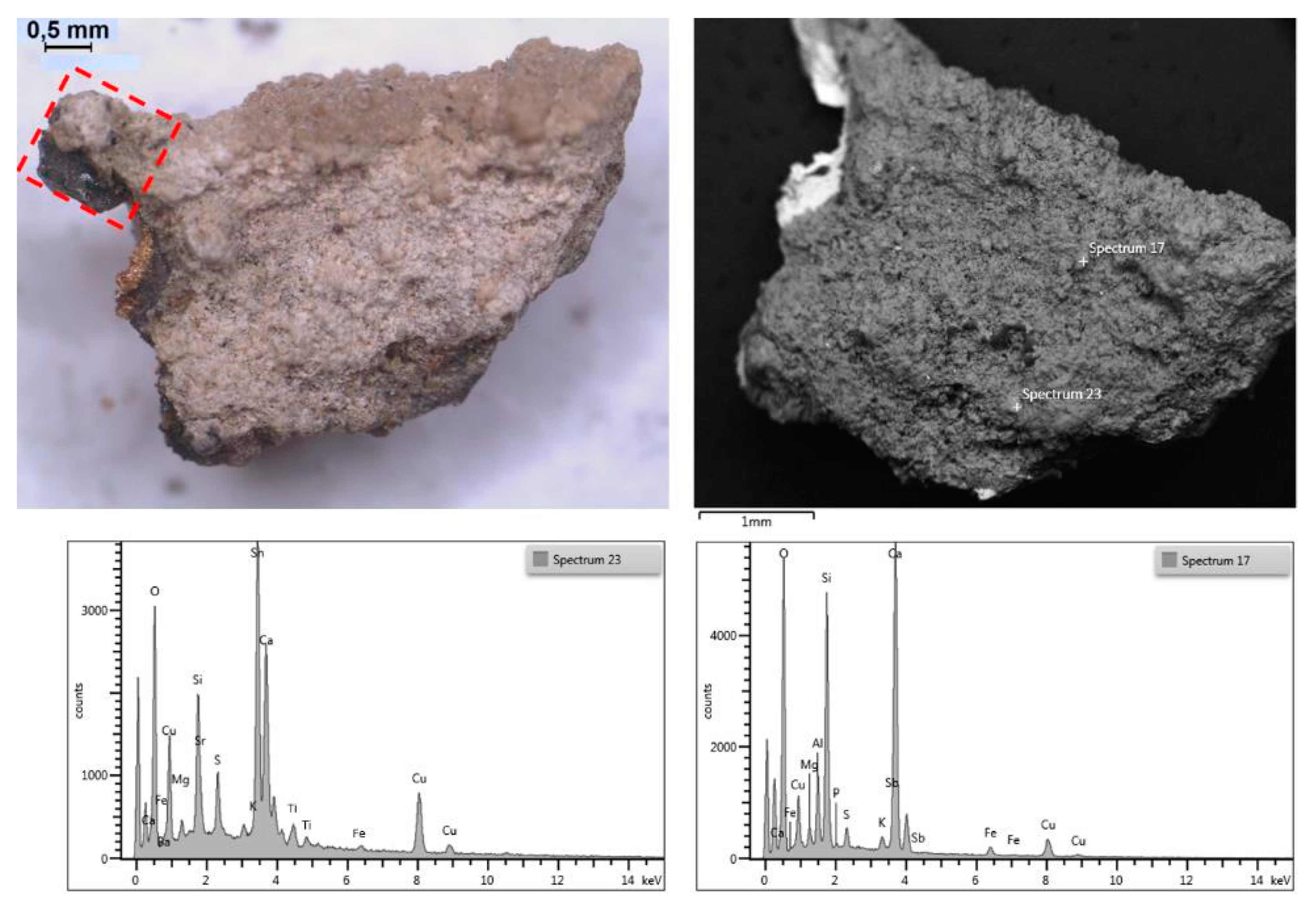 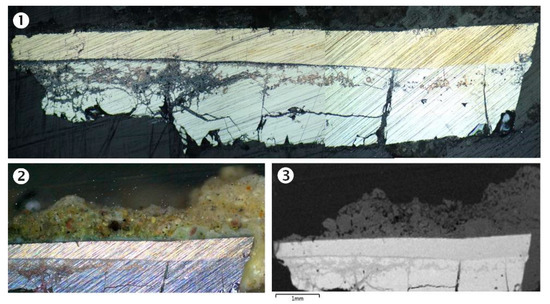 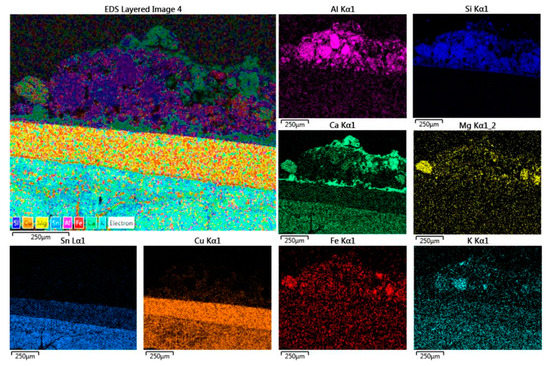 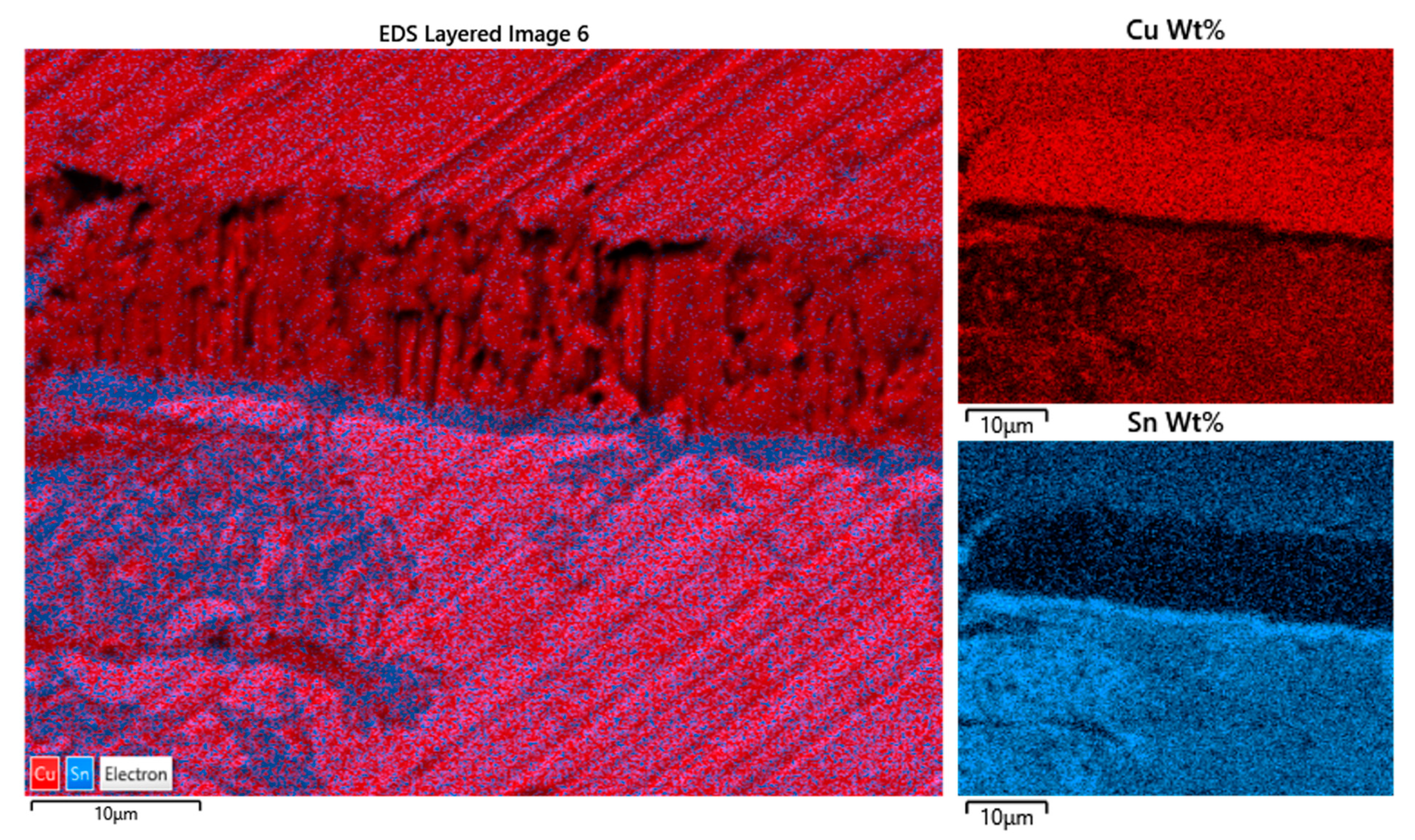