Underwater Cultural Heritage as an Engine for Social, Economic and Cultural Development. State of Research at the University of Cadiz (Andalusia, Spain)
Next Article in Special Issue

Fluorosilane Water-Repellent Coating for the Protection of Marble, Wood and Other Materials

The preservation of cultural heritage monuments and artifacts requires the development of methods to produce water-repellent materials, which can offer protection against the effects of atmospheric water. Fluorosilanes are a very promising class of materials, as they act as precursors for the formation of low surface energy polymer networks. 1H,1H,2H,2H-perfluorooctyl-triethoxysilane is applied on marble, wood and the surfaces of other materials, such as glass, silicon wafer, brass, paper and silk. According to the measurements of static water contact angles, it is reported that superhydrophobicity and enhanced hydrophobicity are achieved on the surfaces of coated marble and wood, respectively. Hydrophobicity and hydrophilicity were observed on the treated surfaces of the other materials. More important, water repellency is achieved on any hydrophobic or superhydrophobic surface, as revealed by the very low sliding angles of water drops. The study is accompanied by colorimetric measurements to evaluate the effects of the treatment on the aesthetic appearances of the investigated materials. Finally, the capillary absorption test and a durability test are applied on treated wood and marble, respectively.
Keywords: hydrophobic; superhydrophobic; water repellent; fluorosilane; contact angle hydrophobic; superhydrophobic; water repellent; fluorosilane; contact angle

The preservation of the cultural identity may be accomplished by the promotion of the remaining monuments, buildings and artifacts of the cultural heritage. Modern conceptions of conservation strategies are seen as integrated economic development approaches, similar to parallel processes of improving infrastructure and promoting cultural projects [1]. Thus, it turns out that the preservation, restoration, documentation and promotion of the cultural heritage is a sustainability obligation. Conservation products, which have been developed to protect cultural heritage objects and buildings against environmental pollution, human interventions or natural deterioration, should fulfill specific requirements. The activities and applications of these materials depend heavily on their chemical composition and structure.
Alkoxysilanes, for instance, are widely used for the protection and consolidation of buildings, mainly due to their low viscosity, which allows them to penetrate deep into the interior of the natural stone [2]. Upon application, the small silane and siloxane molecules are polymerized in situ through a sol-gel process, forming a polysiloxane network that improves the mechanical stability and durability of the treated stone [2,3]. Moreover, the application of carefully designed sol-gel processes can result in the production of superhydrophobic and water-repellent polysiloxane materials [4,5], which apparently offer enhanced protection against the degradation effects of atmospheric water. Superhydrophobicity is defined by the very large static water contact angle (typically > 150°), whereas a water-repellent surface is characterized by the low sliding angle of water drop (typically < 10°). Nanocomposites, which consist of nanoparticles embedded in polysiloxane networks, are a new class of advanced materials, designed for the protection of stone [6,7,8,9,10,11,12,13,14,15,16]. Extreme hydrophobicity or even superhydrophobicity is achieved on the surfaces of these nanocomposites, as the additives—nanoparticles promote surface roughness [6,7,8,9,10,11,12,13,14,15,16]. According to the Cassie-Baxter model, which is commonly used to describe non-wetting phenomena, the hydrophobic character of any material is enhanced with surface roughness [17].
The replacement of hydrogen (H) atoms with fluorine (F) atoms in a polymeric structure enhances its ability to endure heat, light, flame, moisture or chemicals [18]. Moreover, F atoms reduce the surface energy of the material and hence increase hydrophobicity. For these reasons, fluorinated polymers have been extensively investigated and suggested for the conservation of buildings and objects of the cultural heritage that are exposed to atmospheric conditions [19,20,21,22,23,24,25].
The static and the sliding angles of a water drop on a surface are used to assess the hydrophobic/hydrophilic and water-repellent/adhesive character of the surface, respectively. It is stressed that hydrophobicity is not always accompanied by water repellency. For example, the surface of rose petal shows superhydrophobicity (i.e., the static water contact angle is >150°), and yet the water drop remains pinned on this natural surface even if it is turned upside down, implying high drop adhesion (i.e., the sliding angle cannot be practically measured) [26,27]. Therefore, both static and sliding angles are important to characterize the wettability of a surface. It turns out that for practical applications such as the protection of buildings that are exposed to outdoor conditions, water repellency (i.e., a small sliding angle of water drop) is the key, desirable property. Only on a water-repellent surface does the water drop roll off the surface easily, collecting dirt along the way (self-cleaning scenario) [28].
As described above, contact angle measurements are extremely important in order to study the interaction of water with a material designed for the protection of cultural heritage. Moreover, the evaluation of the color parameters after the application of protective coatings onto materials of cultural heritage is essential, since the alteration of the original hue is forbidden.
The goal of the present study is to investigate the efficacy of 1H,1H,2H,2H-perfluorooctyl-triethoxysilane (FAS) to induce hydrophobicity, and more importantly water repellency, on various cultural heritage materials such as marble, wood, glass, brass, paper and silk. More experiments are carried out on marble and wood (capillary absorption test and a durability test), which are commonly found in buildings and objects exposed to atmospheric water. Moreover, a silicon (Si) wafer is included in the investigation, as this is a smooth surface that is commonly used in wettability studies. Finally, colorimetric measurements are carried out.

FAS silane solution was prepared by 1H,1H,2H,2H-perfluorooctyl-triethoxysilane (97%) (C14H19F13O3Si) (CAS# 51851-37-7, Sigma Aldrich, St. Louis, MO, USA). One gram of FAS was mixed with 99 g of ethanol (ChemLab, >98%) and stirred for 2 h while pH was over 8. Most materials that were treated with the FAS solution were obtained from the local market: blocks of white (Thassos) marble and beech wood, glass slides, filter paper (Whatman No 4), polished brass specimens and silk. As for silicon (Si) wafers, these were obtained from Siegert Wafer (Aachen, Germany). Except for silk and paper, substrate materials were washed with tap water then rinsed with deionized water and acetone. They remained in ambient conditions for 4 days in order to dry, while for total moisture removal, the specimens were placed in a Thermconcept oven (KL 15/12) for 48 h at 80 °C. Blocks of marble and wood with dimensions of 5 cm × 5 cm × 2 cm and 2 cm × 2 cm × 2 cm, respectively, were used.
The colorless sol was deposited onto marble, glass, Si wafer, brass, paper and silk using a Da Vinci Forte Basic No 4 brush. Six brush strokes were applied, with each covering being applied to the opposite direction of the previous one after the previous one had dried. Wood specimens were treated with the dip-coating method: samples were partially immersed by 1 cm in the sol for 50 h. After coating deposition, samples were left to dry. Coated and uncoated samples were weighted to measure the coating uptake.

Static contact and sliding angles were measured using an optical tensiometer apparatus (Attension Theta, Gothenburg, Sweden). Three drops of distilled water were placed at three different spots on coated substrates. For the measurements of the sliding angles, the tilt rate was adjusted to 1°/s. Colorimetric measurements were carried out using a MiniScan XE Plus spectrophotometer (HunterLab, Reston, VA, USA), and the results were evaluated using the L*, a*, b* coordinates of the CIE 1976 scale [29]. The reported results are averages of three measurements. The silane uptake was measured gravimetrically (Sartorius, Göttingen, Germany).
Compared to other materials, more tests were carried out on wood and marble, which are of particular interest. For water absorption by the capillary effect, the pre-weighted wood specimen was placed with the coated side downwards into a vessel with distilled water for 2 h at ambient conditions. The weight was then recorded every 5 min, after removing softly the extra moisture from the coated surface. The calculation was carried out via the fraction below (1), where wi (g) is the specimen mass at each ti time interval, w0 (g) is the initial mass, and A (cm2) is the area of the dipped surface.
The durability of the FAS coating on marble was evaluated following a test that combined mechanical and chemical treatment, as follows: the coated marble surface was gently scratched for 30 s with a brush that had been immersed in acetone. The static contact angle was measured on the treated marble surface after the cleaning process, which was repeated until the surface obtained hydrophilic properties.

1H,1H,2H,2H-perfluorooctyl-triethoxysilane was applied on marble, wood, glass, silicon wafer, brass, paper and silk samples. Static water contact angles ranging from 155° (for coated marble) to values lower than 90° (for coated paper and silk) were measured on the different treated materials. Low sliding angles of water drops (<6°) were measured on coated materials, except for the hydrophilic paper and silk. Consequently, it is reported that water repellency was achieved on coated marble, wood, glass, silicon wafer and brass. The application of the FAS coating induced negligible and considerable color changes to marble and paper (ΔE* < 0.5) and to wood and glass (3.0 < ΔE* < 5.5), respectively. The treatment had a major effect on the aesthetic appearances of silicon wafer, brass and silk (ΔE* > 13). The capillary rise test was carried out on coated wood and showed that the FAS coating offered practically no protection against the absorption of water. Finally, a quick, preliminary test showed that the FAS coating on marble exhibits good durability. However, the durability and the behavior of the FAS coating after accelerated aging conditions or prolonged natural aging should be tested in the future.

Data available on request from the authors.

The authors would like to thank E. Pavlidou and C. Papoulia (Aristotle University of Thessaloniki) for useful discussions. 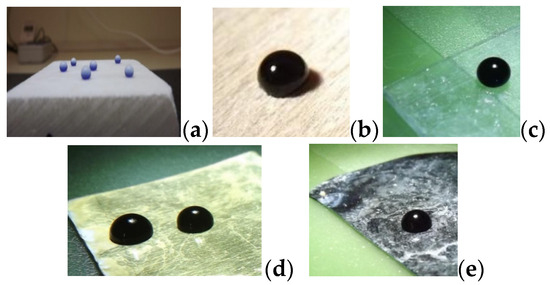 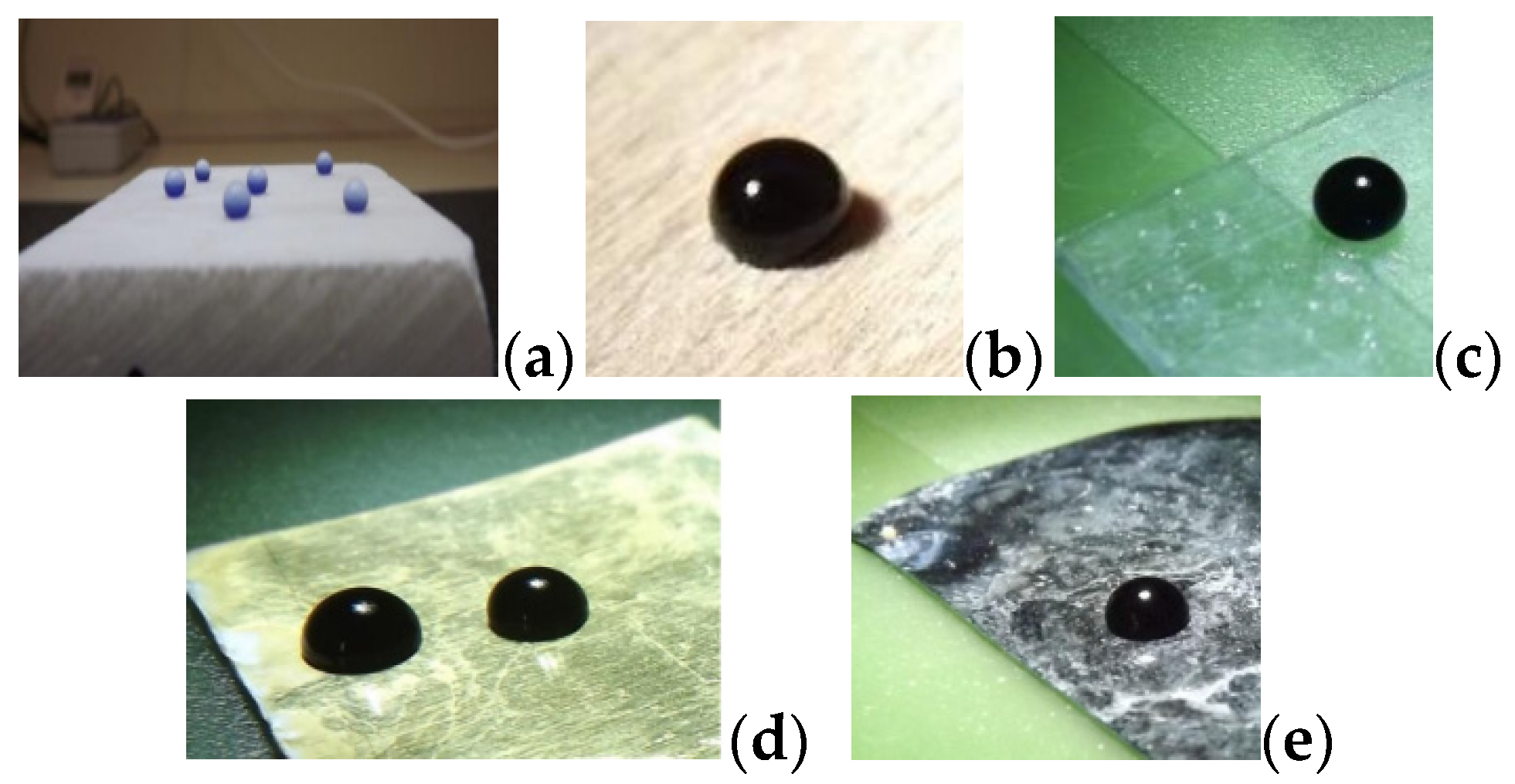 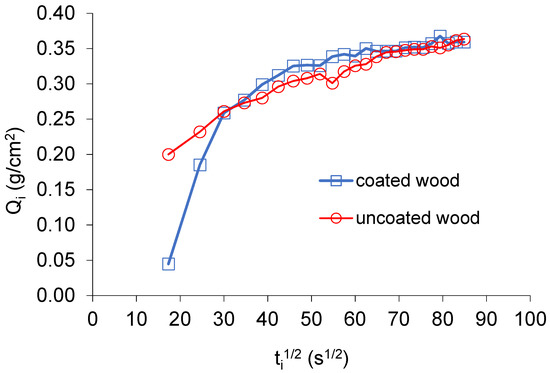 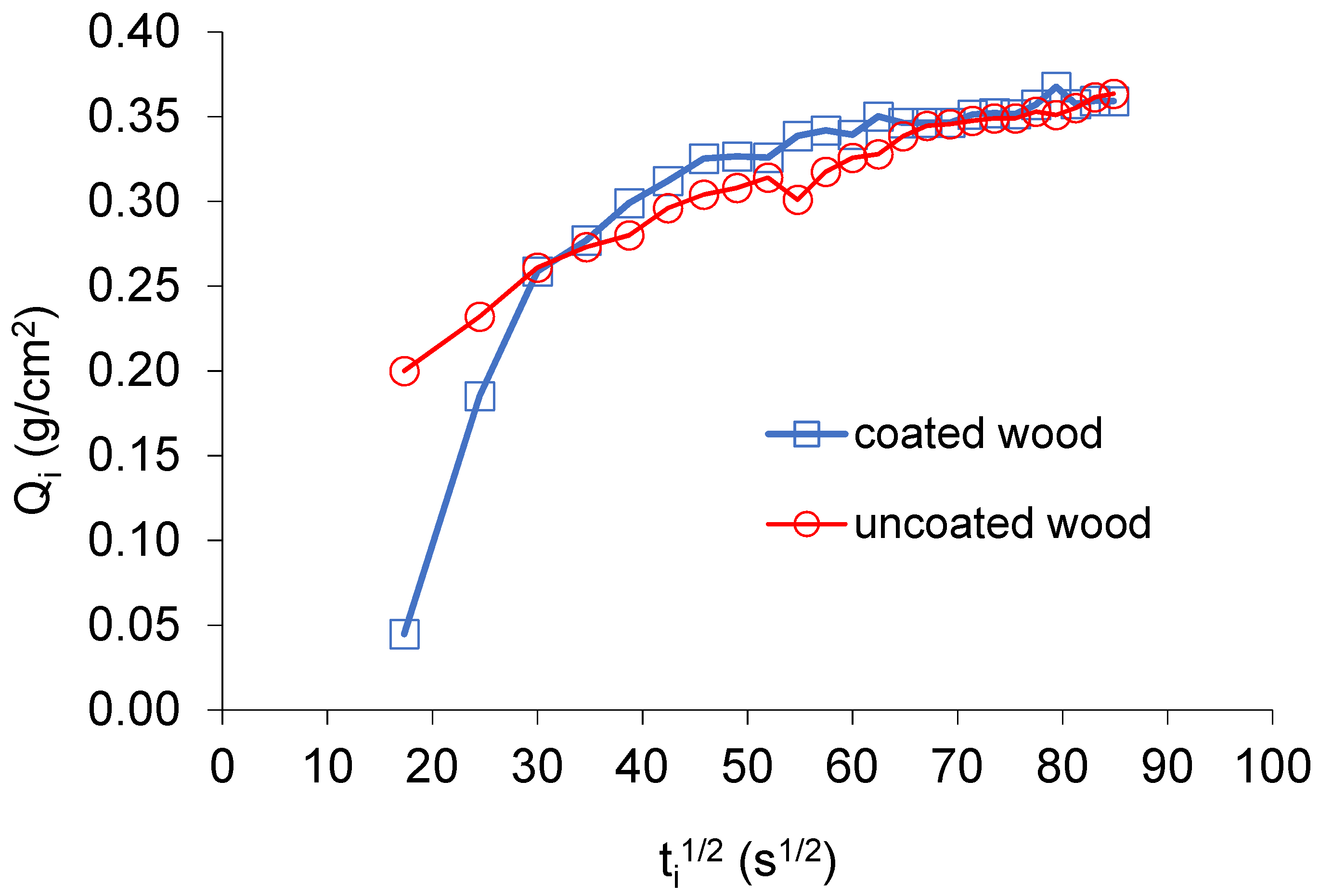 Table 3. Color measurements.
Table 3. Color measurements.
© 2021 by the authors. Licensee MDPI, Basel, Switzerland. This article is an open access article distributed under the terms and conditions of the Creative Commons Attribution (CC BY) license (https://creativecommons.org/licenses/by/4.0/).
We use cookies on our website to ensure you get the best experience. Read more about our cookies here.
Accept
We have just recently launched a new version of our website. Help us to further improve by taking part in this short 5 minute survey here. here.
Never show this again