The Antikythera Mechanism: The Prove of the Accuracy of the Astronomical Calculations Based on It
Next Article in Special Issue

Salting the Earth: Intentional Application of Common Salt to Australian Farmland during the Nineteenth Century
Previous Article in Special Issue

Cultural routes are a well-established development tool to highlight and promote a region’s cultural and environmental reserve, as well as having a positive impact on a region’s socio-economic development. Underdeveloped or rural areas, which have limited financial and technological resources available, often envision cultural routes as a useful development tool to cater to their needs. However, unless these cultural routes are designed and implemented based on the principles of a circular economy or while respecting the region’s cultural identity and heritage, their impact will not be significant. The region of Aitoloakarnania is the poorest prefecture of Greece. The prefecture served as a case study to demonstrate that the utilization of its cultural and architectural heritage can be based on the identification, documentation, and the reveal of paths of cultural tourism along the region’s main natural features, namely its rivers, lakes, lagoons, and coastline. Τhe density and the representative distribution of the monuments in the area, in combination with the unique natural environment of the prefecture, led to the configuration of a mild design of cultural routes, promoting the revealing of both the cultural and the natural landmarks of Aitoloakarnania. In this framework, certain cultural paths were defined. The first one, along the Acheloos River, includes sites of natural heritage, ancient and medieval monuments (castles, fortifications, monasteries, churches, burial sites, archaeological sites, etc.). The other cultural path regards sites along the Evinos River and Trichonida Lake, which includes similar monuments and traditional settlements. A similar cultural path regards cultural sites and points of interest along the coastal parts of the prefecture, and in particular, a path initiating from the historic city of Nafpaktos and following the route to the west, it reaches the Venetian castle of Plagia, opposite of Lefkada. These cultural paths fuse along their routes sites of natural heritage, sites of archaeological and cultural interest, and sites of historic importance to the region. This amalgamation of different types of cultural sites, integrated into a single cultural entity, provide the means for the local and regional development in a sustainable approach while ensuring and disseminating the region’s brand and history. View Full-Text
Keywords: cultural paths; regional development; Aitoloakarnania cultural paths; regional development; Aitoloakarnania
►▼ Show Figures 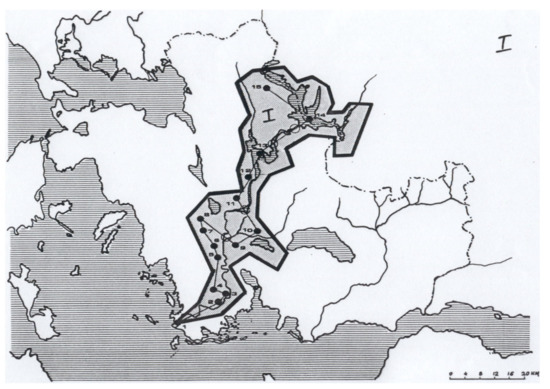