From Conventional to Precision Fertilization: A Case Study on the Transition for a Small-Medium Farm

At the CREA research facility of Treviglio (Bergamo, Italy), to provide farmers with valuable hints for the transition from conventional to precision agriculture, information on crop production dynamics (Maize and Triticale) has been obtained using real-time soil mapping (resistivity technique) and production quality and quantity monitoring with a commercial yield mapping apparatus. The geostatistical processing of data resulted in the same zoning for Triticale, meaning that the characteristics of soil influenced crop behavior more than the variability resulting from other factors, which suggests that improvements in product yields can be planned and achieved acting, for instance, on variable rate distribution of fertilizers. The importance of the acquired data can help farmers to manage factors that are external to their plots of land.
Keywords: soil mapping; electro-magnetic induction; harvest monitoring; farming activity transition management soil mapping; electro-magnetic induction; harvest monitoring; farming activity transition management

According to Precision Agriculture (P.A.) principles, managing arable lands means considering the inherent variability of the cultivation and that generated by external factors in such a way that both farmers’ profitability and environmental stewardship turn out to be increased [1,2,3]. Moreover, steady (or less variable) conditions, such as soil and boundary conditions, topography, hydrographic network, and their interactions with intrinsic variables, must be considered [4,5]. Farming tasks, i.e., cultivation, seeding, fertilization, herbicide application, and harvesting, can be carried out by linking the mapped variables to appropriate farming decisions. Thanks to Global Navigation Satellite System technology and sensors’ development, such actions can currently be carried out with improved accuracy, reduced energy needs, and better timeliness. In particular, sensors can be used both in-situ and on-the-go recording modes, which enables the site-specific knowledge of soil status (e.g., apparent electrical conductivity sensors, gamma-radiometric soil sensors, and soil moisture devices), weather information, and physiological status of crops (e.g., nitrogen sensors). At the same time, the acquisition of farm-level imagery allows the transformation of the collected geo-referenced data into maps that are helpful in setting up management plans aimed at increasing farming efficiency throughout the years. When concerning crop production, prescription mapping is essential: if, on the one hand, any plant needs water, nutrients, and carbon dioxide for its growth, on the other, soil heterogeneity and topography unavoidably affect the production dynamic [6].
Transitioning from conventional to precision agriculture practices requires farmers to adopt specific technology [7]. However, farmers are conservative, so increasing their trust in these technologies is essential in facilitating the new technology breakthrough [8,9]. Trust is built when users have a clear conception of the appliance’s functionality, even though they do not know all of the details [10]. Introducing guidelines aimed at promoting new agro technical patterns that are based on P.A. principles could help to strengthen the confidence of farmers: the parallel set up of applicative examples and references (the so-called Living Labs) could also foster the adoption of such guidelines [11].
Following the national public consultation on precision farming that the Italian Ministry of Agriculture [12] set up to increase overall farming sustainability, at the CREA research facility of Treviglio (Italy), precision farming trials have been carried out that introduced soil mapping, followed by harvest monitoring, as the first steps. In this work we focused on the steps required for the assessment of prescription maps to improve crop production in light of the in-field variability with a twofold objective: (i) setting up an appropriate management plan that enables overcoming the site-specific limiting factors and improving crop yield uniformity, (ii) providing farmers with valuable hints to help them in the transition from conventional to precision agriculture to go beyond state of the art.

The CREA experimental site (Figure 1) is located in Treviglio, Northern Italy (45°31′14″ N; 9°35′27″ E; +128 m a.s.l.): it comprises two experimental tracks, one of which is flanked with 2.00 ha of soil for agriculture machinery and tires testing, and 10.00 ha of experimental fields that are sown with Triticale as winter crop (Triticosecale Wittnack) and Maize (Zea mays). According to World Reference Base for Soil Resources [13], the soil has been classified as Calcic Skeletic Mollic Umbrisol, with neutral-sub alkaline pH and generally carbonates being present from the surface. Before seeding Triticale and Maize, all of the agricultural surface underwent manuring treatment with 100 m3 ha−1 of dairy manure before ploughing and harrowing. Besides seeding, both of the crops were also fertilized with 250 kg ha−1 of urea (46% nitrogen content) when in the jointing phase.

A soil geophysical survey took place using the Automatic Resistivity Profiler (A.R.P.; Geocarta SA, Paris, France). It is a mobile system that consists of four pairs of toothed metal wheels. The first pair functions as injection electrodes, and the other three couples function as receivers, which measure the electrical potential difference (Figure 2). The distance between each pair of receivers was calibrated to investigate three depths (0–50 cm, 0–100 cm, and 0–180 cm).
The raw data were filtered using a 1D-median filter and then interpolated to obtain one soil resistivity map (2 × 2 m pixel) for each investigated layer. The locations of soil profiles investigations provided representative coverage of the resistivity values. Therefore, ten soil profiles were opened and described by horizons estimating, for each profile, the volumetric percentage of rock fragments in the 0–50 cm layer. From the 0–50 cm layer, soil samples were collected and analyzed to determine soil organic carbon (S.O.C.), pH in water (soil to water ratio of 1:2.5), particle-size distribution by sieving and sedimentation [14] (sand, 0.05–2 mm; silt, 0.002–0.05; clay, <0.002 mm), and available phosphorus [15].

Triticale and Maize were both harvested to produce silage: the forage harvester (John Deere, Moline, IL, USA) was equipped, alternatively, with maize and whole crop headers, which were both of 6 m working width. The dry matter yield per area unit resulted from the equipment of the harvester with a commercial yield mapping apparatus [16]. It consisted of a global positioning system (G.P.S.), a feed roll linear variable differential transformer sensor, a feed roll speed optical sensor, and a moisture measurement sensor. The working width considered for the calculation of the output was automatically set by the control system of the forager at intervals of 1.5 m. Such a device relates to speed measurements from the G.P.S. to estimate the wet yield per area. The moisture sensor measures moisture and dry matter (D.M.) using near-infrared spectroscopy. Being placed on the machine’s spout, it measures the crop D.M. and estimates the dry yield. It allowed for the realization of the yield maps by coupling crop biomass flow data with those from the G.P.S.

Data underwent geostatistical analysis using “R” statistical software [17] and the “Quantum GIS” (QGIS) software package [18]. Before geostatistical analysis, all of the coordinates that were retrieved by the instruments and mapping services were converted from geographic coordinates (World Geodetic System 84-WGS84) into UTM Cartesian coordinates using the “spTransform” function of the “ rgdal” package [19]. All of the statistical processing took place following the findings of Córdoba et al. [20]. Clustering occurred considering the interaction of the three layers of soil electrical resistivity data (Ω m) and the dry matter yield from the on-the-go sampling of the forage harvester (t ha−1) from the previous year (Figure 3b), and the indices were calculated to achieve the optimum number of clusters. Data visualization and editing were carried out using the QGIS software [21].

The A.R.P. turned out to be a suitable surrogate for detailed and georeferred soil coring: cluster analysis of AR.P. and yield data provided an objective method to identify management zones for targeted sampling activities (e.g., soil nutrients, organic matter, pH, soil remediation, etc.), which enabled setting up and variable rate manure applications.
According to the results, improvements in product yields can be planned and achieved acting on variable rate distribution of fertilizers (manure in particular), while the bordering with uncultivated zones is of secondary importance.
The applied farm management information system allows for the management of high-value crops, efficiently increasing harvest quality and quantity, and helping farmers to make decisions. When transitioning to P.A., the optimized machinery enabling better matching of soil characteristics with crop requirements plays a key role: however, the importance of the acquirable data is not limited to the in-field variability, and it can also help farmers to manage factors from outside their plots of land.
The available information from the processing procedures always requires considering the technical means that are available at the farm level to find the most appropriate practical combination. Finally, the awareness of the optimized inputs is derived from the high quantity of information (mapping and sensing techniques) that could effectively integrate the farmers’ daily experience, which results in increasing perception and reception of precision farming.

Data sharing is not applicable to this article.

The authors would like to thank Roberto Negroni (Agromeccanica Negroni srl, Stezzano, Italy), who provided the geo-referenced yield data and Elia Premoli and Alex Filisetti of the CREA-IT experimental farm of Treviglio (BG), Italy for the setup of the research and data collection. 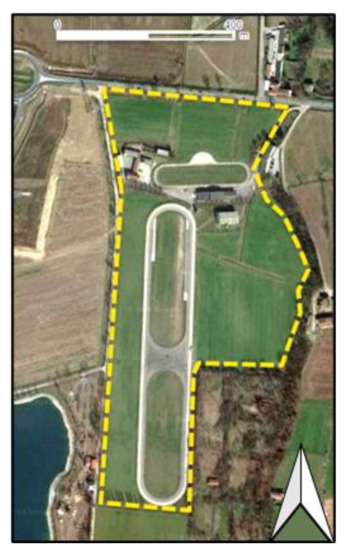 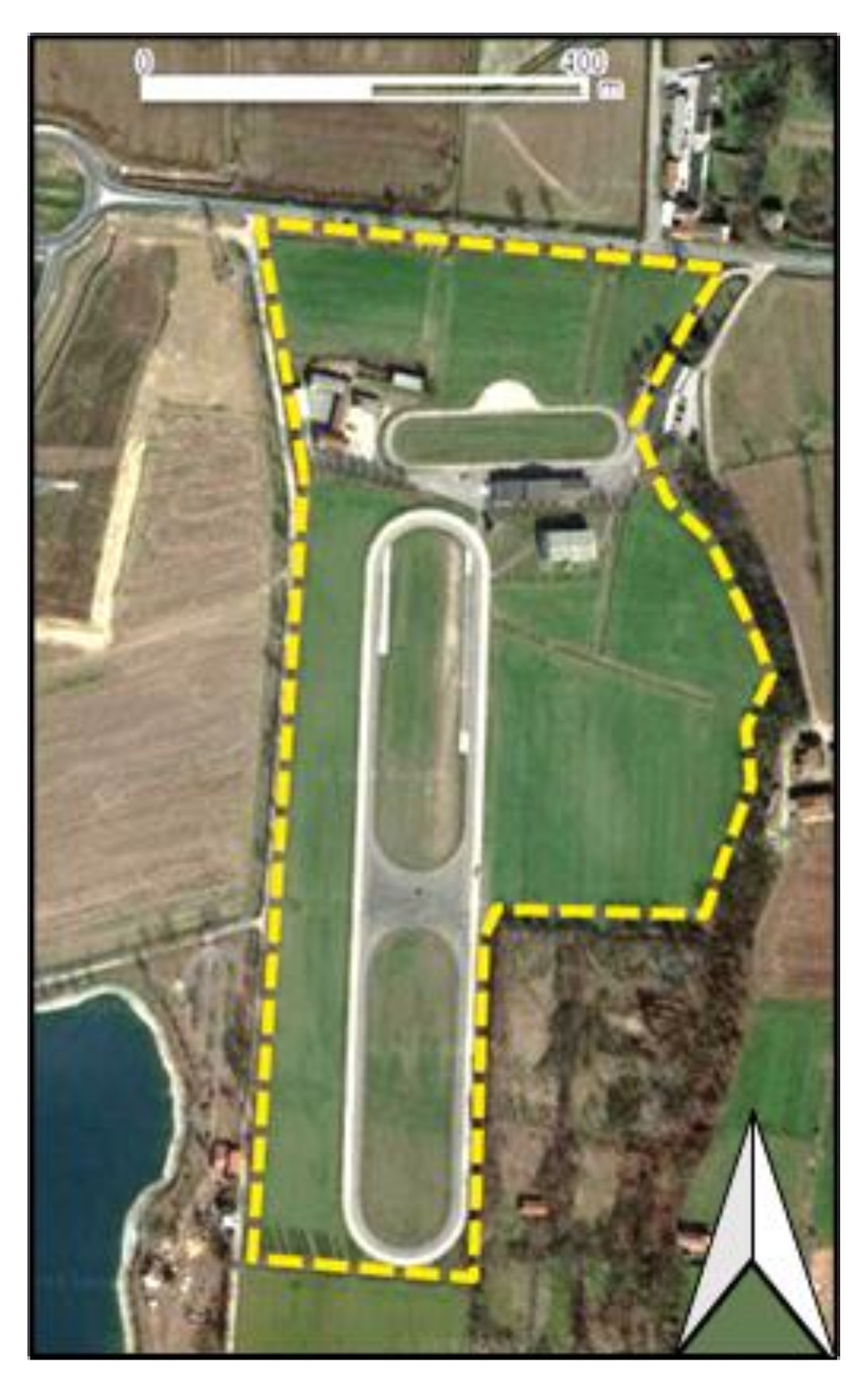 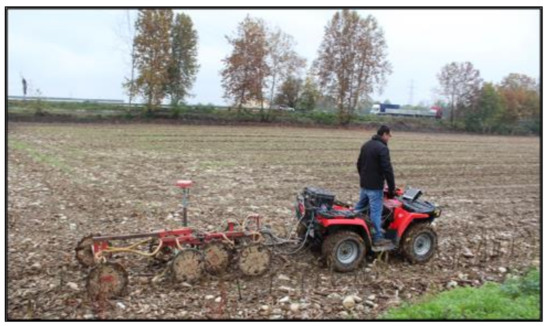 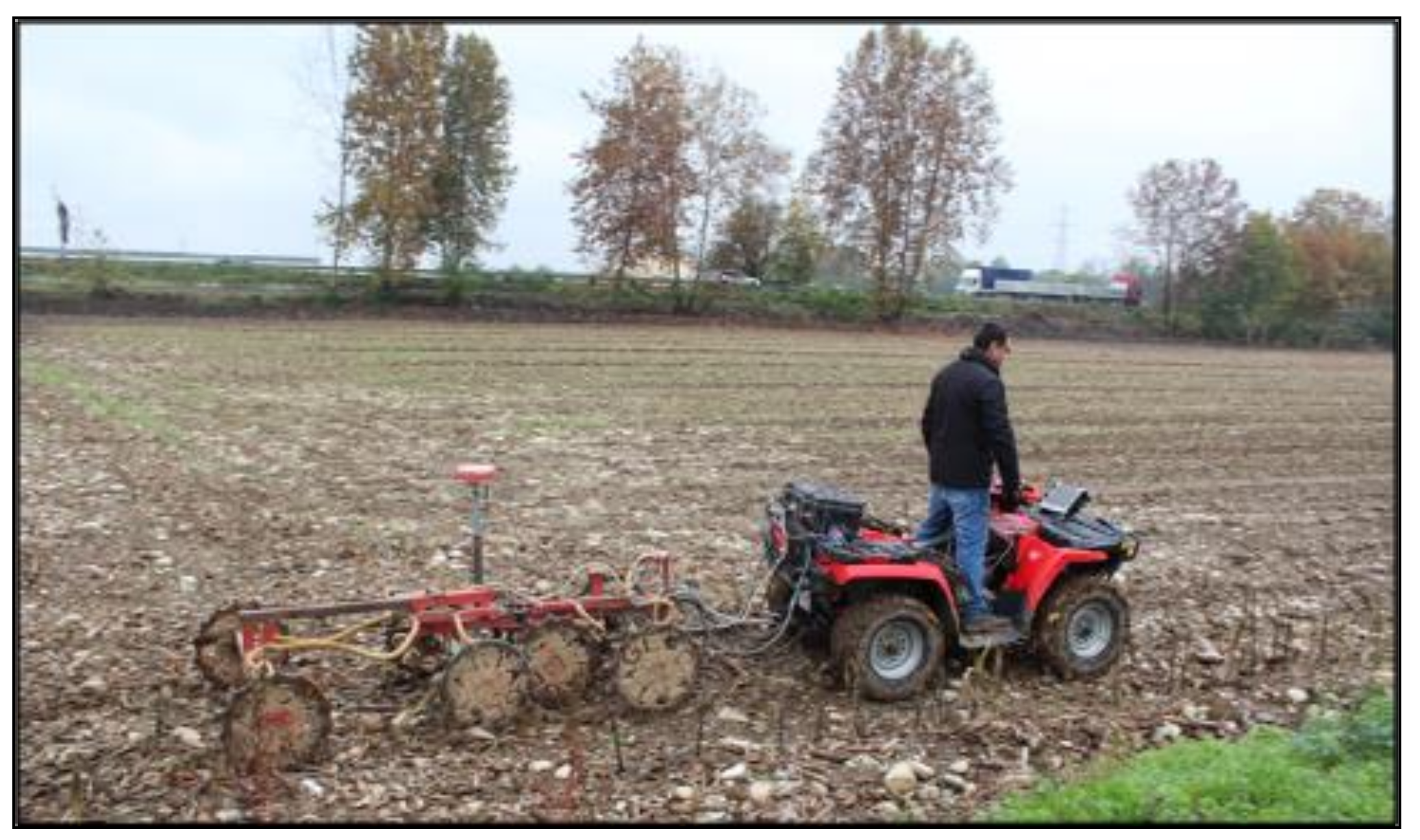 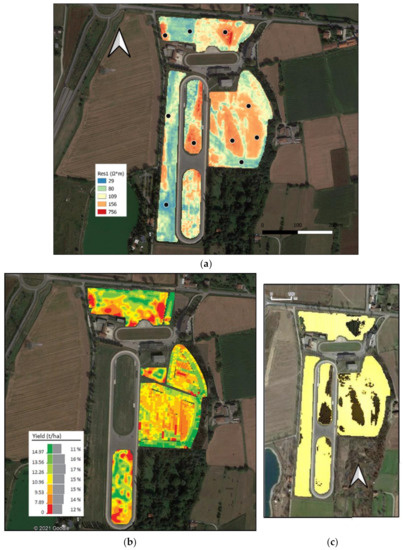 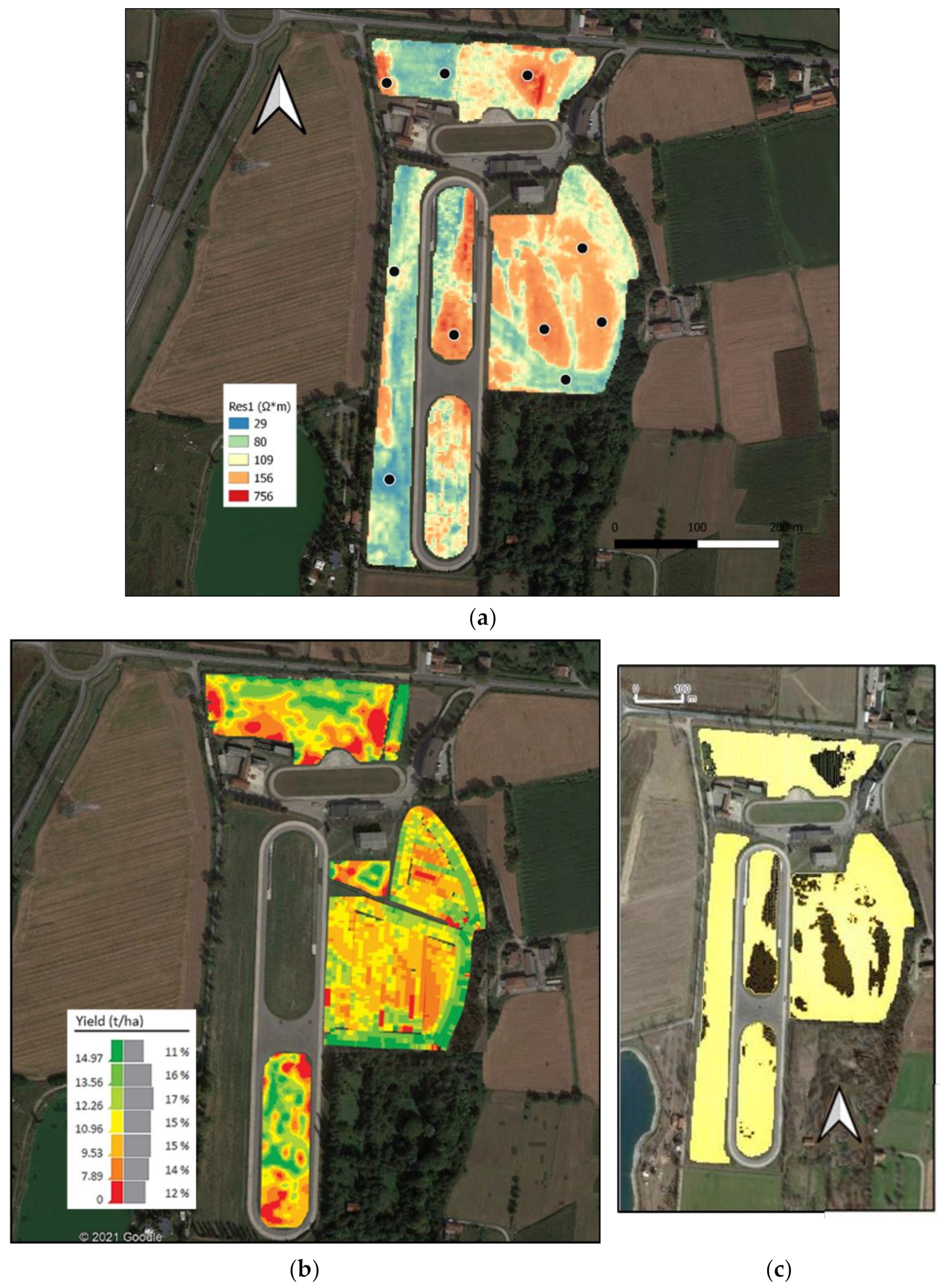