From Conventional to Precision Fertilization: A Case Study on the Transition for a Small-Medium Farm
Previous Article in Special Issue

Broiler productivity is dependent on a range of variables; among them, the rearing environment is a significant factor for proper well-being and productivity. Behavior indicates the bird’s initial response to an adverse environment and is capable of providing an indicator of well-being in real-time. The present study aims to identify and characterize the sequential pattern of broilers’ behavior when exposed to thermoneutral conditions (TNZ) and thermal stress (HS) by constant heat. The research was carried out in a climatic chamber with 18 broilers under thermoneutral conditions and heat stress for three consecutive days (at three different ages). The behavior database was first analyzed using one-way ANOVA, Tukey test by age, and Boxplot graphs, and then the sequence of the behaviors was evaluated using the generalized sequential pattern (GSP) algorithm. We were able to predict behavioral patterns at the different temperatures assessed from the behavioral sequences. Birds in HS were prostrate, identified by the shorter behavioral sequence, such as the {Lying down, Eating} pattern, unlike TNZ ({Lying down, Walking, Drinking, Walking, Lying down}), which indicates a tendency to increase behaviors (feeding and locomotor activities) that guarantee the better welfare of the birds. The sequence of behaviors ‘Lying down’ followed by ‘Lying laterally’ occurred only in HS, which represents a stressful thermal environment for the bird. Using the pattern mining sequences approach, we were able to identify temporal relationships between thermal stress and broiler behavior, confirming the need for further studies on the use of temporal behavior sequences in environmental controllers. View Full-Text
Keywords: animal welfare; animal behavior; behavioral pattern detection; sequential pattern mining animal welfare; animal behavior; behavioral pattern detection; sequential pattern mining
►▼ Show Figures 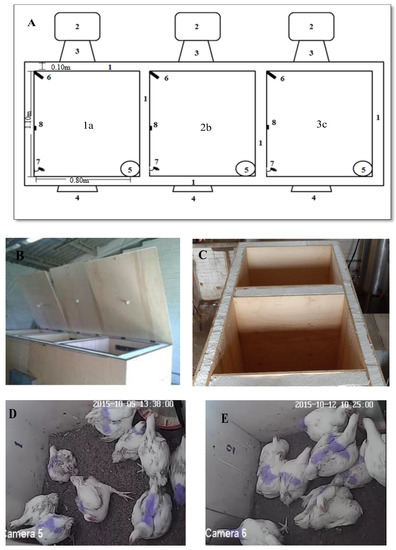