Nearshore coastal waters are among the most dynamic regions on the planet and difficult to sample from conventional oceanographic platforms. It has been suggested that environmental sampling of the nearshore could be improved by mobilising vast numbers of citizens who partake in marine recreational sports, like surfing. In this paper, we compared two approaches for measuring sea surface temperature (SST), an Essential Climate Variable, when surfing. One technique involved attaching a commercially-available miniature temperature logger (Onset UTBI-001 TidbiT v2) to the leash of the surfboard (tether connecting surfer and surfboard) and the second, attaching a surfboard fin (Smartfin) that contained an environmental sensor package. Between July 2017 and July 2018, 148 surfing sessions took place, 90 in the southwest UK and 58 in San Diego, California, USA. During these sessions, both Smartfin and leash sensors were deployed simultaneously. On the leash, two TidbiT v2 sensors were attached, one with (denoted LP) and one without (denoted LU) a protective boot, designed to shield the sensor from sunlight. The median temperature from each technique, during each surfing session, was extracted and compared along with independent water temperature data from a nearby pier and benthic logger, and matched with photosynthetically available radiation (PAR) data from satellite observations (used as a proxy for solar radiation during each surf). Results indicate a mean difference () of 0.13 °C and mean absolute difference () of 0.14 °C between Smartfin and LU, and a of 0.04 °C and an of 0.06 °C between Smartfin and LP. For UK measurements, we observed better agreement between methods ( °C and °C between Smartfin and LU, and °C and °C between Smartfin and LP) when compared with measurements in San Diego ( °C and °C between Smartfin and LU, and °C and °C between Smartfin and LP). Surfing SST data were found to agree well, in general, with independent temperature data from a nearby pier and benthic logger. Differences in SST between leash and Smartfin were found to correlate with PAR, both for the unprotected (LU) and protected (LP) TidbiT v2 sensors, explaining the regional differences in the comparison (PAR generally higher during US surfing sessions than UK sessions). Considering that the Smartfin is sheltered from ambient light by the surfboard, unlike the leash, results indicate the leash TidbiT v2 sensors warm with exposure to sunlight biasing the SST data positively, a result consistent with published tests on similar sensors in shallow waters. We matched all LU data collected prior to this study with satellite PAR products and corrected for solar heating. Results highlight the need to design temperature sensor packages that minimise exposure from solar heating when towed in the surface ocean. View Full-Text
Keywords: ocean temperature; citizen science; coastal; surfers ocean temperature; citizen science; coastal; surfers
►▼ Show Figures 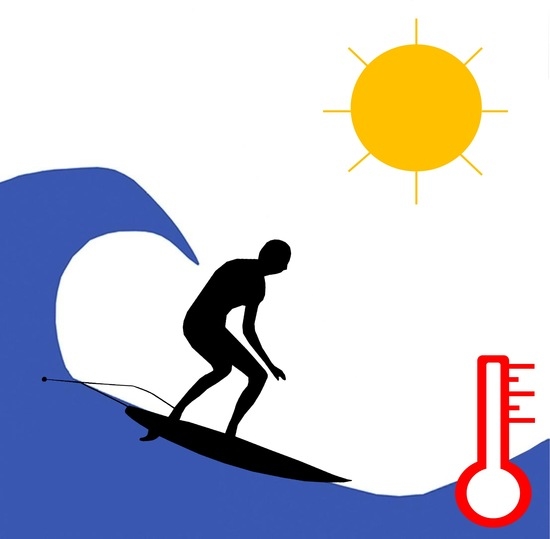