Baseline Survey on the Accumulation of Microdebris in the Intertidal Sediments of a Reference Estuarine System (Mira Estuary, Portugal)
Previous Article in Journal

Myctophids are key members of mesopelagic communities with a world biomass estimated at 600 million tons. They play a central role in oceanic food webs and are known to perform diel vertical migrations, crossing the thermocline and reaching the oxygen minimum zone, however, very scarce information exists on trace element content in these organisms. Therefore, the trace elemental composition (Cr, Mn, Co, Ni, Cu, Zn, As, Se, Cd and Pb) of Triphoturus mexicanus and Benthosema panamense specimens was determined. Zinc (Zn) was the most common trace element for both species, T. mexicanus presented 39.8 µg.g−1 dw and B. panamense 30.6 µg.g−1 dw. Contrasting, for T. mexicanus the less abundant trace element was Ni (0.332 µg.g−1 dw) and for B. panamense was Pb (0.236 µg.g−1 dw). T. mexicanus exhibited significantly higher concentrations of Cr, Cu, Zn and Pb in comparison to B. panamense, and these differences seemed to be related to inherent physiological and/or ecological traits rather than environmental element availability. These diel vertical migrators are crucial in the energy transfer between the deep-sea and epipelagic zones (and vice-versa), and the estimation of the Biomagnification Factor (based on Cu, Zn, Cd and Pb) levels revealed that both T. mexicanus and B. panamense play a major role in trace element transfer to higher trophic levels in the pelagic food web of the Gulf of California. View Full-Text
Keywords: myctophids; Triphoturus mexicanus; Benthosema panamense; trace elements; bioaccumulation; Gulf of California myctophids; Triphoturus mexicanus; Benthosema panamense; trace elements; bioaccumulation; Gulf of California
►▼ Show Figures 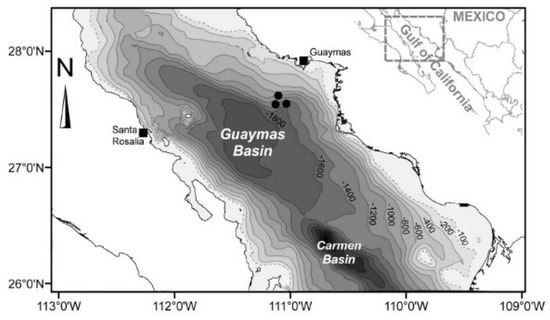