A Partial Phenotype of adFNDI Related to the Signal Peptide c.55G>A Variant of the AVP Gene

The autosomal dominant familial form of neurohypophyseal diabetes insipidus (adFNDI) is a rare inherited endocrine disorder characterized by hypotonic polyuria, severe thirst and polydipsia, which results from a deficient neurosecretion of the antidiuretic hormone, also known as arginine vasopressin (AVP). To date, adFNDI has been linked to more than 70 different heterozygous point mutations of the 2.5 kb AVP gene, encoding the composite precursor protein of AVP. A minority of disease-causing mutations, such as the common c.55G>A variant, are predicted to affect amino acid residues close to the signal peptide (SP) cleavage site, and result in abnormal post-translational processing and intracellular trafficking of AVP precursors exerting neurotoxic activity on vasopressinergic magnocellular neurons. Generally, SP variants cause a gradual decline in the neurohypophyseal secretion of AVP in small children, although a wide variability in clinical onset and severity of manifestations has been reported. For the first time, we describe a kindred from Calabria (Southern Italy) with adFNDI and document a partial clinical phenotype in one female young adult member of the family. Methods: A young adult woman was subjected to clinical, neuroradiological and genetic assessments for a mild, adolescent-onset, polyuric state at our Endocrinology Unit. Her family medical history revealed an early-onset (<12 years of age) occurrence of polyuria and polydipsia, which was successfully managed with high doses of oral desmopressin, and a typical adFNDI inheritance pattern that was seen over three generations. Results: In the index patient, the extensive hypertonic dehydration during fluid deprivation test elicited a prompt elevation of urine osmolality and diuresis contraction, indicative of a partial adFNDI phenotype. Diagnosis was confirmed by concordant hormonal tests and magnetic resonance imaging (MRI) evidence of a reduced hyperintense signal of the neurohypophysis, which was regarded as compatible with the depletion of the vasopressinergic magnocellular neurons. Direct DNA sequencing and restriction enzyme cleavage analysis revealed that a heterozygous c.55G>A transition, predicting a p.Ala19Thr replacement in the C-terminal region of SP, was the cause of adFNDI in the investigated kindred. Conclusions: The identification of the genetic cause of aFNDI in this Calabrian kindred provides further information and confirms the wide variability of disease onset and severity of manifestations related to SP variants of the AVP gene, supporting the need for genetic testing in all patients with familial occurrence of polyuria, regardless of their clinical and radiological phenotype. Even though sexual differences in the antidiuretic responses are documented, it is unclear whether female gender would attenuate clinical disease progression in the presence of a pathogenic c.55G>A mutation. View Full-Text
Keywords: AVP; signal peptide; adFNDI; rare endocrine diseases; gender medicine AVP; signal peptide; adFNDI; rare endocrine diseases; gender medicine
►▼ Show Figures 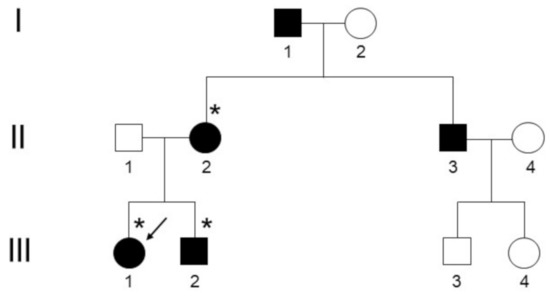