A low dose of dienogest (DNG) 1 mg/day is useful for treating dysmenorrhea in young women. However, the effect of DNG on bone turnover during bone growth and formation, rather than at maturity, is currently unknown even at low doses. We investigated change in bone turnover after 3 months of DNG 1 mg/day. This retrospective cohort study included young women aged 10–24 years with dysmenorrhea and irregular menstruation. Gonadotropins and the bone metabolism markers TRACP-5b and BAP were compared before and at 3 months after administration of DNG 1 mg/day. There were no significant changes in TRACP-5b (before, 455.6 ± 323.6 mU/dL; 3 months after, 462.1 ± 346.1 mU/dL), BAP (before, 24.7 ± 19.0 μg/L; 3 months after, 25.2 ± 22.3 μg/L), or the TRACP-5b/BAP ratio (before, 22.1 ± 7.0; 3 months after, 21.5 ± 6.3). Administration of DNG 1 mg/day had no significant effect on bone turnover after 3 months during the bone-growth phase in young women.
Keywords: dienogest; dysmenorrhea; adolescent; bone metabolism markers dienogest; dysmenorrhea; adolescent; bone metabolism markers

Dysmenorrhea occurs in approximately 12% of adolescent women and has been reported to affect their absenteeism [1]. Primary dysmenorrhea develops from a young age, and secondary dysmenorrhea is diagnosed if there is no improvement with initial treatments such as non-steroidal anti-inflammatory drugs (NSAIDs). Adolescent dysmenorrhea is associated with nausea, vomiting, diarrhea, headaches, muscle cramps, and premenstrual syndrome (PMS) [2]. Endometriosis is a major cause of secondary dysmenorrhea in adolescence [3]. Endometriosis is a complex gynecologic issue described by benign proliferation of ectopic endometrial tissues, with dysmenorrhea, pelvic pain, and infertility and different manifestations principally among women of reproductive age [4]. Endometriosis is accounted for to influence almost 176 million women of reproductive age around the world. Endometriosis is associated with chronic pelvic pain [5]. Chronic pain impacts a young women’s quality of life, resulting in depression, anxiety, and fatigue [6,7]. The prevalence of endometriosis increases to as high as 25–50% in women with infertility and 30–50% of women with endometriosis have infertility [8]. IVF studies have suggested that women with endometriosis have poor ovarian reserve, low oocyte and embryo quality, and poor implantation [9]. Unlike the appearance in adult women, endometriosis in adolescents appears in most cases as clear, red lesions on the surface of the peritoneum [10]. Therefore, a precise diagnosis is difficult by transvaginal ultrasonography, and must be obtained by laparoscopic surgery. Hormone therapy can be considered when secondary dysmenorrhea is suspected in adolescent women and medical treatments such as NSAIDs have been ineffective.
Compared with the conventional dose of 2.0 mg/day of dienogest (DNG), the dose of DNG 1.0 mg/day approved for use in Japan in 2020 results in a smaller decrease in serum estrogen levels [11]. The oral contraceptive pill (OCP) is recognized as the first-line treatment for dysmenorrhea in adolescent women, and progestin may also be a good option when dysmenorrhea is associated with endometriosis or severe PMS [12]. A previous study has reported that DNG 2 mg/day had no effect on follicle-stimulating hormone (FSH) or luteinizing hormone (LH) secretion, and that 17β-estradiol showed a slight decrease (68 pg/mL) after 6 months [13,14]. However, no study has investigated the effect on gonadotropin levels of an even lower dose of DNG of 1 mg/day.
According to a previous study, DNG 2 mg/day did not significantly reduce bone mineral density (BMD) in adult women [14]. However, the effects of DNG on bone growth remain unknown, and there is concern regarding the effect of estrogen secretion inhibitory effect on bone turnover during bone growth when DNG 1 mg/day is used to treat adolescent dysmenorrhea. Adolescent bone metabolism occurs in two distinct periods: a period of bone elongation until bone elongation stops, followed by a period of bone mass increase until peak bone mass is reached [15]. Regarding bone metabolism in adolescence, the effects of carboxy-terminal collagen crosslinks (CTX) and procollagen type I N-terminal propeptide have been reported in other countries. In Japan, adolescent data are available for tartrate-resistant acid phosphatase-5b (TRACP-5b) and bone specific alkaline phosphatase (BAP), but are still insufficient to evaluate their effects on bone metabolism. TRACP-5b is an excellent bone resorption marker that has almost no diurnal variation and is unaffected by renal function [16,17]. The bone formation marker BAP is also unaffected by renal function, and although it changes slowly compared with CTX, it is an accurate indicator of the final product of bone formation [18]. Because bone metabolism markers have large individual differences and errors, in the present study we evaluated bone turnover rate as the TRACP-5b/BAP ratio. The duration of the remodeling cycle is reported as approximately 3 months in normal bone [19]; accordingly, we examined change in bone turnover using measurements obtained before and at 3 months after administration of DNG 1 mg/day.

We conducted a retrospective cohort study of adolescent and young women with dysmenorrhea and irregular menstruation who were treated at Kurashiki Heisei Hospital between May 2020 and November 2020.
The study inclusion criteria were as follows: adolescent or young women aged 10–24 years with primary or secondary dysmenorrhea diagnosed by ultrasonography and magnetic resonance imaging (MRI). The imaging examinations and blood tests were ruled out other painful causes of pain such as inflammatory bowel disease and irritable bowel syndrome. From this group we extracted those in whom symptoms did not improve after more than 6 months of non-hormone therapy such as NSAIDs, and who had not previously been administered hormone therapy.
The study protocol was approved by Ethics Committee/Institutional Review Board of Kurashiki Heisei Hospital (H30–23), and the study was conducted according to tenets of the Declaration of Helsinki. Written informed consent was provided by all subjects prior to inclusion in the study.

Statistical analyses were performed with the SPSS software program for Windows, ver. 24.0 (SPSS Inc., Chicago, IL, USA). The Wilcoxon rank-sum test was employed as appropriate. Differences were considered to be significant for p values < 0.05.

It was recognized in 2010 that endometriotic pain could be treated as effectively by administration of DNG 2 mg/day as by gonadotropin releasing hormone agonists [14]. DNG at a dosage of 2 mg/day moderately suppresses serum estradiol levels. It is also associated with a high incidence of abnormal menstrual bleeding patterns, although this adverse effect has generally been well tolerated by patients, with few discontinuing medical treatment, and both the intensity and frequency of bleeding showed a decrease over time [14]. Furthermore, it is known that a dosage of DNG 2 mg/day does not reduce bone mass in mature bone [14]. It is noteworthy that the present study found a significant difference in the bone formation process between puberty to maturity compared with that in adults.
In the present study, we sought for the first time to investigate the effect of administration of DNG 1 mg/day on bone elongation and formation. The cycle of bone turnover is considered to be approximately three months, and an effect on bone metabolism by administration of DNG 1 mg/day for three months can be inferred. The present results suggested that DNG 1 mg/day has little effect on bone elongation, bone formation, or change in gonadotropin ratios that occur from puberty onwards. Bone metabolism in young women involves numerous factors that include somatomedin, IGF, vitamin D, and phosphorus metabolism [20]. In addition, any adverse influence on peak bone mass (PBM) near the end of the bone formation phase is closely related to increased risk of developing osteoporosis in the future. There is broad consensus that 90% of PBM in women is determined by age 18, although longitudinal studies over extended periods have suggested that the bone maturation process may take much longer [21]. OCP is the first choice for treating adolescent dysmenorrhea. During the COVID-19 pandemic, there has been concern that the risk of thrombosis caused by hypercoagulation due to COVID-19 infection will increase, which suggests that low-dose DNG is safe for women [22,23,24,25].
The latest Cochrane Collaborative Review also found that OCP had no adverse effects on mature bone health [26]. In contrast, the following adverse effects of OCP on the bones of young women have been documented. Hartard et al. reported low PBM in women who started OCP use within three years of their first menstrual period [27]. A meta-analysis reported that OCP was associated with a significant reduction in most, if not all, the markers of bone turnover [28]. The potential effects of these metabolic changes on bone health are currently controversial. Although there are few data regarding the effect of DNG on bone metabolism, we found no decrease in bone metabolism markers, even to the level reported with OCP administration, in young women after three months of treatment with DNG 1 mg/day. It is known that administration of progestins such as drospirenone and norethindrone acetate alone have no effect on bone growth [29]. Taken overall, treatment with progestin alone may the best choice of medication for the treatment of dysmenorrhea in young women in the future, in terms of safety considerations such as COVID-19 infection and bone metabolism.
In this study, we found no effect on bone turnover during bone elongation and formation between before and after treatment with DNG 1 mg/day. It may have been possible to investigate the effect of DNG more accurately by examining the bone turnover rate rather than comparing the values of bone metabolism markers. However, the effect on bone growth in young women cannot be sufficiently evaluated using only bone metabolism markers, and evaluation such as BMD measurement would be required. In addition, as this retrospective cohort study assessed the bone turnover rate using bone metabolism markers in a period of only 12 weeks, more comprehensive studies on the longer-term effects are required in the future.

The study protocol was reviewed and approved by the Ethics Committee/Institutional Review Board of Kurashiki Heisei Hospital (H30–23), and the study was conducted according to the tenets of the Declaration of Helsinki.

Written informed consent was provided by all subjects prior to study inclusion. 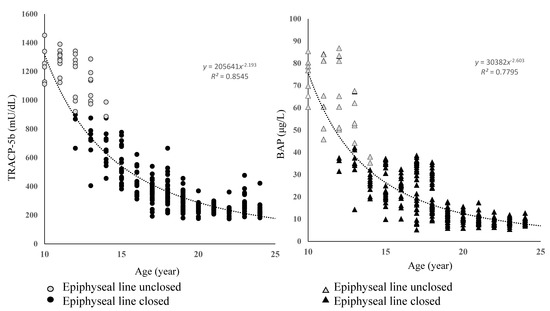 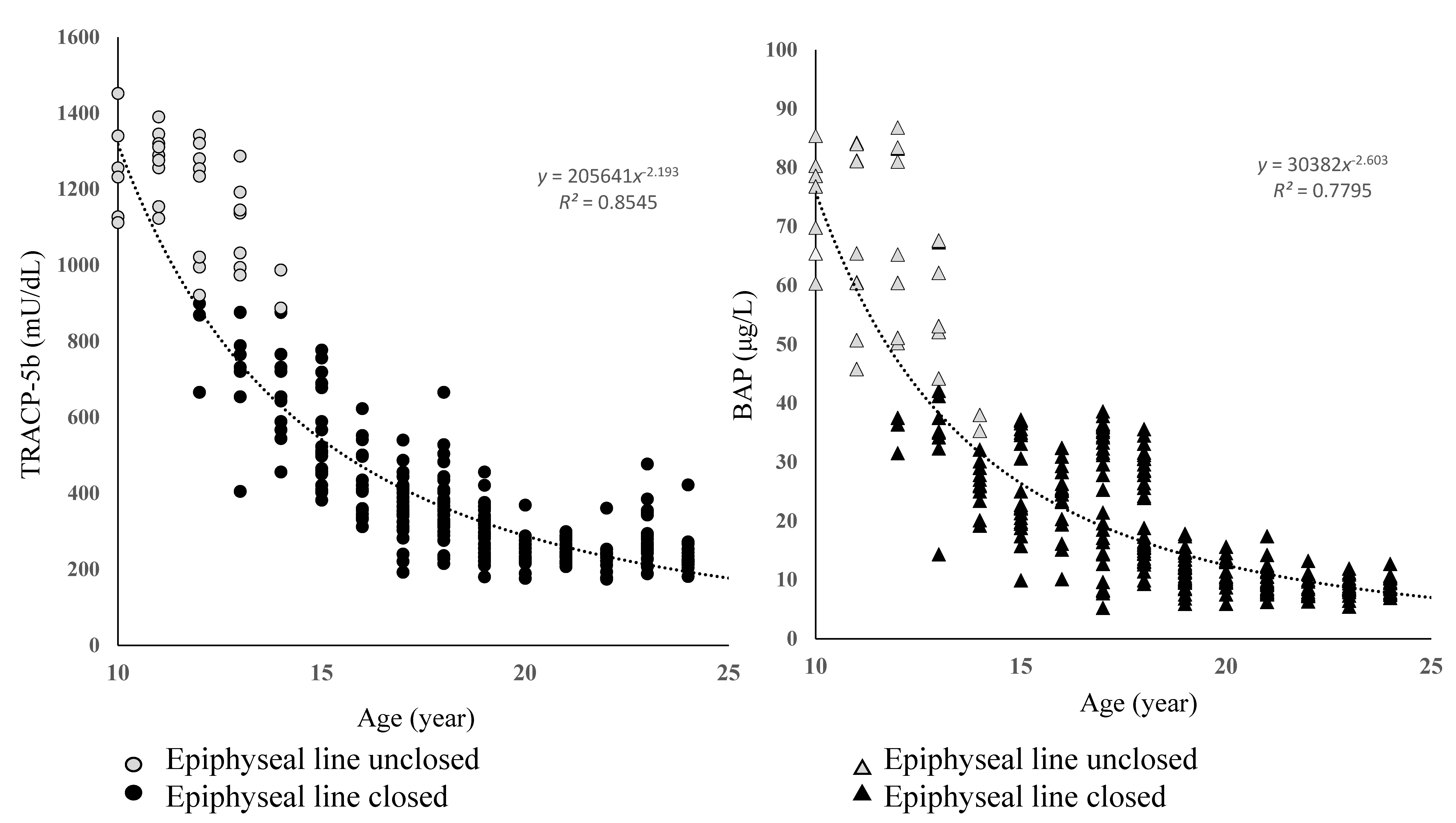 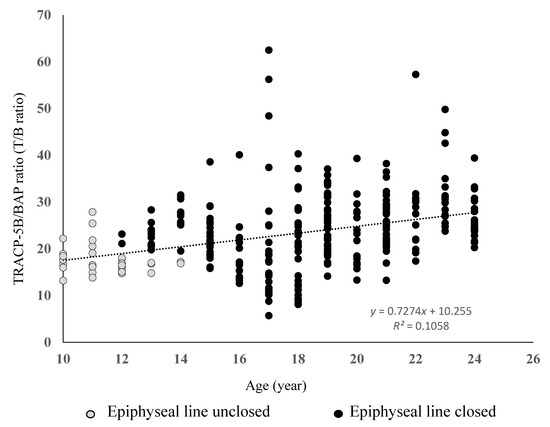 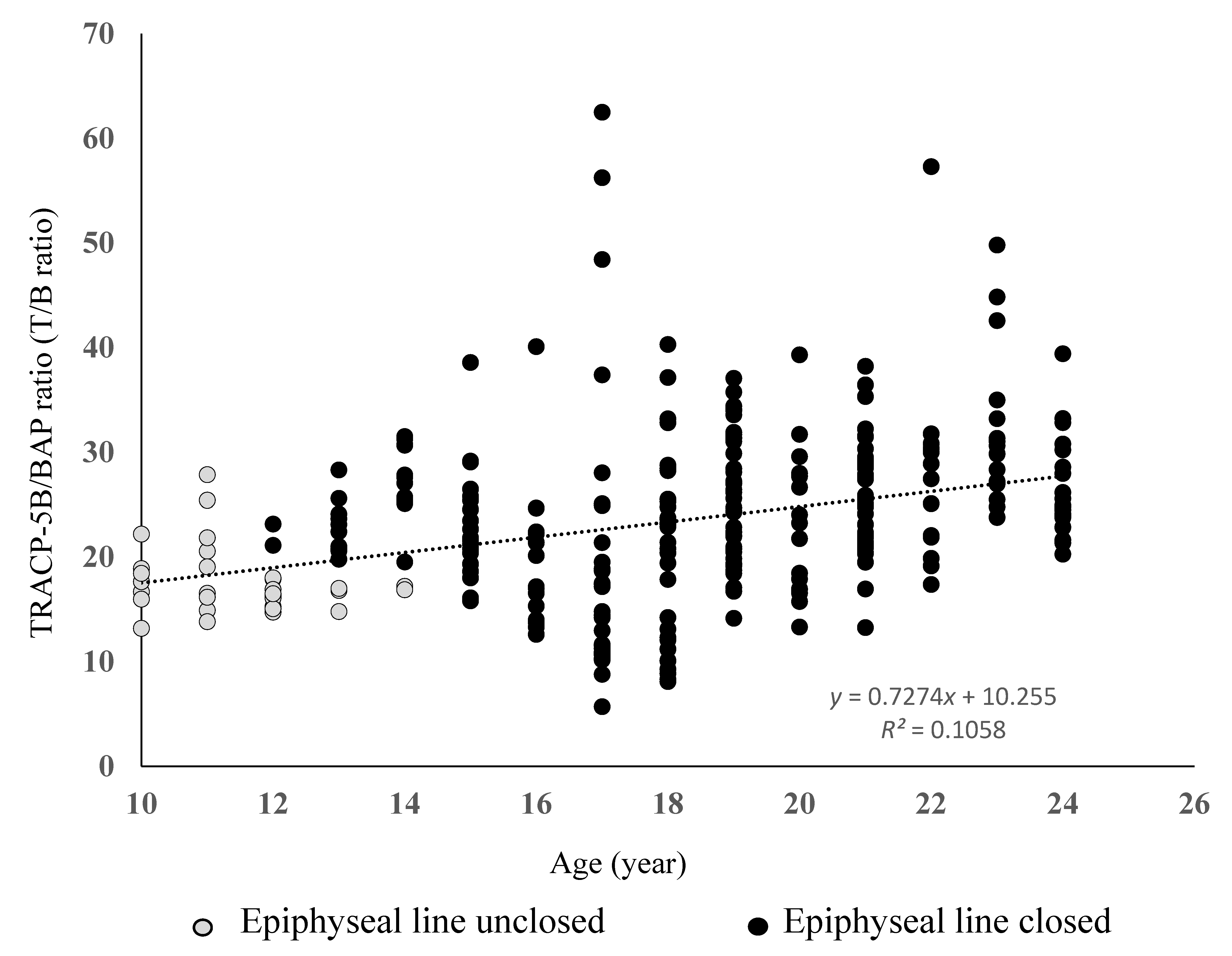