Z,E-Isomerism in a Series of Substituted Iminophosphonates: Quantum Chemical Research

Esters of iminophosphonic acids (iminophosphonates, or IPs), including a fragment, >P(=O)-C=N, can be easily functionalized, for instance to aminophosphonic acids with a wide range of biological activity. Depending on the character of the substitution, the Z- or E-configuration is favorable for IPs, which in turn can influence the stereochemistry of the products of chemical transformations of IPs. While the Z,E-isomerism in IPs has been thoroughly studied by NMR spectroscopy, the factors stabilizing a definite isomer are still not clear. In the current work, density functional theory (DFT, using M06-2X functional) and ab initio spin-component–scaled second-order Møller–Plesset perturbation theory (SCS-MP2) calculations were carried out for a broad series of IPs. The calculations reproduce well a subtle balance between the preferred Z-configuration inherent for C-trifluoromethyl substituted IPs and the E-form, which is more stable for C-alkyl- or aryl-substituted IPs. The predicted trend of changing activation energy values agrees well with the recently determined experimental ΔG≠298 magnitudes. Depending on the substitution in the aromatic moiety, the Z/E-isomerization of N-aryl-substituted IPs proceeds via two types of close-in energy transition states. Not a single main factor but a combination of various contributions should be considered in order to explain the Z/E-isomerization equilibrium for different IPs. View Full-Text
Keywords: DFT calculations; SCS-MP2 calculations; Z,E-isomerism; iminophosphonates; thermodynamic stability DFT calculations; SCS-MP2 calculations; Z,E-isomerism; iminophosphonates; thermodynamic stability
►▼ Show Figures 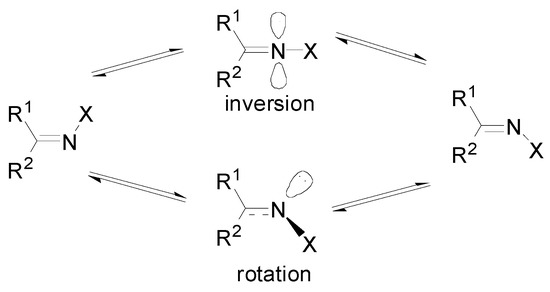