Evaluation of the Biocompatibility and Osteoconduction of the Carbon Nanotube, Chitosan and Hydroxyapatite Nanocomposite with or without Mesenchymal Stem Cells as a Scaffold for Bone Regeneration in Rats
Next Article in Special Issue

The Products of Bone Resorption and Their Roles in Metabolism: Lessons from the Study of Burns

Angiomatoid fibrous histiocytoma is a rare neoplasm with an intermediate malignant potential, that mostly occurs in the subcutis and features varying proportions of epithelioid, ovoid and spindle cells in a nodular and syncytial growth pattern, with hemorrhagic pseudovascular spaces. Here, we report the clinical case of a 68-year-old man who presented with AFH on the right arm; the disease relapsed a few years after surgical excision. We also conduct a brief review of the literature, focusing on the biological and genetic characteristics and the differential diagnosis from other more or less similar entities.
Keywords: histiocytoma; angiomatoid; fibrous; review histiocytoma; angiomatoid; fibrous; review

A 68-year-old man presented to the Orthopedics and Traumatology U.O.C. for swelling of the right arm. Many years earlier, the patient had undergone left nephrectomy for a renal cell carcinoma, and thyroidectomy for papillary thyroid carcinoma. The patient had since been in good health and was taking no therapy. Physical examination confirmed the presence of a lesion on f the upper third of the right arm, at the level of the brachial triceps. The lesion was of a soft consistency, did not appear to be mobile over the deep planes and showed no connection with the overlying skin. The patient gave written informed consent to a scientific report of his case, including diagnostic images.
Both total body CT and regional Magnetic Resonance highlighted the presence of an oval formation in the lateral belly of the brachial triceps, measuring 36 × 27 mm, with a mixed content including blood. The formation was encapsulated, with slight antero-external irregularities (Figure 1). At pre-operative angiography, intense peripheral vascularization was confirmed, but with a centripetal trend, correlated with the upper and lower polar arterial afferents from the anterior circumflex artery of the humerus. The overall body PET, reconstructed in the 3 orthogonal planes, showed areas of pathological radiopharmaceutical accumulation in the belly of the left brachial triceps muscle (SUV max 8.0).

The patient underwent two biopsies that were not conclusive for diagnosis. Fine needle aspiration cytology was also performed, yielding mixed matter including blood with numerous pigmented macrophages. Finally, after multidisciplinary consultation, the orthopedic surgeons opted for complete removal of the lesion, that was sent to the Pathologic Anatomy laboratory for histological examination. The final diagnosis was an angiomatoid fibrous histiocytoma. Close follow-up was advised owing to the risk of local recurrence. One year later, a new surgical biopsy was positive for relapse due to incomplete excision during the previous surgery.
On macroscopic observation, a brownish neoformation measuring 3 × 2 × 0.7 cm, with an increased consistency and irregular margins, was observed. Microscopically, the lesion consisted of histiocyte-like cells, quite uniform, with a round or oval nucleus and lying in solid sheets (Figure 2A,B). It was surrounded by an inflammatory lymphoid infiltrate (lymphocytes and plasma cells) and impinged on the surrounding pseudo capsule. There were hemorrhagic foci and abundant hemosiderin deposits, testifying to previous bleeding. Small vessels were present at the periphery of the nodules but did not seem to be the major components of the tumor. (Figure 2B).
Immunohistochemistry showed positivity for mesenchymal markers, especially Desmin (Figure 2C) e.g., for CD68 (PG-M1) and CD163, indicating the histiocytic nature of the lesion (Figure 2D). Immunoreactions for EMA (Epithelial Antigen of Membrane), S-100 protein, CD34/CD31, ERG and Podoplanin were negative. The neoplastic proliferation fraction, assessed by KI-67, was <10% of neoplastic cells.

Angiomatoid Fibrous Histiocytoma is a rare tumor that was first described by Enzinger in 1979 [1]. It was originally believed to be quite an aggressive neoplasm with uncertain histogenesis, mainly affecting children and young adults, and often involving superficial soft tissues of the extremities [2], although rare cases have been reported in other locations, such as intracranial [3,4,5], spinal [6] or chest wall [7]. In terms of prevalence, AFH accounts for 0.3% of all soft tissue cancers [2] and is classified by the World Health Organization (WHO 2020) as a mesenchymal neoplasm of uncertain differentiation and intermediate malignant biological behavior. Indeed, AFH has a local recurrence rate of 15–20% and a distant metastasis rate of 1–3% [2,3]. In the Literature [4,5] a higher incidence rate is reported in children and young adults, but our patient was older, and the neoformation had appeared only a few months earlier. No substantial clinical signs and symptoms were present, except for a local mass compression effect. Before proceeding to the “complete” removal of the lesion, cytological examinations of material from the lesion were not conclusive but showed pigmented macrophages (the pigment deriving from heme catabolism). The correct diagnosis was made at histology of the surgical specimen, since despite its characteristic morphology, the coexistence of different aspects in the same lesion and some radiological characteristics similar to other lesions often prevent a definitive diagnosis only with radiology. Immunohistochemical investigations are not generally diagnostic but prove useful in supporting the diagnostic suspicion based on the morphology of the lesion. Generally, markers such as smooth muscle actin (SMA), desmin, epithelial membrane antigen (EMA), CD68 and CD99, are positive. In particular, the co-expression of EMA, SMA and desmin is very helpful for diagnosis [5]. In our case, the neoplastic cells showed positivity for actin and desmin of smooth muscle and were negative for protein S100, for epithelial markers (cytokeratin AE1/AE3 and MNF116), for vascular markers (ERG and CD31) and for cellular markers of dendritic-follicular cells (CD21 and CD35). A summary of the immunohistochemical markers that can be used for a correct differential diagnosis is given in Table 1. Recently, Xiang et al. reported two of only three cases of AFH, showing positivity for TLE-1, a nuclear marker used for some tumors belonging to the Synovial Sarcoma family [7]. In 2020, Abrahao-Machado et al. described 18 cases of AFH, 4 of which expressed MUC-4 (22.2%). Even though not considered specific, they extended the spectrum of MUC4-positive mesenchymal neoplasms also to a subset of AFH [8]. Instead, Cheah et al. reported the possibility of immunohistochemical positivity for ALK, pointing out the greater risk of misdiagnosis as an inflammatory myofibroblastic tumor (IMT) [9]. There are no specific cytological criteria that can ensure a certain diagnosis. A recent work by Rani et al. [10] confirmed the non-specificity of the cytological characteristics, that were mostly, as in our case, pigmented macrophages (hemosiderin-leaden). In selected cases it is possible to determine the genetic rearrangement, the most frequent of which is translocation t (2; 22) (q33; q12), resulting in an EWSR1-CREB1 fusion (>90% of cases) while, less commonly, t (12; 22) (q12; q12) is detected, resulting in an EWSR1-ATF1 fusion [11,12].
Differential diagnosis of AFH covers a wide field, spanning from reactive lesions such as granulomas to both benign and malignant neoplasms [13]. It is important to remember that the only consistent finding in AFH is ovoid to fused cell sheets, while other features such as the fibrous capsule or lymphoplasmacytic infiltrate may be absent or not sampled [14]. Granulomatous inflammation can present with similar morphological characteristics, but does not show vascular spaces, in contrast with AFH [15]. Aneurysmal benign fibrous histiocytoma is another candidate in differential diagnosis, but this entity is mostly more heterogeneous than AFH, occurs superficially in young adults but is predominantly dermal and Desmin-negative [14,16]. Other differential diagnosis candidates are spindle-cell hemangioma and/or Kaposi sarcoma [14], that is positive for CD34 and human herpes virus 8 (HHV8), in contrast with AFH.
A last, but no less important aspect concerns the possibility of onset of this lesion in a subject who had previously undergone chemotherapy for previous renal cell carcinoma. In literature it has rarely been reported, as in the case of Han-Sang Lee et al. [17] reporting a case of AFH in a patient previously treated with chemotherapy for previous testicular cancer. The association between a previous therapy and the onset of a neoplasm at a rare age can be explained according to this model.

Angiomatoid fibrous histiocytoma is a rare neoplasm of intermediate biologic potential, most frequently observed on the superficial extremities of children and young adults. The vast majority of these neoplasms has an excellent prognosis, but the correct diagnosis is important because of the risk of local recurrence and slight risk of metastasis and death. It is increasingly being identified at several unusual anatomic sites and showing a growing spectrum of morphologic patterns. Coupled with its bland morphology, this can pose significant diagnostic difficulties. In selected cases it is important to conduct molecular investigations or FISH to make a confident diagnosis of AFH and further reduce the risk of diagnostic error. 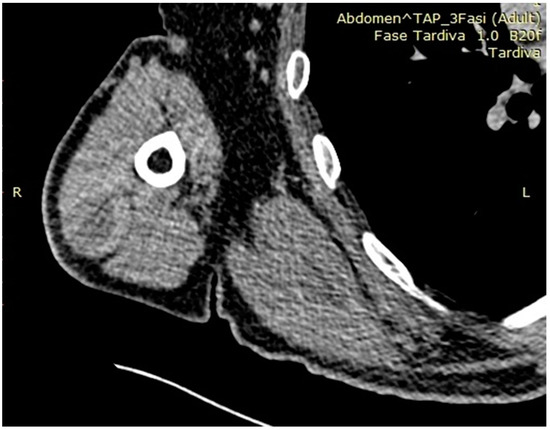 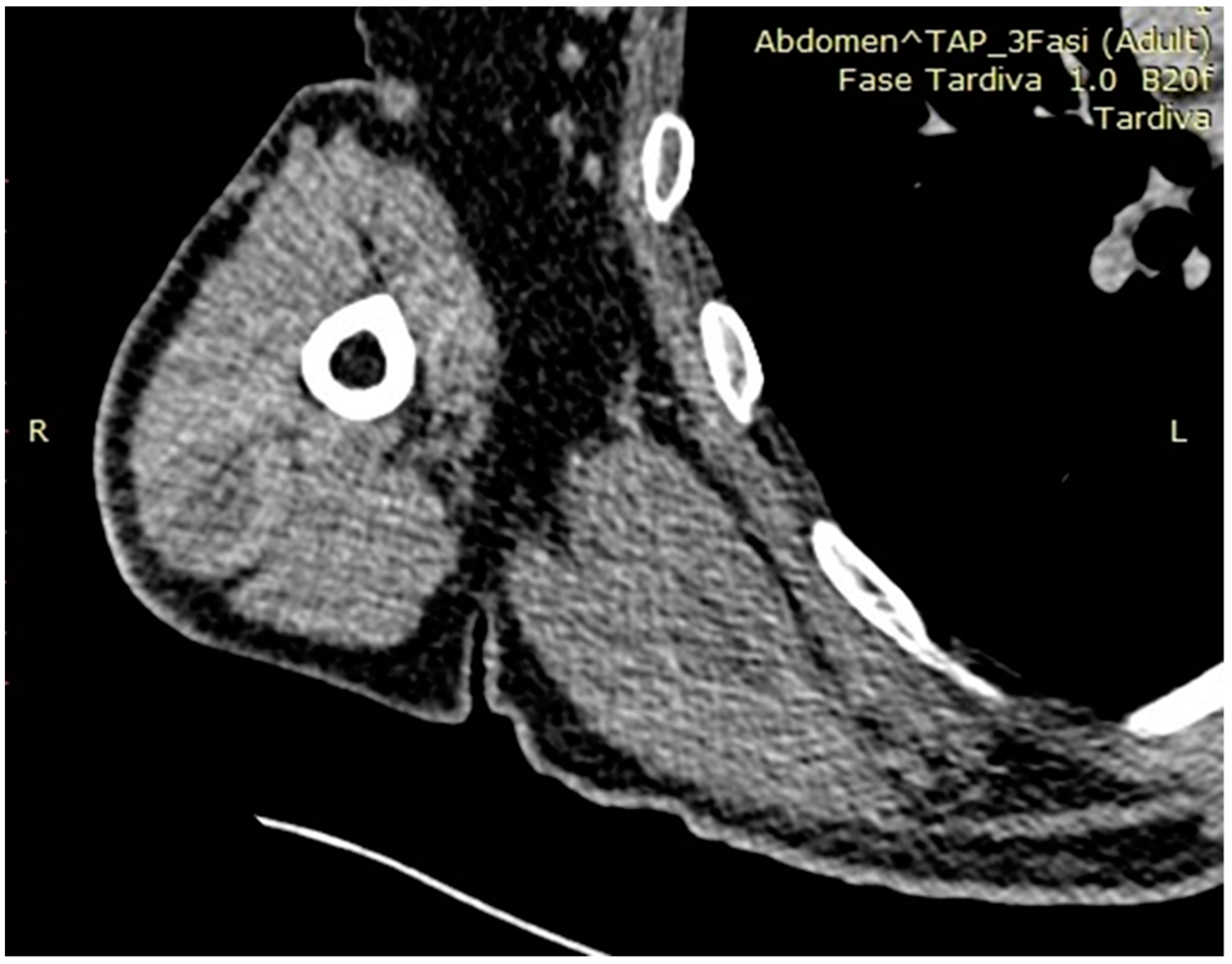 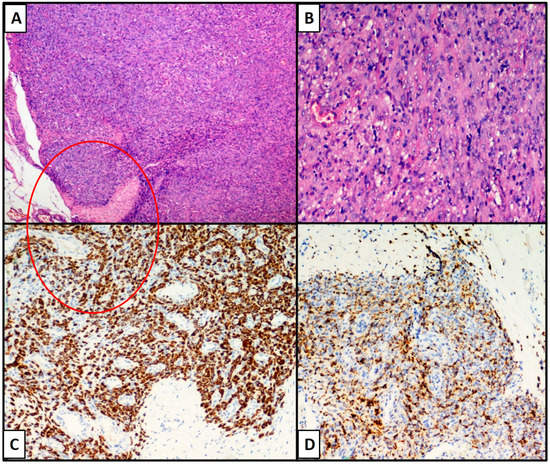 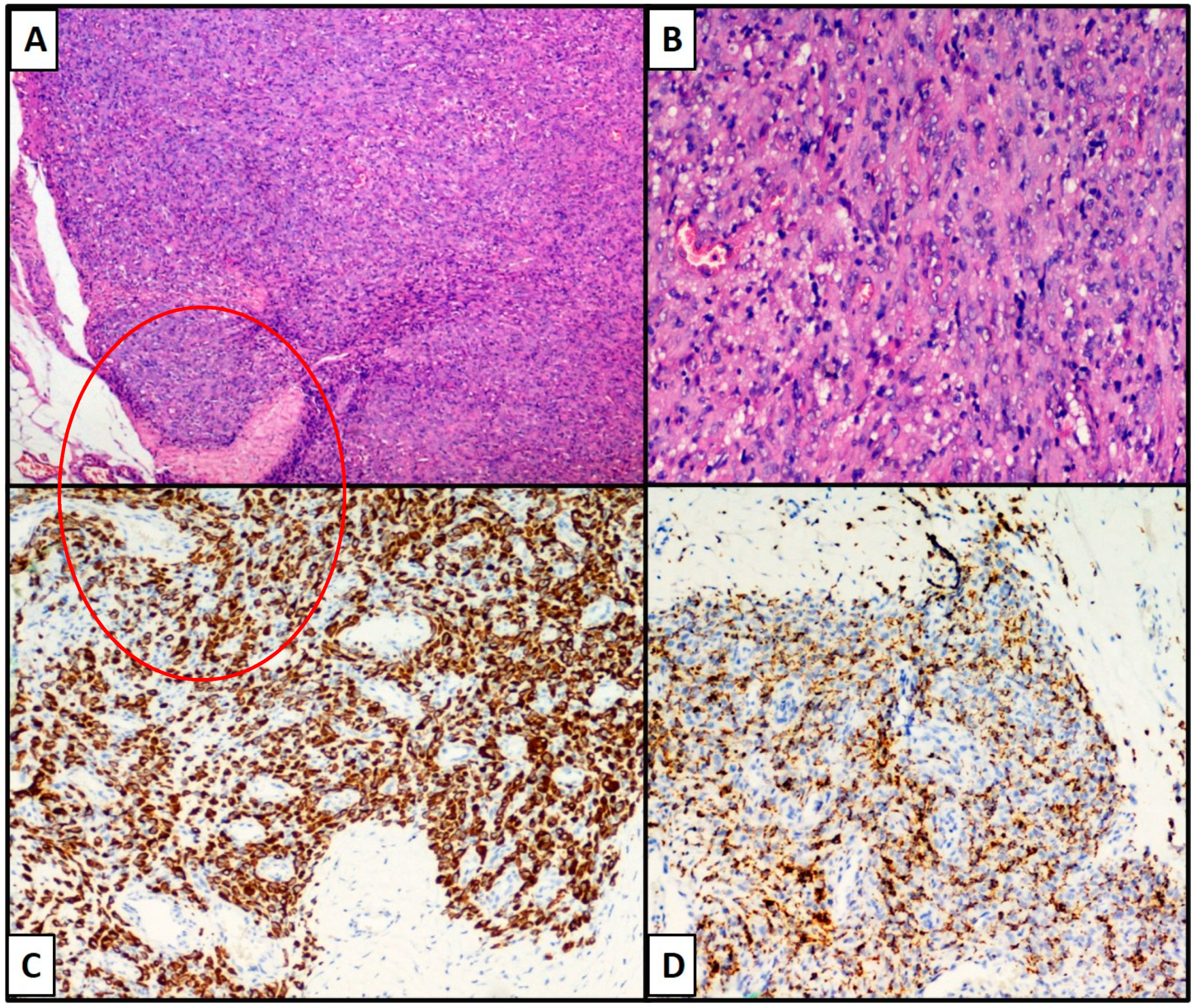