Facial skin, especially in the lower eyelid, is a common site of basal cell carcinoma due to sunlight exposure. After a lower eyelid lesion has been completely removed using histopathological confirmation, the resulting orbital tissue defects may be closed with either local advancement flaps, such as a horizontal V-Y advancement lower eyelid flap, or free grafts depending on their extent [1,2]. In the case of extensive defects that affect the full thickness of the lower eyelid, a common treatment method is the Hughes transconjunctival eyelid-sharing flap. This technique was first described in 1937 by Wendell Hughes [3]. Over the years, this technique has undergone numerous modifications to reduce the number of eyelid complications [4]. This type of surgery is recommended for large defects in the central part of the lower eyelid when the fragments in the peripheral medial and lateral parts that are used to attach the transconjunctival eyelid-sharing flap have been preserved [5]. When lateral canthal tissue is also resected, the orbital periosteal flap is often used to reconstruct the lateral canthal ligament. However, the construction of a proper periosteal flap when the lateral canthal area has been affected by previous surgeries can be challenging. In such cases, reconstruction of the lateral canthal ligament with other materials should be considered. The fascia lata, which is known for its use in ptosis management, is one of these materials. To the best of our knowledge, this case presentation is one of very few reports to describe the use of a fascia lata free graft to reconstruct the lateral canthal ligament combined with the Hughes transconjunctival eyelid-sharing flap in a patient with a significant defect in the lower eyelid that includes the lateral canthus.
This manuscript was written in compliance with the rules and regulations of the Declaration of Helsinki.

A 75-year-old patient was referred to our hospital for the removal of a lower eyelid tumor on the right side. According to the patient, the lesion appeared two years ago and had been slowly growing. After several months, the lesion started to cause discomfort due to eyelid deformation and excessive tear production.
The patient had undergone three surgeries over the last 15 years to remove facial skin lesions (eyebrow, forehead, and temple). The postsurgical histopathological diagnosis for all three surgeries was basal cell carcinoma. Ten years ago, the patient underwent surgery to correct a right lower eyelid ectropion; the surgical technique used was the lateral tarsal strip method. Six months after this surgery, the patient suffered an injury to the right orbital area that was followed by ectropion recurrence. Another lateral tarsal strip procedure was performed, but it was combined with a periosteal flap. As a result, the eyelid was positioned correctly and the patient was satisfied with the cosmetic result.
On admission to our hospital, the patient’s lower eyelid showed an irregularly shaped lesion that covered the entire free edge of the eyelid from the lateral side towards the medial direction and ended approximately 3 mm before the lacrimal punctum. A scar was visible on the right eyebrow from the prior removal of basal cell carcinoma. We determined that the patient was eligible for tumor removal by the Mohs method and for reconstruction of the lower eyelid using the Hughes transconjunctival eyelid-sharing flap. Since the peripheral lateral part of the lower eyelid was also affected by the pathological process, a simultaneous reconstruction of the lateral canthal ligament using fascia lata was scheduled.
Under local anesthetic, the tumor was removed from the right lower eyelid using the Mohs method. We were able to save approximately 1 mm of healthy tissue from the lacrimal punctum on the medial side. However, the whole lateral side of the eyelid was removed up to the lateral canthus. The tissue loss from the procedure amounted to 80% of the horizontal eyelid length (canthus to canthus). Histopathological examination showed basal cell carcinoma.
The following day, the lower eyelid was reconstructed. Under local anesthetic, a 3.5 cm longitudinal incision was made in the patient’s thigh, and a 2.5 cm × 1 cm fragment of fascia lata was obtained from the iliotibial band. The Hughes transconjunctival eyelid-sharing flap was then mobilized from the right upper eyelid, and 4 mm of the lower tarsal plate was preserved. The flap was stitched to the edges of the lower eyelid wound from the medial and inferior side using 5.0 absorbable sutures (Vicryl). A fascia lata strip that measured 2 cm × 0.6 cm was sutured to the tarsus of the transconjunctival eyelid-sharing flap with a 6.0 absorbable suture (Vicryl). The opposite end of the fascia lata fragment was then fixed to the scarred periosteum in the lateral canthus with a 5.0 absorbable suture (Vicryl). As a result, lower eyelid tension in the upper-lateral direction was achieved. The anterior lamella of the lower eyelid was reconstructed with a free skin graft from the ipsilateral upper eyelid. The wound in the lateral canthus was closed with a local lateral advancement flap, which achieved additional tension in the horizontal line of the lower eyelid. A pressure dressing was applied for 24 h.
After four weeks, the palpebral fissure was cut open. A lacrimal patency test (irrigation) was performed. The lower lacrimal canaliculus was patent. The patient remained under observation for one year after the procedure (Figure 1).

Although some authors do not recommend the use of Hughes transconjunctival eyelid-sharing flaps [6], this method is an accepted treatment for large lower eyelid defects [3,5,7]. This procedure is usually recommended when the peripheral fragments of the lower eyelid are preserved [5]. In the case of a defect that affects the lateral canthus, reconstruction of the lateral ligament using a periosteal flap produces good results [8,9]. The lower eyelid is then suspended on a periosteal strip that is obtained from the outer part of the orbit. The free end of the strip is stitched to the tarsal plate and the other end constitutes a continuation of the rest of the orbital periosteum. In the reconstruction of canthal ligaments, screws or bone anchors are also used for better fixation. This is particularly relevant for the medial canthus because access to the periosteum is obstructed [10].
The orbital tissue defect in our patient covered 80% of the lateral part of the right lower eyelid and included the lateral canthus. Our experience using the Hughes transconjunctival eyelid-sharing flap has been positive, and we have not observed any of the complications reported by other authors [4]. Therefore, we chose this method to reconstruct the body of the lower eyelid in this patient. Due to the patient’s previous two surgeries in the lateral canthal area and resultant scarring, we decided to use a free graft of fascia lata instead of using a periosteal flap to reconstruct the lower lateral canthal ligament. The use of fascia in ophthalmic surgery is most common in ptosis management. Fascia slings are also used to correct the lower eyelid position [11,12]. In the past, few authors have described the use of fascia lata in reconstruction of the lateral canthal ligament [13,14,15]. Sendul et al. presented this approach in the treatment of lagophthalmos due to facial paralysis. They repositioned the lower eyelid with an autologous fascia lata graft attaching it to the orbital rim [15]. Matsumoto et al. used fascia lata to support a cheek flap in lower eyelid reconstruction [14]. However, none of the authors combined it with the Hughes transconjunctival eyelid-sharing flap.
Autologous fascia is a perfect surgical material due to its structure and physical properties. It consists of fibroblasts and white collagen fibers that interweave and form a network filled with tissue fluid, elastic fibers and connective tissue cells [11]. This material has a significant tensile strength of up to 7000 pounds per square inch and a specific gravity of 1.31. These data indicate that fascia lata has a strength per unit weight that is comparable to that of steel [11]. Moreover, autologous fascia is minimally absorbed over time after the graft [16]. The use of this material made it possible to properly fix the lower eyelid of our patient and permanently prevent its future retraction. This result was reinforced by use of the lateral advancement flap. This flap produced additional tension along the horizontal direction, which was consistent with the relaxed skin tension lines of the lower eyelid [2], and further increased the stability of the correct eyelid position.
Despite the described advantages of autologous fascia lata graft, it has to be mentioned that the donor site (the upper outer thigh) is far from the ophthalmologist’s area of expertise. Harvesting this material also requires separate prepping, draping and giving local anesthesia, which consume additional time. The potential complications, although rare, may involve wound infection, leg pain and poor scar formation, as well as a muscle hernia. Because of these reasons some ophthalmic surgeons use alternative graft materials such as autologous fascia temporalis or preserved homologous fascia [11,12].
In the presented approach we achieved excellent and durable functional and cosmetic results in our patient by combining the Hughes transconjunctival eyelid-sharing flap with reconstruction of the lower lateral canthal ligament using fascia lata, and increasing the stability of these two by a lateral advancement flap. The free graft of fascia lata effectively replaced a periosteal flap, which would have been difficult to use in this patient. 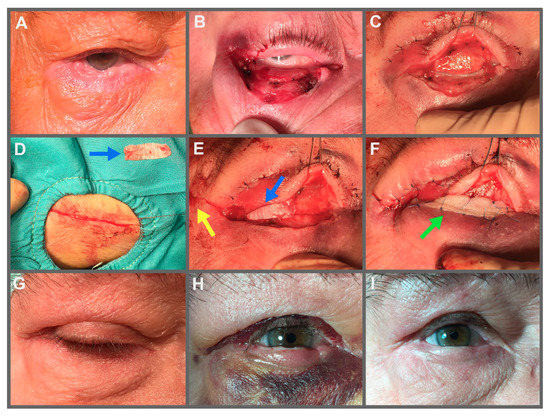 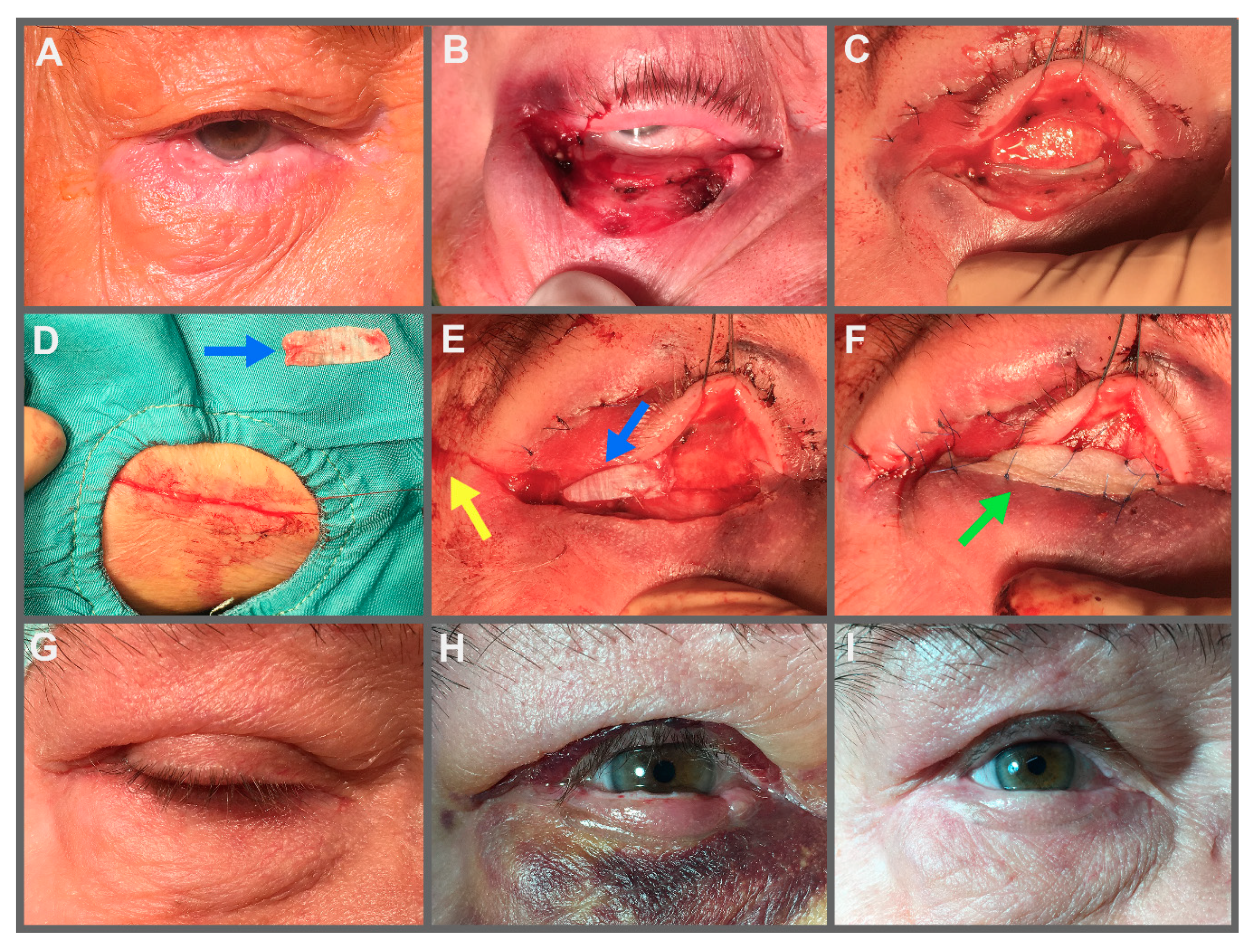 © 2020 by the author. Licensee MDPI, Basel, Switzerland. This article is an open access article distributed under the terms and conditions of the Creative Commons Attribution (CC BY) license (http://creativecommons.org/licenses/by/4.0/).
We use cookies on our website to ensure you get the best experience. Read more about our cookies here.
Accept
We have just recently launched a new version of our website. Help us to further improve by taking part in this short 5 minute survey here. here.
Never show this again