A recent report in the journal, Neurology, documents age-normalized, nation-specific (e.g., United States and Western Europe), progressive decrease of dementia, beginning about 25 years ago. This observation has, thus far, not had explanation. We begin our proposed explanation with the following previous disease construct. (1) Some dementia is caused by innate immune over-response to infections. (2) The innate immune over-response occurs via excessive conversion of amyloid protein to α-sheet conformation. (3) This conversion evolved to inhibit invading microbes by binding microbe-associated α-sheet, e.g., in hyper-expanded capsid intermediates of some viruses. The rarity of human α-sheet makes this inhibition specific for microbial invaders. As foundation, here we observe directly, for the first time, extreme, sheet-like outer shell thinness in a hyper-expanded capsid of phage T3. Based on phage/herpesvirus homology, we propose the following. The above decrease in dementia is caused by varicella-zoster virus (VZV) vaccination, USFDA-approved about 25 years ago; VZV is a herpesvirus and causes chickenpox and shingles. In China and Japan, a cotemporaneous non-decrease is explained by lower anti-VZV vaccination. Co-assembly extension of α-sheet is relatively independent of amino acid sequence. Thus, we project that additional dementia is suppressible by vaccination against other viruses, including other herpesviruses. View Full-Text
Keywords: alpha-sheet; Alzheimer’s disease; bacteriophage assembly; bacteriophage T3; electron microscopy; herpesviruses; innate immunity; vaccination alpha-sheet; Alzheimer’s disease; bacteriophage assembly; bacteriophage T3; electron microscopy; herpesviruses; innate immunity; vaccination
►▼ Show Figures 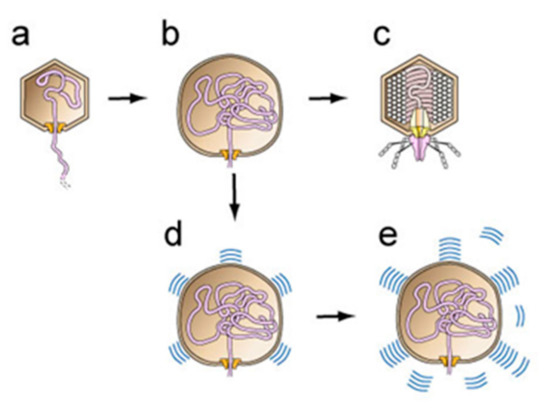