Crosslinking of polyethylene oxide (PEO) using a peroxide in the melt is employed to synthesize soft hydrogels with the ability of controlled release of proteins. The viscoelastic properties of the swollen networks confirm the elastic nature of the synthesized material and they are in agreement with swelling characteristics. The hydrogels have mesh sizes at the nm scale as it is estimated by swelling measurements and measured by small angle neutron scattering (SANS). Diffusion of bovine serum albumin (BSA) and lysozyme (LYZ) out of the hydrogels is restricted by the presence of the network. The diffusion coefficient in the hydrogels is lower for BSA in comparison to LYZ, while in both cases it drops as the mesh size of the network becomes smaller. This study introduces the use of peroxide-crosslinked PEO networks in the investigation of protein transport within hydrogels, the development of hydrogel-based protein delivery patches and polymeric constructs.
Keywords: small angle neutron scattering; diffusion; mesh-size; network; rheology small angle neutron scattering; diffusion; mesh-size; network; rheology

Polyethylene oxide (PEO) hydrogels have been established as biocompatible materials for applications in wound healing, drug delivery, and tissue engineering [1]. While PEO offers structural integrity, hydrophilicity, and ability to combine in copolymers with other functional polymers [2], it is nontoxic and biologically inert [3,4]. The control over architecture and mechanical properties of synthetic PEO hydrogels allows investigations of the role of scaffold elasticity on cell differentiation and proliferation [5] while their biodegradability and tissue adhesion properties may lead to promising wound sealants [6]. PEO can be combined with other polymers to create multifunctional systems as for example using heparin–peptide interactions for the formation of bioactive noncovalent networks [7] and carboxymethyl cellulose to make hydrogel films with potential in tissue engineering [8].
Crosslinking with the use of peroxides offers the possibility for reaction in the melt state by thermal decomposition, production of free radicals, and subsequent hydrogen abstraction from the polymer [9]. It has been successfully used to improve the processing and mechanical properties in bioplastics [10] and traditional polymers [11] and to synthesize branched vinyl polymers [12]. Peroxides have been also used to crosslink PEO in the melt and produce water-swellable hydrogels [13,14]. Controlled transport of biomolecules within hydrogels is crucial as it defines whether sustained administration e.g., for tissue regeneration applications [15] or acute release e.g., for the delivery anti-inflammatory agents [16] will occur. Therefore, versatile crosslinking procedures are very important for the development of novel multifunctional platforms for the investigation of loading and release of biomacromolecules.
In this work we use 2,5-bis(tert-butylperoxy)-2,5-dimethylhexane under thermal decomposition conditions to crosslink PEO in the melt in order to synthesize hydrogels with tunable mechanical and morphological properties for applications in protein and drug delivery. Swelling measurements are performed to estimate the mesh size and modulus of the swollen networks while these findings are supported by small angle neutron scattering (SANS) and rheology experiments. The release of globular proteins from the hydrogels is compatible with the morphological characteristics of the networks at the nanoscale. The prepared PEO hydrogels can be used as templates for transport of bioactive macromolecular substances.

Based on the procedure put forward by Emami et al. [13] 500 mg of PEO were mixed with 1 mL of organic solvent/Luperox mixture. The final mixtures were placed at 85 °C for 15 min to become homogeneous and the temperature was raised to 160 °C for another 15 min for the crosslinking reaction to take place. In our case other solvents, i.e., butanol and DMF, were also used apart from acetone which was originally proposed [13]. Three different peroxide/organic solvent volume ratios were used for each solvent as shown in Table 1.
Hydrogels were immersed in excess amount of water for swelling for three days while excess water was changed three times to wash uncrosslinked chains and remaining organic solvents/crosslinker.

A Bruker Equinox 55 Fourier Transform Instrument was used to record the infrared spectra (FTIR). It was equipped with an attenuated total reflectance (ATR) diamond accessory (SENS-IR) and a press. Small pieces of swollen and washed hydrogels were placed at the center of the sample holding device, were dried under nitrogen stream and 64 scans were collected in the wavenumber range 500–5000 cm−1, at 2 cm−1 resolution. Three measurements on different loaded samples were performed to confirm reproducibility.

Hydrogel samples were equilibrated in distilled water at room temperature for 24 h. The mass of the swollen networks (ms) was extracted by weighing the samples after removing excess solvent superficially with filter paper. Subsequently the hydrogel samples were placed in a vacuum oven for about one week under vacuum (at room temperature) and were weighed immediately after they were removed from the oven to obtain their dry mass (md). The swelling ratio was extracted by Equation (1). All experiments were run in triplicate.

Small angle neutron scattering (SANS) was performed on the KWS-2 high intensity/wide-q small angle neutron scattering diffractometer, at the Jülich Centre for Neutron Science (reactor FRM II). The scattering vector (q) range was 0.002–0.1 Å−1 and was covered by three separate detection configurations (2, 8, and 20 m detection length) with neutron wavelength λ = 4.5 Å. 2-D raw data were reduced by standard methodology and the reduced 2-D raw data that were isotropic were azimuthally integrated into 1-D scattered intensity . Numerically calculated model intensities used to fit the experimental data are convoluted [17] with a Gaussian function so that instrumental resolution is taken into account [18,19].

Rheological measurements were performed using a stress-controlled rheometer AR-2000 ex (TA Instruments), equipped with a plate-on-plate geometry (diameter = 20 mm). Dynamic oscillatory frequency sweep tests were carried out on the swollen hydrogels at strain amplitude 1% which was well inside the linear response. The linear response regime was estimated by oscillatory strain sweeps at constant frequency 1 Hz. Measurements were performed at 25 °C with the aid of a Peltier control system. A solvent trap was used to minimize water evaporation.

BSA and LYZ solutions of 20 mg·mL−1 concentration were prepared by dissolving protein powders in distilled water (pH 6.5) and allowing to equilibrate for 24 h at 4 °C. Swollen hydrogels were incubated in 10 mL protein solutions and kept at 4 °C for 144 h to equilibrate. Protein solution-swollen hydrogels of disc shape (1 mm in height and 8 mm in diameter) were cut with a biopsy punch, washed with distilled water to remove protein solution from their surface, and were immersed in 10 mL of distilled water at 25 °C. Aliquots of 1 mL from the solution were taken at predetermined time intervals and protein concentration was determined by UV-vis absorption at 280 nm. The aliquots were returned to the sample vial after UV-vis measurement. Experiments were run in triplicate. Calibration curves for BSA and LYZ were constructed using solutions of proteins with known concentration.

UV–vis absorption spectroscopy was carried out on a UV–vis-NIR spectrophotometer Perkin-Elmer (Lamda 19) using an 1-cm-long quartz cuvette to load the samples. The absorbance at 280 nm was recorded for the quantification of protein concentration.

Peroxide Luperox 101 was used to prepare PEO hydrogels in the melt by the thermally stimulated tertiary alkoxy radicals and abstraction of α hydrogens of PEO. This versatile synthesis scheme allows fabrication of hydrogels with mesh size in the order of the size of globular proteins (≈10 nm) and modulus between 500 and 1000 Pa. Swelling experiments in water were predictive of the mesh size and modulus of the hydrogels and they were supported by SANS and rheometry. The mesh size of the hydrogels could be tuned by the peroxide content. The diffusion of the model proteins BSA and LYZ from the hydrogels was found slower for BSA in comparison to LYZ because of their different sizes. Additionally, it was demonstrated that protein release profiles correlated with the mesh size of the prepared networks. Therefore, these hydrogels can be designed as platforms for controllable release of biomacromolecules.

This work is based upon experiments performed at the KWS-2 instrument operated by JCNS at the Heinz Maier-Leibnitz Zentrum (MLZ), Garching, Germany. 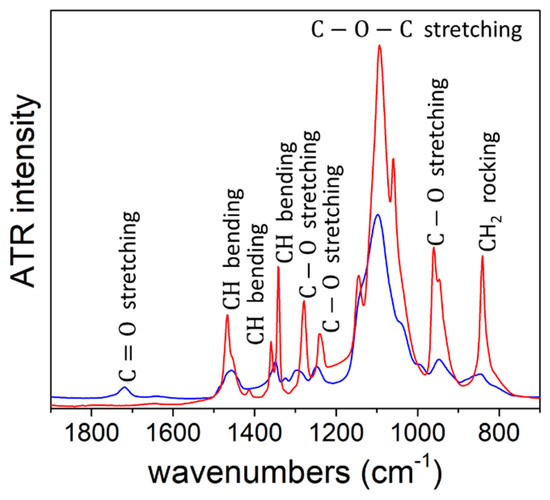 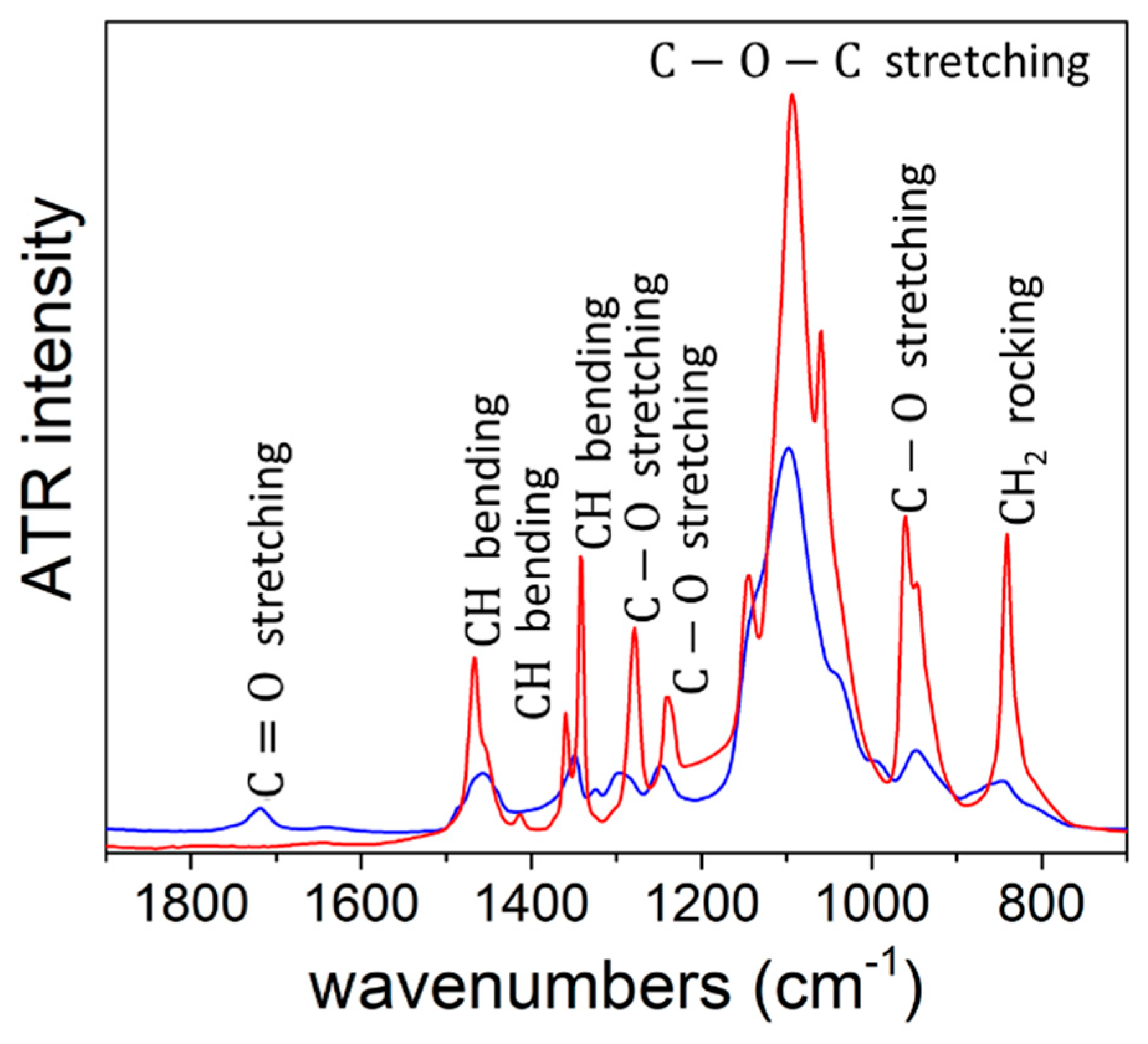 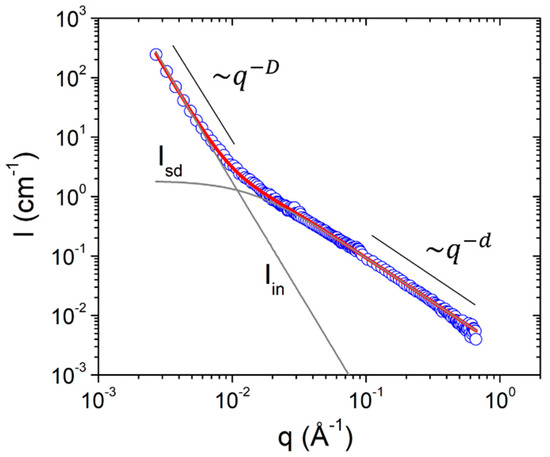 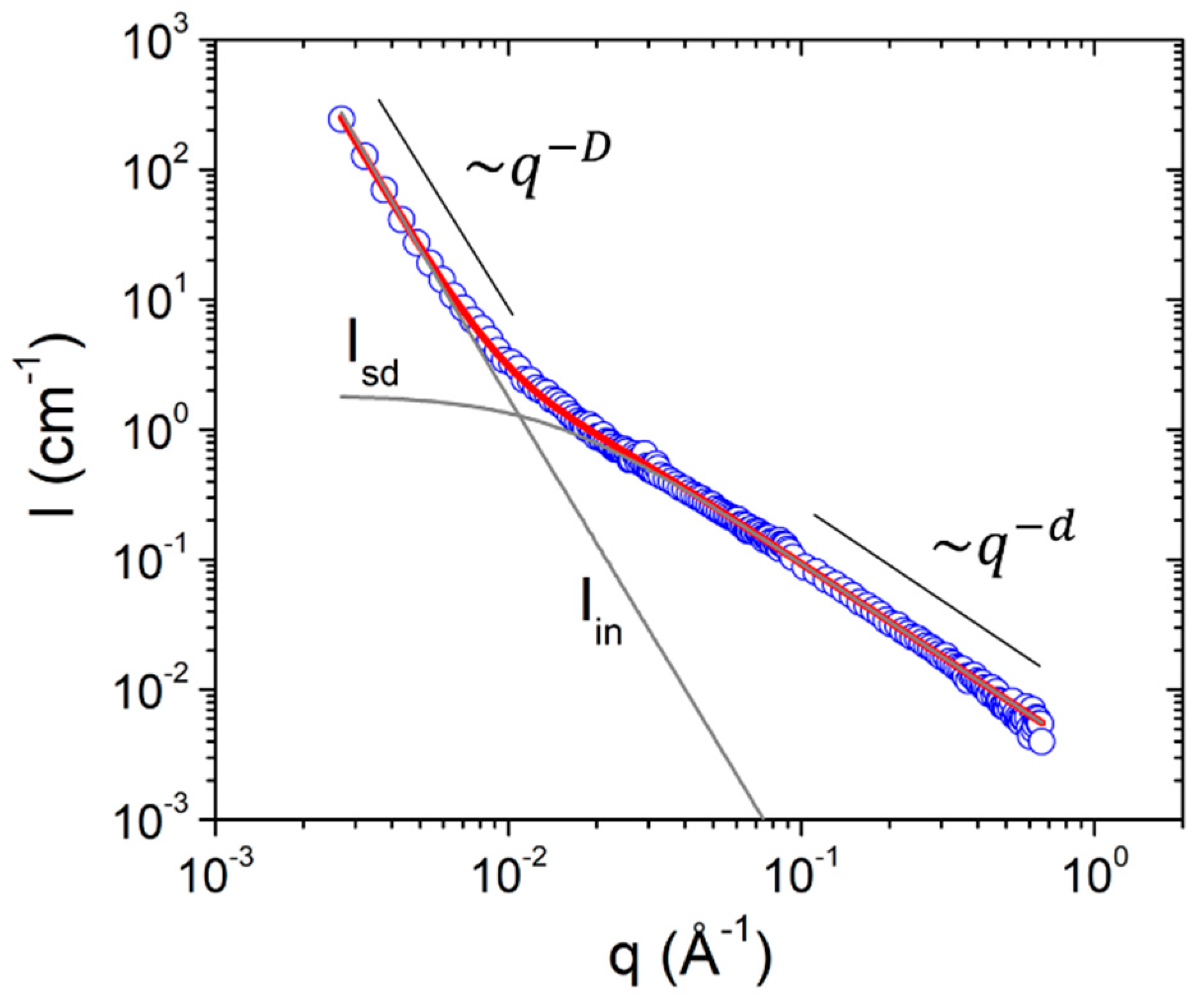 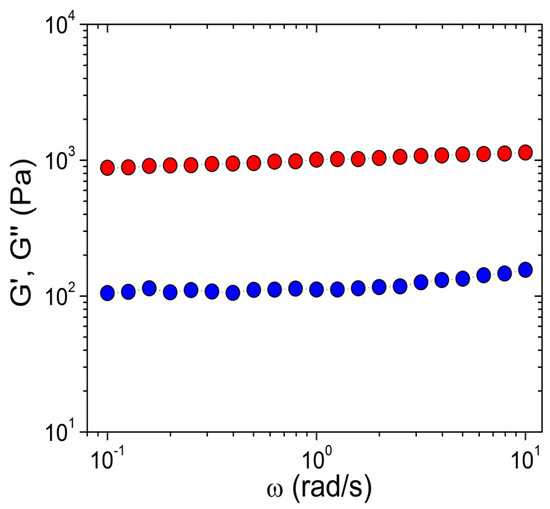 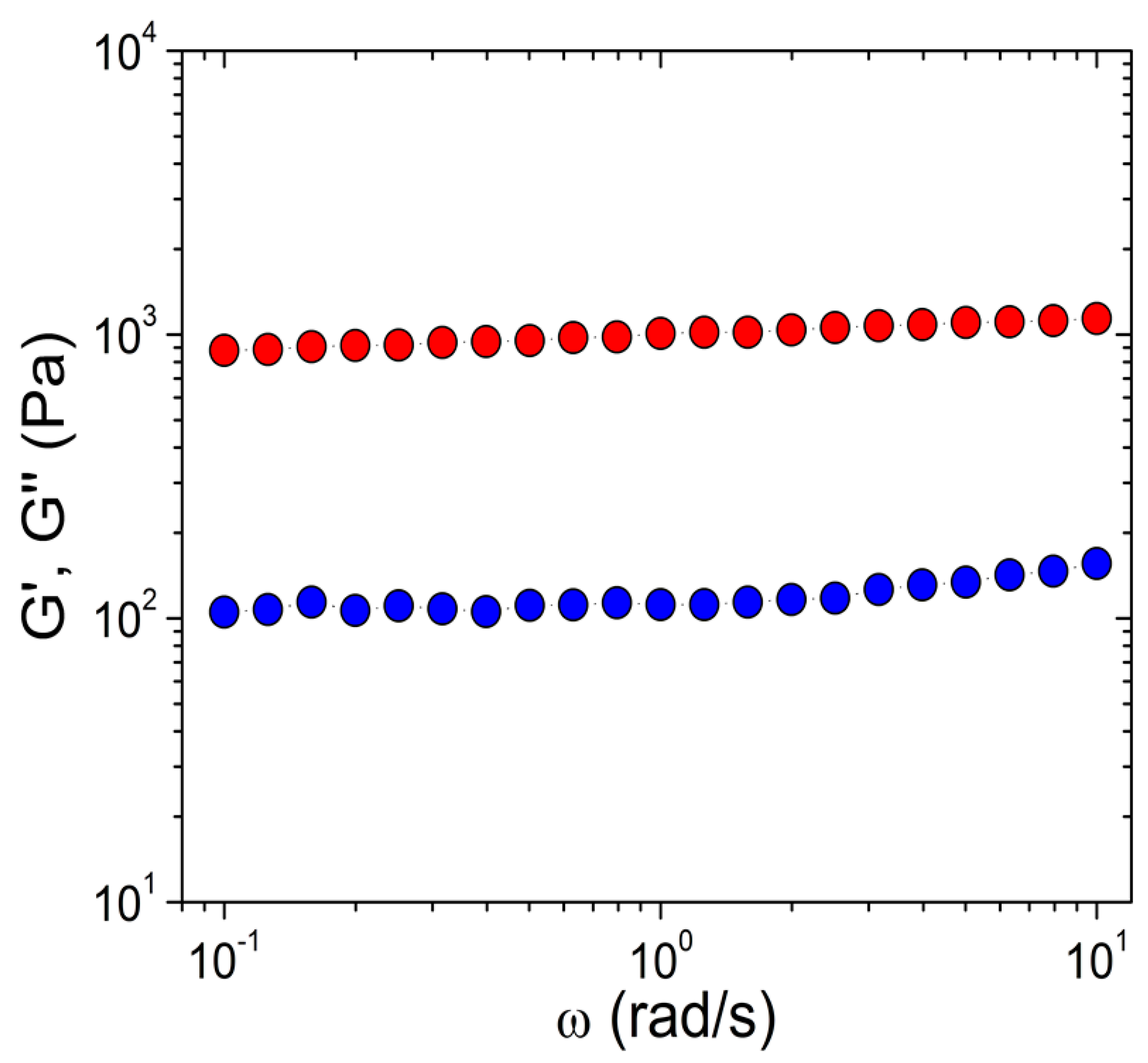 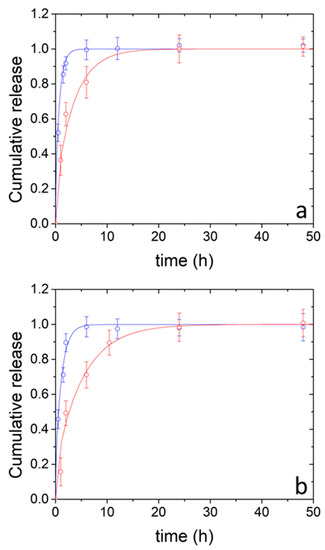 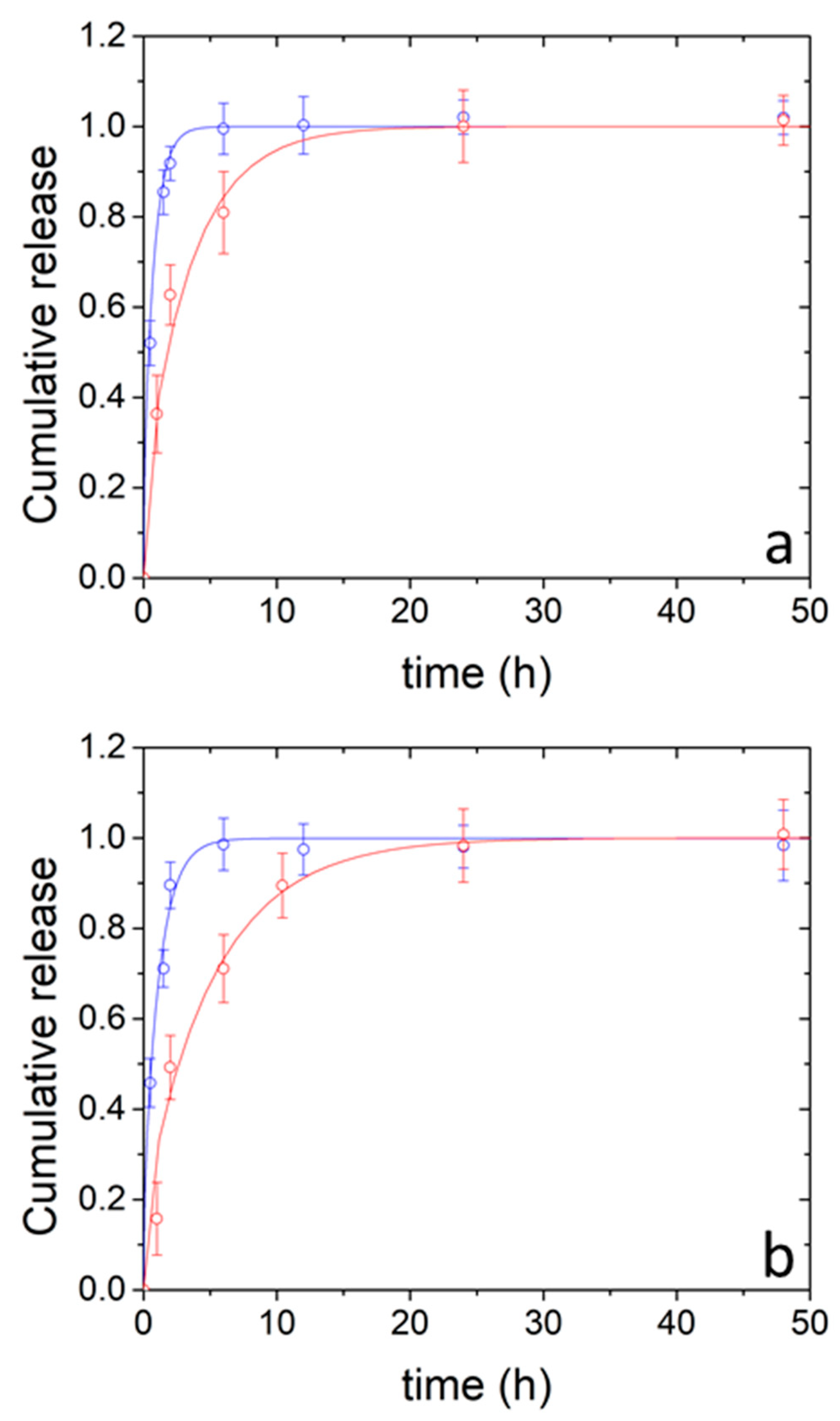