The Future of Biobanking: What Is Next?
Next Article in Special Issue

RNF6 as an Oncogene and Potential Therapeutic Target—A Review

The RNF6 gene encodes Ring Finger Protein 6 (RNF6), which functions as a ubiquitin ligase. Its functions are not entirely known, but research shows that it is involved in human cancer development. Initially, this gene was considered to be a tumor suppressor. Numerous statistical analyses on cell lines and animals indicate, however, that RNF6 functions as an oncogene, involved in signaling pathways, including SHP1/STAT3, AKT/mTOR, Wnt/β-catenin, or ERα/Bcl-xL. Due to this fact, it has become a potential prognostic factor and therapeutic target. Studies in tumor cells and model organisms using inhibitors such as total saponins from Paris forrestii (TSPf), ellagic acid, or microRNA molecules show the effectiveness of inhibiting RNF6, and through it, the pathways of tumor cell proliferation. The results of the currently available studies are promising, but the function of RNF6 is not fully understood. More research is needed to assess the role of RNF6 and to check the safety and efficacy of inhibitors. View Full-Text
Keywords: molecular targeted therapy; neoplasms; oncogenes; review; RNF6 molecular targeted therapy; neoplasms; oncogenes; review; RNF6
►▼ Show Figures 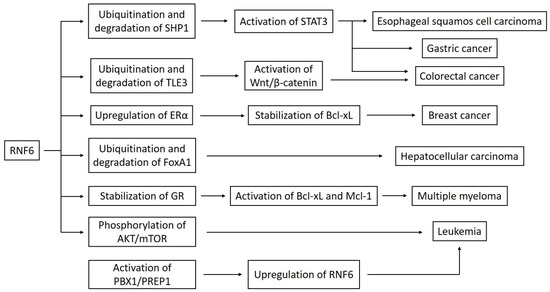