Should Veterinary Practitioners Be Concerned about Acanthamoeba Keratitis?

When presented with an animal exhibiting signs of keratitis (inflammation of the cornea), such as impaired vision, mucoid discharges, redness, swelling, and corneal oedema, most veterinarians would think of bacteria, viruses, or fungi as the potential causative agent(s). However, evidence has arisen in recent years of a possible connection between the protozoan Acanthamoeba and keratitis in animals. Acanthamoeba infection is underdiagnosed, but potentially common, in animals. In view of the paucity of evidence regarding Acanthamoeba keratitis (AK) in animals, this review has been written to increase awareness of veterinary professionals of the potential threat associated with AK and to stimulate more studies into the extent of occurrence and clinical impact of AK in animals. View Full-Text
Keywords: Acanthamoeba keratitis; animals; epidemiology; diagnostics; treatment Acanthamoeba keratitis; animals; epidemiology; diagnostics; treatment
►▼ Show Figures 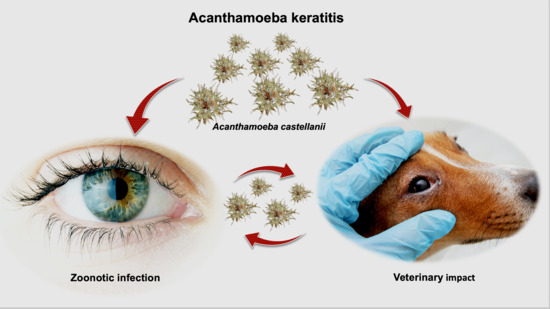 Hany M. Elsheikha
Hany Elsheikha, BVSc, MVSc, PhD, PGCHE, FHEA, DipEVPC, is an associate professor in the global health department in the School of Veterinary Medicine and Science, University of Nottingham (SVMS-UoN). Hany is also a European Veterinary Parasitology College diplomate and a European Scientific Counsel Companion Animal Parasites member. He earned his PhD from Michigan State University for research performed on the molecular evolution of the causative agent of equine protozoal myeloencephalitis. In 2005, he was awarded the prestigious American Society for Microbiology (ASM)/National Center for Infectious Diseases (NCID) Postdoctoral Fellowship. Over the past 13 years, he has been spearheading the development and delivery of parasitology teaching at SVMS-UoN. Also, he has established a multidisciplinary research programme focused on decoding the interkingdom chemical communication between the host cells and neuropathogenic protozoan parasites, with a special interest in Toxoplasma gondii. He has published more than 200 peer-reviewed papers and many other articles in professional magazines and science communication journals. Dr Elsheikha has also published six textbooks in veterinary parasitology for students, residents and veterinary professionals.
Zoom | Orient | As Lines | As Sticks | As Cartoon | As Surface | Previous Scene | Next Scene
We use cookies on our website to ensure you get the best experience. Read more about our cookies here.
Accept
We have just recently launched a new version of our website. Help us to further improve by taking part in this short 5 minute survey here. here.
Never show this again