Molecular Detection and Genotyping of Enteric Protists in Asymptomatic Schoolchildren and Their Legal Guardians in Madrid, Spain
Previous Article in Journal

Parasites are an integral part of coral reef ecosystems due to their influences on population dynamics, biodiversity, community structure, and food web connectivity. The Phylum Apicomplexa contains ubiquitous animal associates including the causative agents of globally important human diseases such as malaria and cryptosporidiosis. Despite their ubiquity, little is known about the biology, ecology, or distribution of these microorganisms in natural animal populations. In the US Virgin Islands, the dusky damselfish (Stegastes adustus) had a high but variable incidence of a Haemohormidium-like blood apicomplexan among 30 sites sampled. Microscopic analyses of blood smears allowed us to group these fish as infected, having low intensity infections, or uninfected. Regression analyses detected no significant differences in the condition indices (expressed as length–mass ratio). However, infection was clearly associated with potentially extremely high leukocyte counts among infected S. adustus that were not seen in uninfected fish. These results suggested the potential for some impact on the host. Linear mixed effects models indicated that S. adustus population density and meridional flow velocity were the main predictors of apicomplexan prevalence, with presence of other Stegastes species, population distance from watershed, zonal flow velocity, the complexity of the surrounding habitat, and season not showing any significant relationship with fish infection. View Full-Text
Keywords: apicomplexan; damselfish; Caribbean apicomplexan; damselfish; Caribbean
►▼ Show Figures 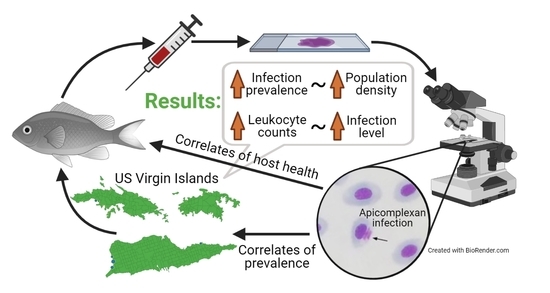