Effect of a Commercial Disinfectant CLORICAN® on Acanthamoeba spp. and Naegleria fowleri Viability

Dirofilaria immitis and Dirofilaria repens are mosquito-borne pathogens responsible for dirofilariasis in humans and animals. Their transmission and spread depend on the activity of vectors and the frequency of hosts in a given area. Here, we investigated the efficacy of a monthly multimodal prophylactic (MMP) strategy against canine dirofilariasis on Corsica Island (France). The study was conducted as evidence of an efficacy trial in which eighty dogs were divided into two groups: (i) one test group consisted of 25 dogs under the MMP [per-os administration of 1.5 tablets of milbemycin-oxime-praziquantel (Milbactor®) and a topical line-on application of a 3.6 mL solution of dinotefuran-permethrin-pyriproxyfen (Vectra® 3D)] and (ii) a control group under different real-life prophylactic treatments (RLP) based on the use of ectoparasiticides (different formulations: deltamethrin, fluralaner, fipronil) and/or macrocyclic lactone-based products (milbemycin-oxime/praziquantel, milbemycin-oxime, moxidectin) during the period from June to October 2017. All animals were followed up for one year, with blood collected at day 0, with follow-up at 6 and 12 months. Samples were tested for Dirofilaria spp. by species-specific qPCR. At the end of the study, no new case of Dirofilaria spp. infection was detected in the test group. However, the cumulative incidence of Dirofilaria spp. infection was 16.4% (n = 9; p = 0.027) in the control group. The data illustrate that, in contrast to RLP treatment, which failed to protect at least 16.4% of dogs, the MMP based on the simultaneous administration of milbemycin oxime-praziquantel and dinotefuran-permethrin-pyriproxyfen efficiently protects dogs in a high-risk area from Dirofilaria spp. infection.
Keywords: dog; Dirofilaria spp.; multimodal prophylaxis; prevention dog; Dirofilaria spp.; multimodal prophylaxis; prevention

Dirofilaria immitis and Dirofilaria repens are nematodes of tissues and cavities responsible for cardiopulmonary and subcutaneous and/or subcutaneous/ocular dirofilariasis in canids and humans, respectively [1]. These heteroxenous parasites produce blood-dwelling microfilariae, which are assumed by blood-feeding vectors (i.e., Culicidae of the genera Culex, Aedes, Ochlerotatus, Anopheles, Coquillettidia, Armigeres, Mansonia and Psorophora) [2] and go through two stages to reach the infective stage (L3), which can then be transmitted to a new receptive host. These parasites appear to be associated with an episystem complex involving multiple factors such as temperature, movement and abundance of vectors and hosts, as well as the pathogen itself [3], which complicates disease control [4]. Epidemiological studies indicate the continuous spread of Dirofilaria spp. in human and canine populations, especially in Europe, where endemicity and sympatric occurrence have already been reported.
Two different preventive strategies are used by practitioner veterinarians against Dirofilaria spp. infection, mainly based on seasonal application of repellent/insecticidal products against vector bites and thus parasite transmission, or on macrocyclic lactones (ML) targeting Dirofilaria larvae. Recent recommendations from the European Society for Dirofilariosis and Angiostrongylosis (ESDA), the European Scientific Counsel Companion Animal Parasites (ESCCAP) and the American Heartworm Society (AHS) indicate the need to strengthen preventive measures by combining both methods as a multimodal prophylaxis in endemic areas [5,6]. The multimodal prophylactic (MMP) strategy was initially developed as an urgent solution to prevent the spread of ML-resistant strains of D. immitis, which has been proven to be a promising chemoprophylaxis under experimental conditions [7]. However, no data are available on the efficacy of the MMP strategy against Dirofilaria spp. infection under natural conditions.
Corsica is a French island known to be endemic for Dirofilaria spp. for four decades. Moreover, the island is surrounded by highly endemic areas and represents a touristic destination for more than 750,000 visitors and their pets each year, which places it in first rank in the dissemination of Dirofilaria spp. and other vector-borne pathogens to non-endemic areas [8,9,10,11]. Such an epidemiological context encompasses all risk factors for Dirofilaria spp. transmission and spread and thus represents best challenge for the evaluation of the newly developed preventive strategies under natural conditions. In the current study, the efficacy of the MMP strategy based on simultaneous treatment with Vectra® 3D (dinotefuran-permethrin-pyriproxyfen) (Ceva Santé Animale, Libourne, France) and Milbactor® (milbemycin oxime-praziquantel) (Ceva Santé Animale, Libourne, France) against mosquito vectors and Dirofilaria spp. larvae, respectively, was investigated.

At day 180 of follow-up, no new cases of Dirofilaria spp. infection were detected in the studied dogs from both the test (n = 25) and control (n = 55) group. However, unlike the test group, 9 (16.4%) new infections consisting of 8 (14.6%) and 1 (1.8%) D. immitis and D. repens, respectively, were recorded in the control group at Day 365, showing a significant difference between these two groups (Table 1) and a protection level of 100% against Dirofilaria spp. transmission in test group.

The present study demonstrates the field efficacy of consistent administration of larvicidal (macrocyclic lactones) plus vector-preventive products (repellents) as MMP against Dirofilaria spp. infection in endemic areas and the first European field study confirming the year-round efficacy of MMP on a monthly schedule against these vector-borne parasites. Dirofilaria immitis is responsible for canine cardiopulmonary dirofilariasis (known as heartworm disease) with varied symptoms including exercise intolerance, fatigue to right heart and lung failure [12]. Treatment of canine heartworm can be life-threatening, expensive and complex [6,12]. In contrast, D. repens infections are often asymptomatic [3]. However, fatal outcomes were observed in D. repens infestation due to the massive release of the filarial endosymbiotic bacterium Wolbachia after microfilaricidal treatment [13]. Therefore, to avoid these complications, preventive chemoprophylaxis remains the best approach to control these parasitoses [5,6].
The efficacy evaluation of the MMP protocol was conducted here as evidence of an efficacy trial using a positive control group. It is expected that the protective success in the test group compared to the control group is due to several elements, such as compliance, which is known to be low in France (6%) [14], leading to prevention failures [15]. Another key factor could be the treatment period, where year-round chemoprophylaxis was challenged compared to seasonal chemoprophylaxis in the control group. In southern Europe, such as Corsica, the presence of year-round active vectors of Dirofilaria spp. such as Stegomyia albopicta has been reported [16,17]. Consequently, year-round control of such vectors is recommended [4]. Another key factor for the effective protection in the test group could be the combined use of two different products against Dirofilaria vectors and parasite larvae. This approach has been registered to provide broad-spectrum activity against nematodes and ectoparasites in dogs [7,18,19]. In addition, the separate use of Vectra® 3D (dinotefuran-permethrin-pyriproxyfen) and Milbactor® (milbemycin oxime/praziquantel) have been proven to be effective against a wide range of vectors and Dirofilaria larvae [20,21,22,23,24], leading to a reinforcement of their synergetic effect against Dirofilaria transmission when administrated concomitantly.
In addition to the direct effect on mosquito-borne helminths, the intended multimodal prophylactic strategy based on year-round administration of Vectra® 3D and Milbactor® on a monthly schedule provides reliable control against Dirofilaria spp. infections in dogs in highly endemic areas, and it should be promoted more widely in and around these areas to prevent the spread of Dirofilaria spp. to dogs and humans.

From March 2017 to April 2018, a cohort study was conducted in three neighboring areas on Corsica Island (i.e., Ventiseri 41°55′52.5″ N; 9°23′58.3″ E, Marine de Solaro 41°50.1114′ N; 9°22.482′ E and Aleria 42°6′15.293″ N; 9°30′44.744″ E) as evidence of efficacy trial [25], according to the guidelines on data requirements for veterinary medicinal products for the prevention of transmission of vector-borne diseases in dogs and cats [26].
Dogs were recruited after obtaining owner consent. Inclusion criteria were qPCR-negative for at least one Dirofilaria spp., with the absence of clinical signs consistent with heartworm, which could be a threat to a dog’s life during the follow-up, an age of at least one year at the time of inclusion and the application of prophylactic treatment against dirofilariosis. Finally, dogs lost during follow-up were excluded from the study (Figure 1).

A total of 80 dogs were included and allocated into two groups:
Citrated blood samples were collected at the time of enrollment (Day 0), after six (Day 180) and after 12 (Day 360) months, in accordance with the requirements of the Animal Ethics Procedures of French veterinarians and with the consent of dog owners. Genomic DNA was extracted individually from each whole blood using the Biorobot EZ1 System with the EZ1 DNA tissue kit (Qiagen, Courtaboeuf, France) according to the manufacturer’s instructions, and then screened for the presence of Dirofilaria spp. at each time point using species-specific multiplex qPCR, as previously described [27].

4.3. Estimation of Incidence and Data Analysis

Animals were considered positive if the infection with at least one Dirofilaria species was detected. The incidence density rate (IDR) represented by the rate of newly infected dogs (i.e., new infections) was calculated. Gray’s test [28] was applied to compare between the test and control group for Dirofilaria spp. incidence. Significance was defined at alpha ≤ 0.05. Statistical analysis were performed using Addinsoft XLSTAT 2018 (Data analysis and statistical solution for Microsoft Excel, Paris, France). The protection level of MMP was expressed as the percentage of success in blocking the transmission of Dirofilaria spp. infections and calculated at the end of the follow-up period using the following formula: Protection (%) = 100 (), where IDRc and IDRt represent the incidence density rate of Dirofilaria spp. infection in the control and test group, respectively [26].

Ethical review and approval were waived according to French and European legislation because the study does not involve laboratory animals and protocols.

We thank Sandrine Ferrandi, Marie-Hélène Filippi, Mickaël Boni, Laetitia Guidicelli and all the dog owners for their help. 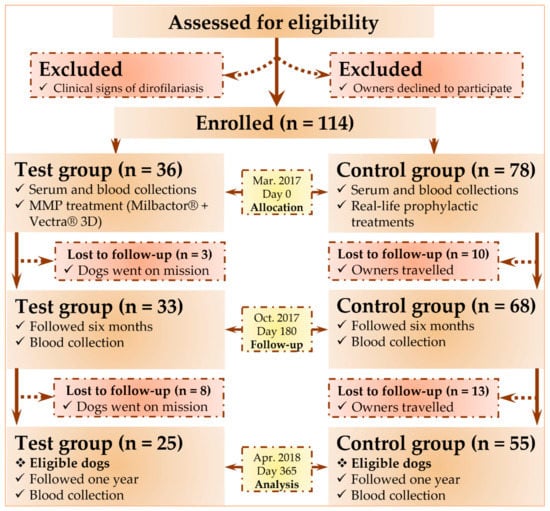 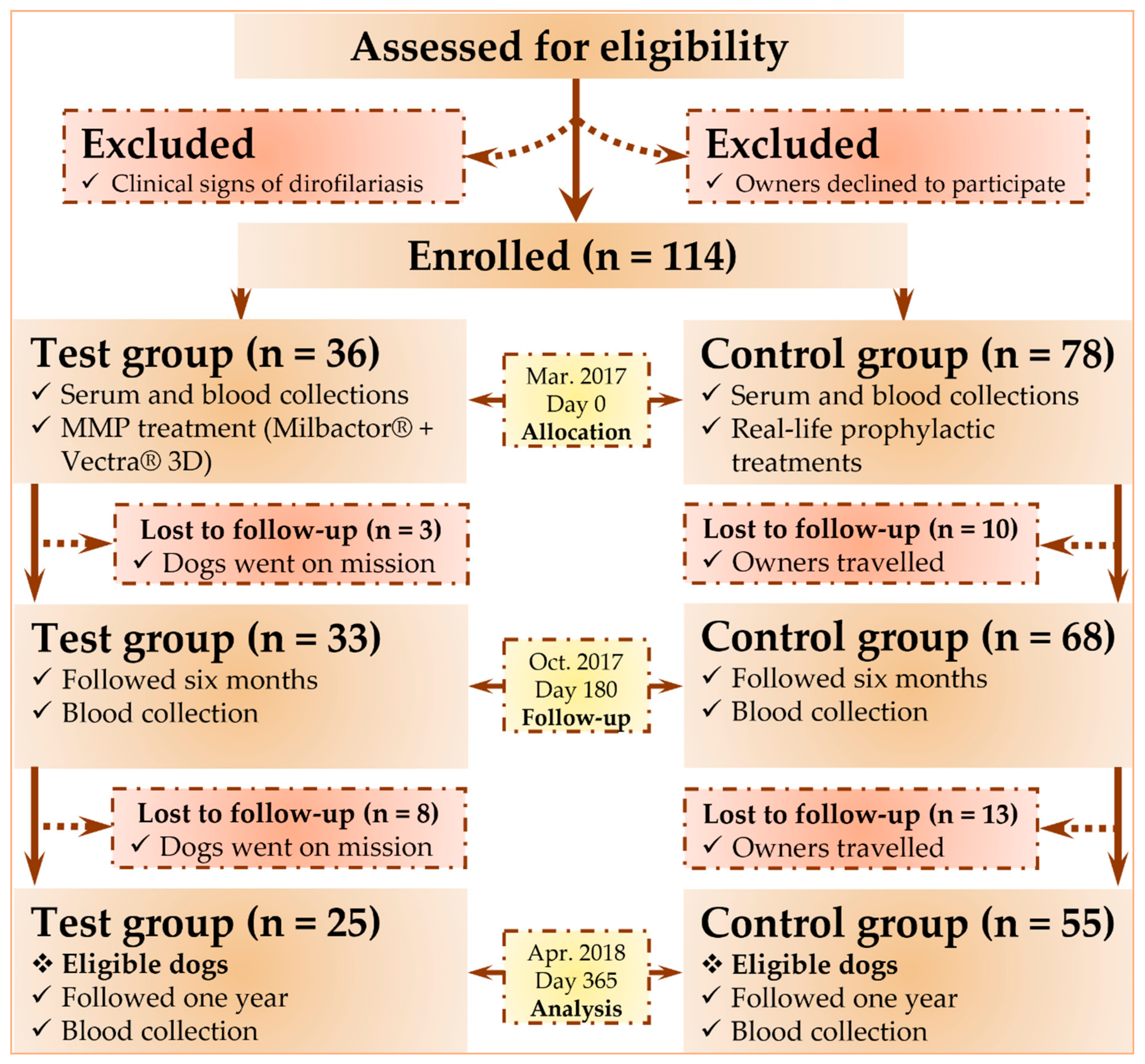 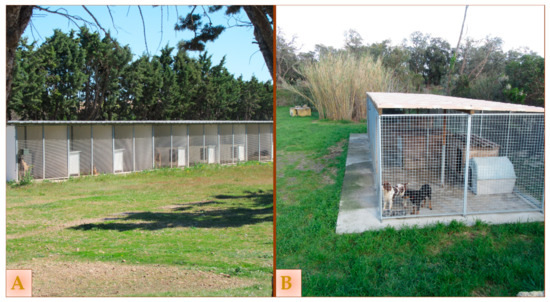 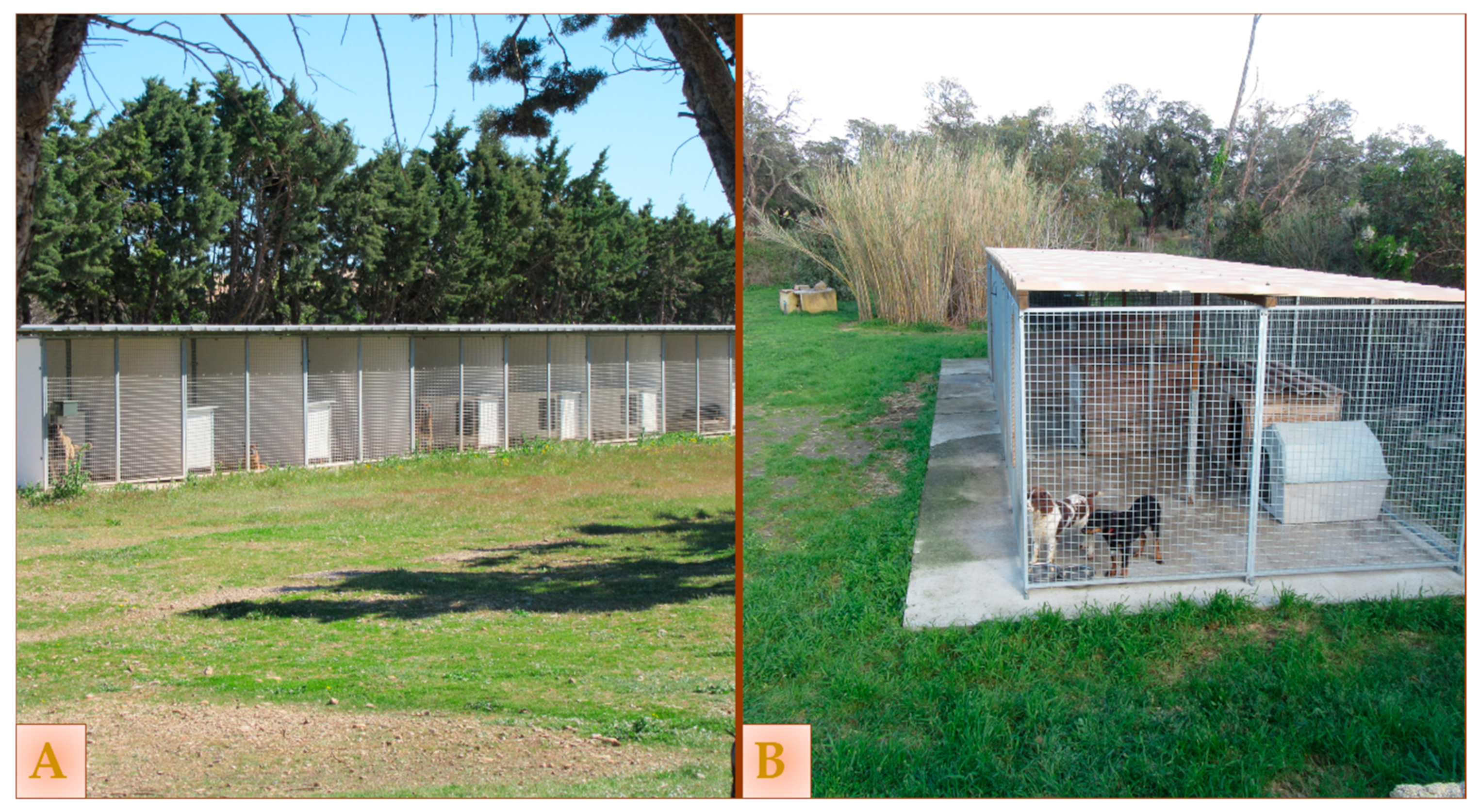