A New Nanomaterial Based Biosensor for MUC1 Biomarker Detection in Early Diagnosis, Tumor Progression and Treatment of Cancer

The performance of thin-film optoelectronic devices, such as organic and perovskite light-emitting diodes (OLEDs and PeLEDs) and organic photovoltaics (OPV), has been increasing steadily over the last decades [1,2,3,4]. However, their efficiencies are still limited by losses inherent to the device architecture. In a default device stack, more than 80% of the light cannot be utilized because of coupling to substrate modes, waveguided modes in the active layers or plasmonic modes at metal interfaces [5,6]. Various methods to access the light trapped in these modes such as the application of high-index substrate materials or the addition of one or multiple extraction lenses have been proposed [7,8]. Another promising approach is the introduction of a periodic or aperiodic nanopattern to the interfaces in the layer stack [9,10,11,12,13,14,15]. The nanostructure reduces total internal reflection and enables the outcoupling of quasi-guided modes [16,17]. Additionally, charge carrier injection may benefit from local field enhancement effects at nanopatterned electrodes [18,19]. To achieve a significant increase in coupling efficiency, the geometrical dimensions of the employed nanopattern must be adjusted to the particular device design. Suitable parameters can be determined via simulation of the layer stack [20]. In an LED, the maximum increase in outcoupling efficiency should match the emission maximum, whereas the maximum increase in coupling to the active layer in a solar cell should coincide with the absorption peak. Aside from enhancing the overall efficiency, periodic nanopatterns also allow for directional coupling of selective wavelengths [21,22], and may facilitate nanoparticle alignment during device fabrication [23,24].
Recently, flexible organic optoelectronics have gained increased attention as they enable novel applications such as bendable or foldable displays, wearable devices or printable sensing systems [25,26,27,28]. The integration of nanopatterns in flexible devices may increase performance and add new functionality [29,30,31]. Mechanical deformation of nanogratings results in shifting of resonance characteristics, making such devices promising candidates for strain sensors or tunable light sources [32,33]. Consequently, the utilized nanomanufacturing process must be suitable for the fabrication of flexible nanogratings on large device areas (cm² range) which are required for most of these applications.
In order to comply with specific requirements for different device architectures, a process to generate nanopatterned electrode films for device development must also enable the creation of different shapes and pattern designs with adjustable structural heights. This effectively requires a highly controllable greyscale patterning method. Even though multiple greyscale electron beam lithography (EBL) techniques have been developed [34,35,36,37], they are usually complex, time-consuming and not suitable for large-scale patterning. Other techniques such as interference lithography (IL) or extreme ultraviolet lithography (EUVL) are available for large area patterning, but at the same time require high equipment investment costs and oftentimes multiple exposure steps to obtain two-dimensional greyscale patterns [38,39]. On the other hand, nanoimprint lithography (NIL) is a low-cost process allowing for high-throughput reproduction of multiscale patterns [40,41,42,43]. However, the obtainable nanopatterns are essentially restricted to the geometrical shape and dimensions of the imprint template [44,45].
In this work, we present a manufacturing method to introduce nanopatterns of variable shapes and heights into a transparent conductive indium tin oxide (ITO) film on a glass substrate. As ITO is the most commonly used electrode material for thin film optoelectronics, the resulting samples can be directly used for device fabrication. Additionally, they may also be utilized as imprint templates for simple reproduction of the generated pattern by NIL. We are able to create arbitrary two-dimensional greyscale patterns by performing multiple successive nanoimprint steps employing the same or different template patterns in each step. Our method allows for the utilization of master templates fabricated by other techniques such as IL or EUVL for simple and cost-efficient variation of feature heights and generation of composite nanopatterns. In contrast to other works applying multiple nanoimprint steps to achieve multi-dimensional patterns [46], we cure and etch the imprint resist after each imprint step. In doing so, we are able to maintain structural conformity to the desired pattern and to obtain greyscale features.

The different stages of the nanopatterning process are depicted in Figure 1. One or more initial master templates patterned by electron beam lithography, laser interference lithography, or other techniques are required as a basis for the resulting nanopattern. We used commercially available glass templates (25 × 25 mm², AMO GmbH, Aachen, Germany) patterned by conventional laser interference lithography which hold periodic one-dimensional nanogratings with period lengths ranging from 400 to 600 nm and a grating height of 140 nm. From the master templates, we reproduced negative imprint templates from polydimethylsiloxane (PDMS), which we applied for up to three successive imprints. Subsequently, we employed a standard UV nanoimprint process described previously to impress the positive pattern into an imprint resist layer [47]. Patterning was performed on ITO-coated glass substrates (25 × 25 mm², specified ITO layer thickness 140 nm ± 20 nm, Lumtec, New Taipei City, Taiwan) utilizing the UV-curable imprint resist Amonil MMS4 (AMO GmbH, Aachen, Germany), which is an organic–inorganic composite containing zirconium alkoxides. The imprint resist was spin-coated onto the substrate surface and the imprint template was manually applied before UV curing. Since the grating height of the master template is generally lower than the total imprint resist layer thickness, a residual layer of imprint resist remains between the nanopattern and the ITO coating, which is removed during the pattern transfer. After reproduction of the one-dimensional pattern in the resist, we transferred the structure into the ITO layer by ion beam etching (IBE) using an IBE system PC3000 (Oxford Instruments, Abingdon, UK). We employed a purely physical ion etching technique using only argon (Ar) plasma as the etchant in order to achieve a highly anisotropic etching. Choosing an RF power of 500 W and a beam current of 350 mA at a gas pressure of 8 torr allowed for a precisely controllable etching process while maintaining a reasonable processing time, resulting in an ITO etching rate of 22.4 nm/min. A detailed etching rate analysis including the etching rate for the imprint resist is provided in Section 3 of this work. Following the pattern transfer, we removed any residues of the imprint resist with tetramethylammonium hydroxide using a commercial photoresist stripper (TechniStrip P1316, MicroChemicals, Ulm, Germany). By repeating the imprint and etching process, rotating the imprint template by an angle for each imprint step, we obtained two-dimensional greyscale patterns on an area of around 4 cm² in the ITO. A digital photograph of an ITO layer patterned with the method described above is depicted in Figure 2.

We have demonstrated a method to generate variable two-dimensional greyscale nanopatterns in indium tin oxide using only a one-dimensional nanoimprint master template. The patterning process consists of multiple successive steps of nanoimprint lithography and ion beam etching. Greyscale features are obtainable because we cure and etch the imprint resist after each imprint step, allowing individual etch durations for each etching step. Additionally, we employed secondary ion mass spectrometry to track the etching progress and precisely control the etching depth, yielding two-dimensional patterns with variable feature height. Although the fabricated nanopatterns were not integrated into optoelectronic devices during this work, we expect device performance to be similar to devices using nanopatterned ITO electrodes fabricated by other techniques [14,19]. Since the generation of complex multi-dimensional patterns from one-dimensional master templates requires multiple imprint and etching steps, exact reproducibility between different samples may be difficult to achieve. We, therefore, envision the main application of our method to be the fabrication of new master template patterns. Subsequently, one may utilize these master templates for pattern duplication via highly reproducible standard nanoimprint lithography techniques. We demonstrated this workflow by reproducing multiple etched patterns using a standard UV nanoimprint lithography technique. Generating new variable master templates by nanoimprint lithography and ion beam etching using only one or few existing templates is particularly beneficial in cases where greyscale EBL is not feasible due to the fabrication-time constraints with large substrate sizes. The advantage of our technique is that all processing steps are performed in parallel for the complete surface with a fixed process time independent of substrate size. Our technique may be combined with laser-interference lithography approaches for generating different nanostructure depths and composite nanostructures without renewed laser exposure. The process described in this work exemplifies this procedure by utilizing only three master templates fabricated externally by laser interference lithography to produce a variety of two-dimensional nanopatterns with different shapes and feature sizes. This approach allows for simple variations of structural parameters in cases where repeated fabrication of master templates is not viable due to time or cost constraints.

Data are contained within the article. 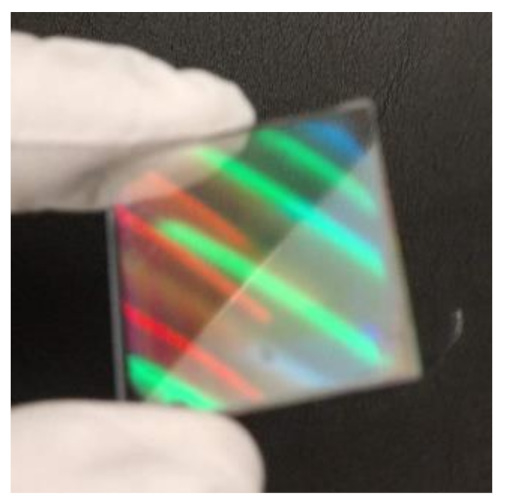 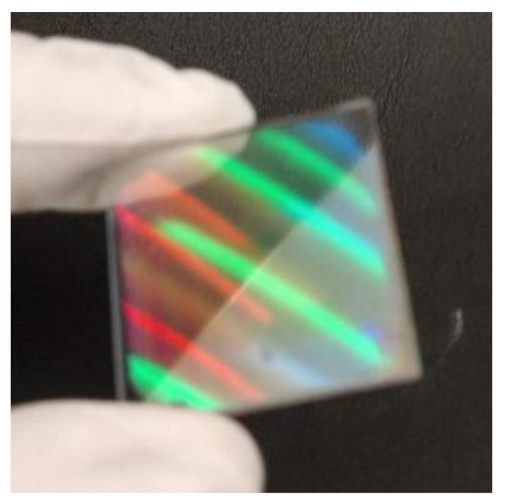 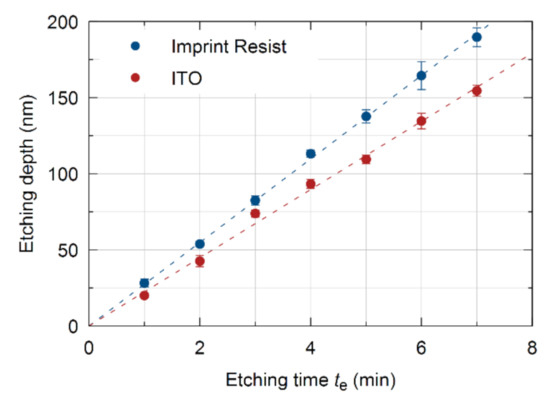 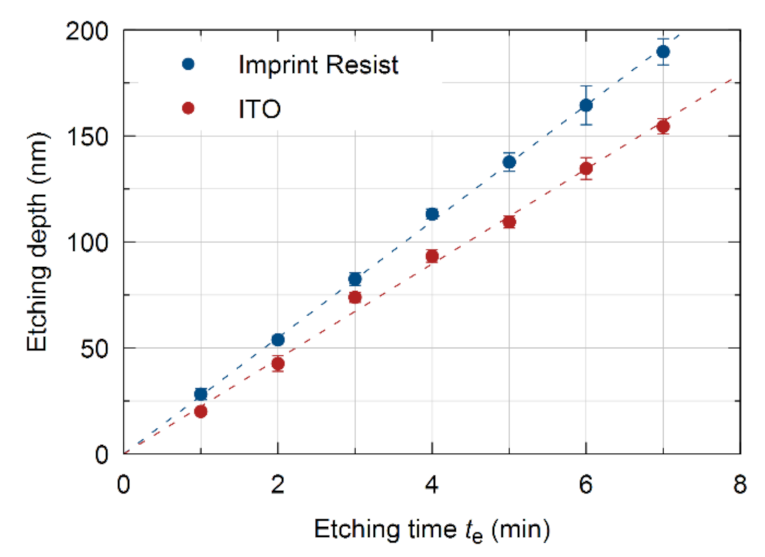 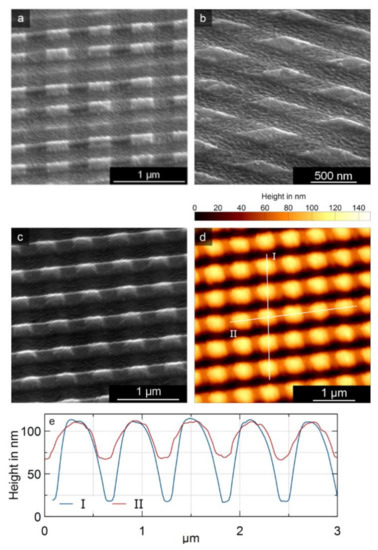 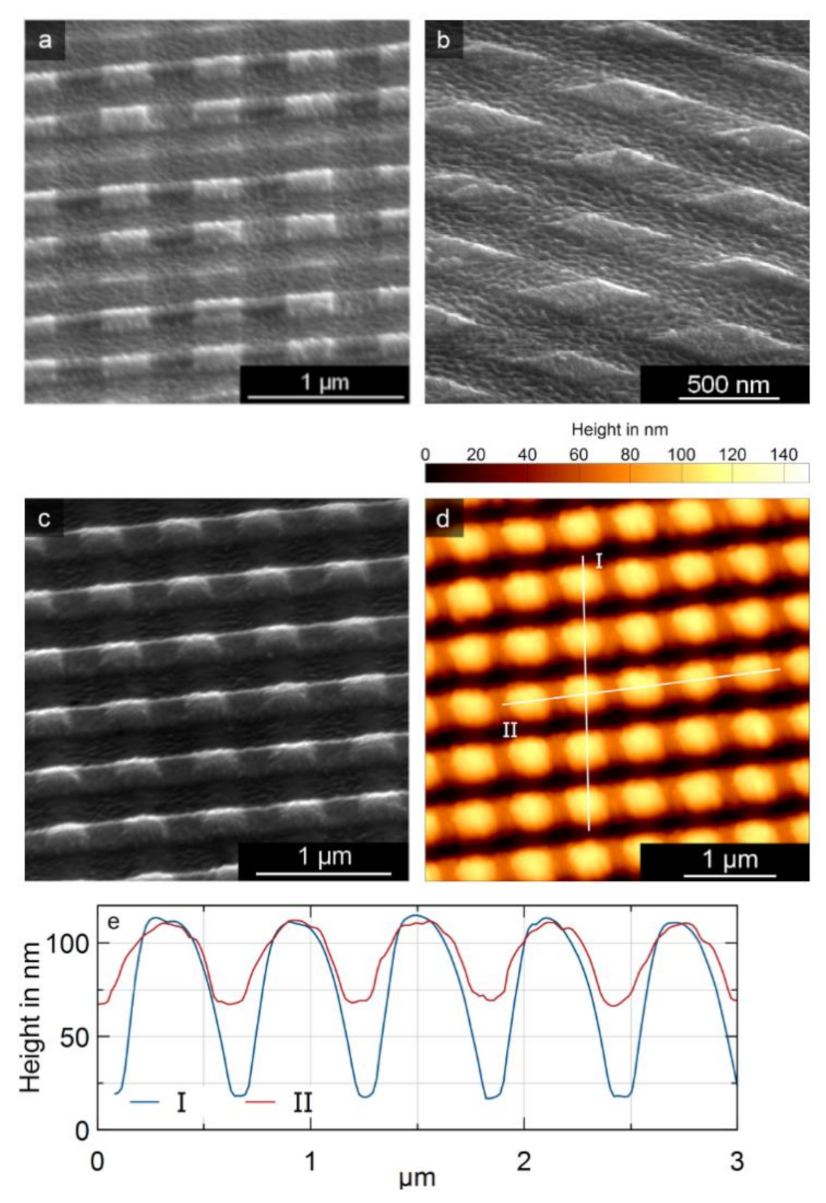 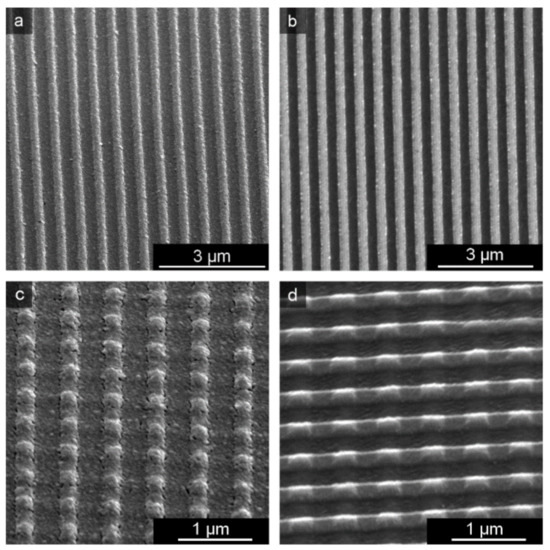 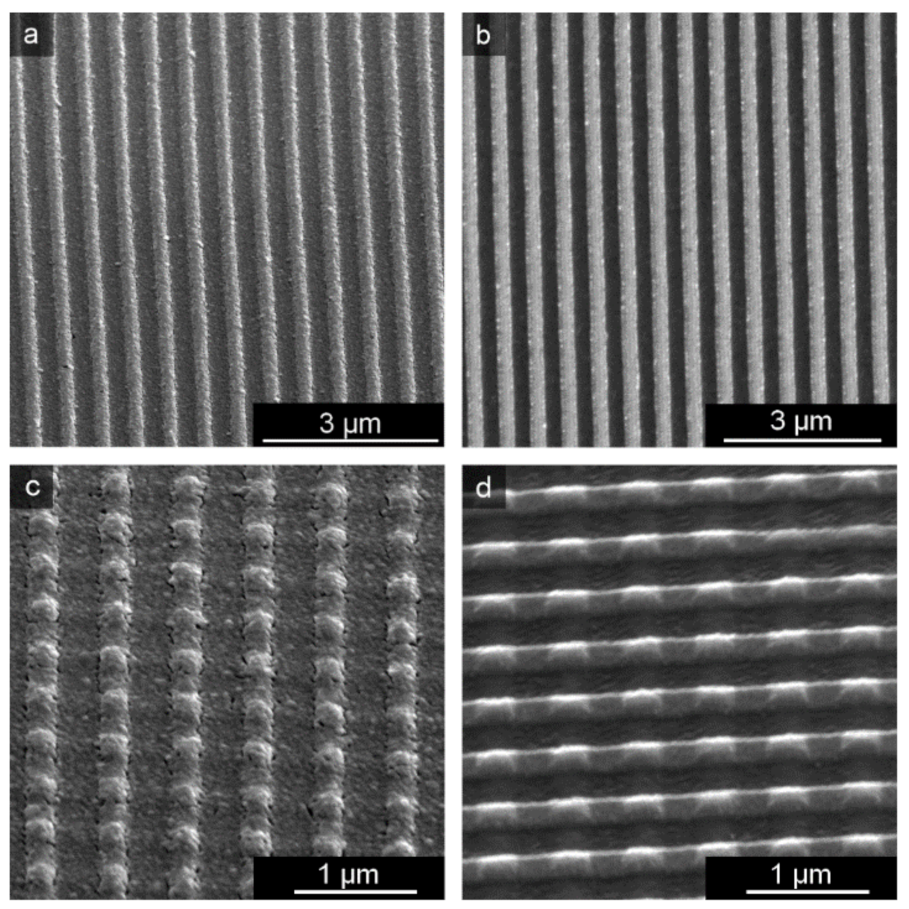