Since the early isolation of atomically thin layers of molybdenum disulfide (MoS2) [1], niobium diselenide (NbSe2) [2] and graphite [3], there has been steady development in the methods to manipulate and control placement of two dimensional (2D) materials. Seemingly austere techniques using adhesive tape and polymers to isolate and transfer these materials [4,5,6,7,8,9,10] have driven recent research into surprising new directions. For instance, combining isolated materials into heterostructures opens almost limitless possibilities in device properties and functionality [11]. Intimate contact between two materials with similar lattice constants reveals reconfiguration of the electronic band structure of these materials as a result of a Moire superlattice [12]. Recently, the ability to precisely rotate and align materials has led to the unexpected observation of superconductivity in these heterostructures [13,14].
Of the many techniques developed thus far [10,15], the so-called van der Waals pick up method [7,9,16,17] is preferable in the construction of heterostructures because the layers are not directly exposed to polymers during stacking, resulting in clean interfaces. A noticeable drawback of the technique is a reliance on thin layers of polycarbonate (PC) or polypropylene carbonate (PPC) that must be mixed and prepared, spin-coated or applied to a glass slide before use. In our use of PPC, there is noticeable fatigue of the thin film after many (>5) stacking sequences that can lead to time consuming failure in fabrication from flake cracks, folds and unexpected stack transfers before completion.
Recently, it has been shown that commercially available nitrocellulose polymer solution (nail polish) can be used to pick up 2D material flakes [18]. Rebollo et al. additionally showed that these flakes and simple heterostructures can then be transferred to any substrate or trench to create suspended structures and cavities. These developments have prompted our interest in using nail polish to construct heterostructures in a modified van der Waals pick up technique.
Building on these recent results, we present a heated technique to assemble and transfer van der Waals heterostructures using common nail polish. We show that 2D materials can be picked up from Si/SiO2 substrates, stacked by van der Waals forces, and transferred by a high temperature melt of the nail polish. Nail polish is a favorable alternative to thin polymer films used in previous van der Waals pick techniques. Whereas PC and PPC films must be mixed a carefully prepared before use, a simple drop of cured nail polish suffices to assemble multi-material (greater than 5 layer) heterostructures without noticeable polymer fatigue. We compare several clear nail polish brands and find that Revlon Nail Enamel, Clear 771 stands out in terms of stability and stacking characteristics. Finally, to demonstrate the feasibility of our approach, we fabricate two top-gated devices and report their electronic properties.

To demonstrate the versatility of our technique, we present two field-effect transistors fabricated using nail polish and report their electrical characteristics. The optical images and electrical characteristics of the devices, one fabricated with graphene and one with MoS2 are displayed in Figure 3. Our assembly and transfer technique allows for quick fabrication, roughly 2.5 h for each stack, of such devices utilizing prepatterned electrodes. This amounts to a stacking rate of 1.6 flakes/h. This is equivalent to the time reported by Rebollo et al. for transfer of one flake [18], less than an hour, and slightly faster than the automated stacking time, one flake per hour, reported by Masubuchi et al. [21]. By precisely arranging the individual layers, they can be placed in contact with prepatterned electrodes on a Si/SiO2 substrate to create an electrical device. The prepatterned electrodes are created using standard photolithography techniques. The gold electrodes are 20 nm thick and have a 5 nm thick sticking layer of chromium below them. It should be noted that while our technique works well for individually stacked devices, there may be better solutions for scalable transfer of 2D materials [22,23,24].
A graphene device is shown in Figure 3a–c and it consists of four flake layers. A large BN flake is used to pick up a graphite flake which is used as a top gate electrode. This electrode is isolated from the channel using another BN flake. The graphene is then picked up last. A schematic of the stack is shown in the inset of Figure 3a. The stack is transferred to prepatterned gold electrodes on a Si/SiO2 substrate. In Figure 3b, each layer is shown using a transparent overlay of the same optical image in Figure 3a. The narrow graphene flake forms a channel between the left-most two gold electrodes. The top gate graphite flake makes connection with the top-most gold electrode. The drain current (I) as a function of top-gate voltage () at a bias of 50 mV is shown in Figure 3c. The corresponding resistance (R) is plotted on the right axis of the same plot. A resistance peak is apparent around V corresponding to charge neutrality (or the Dirac point) in graphene. Charge neutrality is shifted significantly from V, indicating residual doping, most likely due to surface water at the interface between the graphene flake and SiO2 [25,26,27,28].
An MoS2 FET is shown in Figure 3d–f. The four layer stack is similar to the first graphene device but an MoS2 flake is picked up instead of graphene. An optical image of the device is shown in Figure 3d and a model of the stack is shown in the inset. In Figure 3e, each layer is shown using a colored overlay. The MoS2 flake forms a channel between the right-most two electrodes and the top-gate graphite flake makes contact with the left-most two electrodes. The drain current plotted as a function of top-gate voltage at a bias voltage of 500 mV is shown in Figure 3f. The log current is plotted on the right axis. A clear n-type transistor action is recorded with an On/Off ratio of .

Building on very recent advances in 2D material manipulation [18], we have presented a heated technique for the fabrication and transfer of complex van der Waals heterostructures using common nail polish. We create glass slides with a drop of nail polish which is used as a sticky polymer to pick up 2D materials. We showed that multi-material, multilayer stacks can be created with this technique. Comparing four different nail polish brands, we find that Revlon Nail Enamel, Clear 771 stands out as a sturdy polymer for heated assembly and transfer of heterostructures. Finally, we fabricated and measured two field-effect transistors, one made from graphene and one from MoS2. A graphite flake is used as a top gate and the stacks were aligned to prepatterned electrodes excluding the need for additional photolithography steps. Commercially available nail polish provides an ideal and easily implemented polymer for heated van der Waals assembly and transfer.

J.O.I. conceived the project. K.L.H., J.A.C., K.C., and R.M.S. exfoliated the materials and stacked the heterostructures. J.O.I. and K.L.H. made electrical measurements of the devices. T.T. and K.W. supplied the BN crystals. All authors have read and agreed to the published version of the manuscript.

Publicly available datasets were analyzed in this study. This data can be found here: https://github.com/islandlab-unlv/Heated-Assembly-and-Transfer-of-Van-der-Waals-Heterostructures-with-Common-Nail-Polis.

The authors would like to thank Israel Rebollo and Alexandre Champagne for sharing their early results using nail polish microstamps. 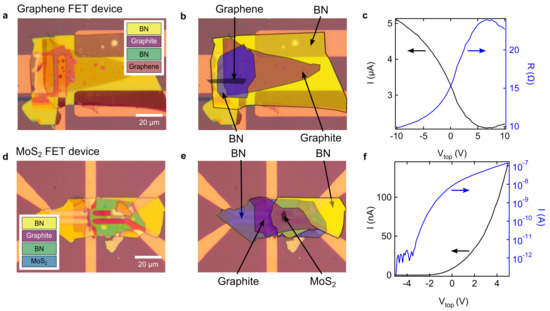 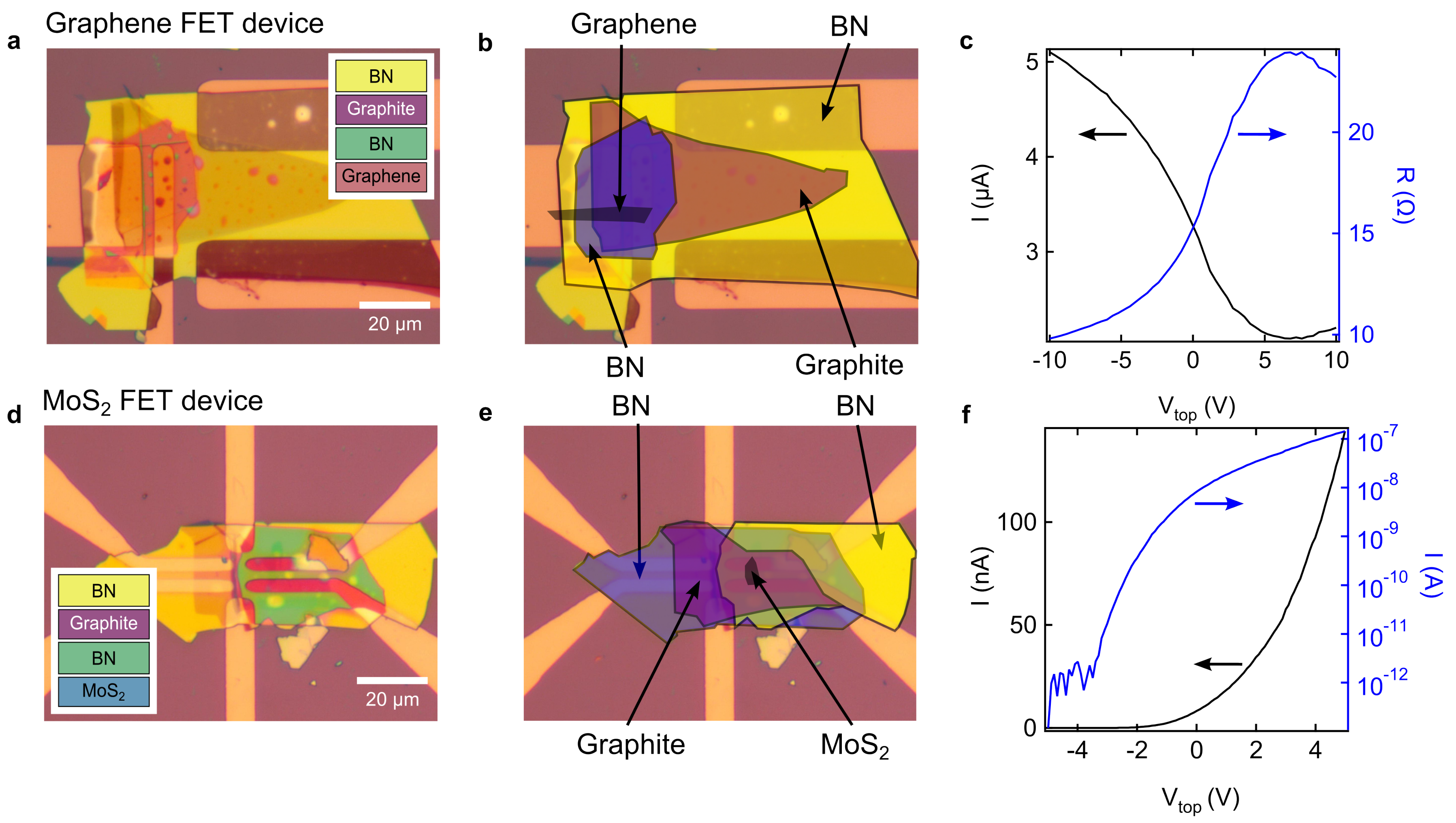