More Than Meets the Eye: How Black and Minority Ethnic Care-Leavers Construct and Make Sense of Their Identity
Previous Article in Journal

Reported Changes in Adolescent Psychosocial Functioning during the COVID-19 Outbreak

Background: A positive transition to adulthood entails developing the individual and social skills needed to cope with critical situations. The “My Health Diary” program was designed as a school-based and teacher-led intervention focusing on the active engagement of 12- to 13-year-old pre-adolescents. The study analyzes the role of several primary variables (psychological well-being, psychosomatic symptoms, health status), secondary variables (health-risk behaviors, prosocial behavior, academic success, physical and verbal aggression), and mediator variables of emotional and social skills in terms of empathic and social self-efficacy, and satisfaction with school. Methods: Sixty schools were involved, divided into control groups (N = 29) and intervention groups (N = 31). The program was administered only to the intervention group. Of the 2306 students at the baseline, 2078 were still involved at post-intervention 6 months later. Results: The program was not found to have significant effects on the primary outcome variables and most of the secondary variables. For the mediators, however, the association was stronger for the girls in the intervention group, and there was a statistically significant difference in the empathic skills shown by girls, who reported higher levels than boys. Conclusions: The program was found to have encouraging effects on some mediators and in enhancing socio-relational and emotional skills among pre-adolescents.
Keywords: school-based program; well-being; socio-emotional skills; pre-adolescence; health-promotion school-based program; well-being; socio-emotional skills; pre-adolescence; health-promotion

The “My Health Diary” program aims to enhance the empathic and social skills of pre-adolescents and their level of satisfaction with school. This enhancement could increase their subjective psychological well-being and health status, which could be associated with increased pro-social behavior and academic success, a less sedentary lifestyle, and a reduction in physical and verbal aggression, cigarette smoking, alcohol use, and unhealthy eating habits.
The part of the program designed specifically for pre-adolescents consists of five standardized interactive units: My Emotions; Beyond Stereotypes; Becoming Men and Women; Managing my Emotions; Others’ Emotions (Table 1). Each unit lasts between two to four hours and is conducted by the teachers. After the first version of the program was evaluated, two units were reviewed to focus more on the ability to manage emotions, and specific references to health-risk behaviors were deleted.
In addition, the program includes a narrative booklet for teens that tells the story of four same-age students dealing with common developmental tasks such as identity formation, relationships with peers, conflicts with parents, and physical changes at puberty, as well as a narrative booklet for parents that describes the experience of two families with teenage children and focuses on communication between parents and children and their relationship during adolescence [45,46].

The program employed a cascade training approach, in which 28 health professionals from two Italian regions (Piemonte and Veneto) participated in a two-day training course. They then trained middle school teachers in their area, selected the schools to enroll in the study, managed program implementation, administered study surveys, and organized courses for parents. A total of 75 teachers participated in the training courses, and 22 courses were organized for 315 parents. In this study, we focused on the program’s effect on the subjective well-being of the direct target, the pupils.
Sixty schools took part in the study during the year under investigation. The schools were divided at random into control groups (N = 29) and intervention groups (N = 31). The program was administered only to the intervention group. A total of 130 classes participated, 67 in the control groups and 63 in the intervention groups. Of the 2306 students at the baseline (T1), 2299 were still involved at post-intervention (T2), and 2078 subjects filled out the questionnaire both before and after the program (Figure 1). They were balanced by gender (51% male) and aged between 11 and 15 years (M = 12 years ± 42), while 94% were of Italian nationality and 45% were of high socio-economic status (SES). A high SES indicator means that both parents have at least a high school diploma, whereas a low SES means that both parents finished either primary or middle school.

The study was approved by the Ethics Committee of the Santa Croce e Carle Hospital of Cuneo, Italy, and officially registered on the US National Institutes of Health clinical trials website (for more information, see https://clinicaltrials.gov/ct2/show/NCT02683811).
In accordance with Italian law and the ethical code of the Italian Psychological Association, students and parents were informed of the aims and methods of the study and provided written consent.
In the classroom, trained health professionals (THPs) informed students for whom consent had been obtained that their answers would remain anonymous. Students were also informed that their participation was voluntary and they could drop out at any time. The THPs administered the questionnaires in each classroom while teachers were not present. Students completed identical self-reported questionnaires before the intervention (T1) and 6 months after it ended (T2). The questionnaire took approximately 30 min to fill out.
All questionnaires were identified by a self-generated code used to link the pre- and post-intervention surveys [47].

A descriptive analysis was carried out on the variables. The chi-squared test was used to compare proportions and analysis of variance (ANOVA) to compare means. Specifically, repeated-measures ANOVA was used to evaluate pre- and post-intervention changes by gender and between the intervention and the control groups. Analyses were performed using IBM SPSS (version 25.0, Armonk, NY, USA).

School is an excellent setting for implementing programs promoting young people’s development. It plays an educational role and is responsible for providing support to girls and boys so they are more capable of consciously addressing their life choices and coping adequately with the different developmental tasks they face while growing up.
The most promising interventions seem to be those that promote boys’ and girls’ life-skills and socio-emotional skills [14,17,23,29,92,93] and that use interactive methods to transmit content [87,94,95]. Overall, the “My Health Diary” program is innovative on the Italian scene as well as at the European level for this specific age group, given the effort made to evaluate the intervention and bring together a network of professionals (health workers, teachers, etc.) who work with pre-adolescents in the school setting.
The study’s findings suggest several areas for future work. First, the “My Health Diary” program, created as a universal health promotion and prevention intervention for pre-adolescents from normative samples, could also be implemented as a selective prevention intervention for a population of pre-adolescents at psycho-social risk with fewer emotional and social skills. It would be equally important to extend the program to adolescents slightly older than the original target population, as during this period of life some attitudes and behaviors adopted by young people can expose them to a greater risk of jeopardizing their health and their psychological and social well-being both in the short and long term [10,34,37,88].

This project was funded by the Italian Ministry of Health, Center for Disease Control and Prevention (CCM) Program 2011 (Grant Number J19E11002100001) and the evaluation office of the Piedmont Region—Prevention Sector. 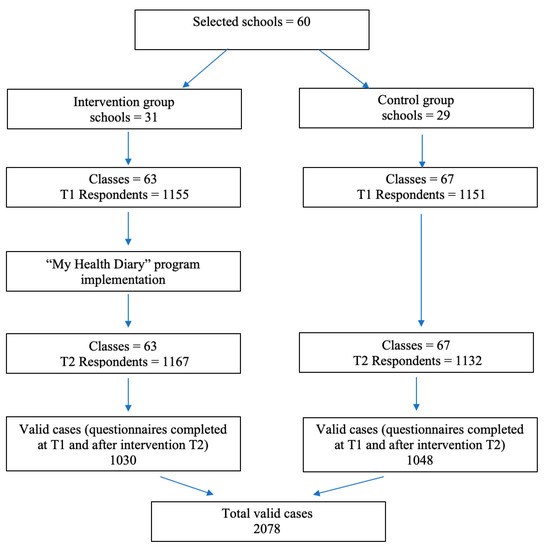 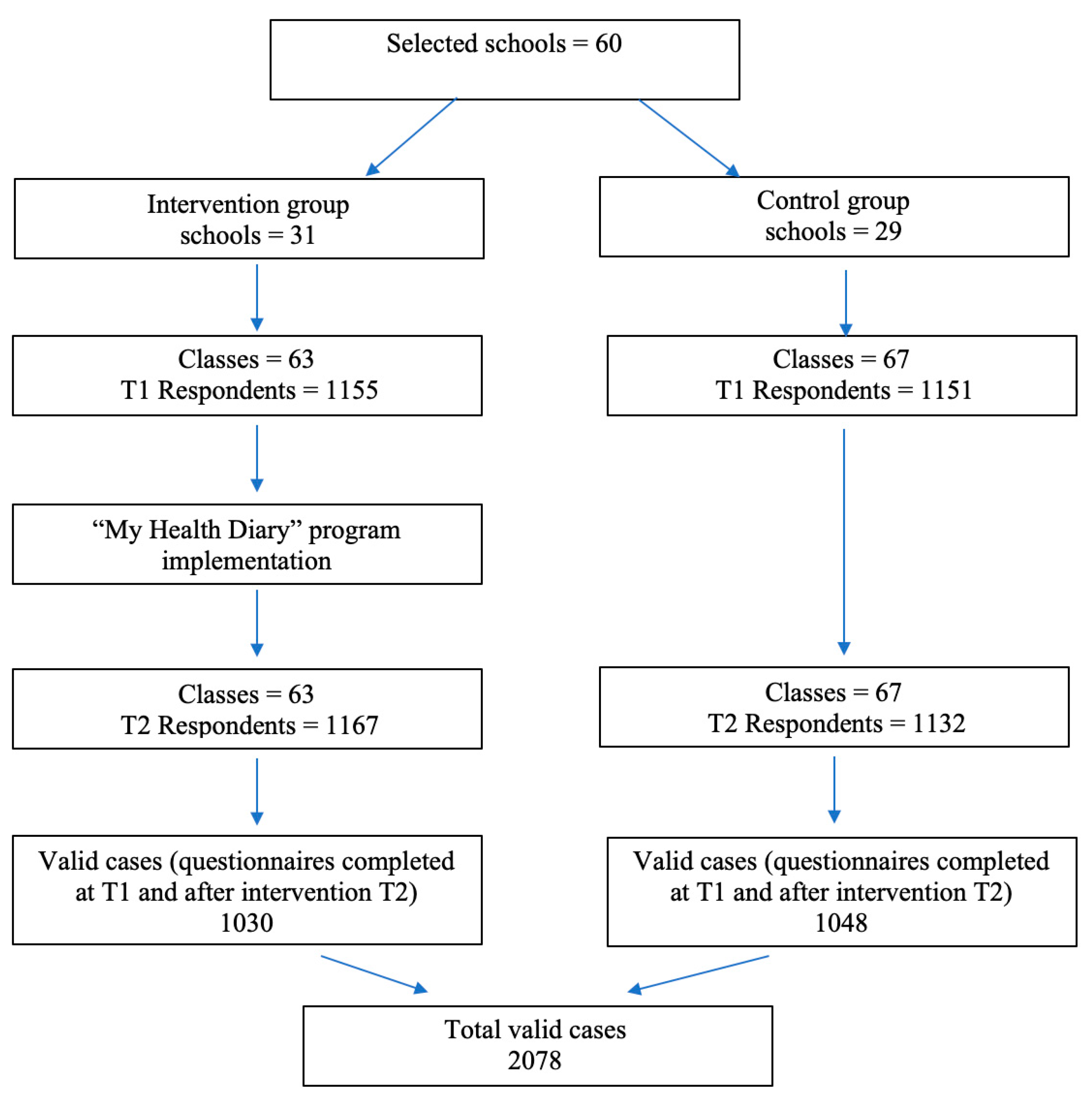