Conservation: A New Open Access Journal for Rapid Dissemination of the Transdisciplinary Dimensions of Biodiversity Conservation

Habitat modification is a major factor in the decline of reptile populations. The degree of the decline has been shown to be directly related to the intensity of habitat modification. Farming practices and urbanization are just two of the factors involved indicating that the development of practices that minimize or cancel anthropogenic impacts is urgently needed to prevent further declines. This requires knowledge of population ecology of reptiles in both disturbed and pristine habitats. In this paper, we describe aspects of green lizard (Lacerta bilineata) population ecology in a forest–pasture relatively pristine mosaic habitat in central Italy and a fragmented habitat in western France. In Italy, habitat niche overlap was very high between males and females but very low between males and juveniles. For male and female abundances, general linear models showed that the adult abundances increased with the increase of Rubus bushes, whereas juvenile abundance increased with the increase of Spartium bushes. Contingency table analysis showed that juveniles were also much more frequently observed in grasslands than adults of either sexes. The observed ontogenetic structural niche pattern was likely due to intraspecific competition avoidance, competition interference, and cannibalism. The persistence of the same patterns across years demonstrates a temporal stability of the ontogenetic structural niche pattern. Over the length of the study period, population densities were stable in the Italian population, but densities were much higher by around five times in the hedgerow in the fragmented habitat in France. In the hedgerow, monthly lizard presence was uneven, with the greatest number of sightings in June and July. Overall, our study provided no support for the notion that lizard abundance/density should be lower in modified compared to unmodified habitats, and clearly revealed that a careful management of the hedgerows is crucial for the conservation of this lizard species in agro-forest ecosystems. View Full-Text
Keywords: lacertidae; habitat selection; density; France; Italy; niche characteristics; fragmentation lacertidae; habitat selection; density; France; Italy; niche characteristics; fragmentation
►▼ Show Figures 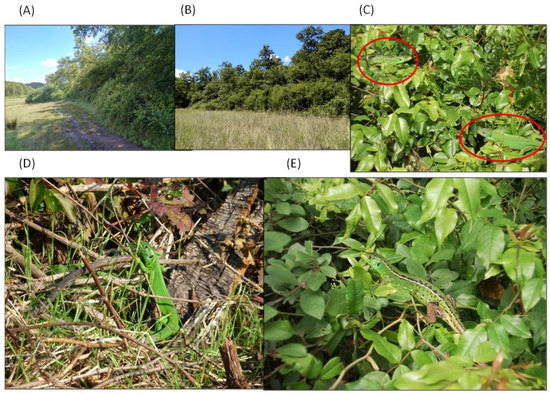