Assessments of Bacterial Community Shifts in Sediments along the Headwaters of São Francisco River, Brazil
Previous Article in Journal

Small Scale Fisheries, Dolphins and Societal Challenges: A Case Study in the City of Volos, Greece

Existing literature on dolphin-fisheries interaction focused on Greece reveals both an undeveloped area for research, but also a lack of relevant data in this field. Although imperative, relevant research has been slow on innovation and cooperation among universities, official bureaus, and NGOs that are obliged to work together as European and national laws dictate. Most of the research in this new field focuses on the interaction between marine mammals and local fisheries, suggesting that this relationship may be problematic for both parties since the former are being treated (at least occasionally) with brutality, while the latter try to deal with economic loss. Dolphins and fishermen operate within the same ecological niches for their survival, the main area of conflict being nutritious fish. Anthropological research on ethnic identity has long dealt with antagonistic relationships over resources between adjacent groups of people. Marine biologists’ research in Greece focuses on the human factor, and some of its shortcomings may well be seen as the result of limited, or an absence of, training in social sciences. This article attempts to draw from anthropological theory to shed light on a particular symbiosis between humans and dolphins. Multidisciplinary approaches gain ground in a wide range of research interests and seem to be fruitful in terms of theoretical and practical results.
Keywords: Volos; small scale fisheries; dolphins Volos; small scale fisheries; dolphins

A total of 34 questionnaires were collected from small-scale fishermen in the harbor of the city of Volos (Pagasitikos Gulf, central Greece—Figure 1). A semi-structured interview was based on ten open-ended questions, which are listed below. These questions guided the conversation and allowed the interviewers to ensure flow, but did not limit the interviewees’ answers. The discussion began after a short introduction on the scope of the research and the ethics involved, clarifying that anonymity is ensured. The interviewers kept notes on all pieces of information being communicated, the interviewees responding at their own pace and sharing information on fishing gear voluntarily that was then cross-checked with the official data provided by the Periphery.
The first question is meant to open the discussion, make sure that the interviewees were still active in the sector, and reveal perceptions of the sea reflecting on the local classification system. Fishers see themselves and claim to be seen by others as a distinct group within the local and national socioeconomic system. The vast majority of the interviewees attested to the family tradition of the sector, explaining that their love for, fear of, and respect toward the sea is based on a particular enculturation process within their family unit. Most joined the sector at a young age and along with close family members. The second question focused on the difficulties local fisheries meet, revealing patterns validated by relevant bibliography in terms of depredation and the destruction of fishing gear. However, it also provided insights in the local experience, as depredation was suggested to be becoming the main issue of concern in the last fifteen years, a period which coincides with the recent economic depression. The fourth question opted for more detailed answers on the kind of support fisheries have, or should have. Compensations, or the lack of, revealed a perfect consensus.
There was unanimity among all interviewees that the state should help the sector under these strained circumstances. The fifth question aimed at revealing perceptions of the self in contrast to neighbor agricultural areas that constitute the backbone of the Greek economy. A definition of the self by opposition to the “other” was not based on occupation but rather on the diverse support of the state toward these two economic activities. Given the economic context, question 6 was meant to test if overfishing that was mentioned in earlier discussions is a coping mechanism for income loss or a practice that links to lack of environmental awareness.
Question seven focused on the relationship between fishers and marine mammals, with emphasis put on dolphins by the interviewers. Fishers claimed that depredation is a great issue of concern since damages are most common nowadays and the relevant costs are just unsustainable. Following almost naturally, the eighth question aimed at revealing measures being employed against depredation. The last two questions were set to explore any possible future cooperation toward culturally compatible solutions. Fishers extended invitations to the interviewers.
The vessels operated primarily gill nets with a variety of target species. The answers of the questionnaires were analyzed regarding the negative impact of marine mammals on nets and fish depredation. Negative impacts were focused on the usage of acoustic pingers, fishing ground, time of day, and depth of nets soaking.
A contigency ad-hoc analysis was performed on the frequency values [36] with respect to the collected responses (Fisher exact test). For underlying the value of the responses, a Principal component analysis was assessed using Singular Value Decomposition (SVD) method, and all variables were scaled so that they would be equally important (variance = 1) [37]. All analyses were implemented in R v 3.6.0 software [38].

Analysis shows primarily that acoustic pingers did not benefit depredation or net damage, suggesting that the usage of this apparatus was useless. Paired comparisons for depth (Figure 2) were statistically significant (p < 0.05), meaning that both depredation and net damage frequency were higher in shallower waters (<200 m). More on spatial impact, the fishing ground was significantly correlated with depredation possibly due to a complex association between target species and dolphins’ prey-favorites (Figure 2). However, there was a different impact regarding the time of day of net soaking. Net damage was always significant regardless of the time, but afternoon hours of net soaking were highly correlated with the negative impacts of depredation. Overall, Principal Component Analyses (Figure 3) revealed that acoustic pingers were not perceived to play a role in the rate of catch-loss, and that the combination of fishing ground and time of the day may be an important factor.
Interviews revealed that the type of fishing gear plays a pivotal role in the interactions with cetaceans. Compared to hook and lines gear gillnets were identified as the most affected ones. Another factor frequently indicated was the fishing ground; namely, fishing within the Gulf or in the open sea. 80% of the interviewees believed that chances to conflict with dolphins are higher when fishing nearshore rather than offshore. Moreover, a few fishermen (<5%) mentioned that weather conditions or the moon cycle may have some impact; since such questions were not included in our methodology, relevant data was omitted.
Interestingly, a rather big part of the fishers (>90%) provided suggestions about how to solve the problem of cetacean–fisheries interactions. These varied from measures to benefit fisheries such as financial compensation to the extreme of reducing local cetacean populations. On the other hand, measures that could benefit cetaceans comprised mainly of the need to find alternative cetacean-friendly fishing methods. To this extent, it was also emphasized that environmental education should be offered by the local university.

These data could be essential in improving human-cetacean interactions through the implementation of appropriate management plans. Fishers’ willingness to cooperate and contribute in the development of local-specific management measures useful to mitigate the controversial dolphins-fisheries interactions is extremely promising. However, it is true that some interactions may lead to serious conservation issues for cetaceans and at the same time result in severe economic loss for fishers. Thus, new technological developments and an environmentally friendly political agenda could help minimize socio-economic and environmental costs.
Interdisciplinary approaches help shed light on the complexity of human-cetaceans’ interaction and the way such a relationship is shaped and reshaped by local parameters. Environmental anthropology focuses on local perceptions of the environment and relevant practices [60]. Qualitative data on ethnoecology can complement quantitative approaches provided by marine biologists toward a new balance between people’s needs and environmental conservation. Although the scale of the issue at hand dictates cooperation at the global level, case studies can provide all interested parts with those local details that play a crucial role in rendering any future interventions successful. Sustainability in this case should be the outcome of an uninterrupted cooperation among experts, local people, and the government. Future research on local realities could facilitate said interactions.

Data available on request due to restrictions.

Authors would like to thank Niki Mantzafleri from the Dept. of Fisheries (Directorate for Veterinary Service—Magnesia Prefecture, Greece), as she was our contact with the fishers of the study area. 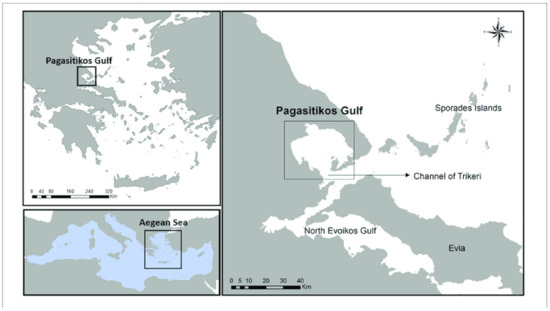 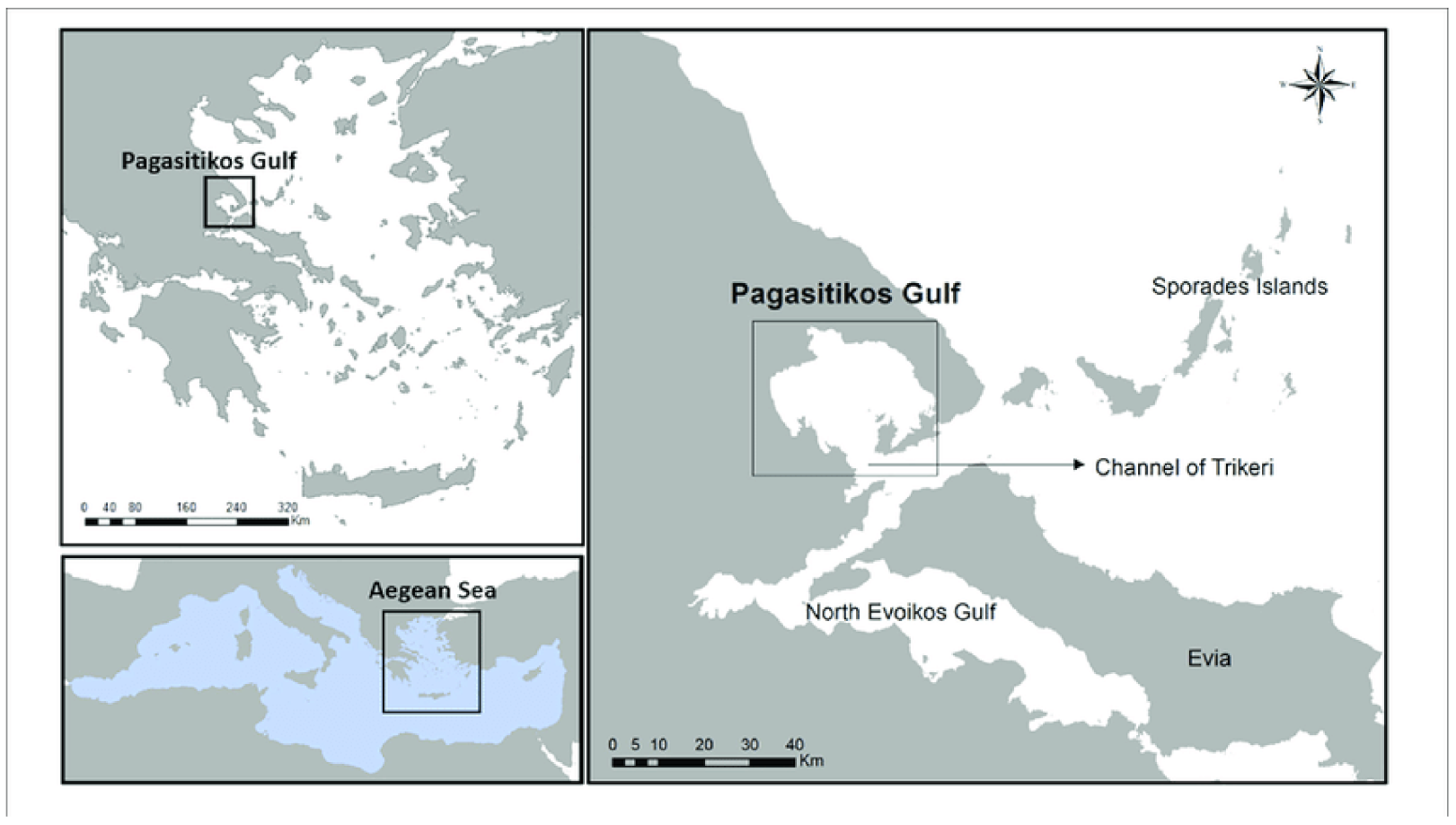 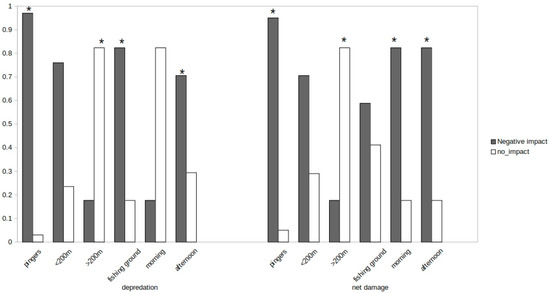 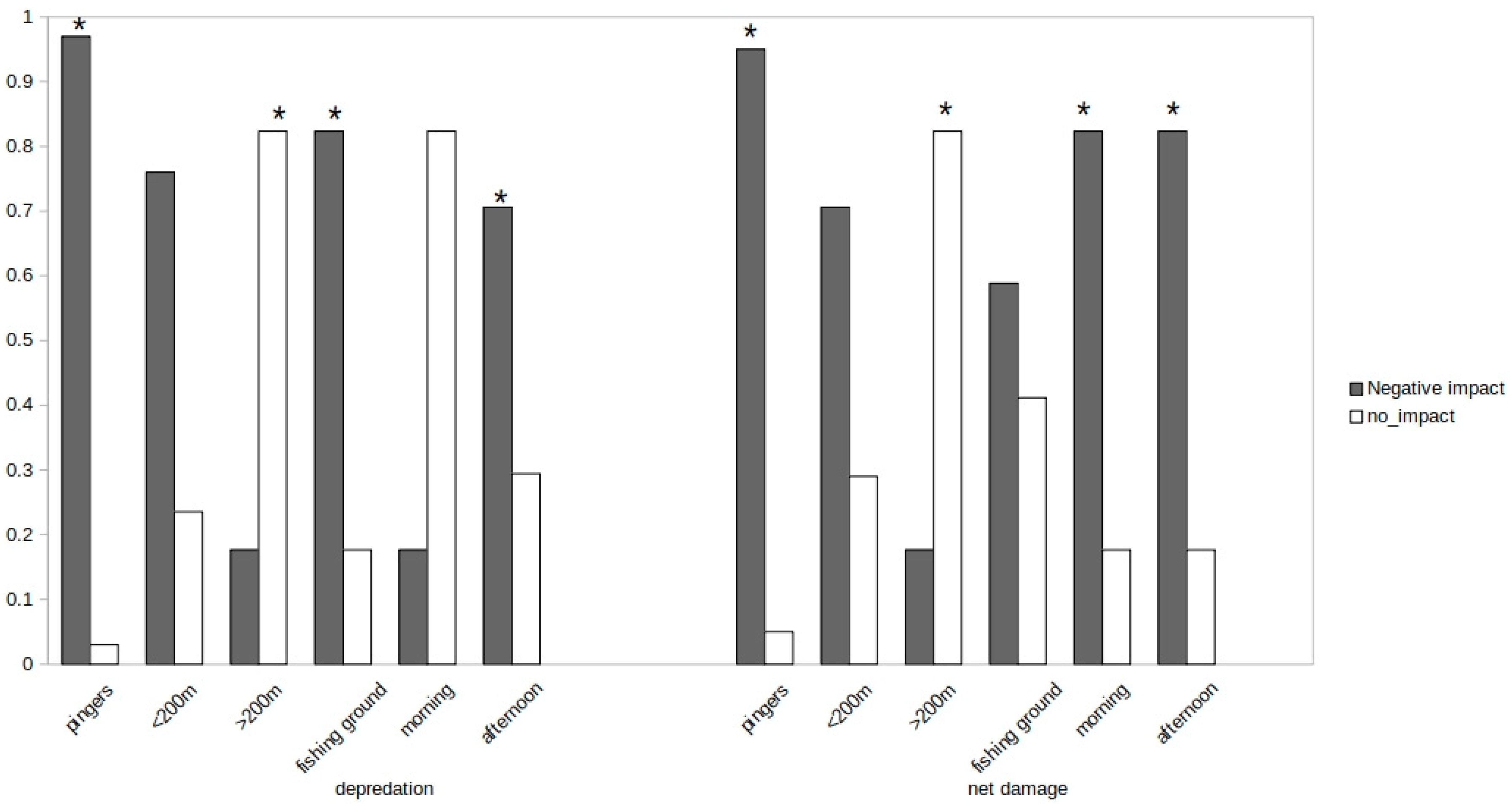 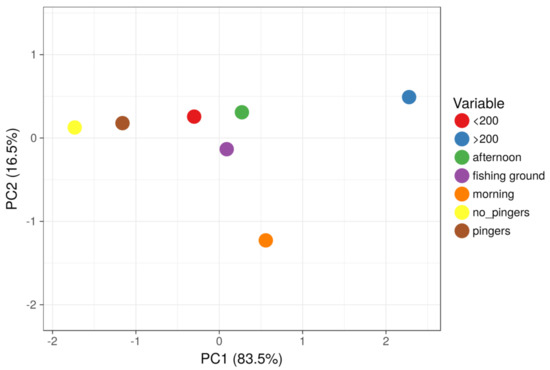 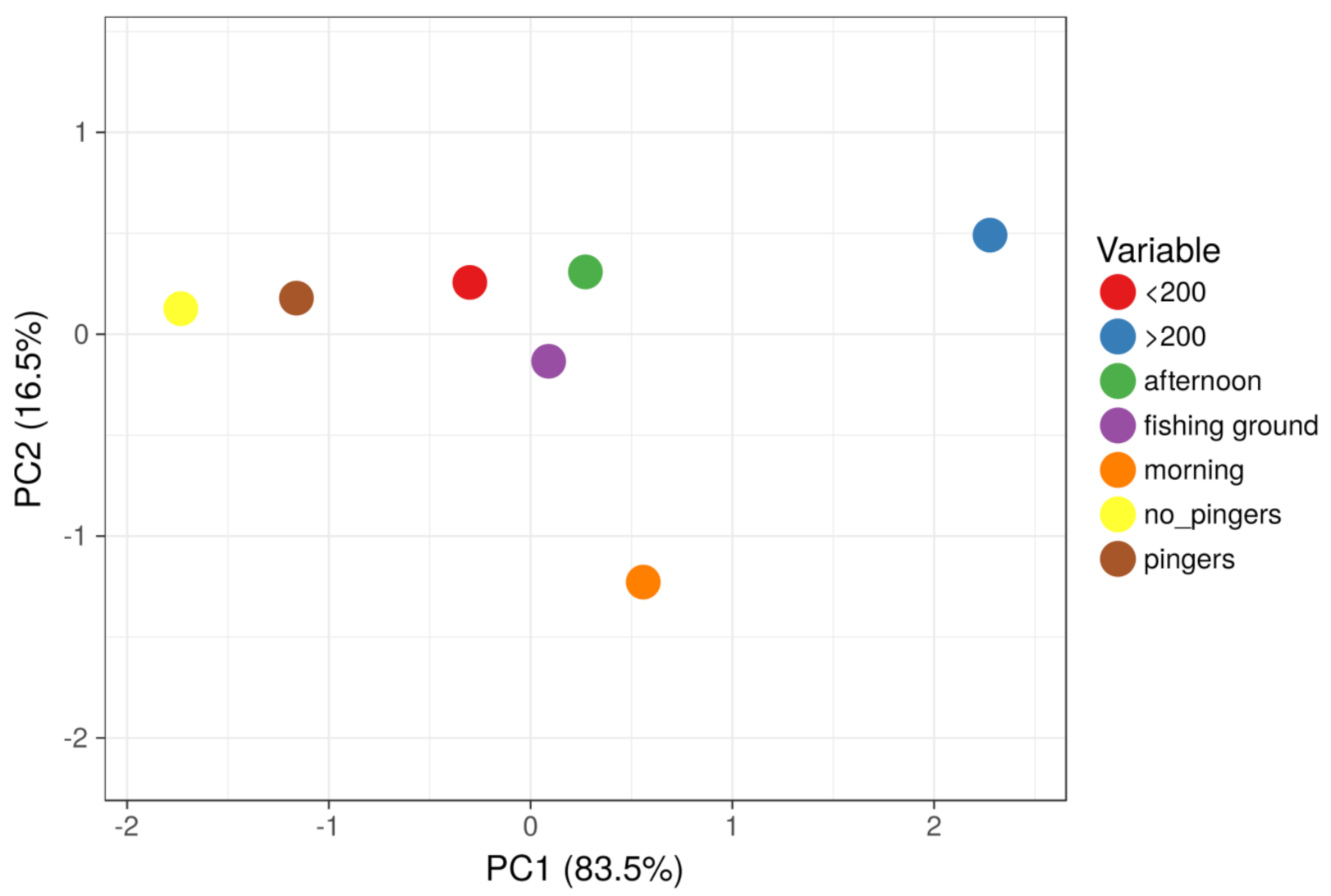