One widely recognized portal which provides numerical weather prediction forecasts is “The Observing System Research and Predictability Experiment” (THORPEX) Interactive Grand Global Ensemble (TIGGE), an initiative of WMO project. This data portal provides forecasts from 1 to 16 days (2 weeks in advance) for many variables such as rainfall, winds, geopotential height, temperature, and relative humidity. These weather forecasting centers have delivered near-real-time (with a delay of 48 hours) ensemble prediction system data to three TIGGE data archives since October 2006. This study is based on six years (2008–2013) of daily rainfall data by utilizing output from six centers, namely the European Centre for Medium-Range Weather Forecasts, the National Centre for Environmental Prediction, the Center for Weather Forecast and Climatic Studies, the China Meteorological Agency, the Canadian Meteorological Centre, and the United Kingdom Meteorological Office, and make consensus forecasts of up to 10 days lead time by utilizing the multimodal multilinear regression technique. The prediction is made over the Indian subcontinent, including the Indian Ocean. TRMM3B42 daily rainfall is used as the benchmark to construct the multimodel superensemble (SE) rainfall forecasts. Based on statistical ability ratings, the SE offers a better near-real-time forecast than any single model. On the one hand, the model from the European Centre for Medium-Range Weather Forecasting and the UK Met Office does this more reliably over the Indian domain. In a case of Indian monsoon onset, 05 June 2014, SE carries the lowest RMSE of 8.5 mm and highest correlation of 0.49 among six member models. Overall, the performance of SE remains better than any individual member model from day 1 to day 10. View Full-Text
Keywords: ensemble; superensemble; TIGGE global models; precipitation ensemble; superensemble; TIGGE global models; precipitation
►▼ Show Figures 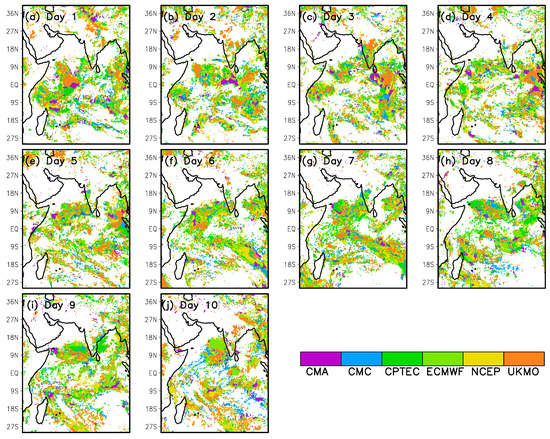