The field of nanomagnetics where very small-scale structures such as ultrathin (few atomic layer) films of ferromagnetic material are involved has been of great interest for the last few decades [1]. Magnetic recording media [2] and sensors and actuators based on spintronics [3,4,5] are the predominant applications for magnetic thin films and multilayers. Remarkable phenomena such as exchange bias at ferromagnetic/antiferromagnetic interfaces [6,7], perpendicular magnetic anisotropy (PMA) in thin films [8], and giant and tunnel magnetoresistance [9,10] are currently used in spintronic applications. Recent works reveal that oxides and, more specifically, transition metal/oxide ultrathin films and oxide interfaces are a central component in the development of modern electronic system concepts [11]. Since it has been observed in a wide variety of amorphous or crystalline oxides, including AlOx, MgO, TaOx, CoNiO, etc., PMA has been found to be quite common at magnetic metal/oxide interfaces [8,12,13,14,15,16].
Cobalt and nickel are two of the three elements (iron being the third) that are strongly ferromagnetic at ambient temperature. Co, Ni, and NiCo thin films are important for both, basic and applied, research [17,18,19]. NiO and NiCoO have both a simple slightly distorted NaCl-type structure and are classified in the categories of anti-ferromagnetic materials. At room temperature, NiCoO has been used as an AFM material to induce an effective exchange bias (EB) [20]. Exchange bias refers to the zero-field axis shift of the hysteresis loop. It was discovered in surface-oxidized Co particles by Meiklejohn in 1956 [21]. In order to research EB, often ferromagnetic/antiferromagnetic (FM/AFM) bilayers have been investigated due to their technical significance and probably due to their convenient form. When the FM/AFM bilayer is cooled through the Néel temperature of the AFM layer under an external magnetic field, the exchange interaction at the interface of ferromagnetic (FM) and antiferromagnetic (AFM) layers produces unidirectional anisotropy [7,22,23]. Recently, Spadaro et al. synthesized films of magnetic Ni/NiO core–shell nanoparticles to obtain large EB. By varying the thickness of the shell, they have the ability to adjust the EB effect [24].
By following an alternative procedure, one may fabricate metal/metal oxide multilayer films, namely Ni/NiO [25,26,27,28] and Co/CoO [29], using only one sputtering head. The method uses natural oxidization, which results in an ultrathin oxide layer of constant thickness (of about 1.4 ± 0.2 nm) throughout the whole multilayer film. We were able to fabricate heterostructure multilayers with excellent sequencing using this simple and cost-effective procedure. The magnetic and structural properties of these multilayers were previously investigated after mild thermal annealing [30,31]. Both systems showed a small degradation in multilayer quality after thermal annealing. In Ni/NiO multilayers, the PMA is enhanced to a great extent due to partial recrystallization of NiO layers after annealing [30]. The Co/CoO films exhibit a small increase in coercivity without considerable changes in their anisotropy taking place [31].
In the current work, the correlation between magnetic anisotropy and thermal annealing of Ni0.9Co0.1/NiCoO multilayers is investigated. All the samples were prepared at relatively low argon pressure (2 × 10−3 mbar) in order to minimize roughness at the NiCo and NiCoO interfaces. This is confirmed by structural characterization using X-ray reflectivity (XRR). The magnetic characterization showed that the samples exhibit in-plane anisotropy with some of them showing the phenomenon of inverted hysteresis [32] in the loops for out-of-plane magnetic field. All the multilayers demonstrate some positive interface anisotropy. Last, but not least, a spin reorientation transition (SRT), exchange bias and strong coercivity enhancement were observed with the field applied in- and out-of-plane at low temperatures after field cooling.

Thin NiCo alloy films were deposited by radio frequency (rf) magnetron sputtering (at 30 W) in a vacuum chamber with a base pressure of 3 × 10−7 mbar. The samples were grown on the native oxide of Si(100) wafers and corning glass under low Ar pressure of 2 × 10−3 mbar. The sputtering gas was pure Argon (99.999 at%). For the formation of the NiCo alloy, a Co foil with small randomly distributed holes was placed on a Ni foil which was placed on the magnetron’s head. The alloy composition can be adjusted by changing the number of holes, for example, see [33]. The composition of the samples was determined by energy-dispersive X-ray spectroscopy (EDS). This system, which is integrated into a scanning electron microscopy (SEM), has detected only cobalt, nickel, and oxygen in the multilayer films, with no trace of nitrogen. After each NiCo layer was deposited, air was allowed to flow inside the chamber for about 1 min through a fine valve at a partial pressure of about 2.5 × 10−3 mbar. Another NiCo layer was deposited on top of it and again oxidized. This sequence was repeated until the desired number of multilayer periods was achieved. Using this technique, multilayered films [NiCo (x: 1–6.8 nm)/NiCoO (1.4 nm)] × N with N periods ranging from 6 to 21 and total film thicknesses of about 50 nm were created, as usually thicker multilayers show a larger density of defects [26]. A pre-calibrated quartz balance system (Inficon XTM/2) was used to measure the thickness of the films in situ with an accuracy of 0.1 nm. The deposition rate was kept constant at 0.08 nm/s.
X-ray reflectivity (XRR) measurements were carried out in a Bede D1 X-ray diffractometer equipped with a Cu X-ray source operated at 35 mA and 50 kV, a Göbel mirror, and a 2-bounce-crystal on the incidence side. Furthermore, a circular mask (5 mm) as well as an incidence and a detector slit (both 0.5 mm) were used. The X-rays were detected with a Bede EDRc X-ray detector. The morphology of a NiCo/NiCoO multilayer was probed by atomic force microscopy (AFM) performed with the help of a multimode microscope with a Nanoscope IIIa controller and a 120 × 120 μm magnet—free scanner (Model AS-130VMF) developed by Digital Instruments. The microscope was operated in the non-contact (tapping) mode [34].
The magnetic characterization of the multilayers was carried out using a home-made magneto-optic Kerr effect (MOKE) magnetometer [35] to record hysteresis loops with the applied field parallel (longitudinal-) and perpendicular to the film plane (polar-geometry) at room temperature (R.T.). In the temperature range of 4–300 K, a selected sample was measured via a Quantum Design SQUID VSM magnetometer. The measurement protocol included initially cooling down in field, setting the temperature value, and then the magnetic hysteresis loop runs from +maximum saturation field to -maximum field and back to +maximum field. In such a way, we exclude any experimental factor that can influence the magnetization reversal.

In Figure 1, X-ray reflectivity (XRR) patterns for two NiCo/NiCoO multilayers are plotted. The number N of multilayer periods are 10 and 17, respectively. Both patterns consist of Bragg peaks numbered as n = 1, 2, etc. These are the peaks with the multilayer period Λ as the scattering unit rather than the individual crystallographic planes. Their presence confirms the formation of multilayers.
Using the modified Bragg Equation (1) [36],
2t(sin θn+1 − sin θn) = λ
where θn+1 and θn are the positions of two successive Kiessig fringes, we can determine the total film thickness t. The thickness t of the multilayers is indeed ~50–52 nm. The fitting of the data is done using the GenX software package [37]. GenX fittings allow us to determine the scattering length density profile of the film stack, relating to individual layer thicknesses and roughnesses. In our fitting process, the NiCoO thickness was found to be 1.4 ± 0.2 nm. A detailed XRR study has revealed that the thickness of the oxide layer is almost constant and reproducible [27]. The multilayers are structurally and magnetically repeatable. This is due to the fact that both Ni and Co, unlike Fe, form protective oxide layers [26]. We have found that the multilayer consisting of N = 10 repetitions has a period of Λ = 5.0 nm, while the one with N = 17 repetitions has Λ = 3.0 nm (Figure 1). Both multilayers show an intense first Bragg peak. Many Kiessig fringes appear between the Bragg peaks and extend far out in the two-theta plots showing a very small film roughness [38]. In the simulations of the experimental data, the roughness profile is implemented as a sinusoidal modulation of the layer thickness. The root-mean-square (RMS) roughness values of NiCo and NiCoO layers are under 1 nm (0.57 and 0.75 nm, respectively for the sample with 17 repetitions, and 0.56 and 0.56 nm, respectively for the sample with 10 repetitions).
Finally, for completeness sake, in Figure 2 we present indicatively the AFM image of the surface of a multilayer with the thickest NiCo layers. One may see nanograins of about 10 nm large, quite homogeneous in terms of size. The RMS roughness is 0.45 nm.

In this work, we study the effects of Co doping on the magnetic properties of Ni/NiO multilayers. In the as-deposited state, the samples show an easy-plane behavior, typically expected for polycrystalline magnetic thin films. Annealing at temperatures up to 250 °C results in a relatively strong tendency for perpendicular magnetic anisotropy. For a multilayer with tCoNi = 2.5 nm in the as-deposited state we have recorded temperature-dependent hysteresis loops. We observed a spin reorientation transition at low temperatures. After field cooling at 4 K the sample shows a substantial exchange field, which in the out-of-plane direction exceeds 700 Oe. The coexistence of PMA and EB renders this system interesting for perpendicular exchange bias applications and promotes further investigations.

We thank V. Karoutsos for the AFM images. 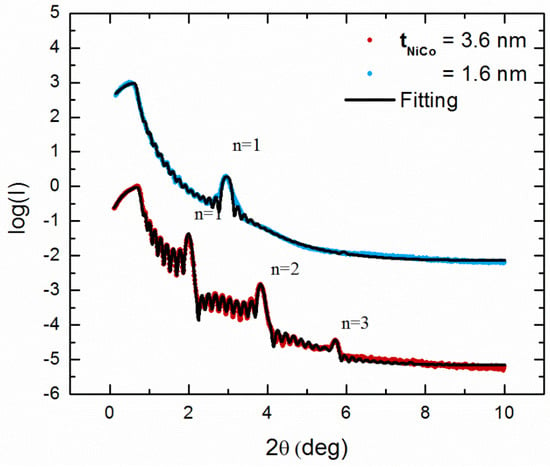 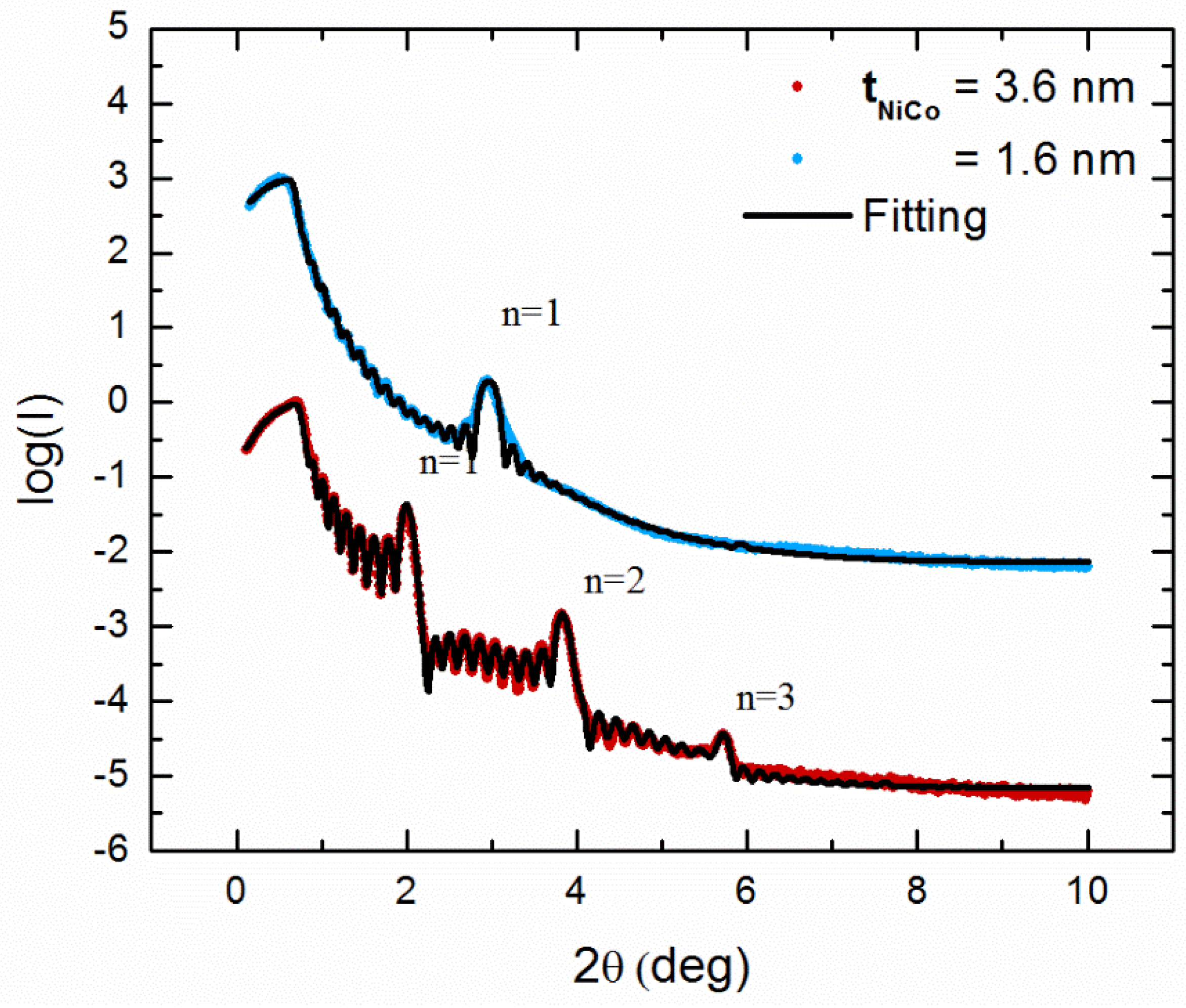 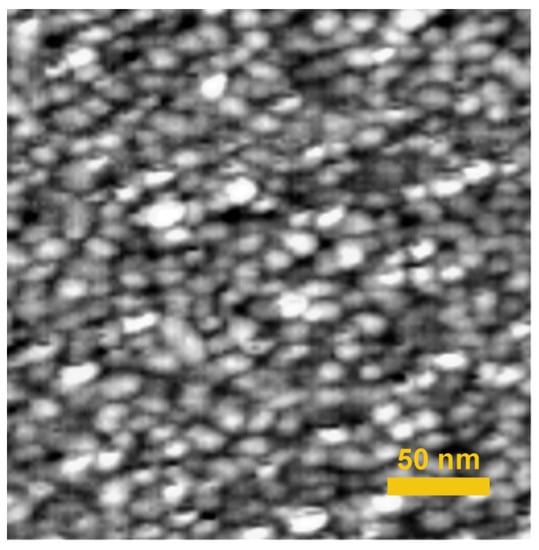 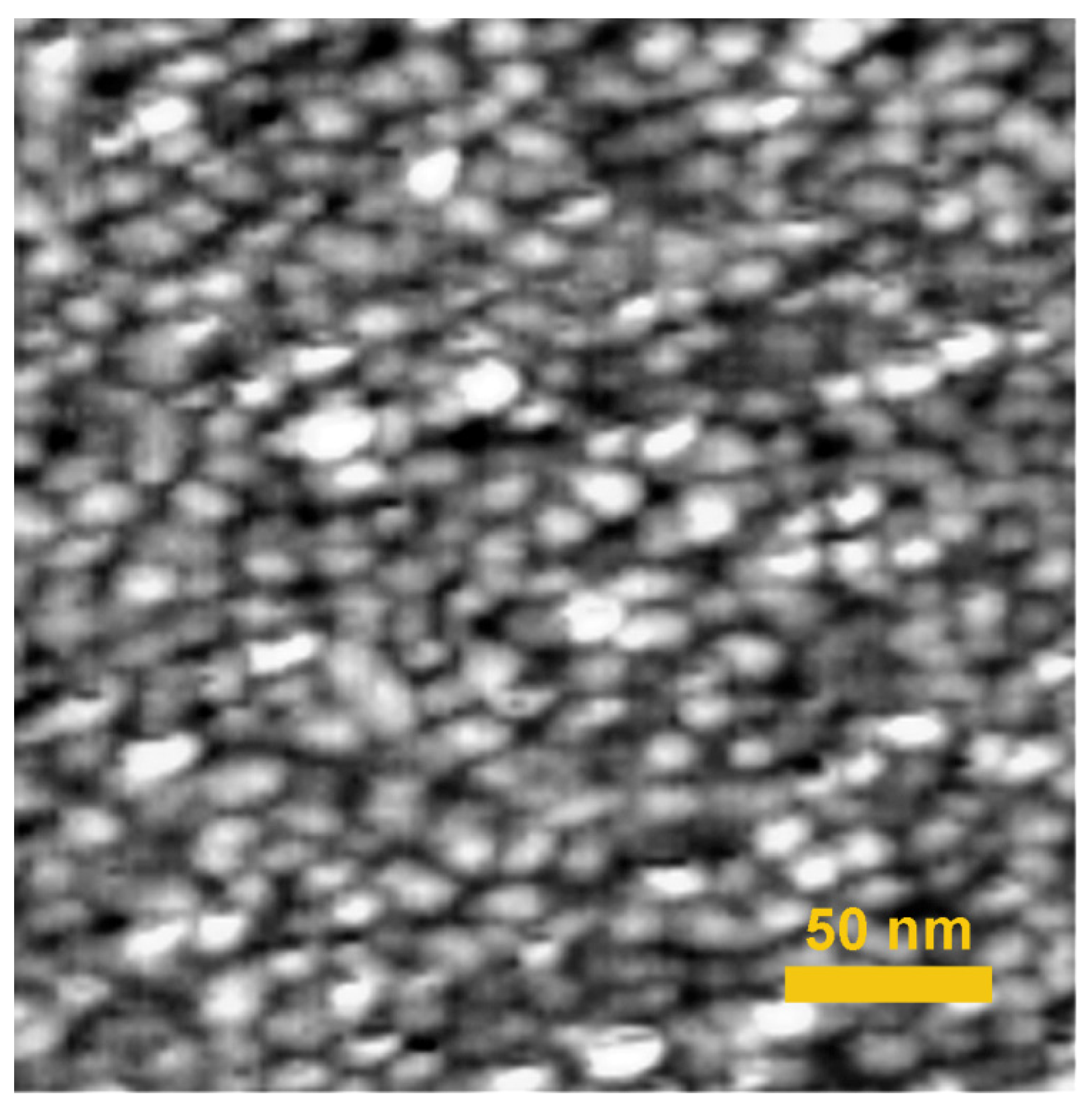 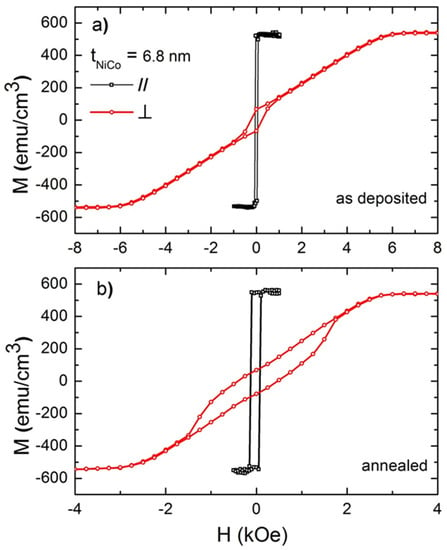 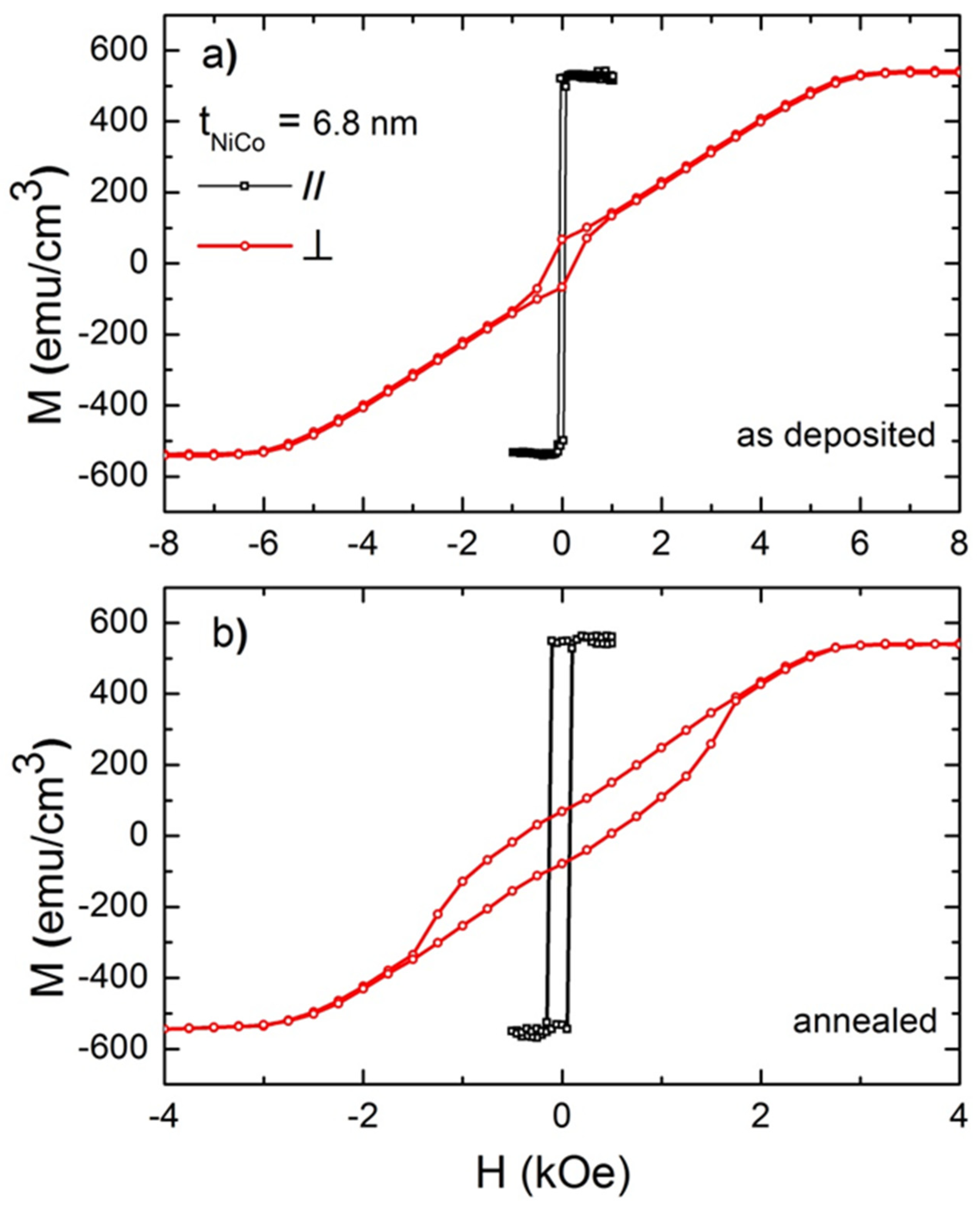 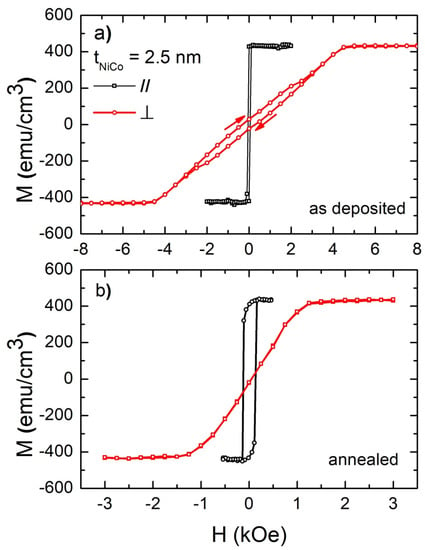 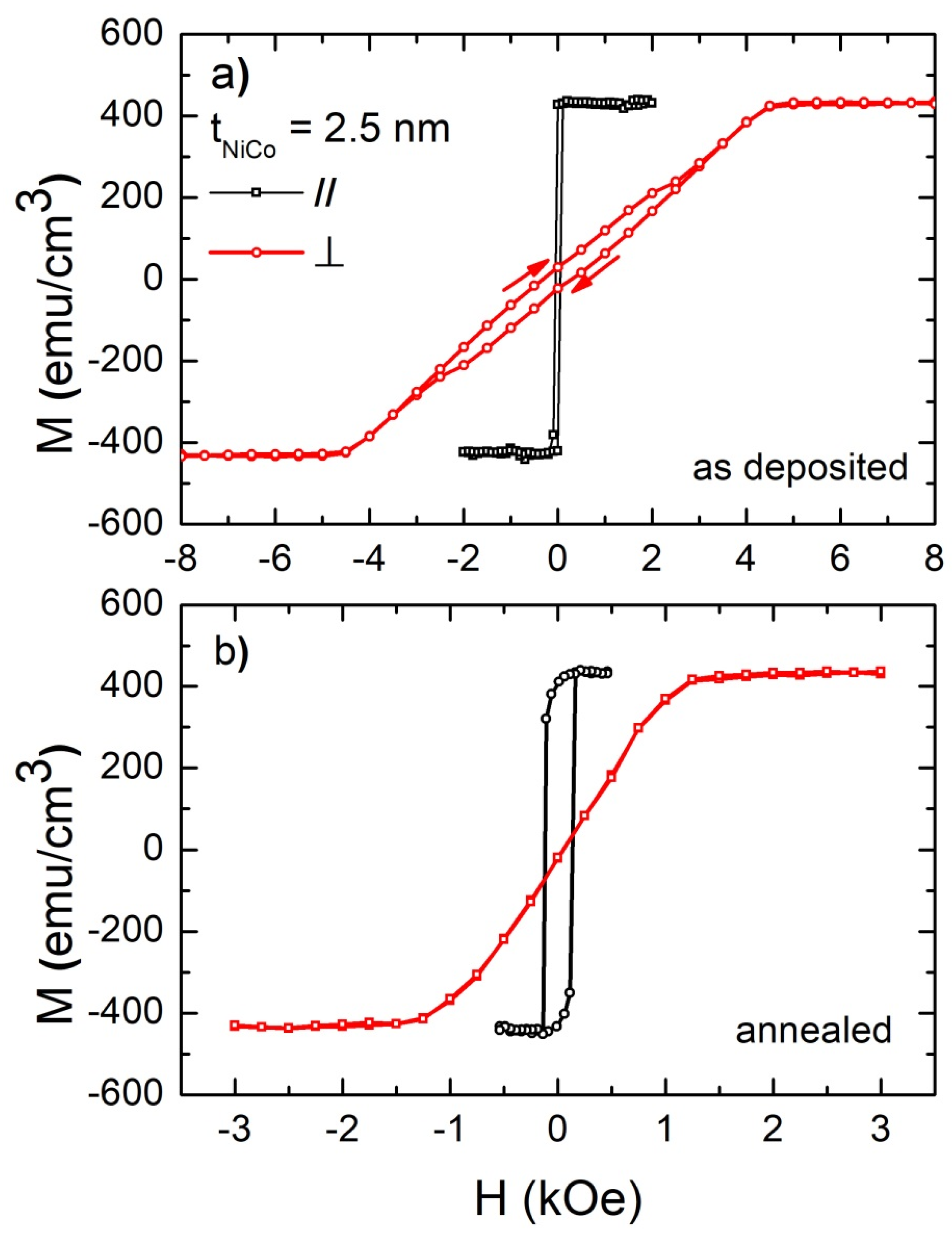 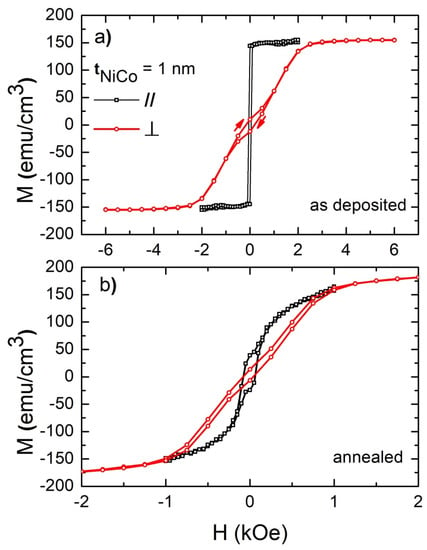 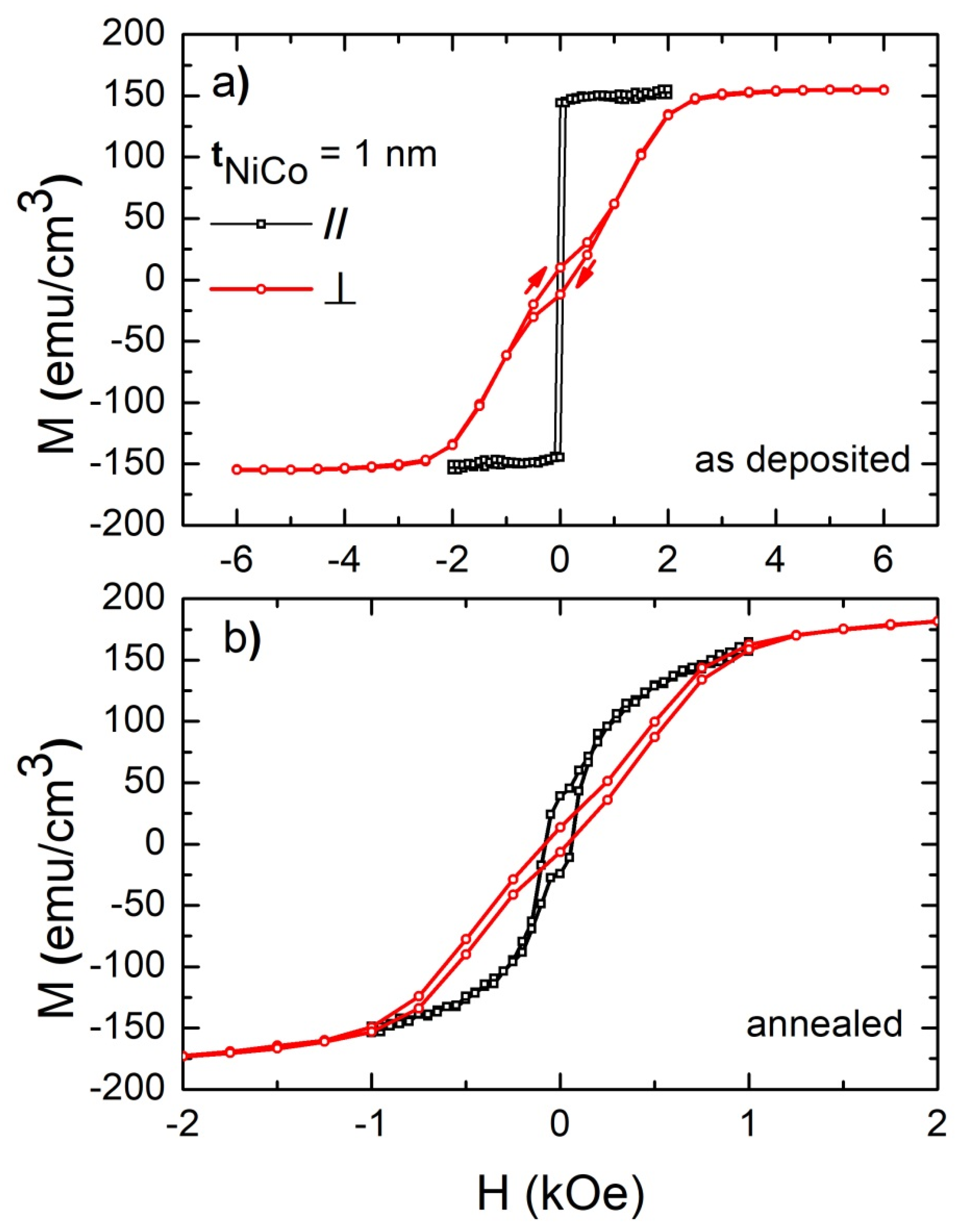 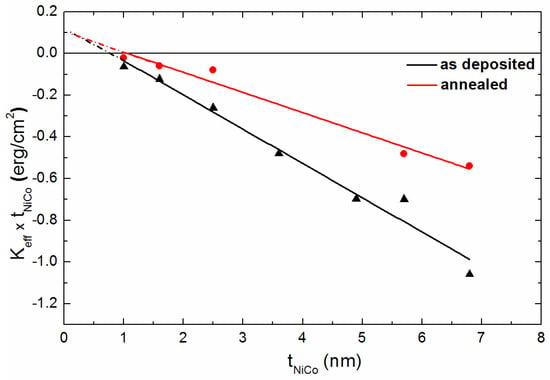 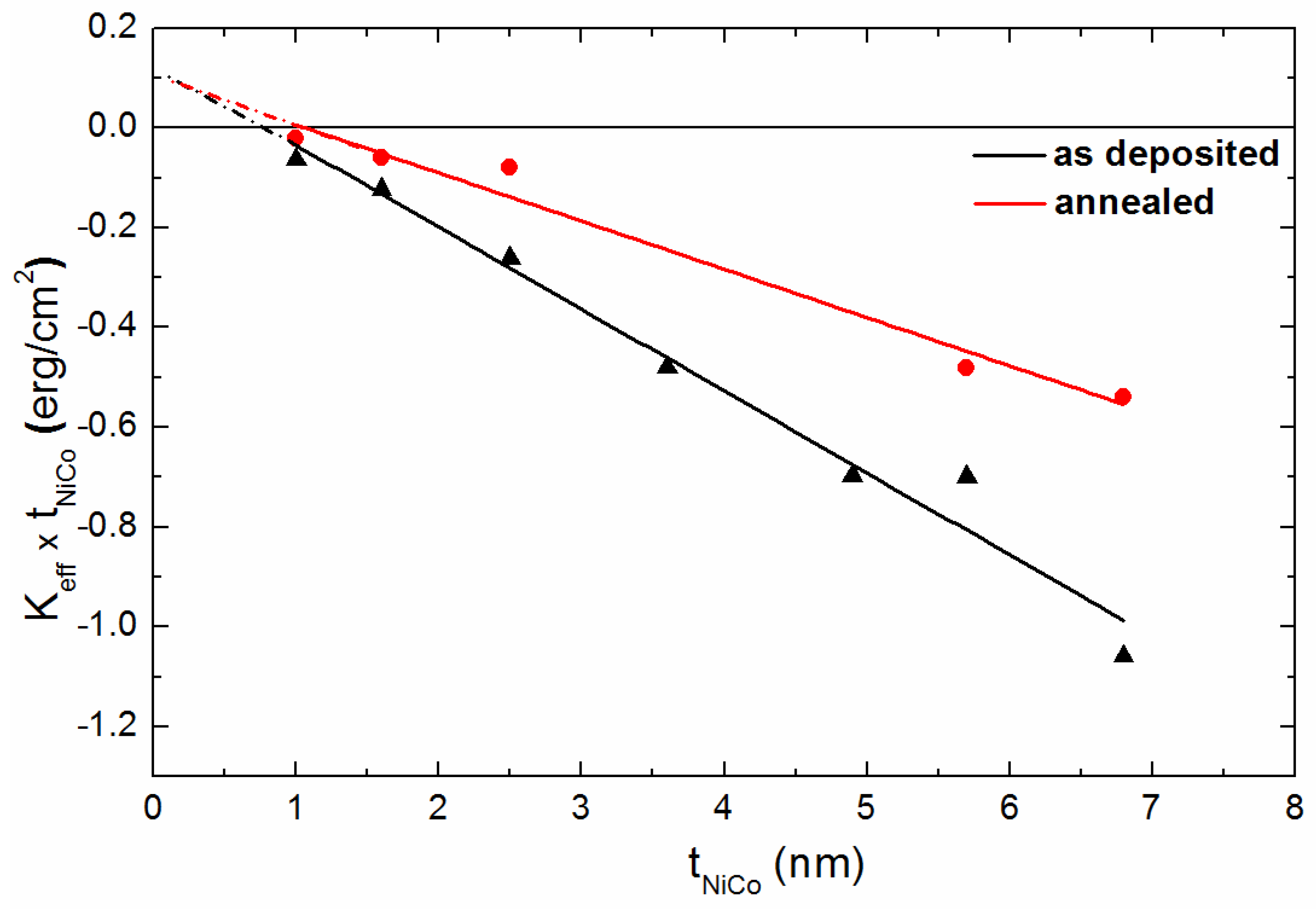 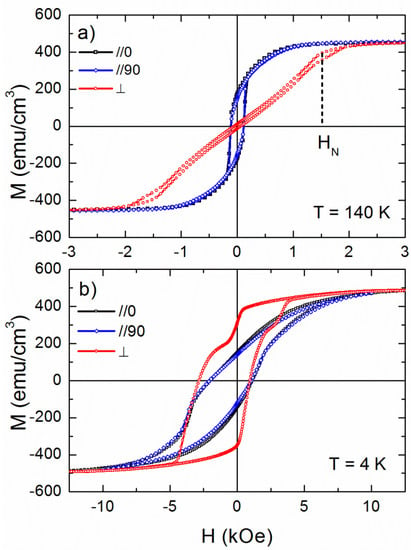 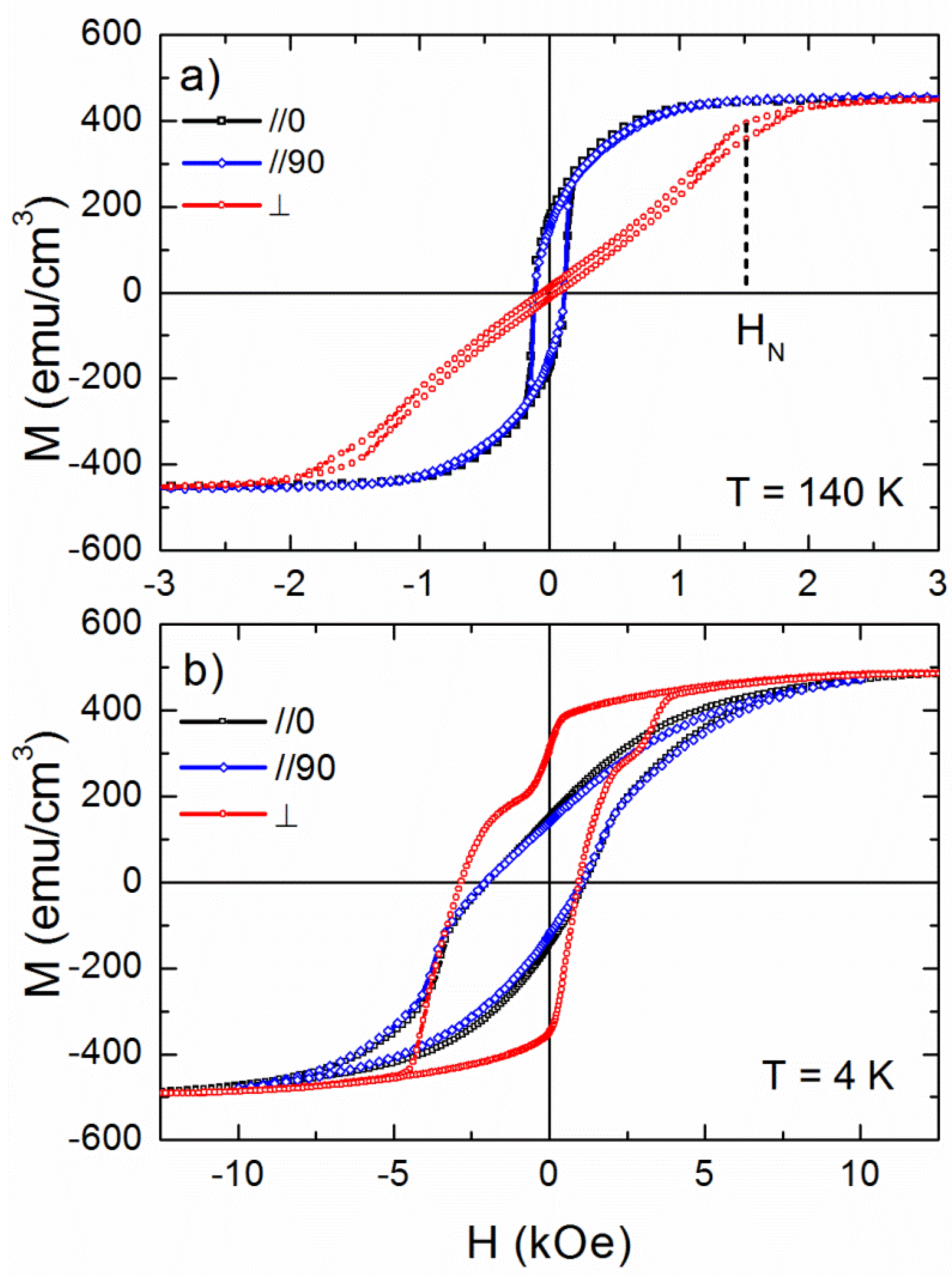 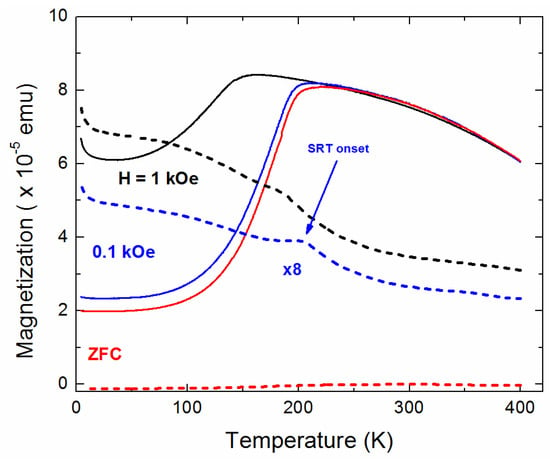 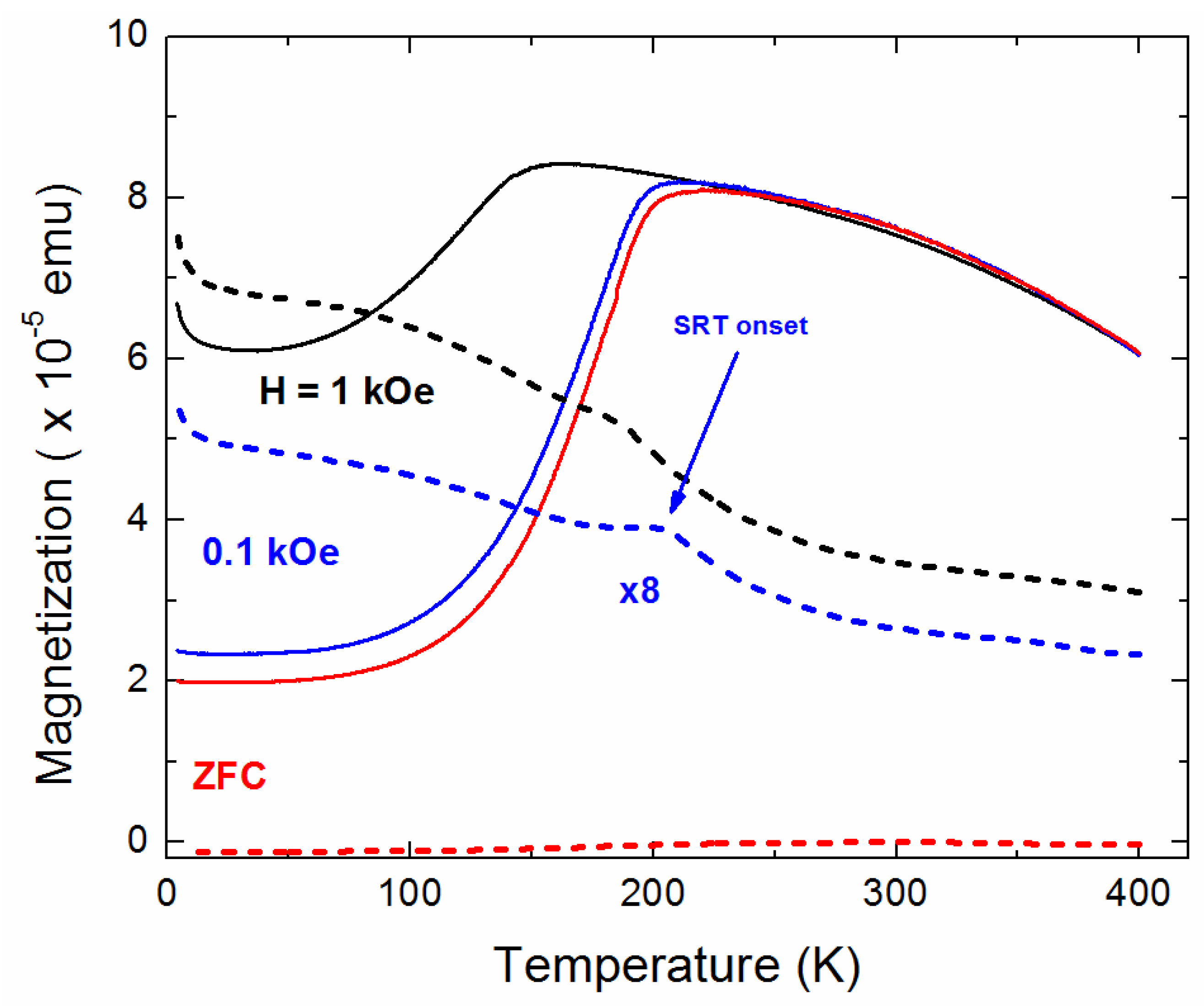 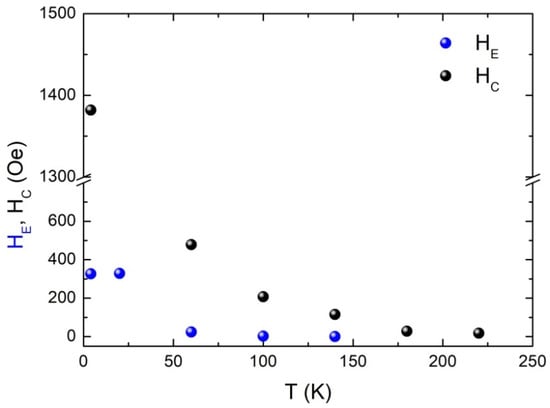 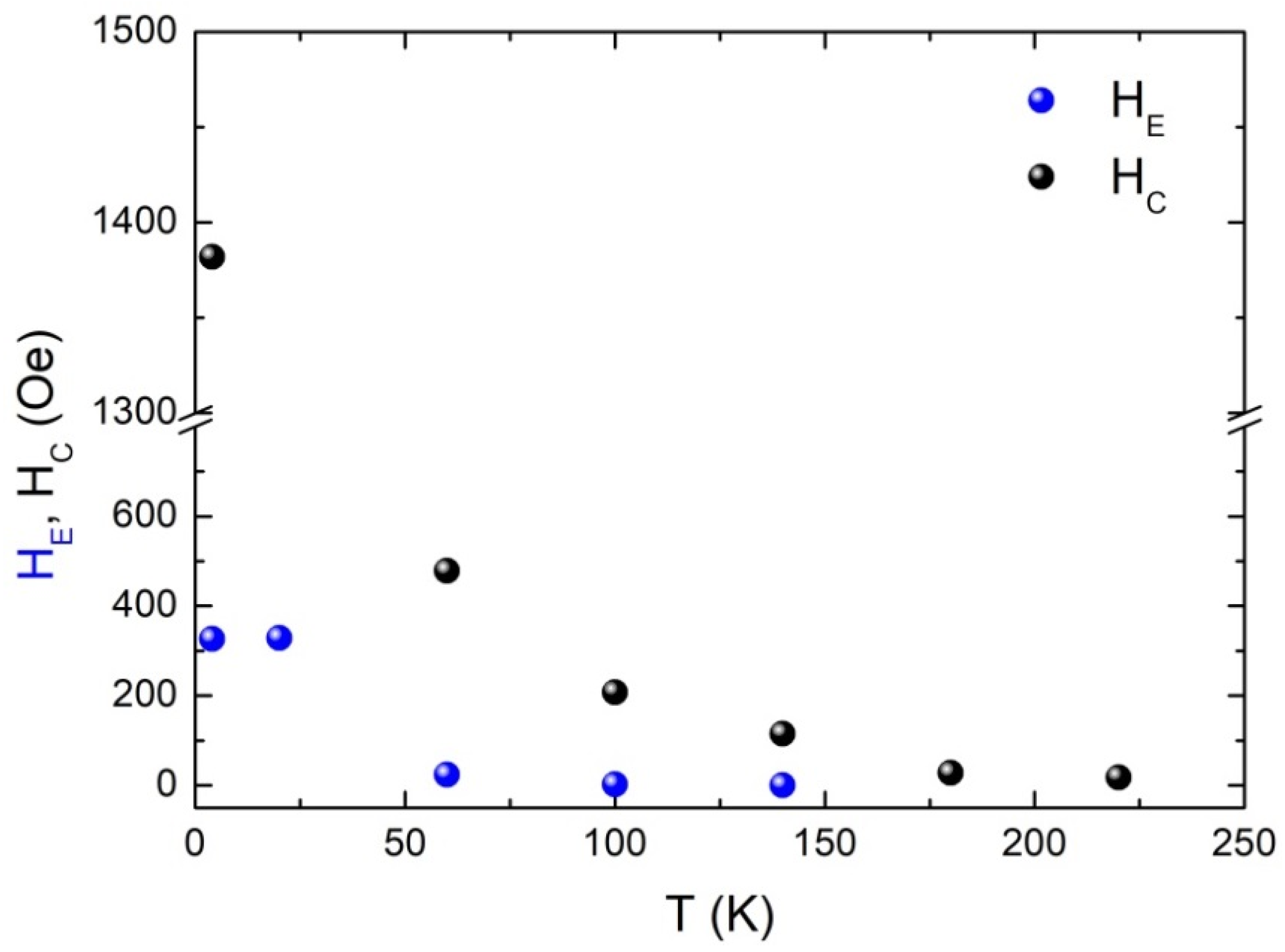