The Pre-Metaphase Stretch: A Re-Examination

In Escherichia coli, several enzymes have been identified that participate in completing replication on the chromosome, including RecG, SbcCD, ExoI, and RecBCD. However, other enzymes are likely to be involved and the precise enzymatic mechanism by which this reaction occurs remains unknown. Two steps predicted to be necessary to complete replication are removal of Okazaki RNA fragments and ligation of the nascent strands at convergent replication forks. E. coli encodes two RNases that remove RNA-DNA hybrids, rnhA and rnhB, as well as two ligases, ligA and ligB. Here, we used replication profiling to show that rnhA and ligA, encoding RNase HI and Ligase A, participate in the completion reaction. Deletion of rnhA impaired the ability to complete replication and resulted in over-replication in the terminus region. It additionally suppressed initiation events from oriC, suggesting a role for the enzyme in oriC-dependent initiation, as has been suggested previously. We also show that a temperature-sensitive mutation in Ligase A led to over-replication at sites where replication completes, and that degradation at these sites occurred upon shifting to the nonpermissive temperature. Deletion of rnhB or ligB did not affect the growth or profile of replication on the genome. View Full-Text
Keywords: ligase; RNase H; completion of DNA replication ligase; RNase H; completion of DNA replication
►▼ Show Figures 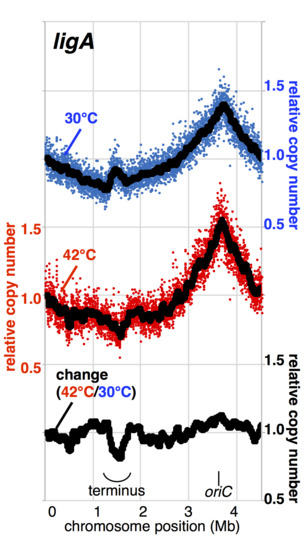