Crosstalk of Endothelial and Mesenchymal Stromal Cells under Tissue-Related O2

Mesenchymal stromal cells (MSCs) are considered a valuable tool for cell therapy. After systemic administration, the outcome of MSCs and endothelial cells (ECs) interactions strongly depend on the local microenvironment and tissue O2 levels in particular. In vitro analysis of EC effects on MSC regenerative potential in co-culture was performed after short-term interaction at “physiological” hypoxia (5% O2) and acute hypoxic stress (0.1% O2). At 5% O2, MSCs retained stromal phenotype and CFU-f numbers, osteogenic RUNX2 was upregulated. A shift in the expression of adhesion molecules, and an increase in transcription/synthesis of IL-6, IL-8 contributed to facilitation of directed migration of MSCs. In the presence of MSCs, manifestations of oxidative stress in ECs were attenuated, and a decrease in adhesion of PBMCs to TNF-α-activated ECs was observed. Under 0.1% O2, reciprocal effects of ECs and MSCs were similar to those at 5% O2. Meanwhile, upregulation of RUNX2 was canceled, IL-6 decreased, and IL-8 significantly increased. “Protective” effects of MSCs on TNF-α-ECs were less pronounced, manifested as NOS3 downregulation and intracellular NO elevation. Therefore, interaction with ECs at “physiological” hypoxia enhanced pro-regenerative capacities of MSCs including migration and anti-inflammatory modulation of ECs. Under acute hypoxic stress, the stimulating effects of ECs on MSCs and the “protective” potential of MSCs towards TNF-α-ECs were attenuated. View Full-Text
Keywords: multipotent mesenchymal stromal cells (MSCs); endothelial cells (ECs); hypoxia; co-culture multipotent mesenchymal stromal cells (MSCs); endothelial cells (ECs); hypoxia; co-culture
►▼ Show Figures 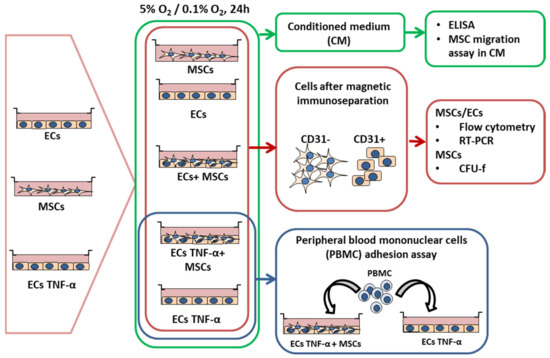