Oxygen: A New Open Access Journal Focused on the Biology and Chemistry of This Essential Molecule

Oxygen Is Instrumental for Biological Signaling: An Overview

Control of cellular function is extremely complex, being reliant on a wide range of components. Several of these are small oxygen-based molecules. Although reactive compounds containing oxygen are usually harmful to cells when accumulated to relatively high concentrations, they are also instrumental in the control of the activity of a myriad of proteins, and control both the upregulation and downregulation of gene expression. The formation of one oxygen-based molecule, such as the superoxide anion, can lead to a cascade of downstream generation of others, such as hydrogen peroxide (H2O2) and the hydroxyl radical (∙OH), each with their own reactivity and effect. Nitrogen-based signaling molecules also contain oxygen, and include nitric oxide (NO) and peroxynitrite, both instrumental among the suite of cell signaling components. These molecules do not act alone, but form part of a complex interplay of reactions, including with several sulfur-based compounds, such as glutathione and hydrogen sulfide (H2S). Overaccumulation of oxygen-based reactive compounds may alter the redox status of the cell and lead to programmed cell death, in processes referred to as oxidative stress, or nitrosative stress (for nitrogen-based molecules). Here, an overview of the main oxygen-based molecules involved, and the ramifications of their production, is given. View Full-Text
Keywords: carbon monoxide; hydrogen peroxide; hydroxyl radicals; hydrogen sulfide; NADPH oxidase; nitric oxide; peroxynitrite; redox; superoxide carbon monoxide; hydrogen peroxide; hydroxyl radicals; hydrogen sulfide; NADPH oxidase; nitric oxide; peroxynitrite; redox; superoxide
►▼ Show Figures 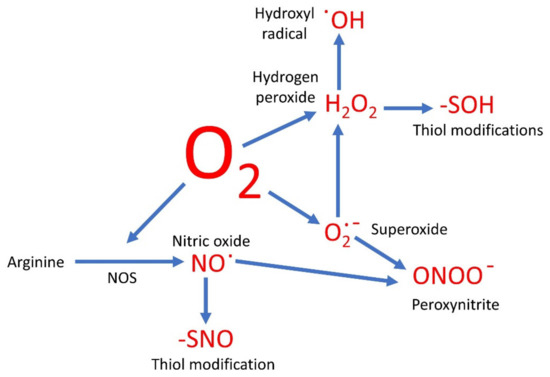