Synthesis of Theaflavins and Their Functions
Previous Article in Journal

Melatonin is a pleiotropic molecule with various important physiological roles in vertebrates. l-aromatic amino acid decarboxylase (AAAD) is the second enzyme for melatonin synthesis. By far, a clear-cut gene function of AAAD in the biosynthesis of melatonin has been unclear in vertebrates. Here, we provide novel insights into the evolution of AAAD based on 77 vertebrate genomes. According to our genome-wide alignments, we extracted a total of 151 aaad nucleotide sequences. A phylogenetic tree was constructed on the basis of these sequences and corresponding protein alignments, indicating that tetrapods and diploid bony fish genomes contained one aaad gene and a new aaad-like gene, which formed a novel AAAD family. However, in tetraploid teleosts, there were two copies of the aaad gene due to whole genome duplication. A subsequent synteny analysis investigated 81 aaad sequences and revealed their collinearity and systematic evolution. Interestingly, we discovered that platypus (Ornithorhynchus anatinus), Atlantic cod (Guadus morhua), Mexican tetra (Astyanax mexicanus), and a Sinocyclocheilus cavefish (S. anshuiensis) have long evolutionary branches in the phylogenetic topology. We also performed pseudogene identification and selection pressure analysis; however, the results revealed a deletion of 37 amino acids in Atlantic cod and premature stop codons in the cave-restricted S. anshuiensis and A. mexicanus, suggesting weakening or disappearing rhythms in these cavefishes. Selective pressure analysis of aaad between platypus and other tetrapods showed that rates of nonsynonymous (Ka) and synonymous (Ks) substitutions were higher when comparing the platypus to other representative tetrapods, indicating that, in this semiaquatic mammal, the aaad gene experienced selection during the process of evolution. In summary, our current work provides novel insights into aaad genes in vertebrates from a genome-wide view. View Full-Text
Keywords: l-aromatic amino acid decarboxylase (AAAD); melatonin biosynthesis; molecular evolution; vertebrate; pseudogene l-aromatic amino acid decarboxylase (AAAD); melatonin biosynthesis; molecular evolution; vertebrate; pseudogene
►▼ Show Figures 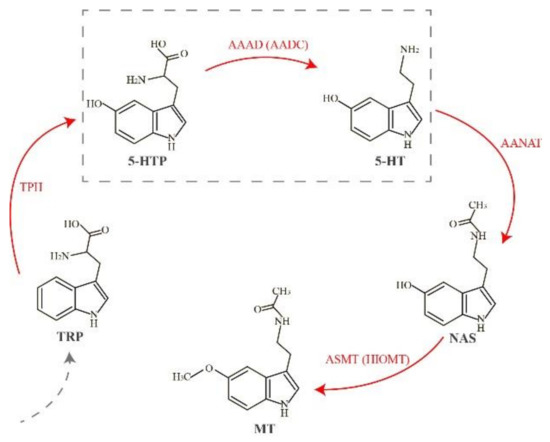