Iron as a Therapeutic Target in HFE-Related Hemochromatosis: Usual and Novel Aspects

Genetic hemochromatosis is an iron overload disease that is mainly related to the C282Y mutation in the HFE gene. This gene controls the expression of hepcidin, a peptide secreted in plasma by the liver and regulates systemic iron distribution. Homozygous C282Y mutation induces hepcidin deficiency, leading to increased circulating transferrin saturation, and ultimately, iron accumulation in organs such as the liver, pancreas, heart, and bone. Iron in excess may induce or favor the development of complications such as cirrhosis, liver cancer, diabetes, heart failure, hypogonadism, but also complaints such as asthenia and disabling arthritis. Iron depletive treatment mainly consists of venesections that permit the removal of iron contained in red blood cells and the subsequent mobilization of stored iron in order to synthesize hemoglobin for new erythrocytes. It is highly efficient in removing excess iron and preventing most of the complications associated with excess iron in the body. However, this treatment does not target the biological mechanisms involved in the iron metabolism disturbance. New treatments based on the increase of hepcidin levels, by using hepcidin mimetics or inducers, or inhibitors of the iron export activity of ferroportin protein that is the target of hepcidin, if devoid of significant secondary effects, should be useful to better control iron parameters and symptoms, such as arthritis. View Full-Text
Keywords: iron; genetic hemochromatosis; non transferrin bound iron; hepcidin; ferroportin; venesections iron; genetic hemochromatosis; non transferrin bound iron; hepcidin; ferroportin; venesections
►▼ Show Figures 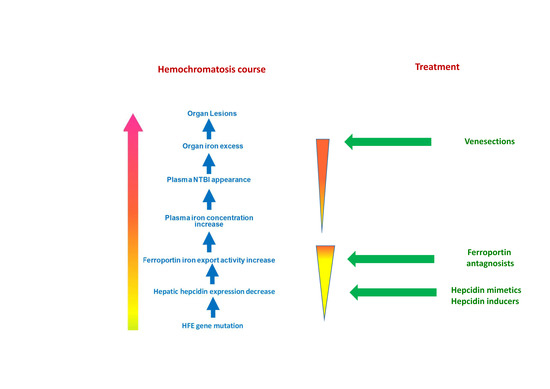