Design and Development of Novel Urea, Sulfonyltriurea, and Sulfonamide Derivatives as Potential Inhibitors of Sphingosine Kinase 1
Next Article in Special Issue

Recent studies using the genetic partial epilepsy model have demonstrated that hyperfunction of astroglial hemichannels contributes to pathomechanism of epileptic seizure. Therefore, to explore the novel anticonvulsive mechanisms, the present study determined the effects of voltage-dependent Na+ channel (VDSC)-inhibiting anticonvulsants, carbamazepine (CBZ), lacosamide (LCM), and zonisamide (ZNS) on the astroglial release of l-glutamate and adenosine triphosphate (ATP). The effects of subchronic administration of therapeutic-relevant dose of three anticonvulsants on the release of l-glutamate and ATP in the orbitofrontal cortex (OFC) were determined using microdialysis. The concentration-dependent effects of acute and subchronic administrations of anticonvulsants on astroglial gliotransmitter release were determined using primary cultured astrocytes. The concentration-dependent effects of subchronic administrations of anticonvulsants on connexin43 (Cx43) expression in the plasma membrane of primary cultured astrocytes were determined using the Simple Western system. An increase in the levels of extracellular K+ resulted in a concentration-dependent increase in the astroglial release of l-glutamate and ATP. The depleted levels of extracellular Ca2+ alone did not affect astroglial gliotransmitter release but did accelerate K+-evoked gliotransmitter release via activation of astroglial hemichannels. Both non-selective hemichannel inhibitor carbenoxolone (CBX) and selective Cx43 inhibitor GAP19 prevented both gliotransmitter release through activated astroglial hemichannels and the hemichannel-activating process induced by elevation of the levels of extracellular K+ with depletion of the levels of extracellular Ca2+. ZNS subchronically decreased Cx43 expression and acutely/subchronically inhibited Cx43 hemichannel activity. LCM acutely inhibited hemichannel activity but did not subchronically affect Cx43 expression. Therapeutic-relevant concentration of CBZ did not affect hemichannel activity or Cx43 expression, but supratherapeutic concentration of CBZ decreased Cx43 expression and hemichannel activity. Therefore, the present study demonstrated the distinct effects of CBZ, LCM, and ZNS on gliotransmitter release via modulation of astroglial hemichannel function. The different features of the effects of three VDSC-inhibiting anticonvulsants on astroglial transmission associated with hemichannels, at least partially, possibly contributing to the formation of the properties of these three anticonvulsants, including the antiepileptic spectrum and adverse effects regarding mood and cognitive disturbance. View Full-Text
Keywords: astrocyte; carbamazepine; lacosamide; zonisamide; microdialysis; hemichannel astrocyte; carbamazepine; lacosamide; zonisamide; microdialysis; hemichannel
►▼ Show Figures 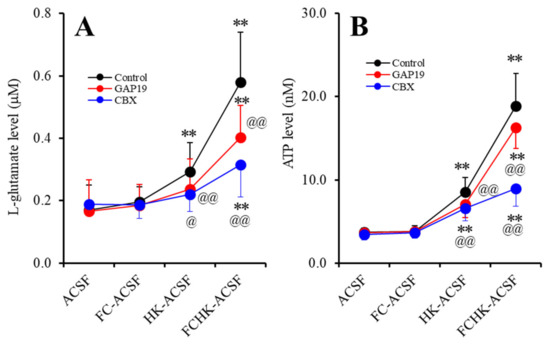