Accumulation, Biotransformation, Histopathology and Paralysis in the Pacific Calico Scallop Argopecten ventricosus by the Paralyzing Toxins of the Dinoflagellate Gymnodinium catenatum

Palytoxin (PLTX) is the reference compound for a group of potent marine biotoxins, for which the molecular target is Na+/K+-ATPase. Indeed, ouabain (OUA), a potent blocker of the pump, is used to inhibit some PLTX effects in vitro. However, in an effort to explain incomplete inhibition of PLTX cytotoxicity, some studies suggest the possibility of two different binding sites on Na+/K+-ATPase. Hence, this study was performed to characterize PLTX binding to intact HaCaT keratinocytes and to investigate the ability of OUA to compete for this binding. PLTX binding to HaCaT cells was demonstrated by immunocytochemical analysis after 10 min exposure. An anti-PLTX monoclonal antibody-based ELISA showed that the binding was saturable and reversible, with a Kd of 3 × 10−10 M. However, kinetic experiments revealed that PLTX binding dissociation was incomplete, suggesting an additional, OUA-insensitive, PLTX binding site. Competitive experiments suggested that OUA acts as a negative allosteric modulator against high PLTX concentrations (0.3–1.0 × 10−7 M) and possibly as a non-competitive antagonist against low PLTX concentrations (0.1–3.0 × 10−9 M). Antagonism was supported by PLTX cytotoxicity inhibition at OUA concentrations that displaced PLTX binding (1 × 10−5 M). However, this inhibition was incomplete, supporting the existence of both OUA-sensitive and -insensitive PLTX binding sites. View Full-Text
Keywords: palytoxin; ouabain; binding; ELISA; HaCaT cells palytoxin; ouabain; binding; ELISA; HaCaT cells
►▼ Show Figures 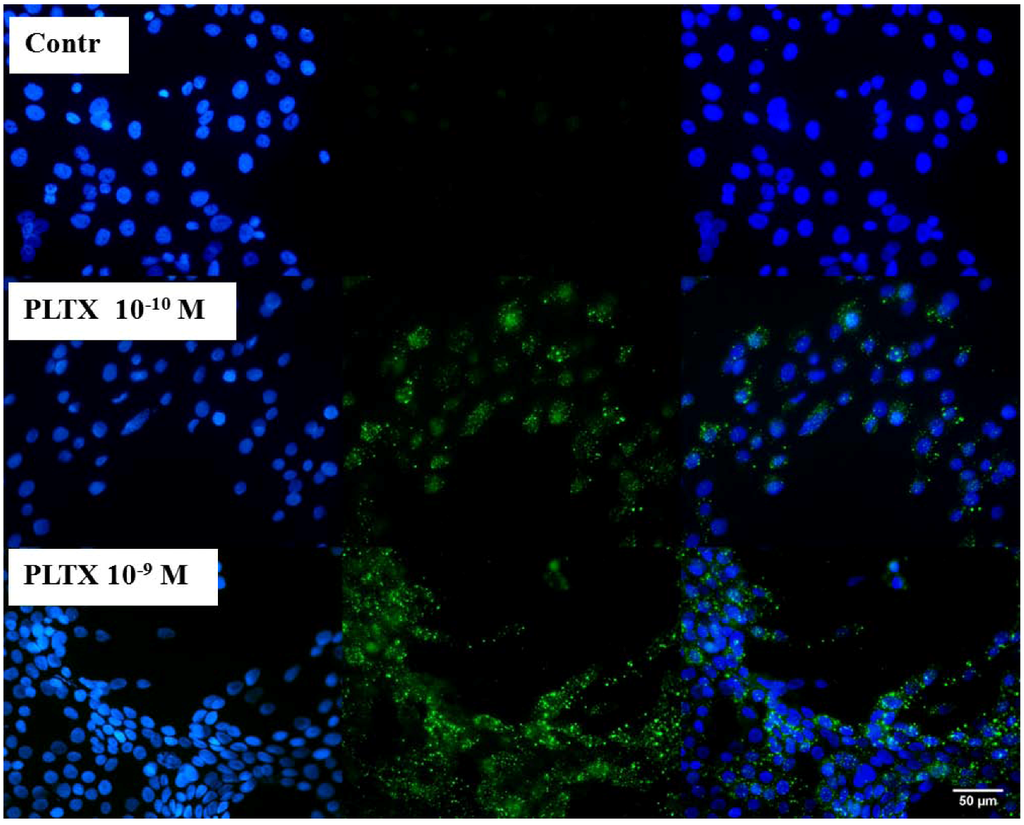