Integrating Engineering, Manufacturing, and Regulatory Considerations in the Development of Novel Antivenoms

Lancehead pit-vipers (Bothrops genus) are an extremely diverse and medically important group responsible for the greatest number of snakebite envenomations and deaths in South America. Bothrops atrox (common lancehead), responsible for majority of snakebites and related deaths within the Brazilian Amazon, is a highly adaptable and widely distributed species, whose venom variability has been related to several factors, including geographical distribution and habitat type. This study examined venoms from four B. atrox populations (Belterra and Santarém, PA; Pres. Figueiredo, AM and São Bento, MA), and two additional Bothrops species (B. jararaca and B. neuwiedi) from Southeastern region for their coagulotoxic effects upon different plasmas (human, amphibian, and avian). The results revealed inter– and intraspecific variations in coagulotoxicity, including distinct activities between the three plasmas, with variations in the latter two linked to ecological niche occupied by the snakes. Also examined were the correlated biochemical mechanisms of venom action. Significant variation in the relative reliance upon the cofactors calcium and phospholipid were revealed, and the relative dependency did not significantly correlate with potency. Relative levels of Factor X or prothrombin activating toxins correlated with prey type and prey escape potential. The antivenom was shown to perform better in neutralising prothrombin activation activity than neutralising Factor X activation activity. Thus, the data reveal new information regarding the evolutionary selection pressures shaping snake venom evolution, while also having significant implications for the treatment of the envenomed patient. These results are, therefore, an intersection between evolutionary biology and clinical medicine. View Full-Text
Keywords: venoms; coagulotoxicity; antivenom; variations; adaptive pressures; venom induced consumptive coagulopathy venoms; coagulotoxicity; antivenom; variations; adaptive pressures; venom induced consumptive coagulopathy
►▼ Show Figures 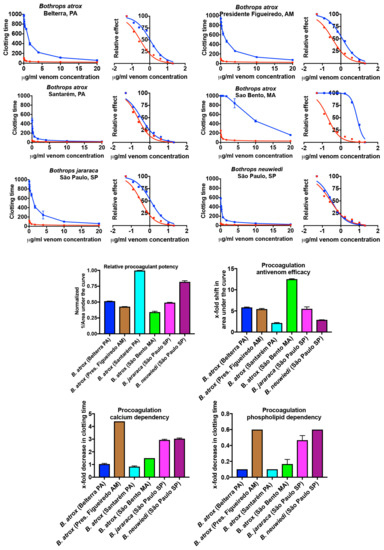