Effect of Wheat Milling Process on the Distribution of Alternaria Toxins

To evaluate the influence of weather conditions on mycotoxin presence in wheat, deoxynivalenol (DON), 3-acetyldeoxynivalenol (3AcDON), 15-acetyldeoxynivalenol (15AcDON), fusarenon-X (FUS-X), nivalenol (NIV), HT-2 toxin (HT-2), T-2 toxin (T-2), diacetoxyscirpenol (DAS), neosolaniol (NEO) and zearalenone (ZEN) were evaluated in 102 Romanian wheat samples coming from five wheat growing areas during 2015. Only six mycotoxins were detected, while FUS-X, DAS, NEO and NIV were not present in the wheat samples. Mycotoxin concentrations were correlated with precipitation and temperature values during anthesis and the preharvest period. Overall, the highest frequency was registered for DON, while the lowest frequency was registered for NIV. In the North Muntenia, DON and ZEN registered high frequencies (68% and 16%, respectively). This region was characterized in June and July by medium to high values of rainfall (41–100 mm/month) and normal temperatures (mean of 20.0 °C in June and 24.0 °C in July), suggesting that precipitation levels influence fungi and mycotoxin development to a greater extent compared to the influence of temperature. View Full-Text
Keywords: mycotoxins; GC-MS/MS; cereals; Romania; precipitations; air temperature mycotoxins; GC-MS/MS; cereals; Romania; precipitations; air temperature
►▼ Show Figures 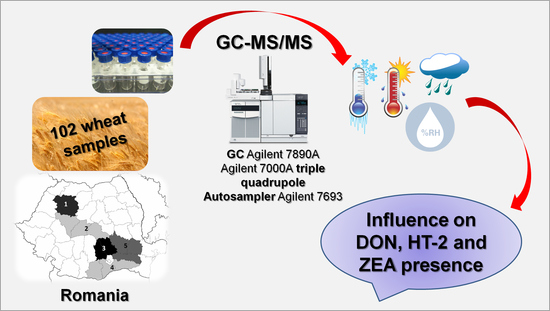