Venomous Landmines: Clinical Implications of Extreme Coagulotoxic Diversification and Differential Neutralization by Antivenom of Venoms within the Viperid Snake Genus Bitis
Next Article in Special Issue

While the intracellular function of many toxic and bioactive cyanobacterial metabolites is not yet known, microcystins have been suggested to have a protective role in the cyanobacterial metabolism, giving advantage to toxic over nontoxic strains under stress conditions. The zooplankton grazer Daphnia reduce cyanobacterial dominance until a certain density, which may be supported by Daphnia exudates, affecting the cyanobacterial physiological state and metabolites’ production. Therefore, we hypothesized that D. magna spent medium will impact the production of cyanobacterial bioactive metabolites and affect cyanobacterial photosynthetic activity in the nontoxic, but not the toxic strain. Microcystin (MC-LR and des-MC-LR) producing M. aeruginosa PCC7806 and its non-microcystin producing mutant were exposed to spent media of different D. magna densities and culture durations. D. magna spent medium of the highest density (200/L) cultivated for the shortest time (24 h) provoked the strongest effect. D.magna spent medium negatively impacted the photosynthetic activity of M. aeruginosa PCC7806, as well as the dynamics of intracellular and extracellular cyanobacterial metabolites, while its mutant was unaffected. In the presence of Daphnia medium, microcystin does not appear to have a protective role for the strain. On the contrary, extracellular cyanopeptolin A increased in M. aeruginosa PCC7806 although the potential anti-grazing role of this compound would require further studies. View Full-Text
Keywords: cyanobacteria; secondary metabolites; PCC7806; toxic; mutant; infochemicals cyanobacteria; secondary metabolites; PCC7806; toxic; mutant; infochemicals
►▼ Show Figures 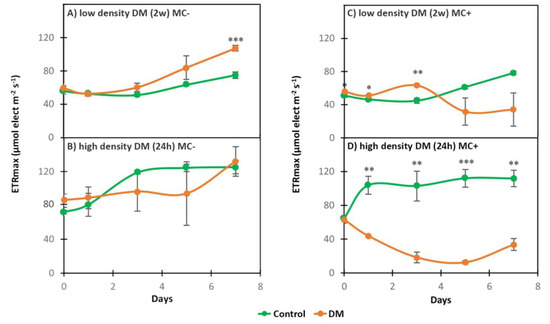