Antidotal Potency of the Novel, Structurally Different Adsorbents in Rats Acutely Intoxicated with the T-2 Toxin
Next Article in Special Issue

A Mini-Review on Detection Methods of Microcystins

Scarabaeoidea and Chrysomeloidea insects are agriculture-destructive coleopteran pests. Few effective Bacillus thuringiensis (Bt) insecticidal proteins against these species have been described. Bt isolate BtSU4 was found to be active against coleopteran insects. Genome sequencing revealed two new cry8 genes in BtSU4, designated as cry8Ha1 and cry8Ia1. Both genes expressed a 135 kDa protoxin forming irregular shape crystals. Bioassays performed with Cry8Ha1 protoxin showed that it was toxic to both larvae and adult stages of Holotrichia parallela, also to Holotrichia oblita adults and to Anoplophora glabripennis larvae, but was not toxic to larval stages of H. oblita or Colaphellus bowringi. The Cry8Ia1 protoxin only showed toxicity against H. parallela larvae. After activation with chymotrypsin, the Cry8Ha1 activated toxin lost its insecticidal activity against H. oblita adults and reduced its activity on H. parallela adults, but gained toxicity against C. bowringi larvae, a Chrysomeloidea insect pest that feeds on crucifer crops. The chymotrypsin activated Cry8Ia1 toxin did not show toxicity to any one of these insects. These data show that Cry8Ha1 and Cry8Ia1 protoxin and activated toxin proteins have differential toxicity to diverse coleopteran species, and that protoxin is a more robust protein for the control of coleopteran insects. View Full-Text
Keywords: Bacillus thuringiensis; cry8 genes; Coleopteran; insecticidal activity; Cry protoxin; dual mode of action Bacillus thuringiensis; cry8 genes; Coleopteran; insecticidal activity; Cry protoxin; dual mode of action
►▼ Show Figures 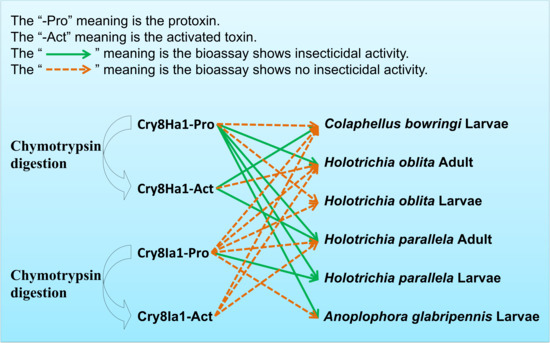