Two agro-ecological zones in Kenya were selected to compare the distribution in maize of Aspergillus spp. and their toxigenicity. These were Nandi County, which is the main maize growing region in the country but where no human aflatoxicoses have been reported, and Makueni County where most of the aflatoxicosis cases have occurred. Two hundred and fifty-five households were sampled in Nandi and 258 in Makueni, and Aspergillus was isolated from maize. Aspergillus flavus and A. parasiticus isolates were tested for the presence of aflD and aflQ genes. Positive strains were induced to produce aflatoxins on yeast extract sucrose and quantified using liquid chromatography-tandem mass spectrometry (LCMSMS). Aspergillus flavus was the most common contaminant, and the incidence of occurrence in Nandi and Makueni was not significantly different (82.33% and 73.26%, respectively). Toxigenic strains were more prevalent than non-toxigenic strains. All the toxigenic strains from Makueni were of the S-type while those from Nandi belonged to the l-type. Quantitative differences in aflatoxin production in vitro between isolates and between strains were detected with S strains producing relatively larger amounts of total aflatoxins, B toxins and lower values for G toxins. This was in accord with the frequent aflatoxicosis outbreaks in Makueni. However some L strains produced considerable amounts of B toxins. Given the widespread distribution of toxigenic strains in both regions, the risk of aflatoxin poisoning is high when favorable conditions for toxin production occur. View Full-Text
Keywords: Aspergillus; section Flavi; aflatoxins; maize; Kenya Aspergillus; section Flavi; aflatoxins; maize; Kenya
►▼ Show Figures 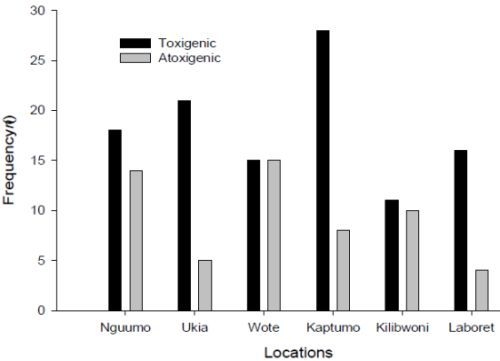