Motor abnormalities have been suggested to play a role in most neuropsychiatric disorders, as a potential generic neurodevelopmental vulnerability. However, they still represent a neglected area, with a paucity of empirical studies, especially in pediatric populations. This case-control study aimed to comprehensively assess motor functioning in children with atypical neurodevelopment and investigate whether any socio-demographic or clinical characteristics would concur with motor difficulties to distinguish children with neurodevelopmental disorders (NDD) from healthy controls. Socio-demographic (age and gender) and clinical (intelligence quotient, gait, movement, and coordination) data were collected on 114 children aged 5–15 (83 with NDD, 31 healthy controls). Male children were at significantly higher risk for NDD (OR: 13.023, p < 0.001). Furthermore, there was a statistically significant interaction between the total intelligence quotient and overall coordination such that increasing levels of total intelligence quotient appeared to protect against the likelihood of being diagnosed with an NDD, but only in the context of a preserved coordination (OR: 0.964, p = 0.038). Collectively, results may have important public health implications, as they point towards the development of new approaches to establish an early prognosis in neurodevelopment, including assessing motor difficulties and mitigating their impact on children’s quality of life. View Full-Text
Keywords: Autism Spectrum Disorder; Attention-Deficit/Hyperactivity Disorder; Tourette Disorder; transdiagnostic approach; mental health prevention Autism Spectrum Disorder; Attention-Deficit/Hyperactivity Disorder; Tourette Disorder; transdiagnostic approach; mental health prevention
►▼ Show Figures 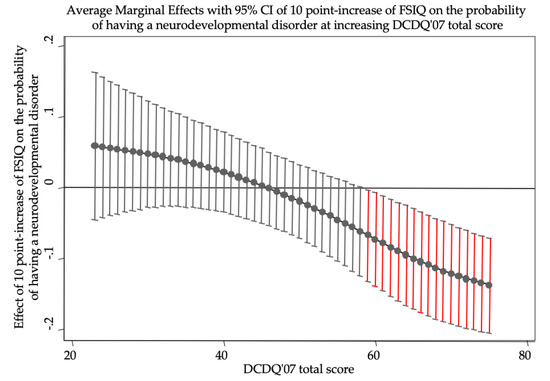