Submit to Religions Review for Religions 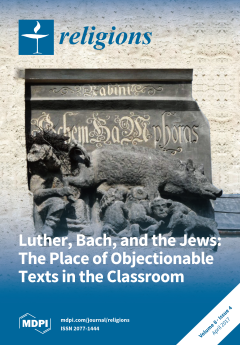 Cover Story (view full-size image): This article examines the pedagogical challenges and value of using objectionable texts in the classroom by way of two case studies: Martin Luther’s writings on Jews and two works by J.S. Bach. The use of morally or otherwise offensive materials in the classroom has the potential to degrade the learning environment or even produce harm if not carefully managed. On the other hand, historically informed instructors can use difficult works to model good scholarly methodology and offer useful contexts for investigating of contemporary issues. Moral judgments about historical actors and events are inevitable, the authors argue, so the instructor’s responsibility is to seize the opportunity for constructive dialogue. View the paper here.
Previous Issue
Volume 8, March
Next Issue
Volume 8, May
We use cookies on our website to ensure you get the best experience. Read more about our cookies here.
Accept
We have just recently launched a new version of our website. Help us to further improve by taking part in this short 5 minute survey here. here.
Never show this again