Recent furtherance in the field of analog circuit design allowed for the evolution of new electronic devices supporting various applications. A wide market opportunity has been created for battery-operated portable devices such as smartphones, health monitor watches, home assistants, earphones, etc. The two essential characteristics of devices for such applications are device runtime on battery and the form-factor [1,2]. The device runtime is extended by either using a low power consumption circuits for the application or using high-efficiency DC–DC converters. Restriction of power consumption on the application core circuitry can compromise the performance of system. The use of high-efficiency DC–DC converters increases the runtime, and the use of fully-integrated converters, such as switched-capacitor converters, further helps to reduce the overall solution size [3]. Additionally, increasing the switching frequency of the DC–DC converter reduces the size of the energy element such as the inductor or capacitor [4].
Switching converters have output voltage ripples that make them not suitable for all applications. Low drop-out (LDO) regulators are popular when a clean and quiet power supply is required [5]. The LDO regulators are efficient when the output voltage is close to the input supply voltage, and its efficiency is the ratio of output to input voltage. As the supply voltage rails are reduced in lower CMOS process technologies, where the length of the FET is shrunk, the gain obtained from a single stage amplifier is lower. The DC accuracy and transient response of an LDO is directly set by the closed-loop gain and bandwidth of the error amplifier. Moreover, the design for such high frequency requires transistor models to include all the parasitic capacitances [6].
Multi-stage amplifiers are used for overall high gain. Increasing the number of stages creates additional high impedance nodes making the amplifier unstable due to multiple poles [7]. A simple Miller compensation (SMC) and nested Miller compensation (NMC) are commonly used in two-stage and three-stage amplifiers for closed-loop stability, respectively. However, these multi-stage amplifiers suffers from bandwidth reduction as explained in [8,9]. In deep submicron CMOS process, a three-stage amplifier is sufficient to achieve acceptable overall gain for many applications.
Nested Miller compensation (NMC) is a popular frequency compensation technique used to stabilize three-stage amplifiers [10], this compensation scheme is shown in Figure 1. It must be noticed that if is 0, the circuit shown in Figure 1 configures to a traditional NMC circuit. The compensation in a NMC scheme uses two capacitors connected between the output node and intermediate nodes of the amplifier. The nulling resistor, allows cancellation of the RHP zero created by , and increasing > creates an LHP zero which helps in phase boost [11]. This variant of an NMC circuit is denominated as nested Miller compensation with nulling resistor (NMCNR). The transfer function of NMC with nulling resistor is given by: where , , , . Resistors , and are the output impedance at nodes , and , respectively. The transfer function of a traditional NMC can be obtained by evaluating the Equation (1) with .
NMC has one RHP zero, one LHP zero and three LHP poles when . As the compensation capacitors are loading the output, this amplifier suffers from poor slew rate at high frequency. Under the slewing condition, is required to pull up by charging the load capacitor , the internal node is pulled down towards the ground to allow more current to flow through . When is pulled low, the compensation capacitor appears to be in parallel with loading the output node causing a slow slew rate. Moreover, this changes the overall compensation of the circuit where disappears and the entire circuit is compensated by only. This changes the amplifier stability conditions considerably and increases the settling time. To design a stable NMC amplifier, the compensation capacitors must be chosen with the following conditions [7]:
The load capacitor affects the location of non-dominant poles and gain bandwidth (GBW) product making this compensation suitable only for applications with small range of load capacitance. GBW for NMC is given by [12]:
Reverse nested Miller compensation (RNMC) is another compensation where the output of the first stage of the amplifier is loaded with both compensation capacitors causing the internal voltage to be slew limited [13,14]. Referring to Figure 2, RNMC requires non-inverting configuration in the third stage between and . This limits the driving capability of the output stage due to limited voltage swing on . The transfer function of RNMC is given by [13]: where , and .
Multiple advanced compensation techniques are published in the literature to extend the bandwidth, such as the double pole–zero canceling technique [15], multipath NMC (MNMC) [10], nested Gm-C compensation (NGCC) [16] and damping factor control frequency compensation (DFCFC) [7]. However, all these compensation techniques have strong dependency on output load capacitor for stability. NMC and RNMC with combination of voltage and current buffers are proposed in the literature to isolate the output node or compensate for RHP zero [17]. The proposed compensation scheme described in the next section solves these challenges.

An improved frequency compensation method is proposed using a single capacitor with auxiliary feedback loop connected between the two intermediate nodes as shown in Figure 3. Typically, the internal nodes of a multi-stage amplifier have a finite voltage swing compared to its output voltage swing. The use of the compensation capacitor on the high-swing output node severely affects the circuit slew rate compared to loading compensation capacitors on internal nodes where the voltage swing is limited. Using this advantage, the proposed compensation scheme uses internal circuit nodes and for compensation.
Referring to Figure 3, , and are the three stages of the amplifier. are used for compensation, where and generate a Miller effect over adding one LHP zero-pole pair to the amplifier transfer function. The small-signal model for the proposed compensation is shown in Figure 4, where , , , and are the output impedance, and , , , are the total parasitic capacitances at nodes , , , and is the load capacitor at node . The transfer function is given by: where , and .
The proposed compensation has one LHP zero and four LHP poles. Two of these poles are high frequency poles set by and parasitic capacitaces at nodes and , respectively. Observe that is connected to a low impedance node and the pole associated with is located at a very high frequency and can be neglected. Similarly, parasitic capacitance is connected to a node where the effect of capacitor is dominant; therefore, it can be also neglected. Additionally, a pole-zero cancellation can be achieved by selecting ≈ , and this condition is controlled by the relationship between the transconductances and , where . The compensation capacitor can be selected by using . Observe that the compensation capacitor can be reduced by increasing the output transconductace . The dominant pole at node is set by and , where these gains divide the node frequency pole ( to move the pole to a low frequency. Sizing adequately, the non-dominant pole () can be compensated. If parasitic capacitors are neglected such as most of the models reported in the literature, the transfer of Equation (6) can be approximated to a single pole transfer function. The pole zero location illustration is shown in Figure 5, where and are a very high frequency pole and zero from intermediate nodes.
Phase margin is given by:
Observe that the pole-zero cancelled transfer function in Equation (9) yields similar response when well-known techniques such as voltage followers, current followers, and multipath Miller approaches are used [15]; except that in the proposed compensation, the second and third poles are located at high frequency, which is set by parasitic capacitances at the output of the first and second stages instead of compensation capacitors to provide a phase boost.
Referring to the slew-rate degradation in NMC, the proposed compensation scheme remains connected in the original configuration during slewing condition, and no settling time degradation is observed. The proposed compensation can be used for improved load transient response in LDOs where high output load capacitance is used.

The research problem is identified, executed, and solved by A.R.L. conducted a feasibility study through simulation, and transfer function calculations. A.V. conducted the literature review and advised on the architecture and wrote the initial draft manuscript. L.A.F.O., L.A.C.M., and D.M.F. supervised research that includes and is not limited to project administration, design and simulation results review, manuscript review, and corrections. All authors have read and agreed to the published version of the manuscript. 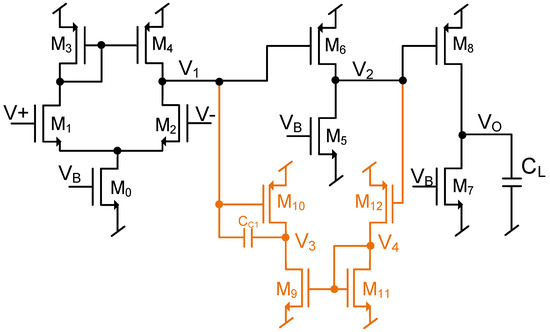 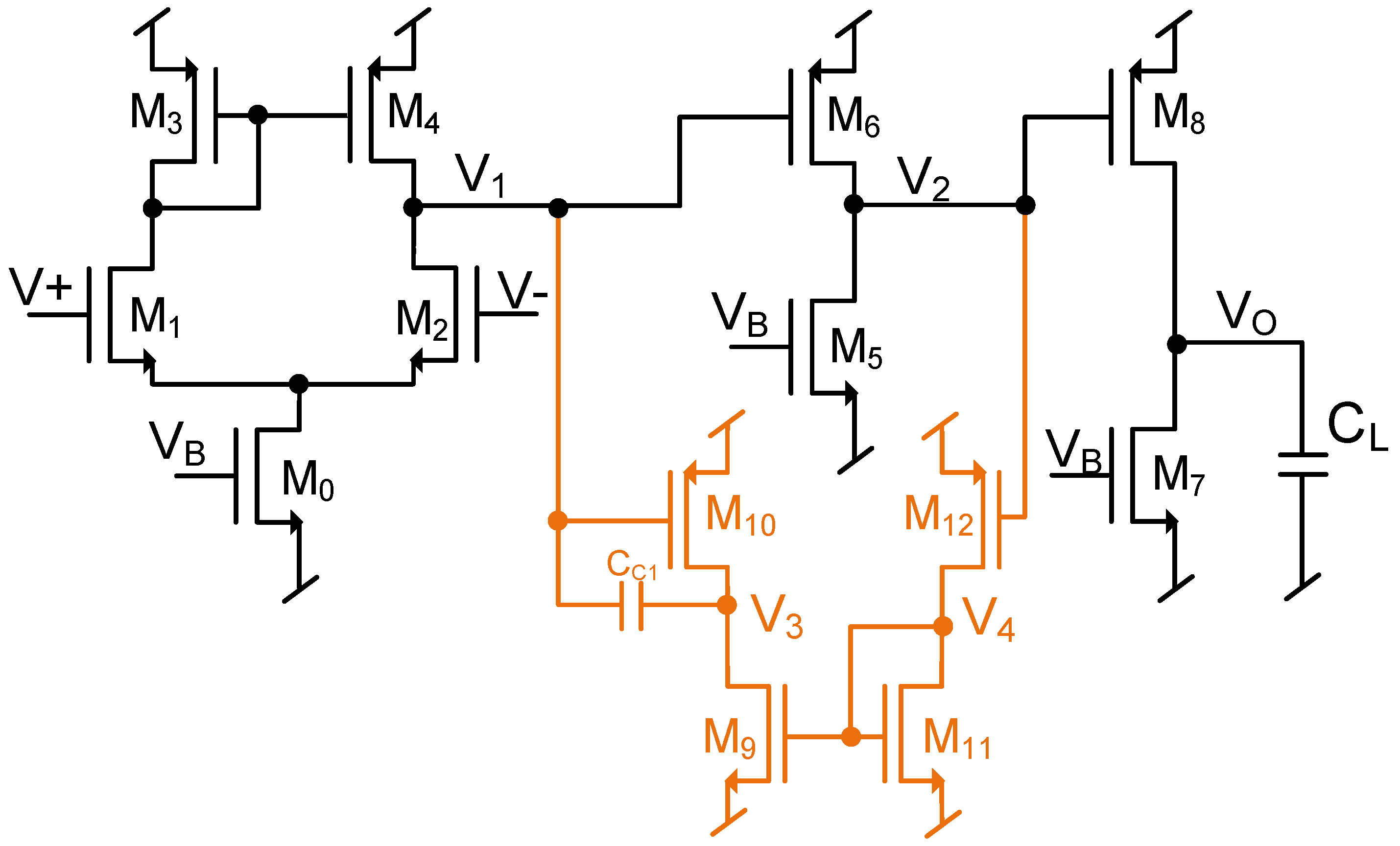 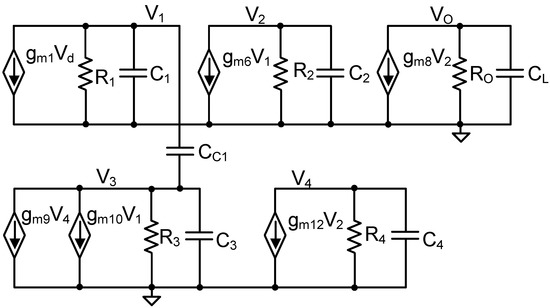 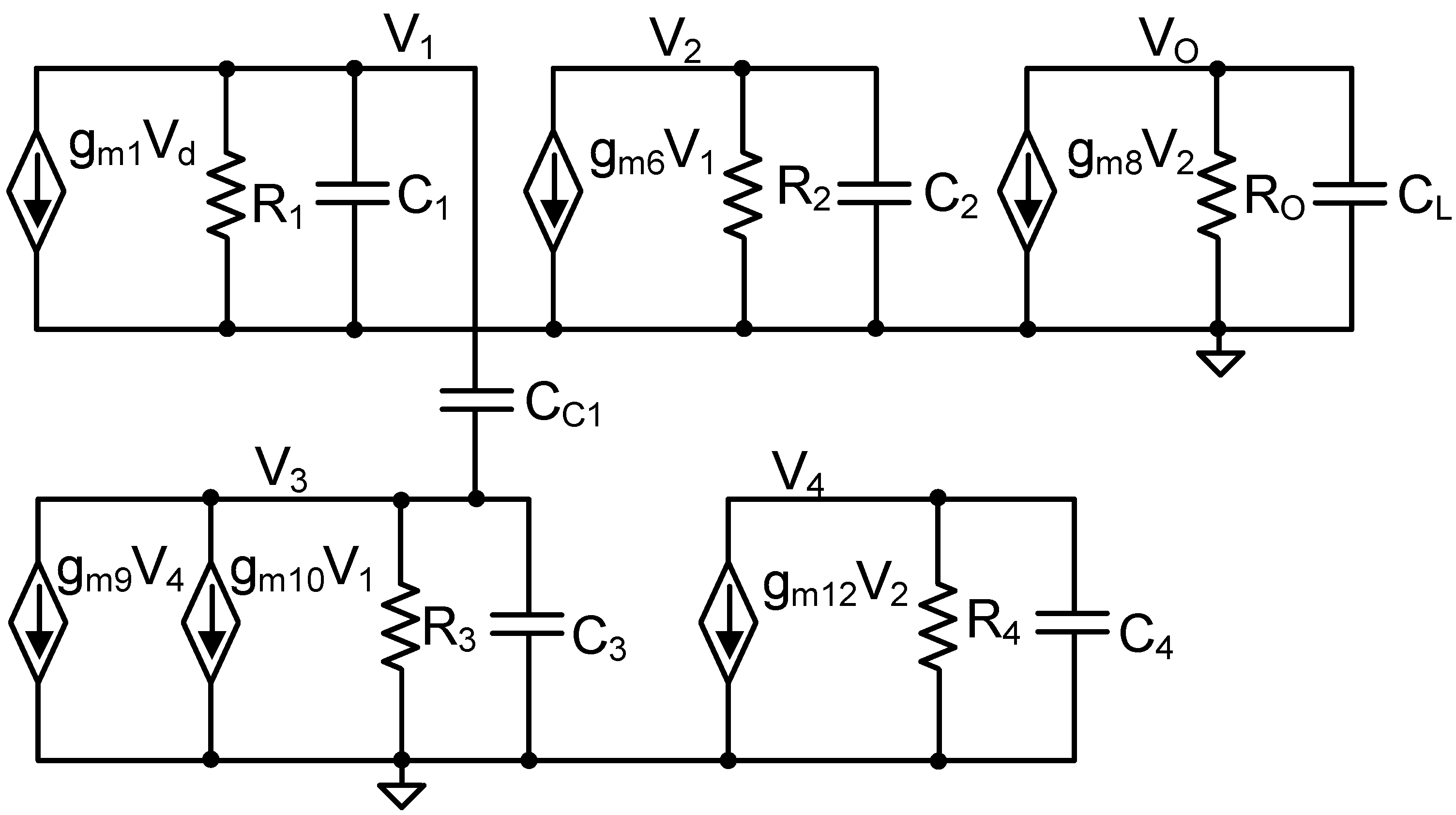 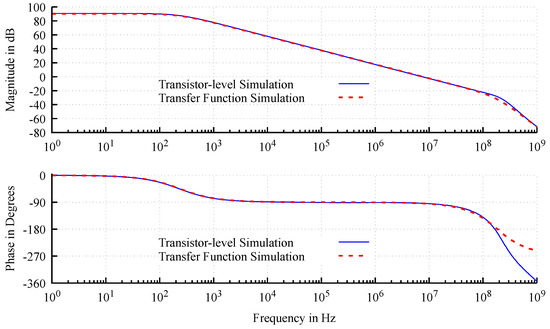 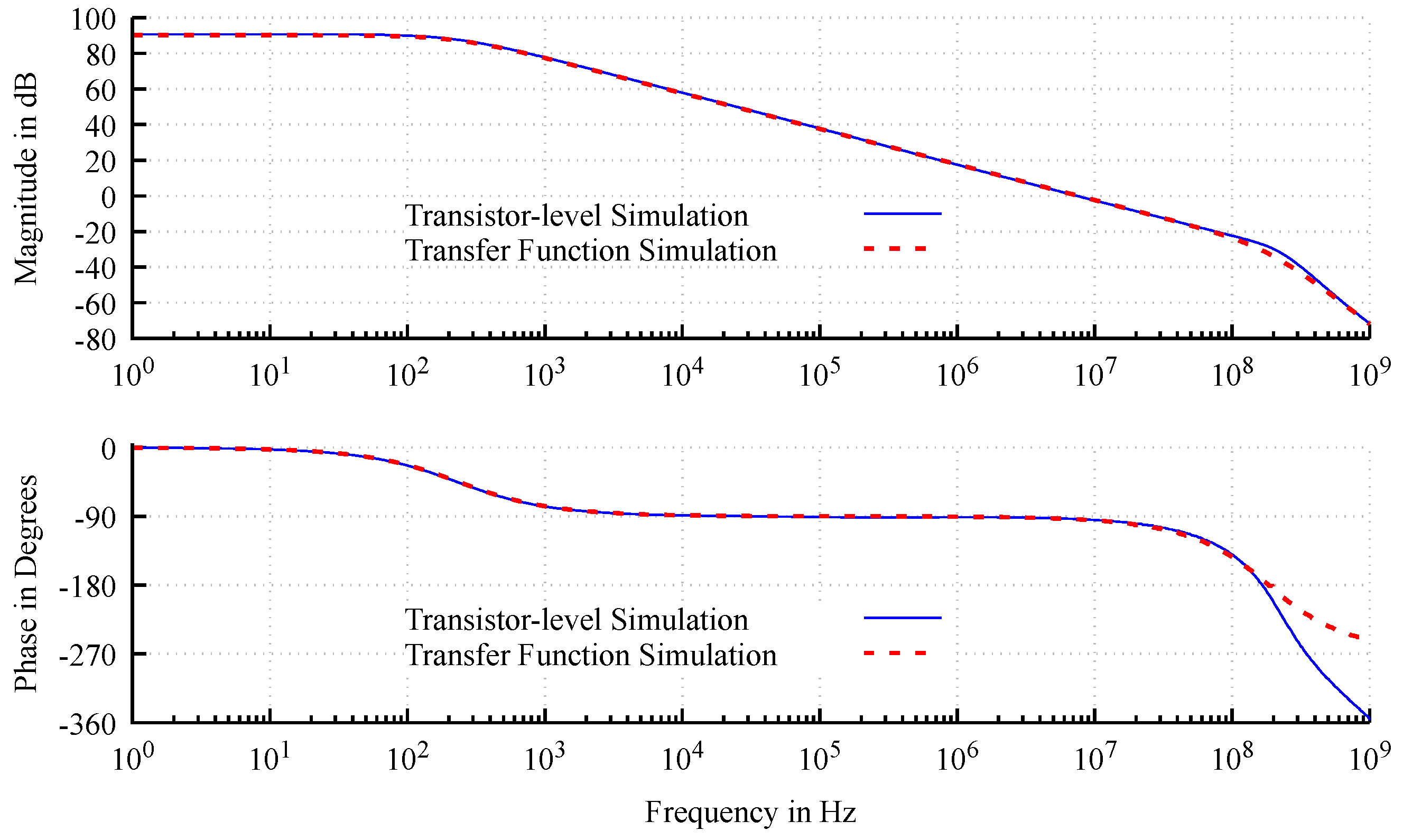 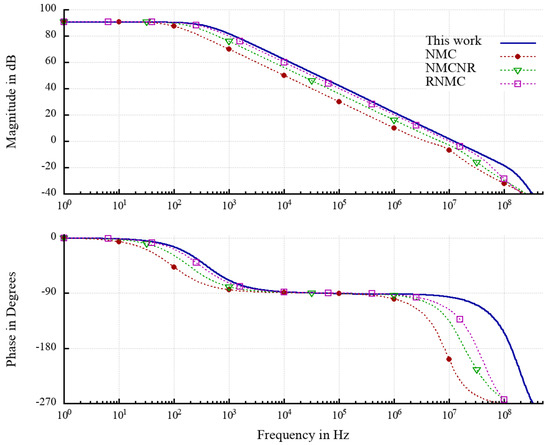 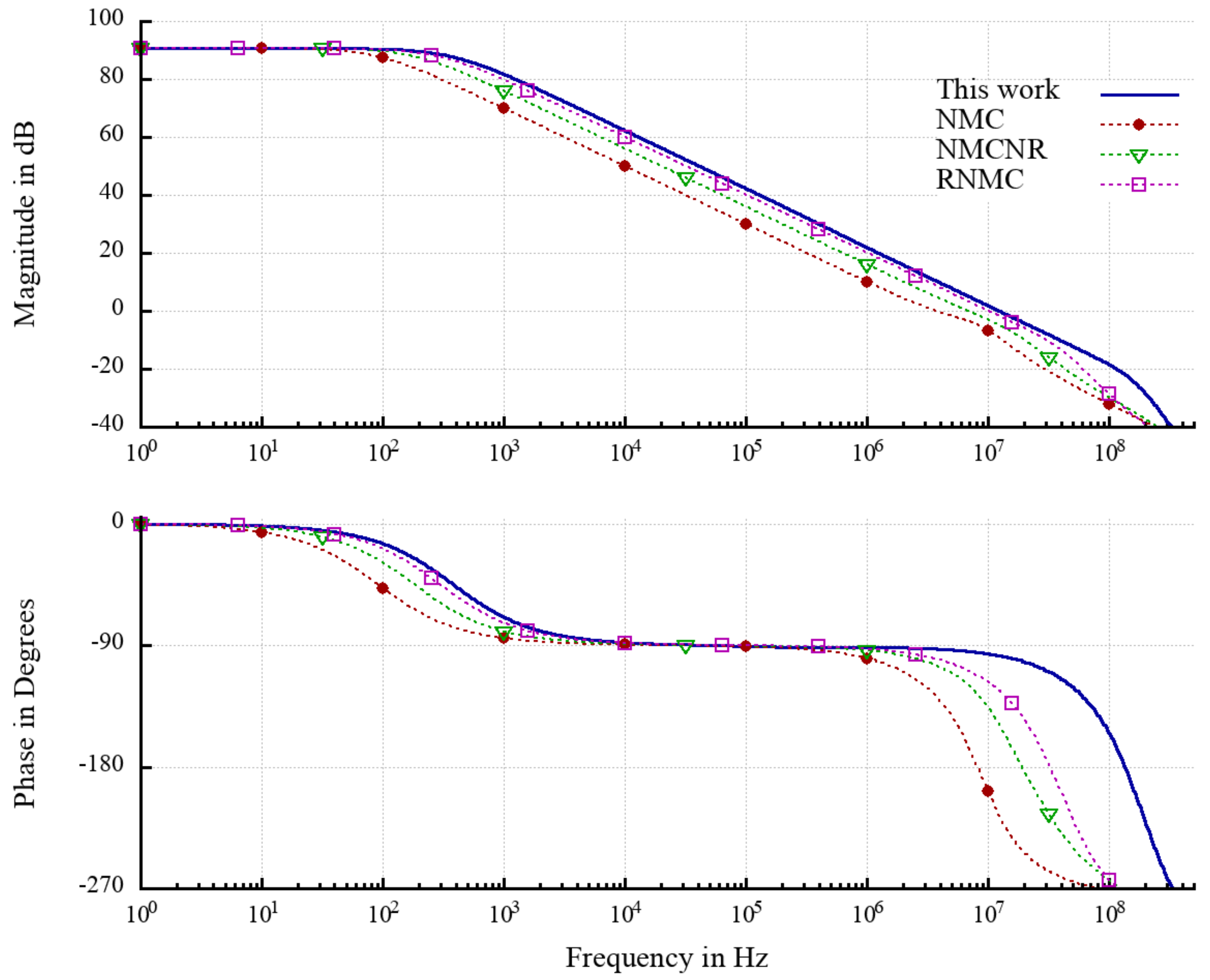 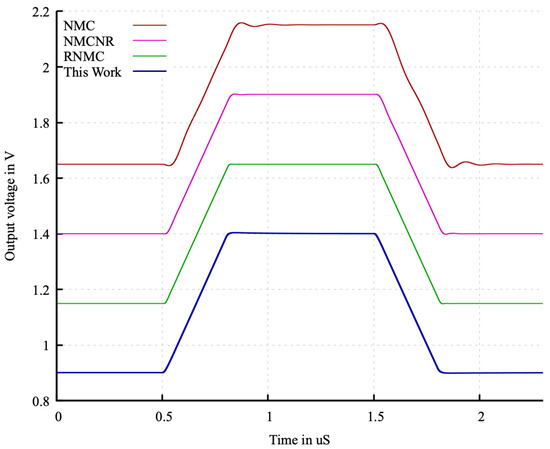 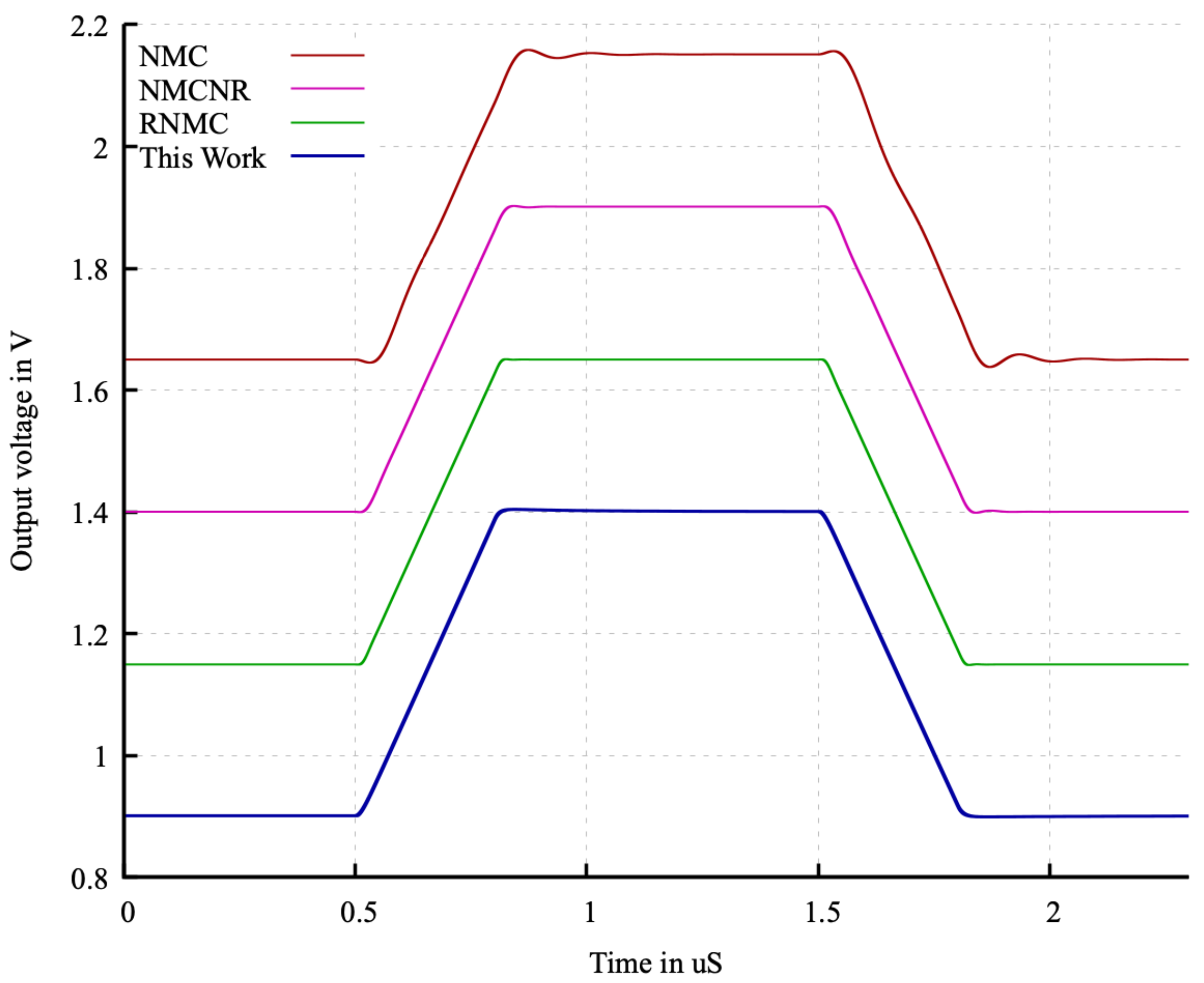 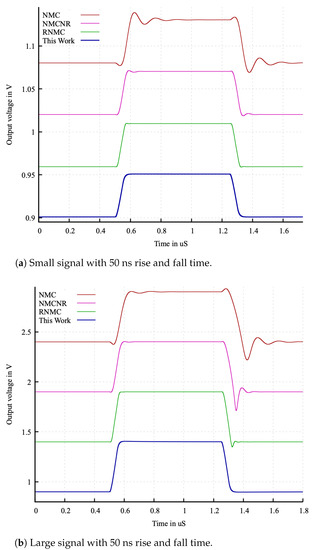 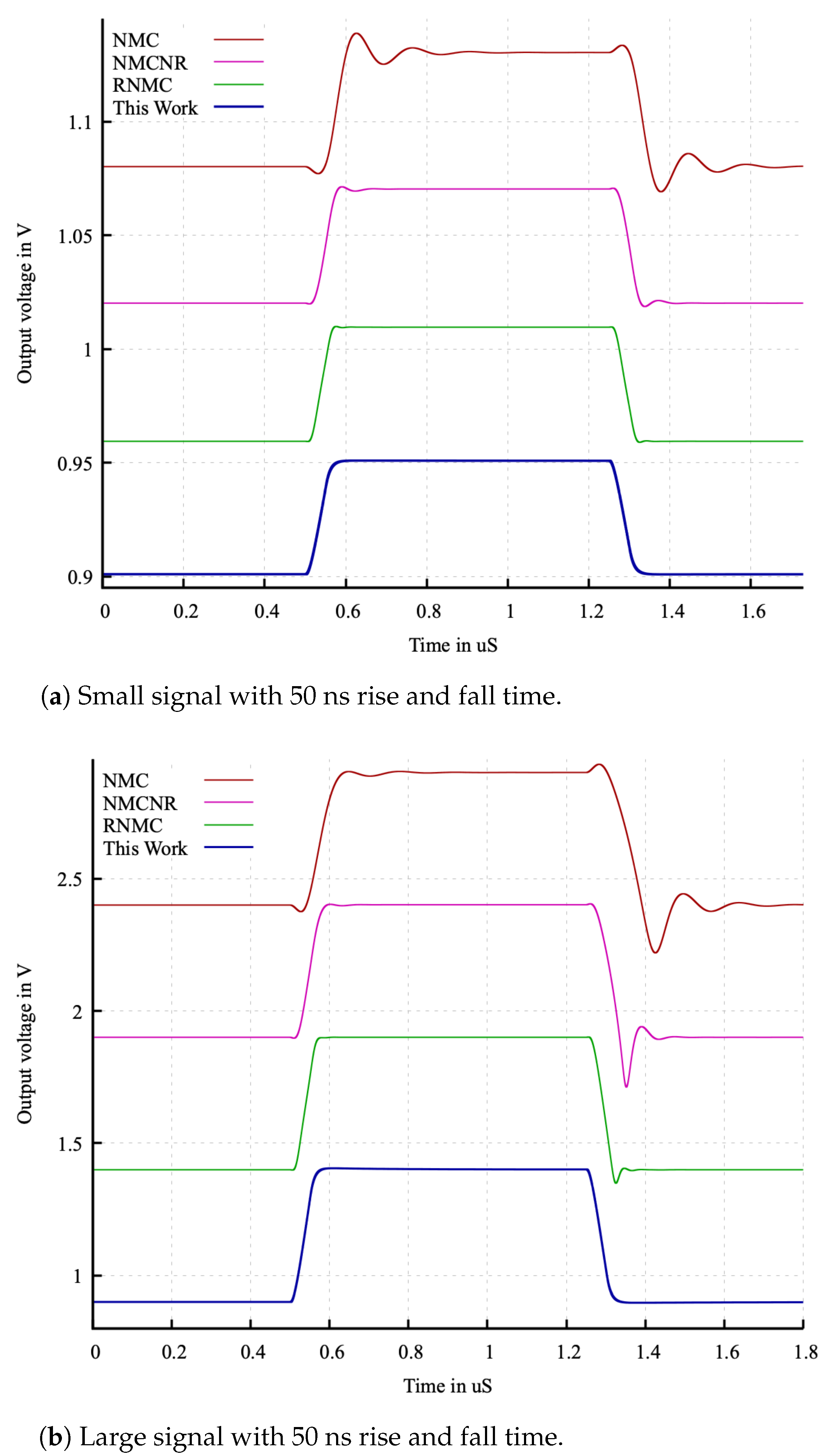 Table 4. Process corners at different temperatures.
Table 4. Process corners at different temperatures.
© 2021 by the authors. Licensee MDPI, Basel, Switzerland. This article is an open access article distributed under the terms and conditions of the Creative Commons Attribution (CC BY) license (http://creativecommons.org/licenses/by/4.0/).
We use cookies on our website to ensure you get the best experience. Read more about our cookies here.
Accept
We have just recently launched a new version of our website. Help us to further improve by taking part in this short 5 minute survey here. here.
Never show this again